Between the unexpected run to the round of 16 in the World Cup by the U.S. men’s national team and the upcoming 4th of July weekend, it’s an unusually patriotic week here at Contently HQ. (I don’t think I’ve ever yelled “AMERICA!” at coworkers so many times in my life.) And all that patriotism got me thinking: What’s more patriotic than branded content? After all, it combines two quintessential ‘Merican pastimes: entertainment and commercialism. So let’s celebrate 238 years of red, white, and BBQ with the best branded content of June.

While I’m in a very pro-America mood, that doesn’t mean I’m feeling pro-gun. And that’s why I’m all for this hilarious and surprising gun-safety PSA, which somehow features both kids and sex toys and yet doesn’t come across as the slightest bit creepy.

The approach by Evolve, a gun-safety advocacy group, was a risk, but a smart one; the video—which, despite all the sex toys, has a very clear gun-safety message—has garnered tons of press and 2.8 million views on YouTube in six days. Personally, I can’t wait for another brand to try and copy this strategy only for it to go horribly wrong.

I’m pretty sure every brand publisher on earth wishes that they had the liberty to just say, “Screw it,” and have their content strategy focus on cats. (Or dogs—Barkbox attracts 2 million monthly visitors with awesome canine content.)

That strategy sure has worked for Friskies, which partnered with Buzzfeed to create “Dear Kitten,” a video narrated by a cat who has begrudgingly taken on the role of mentor for the new kitten in his apartment. With over 13 million views so far, it’s already attracted twice as many eyeballs as last year’s breakout Friskies + Buzzfeed collaboration: “A Cat’s Guide to Taking Care of Your Human.”

The only downside is that if you watch this video enough times, you’ll start narrating your own dog’s inner thoughts constantly, and everyone will think you’ve been hitting the catnip a little too hard.

If you want evidence that branded content has gone mainstream, just look at how Nike has positioned its World Cup advertising behind “The Last Game,” an incredibly entertaining Pixar-quality short film that portrays a dystopian world where a legion of “perfect” super-clones have taken over the sport of football (soccer). In response, the best footballers on earth (Ronaldo, Howard, Neymar, Rooney, et al.) team together to win their sport back in an all-or-nothing match. The five-and-a-half-minute film is uplifting, visually stunning, and reminiscent of Space Jam, which is always a good thing. It’s been viewed nearly 60 million times in the past three weeks, making it ostensibly worth what must have been a considerable investment. Goooaaaalllllllllll!

The MLS may be overshadowed by the World Cup right now—heck, you probably didn’t even know their season is still going on—but the hip people of Vine and Snapchat probably do.

“Pro athletes are the closest thing we have to superheroes in real life. So using owned channels, MLS asked its “young, tech-savvy fans” last month to choose the superpowers of seven pro players. The league then employed old-school illustrators, Vine and Snapchat influencers to transform the seven players into superheroes with attributes like super speed and the ability to turn into a brick wall. Or, in the case of van Persie, to fly like the Man of Steel:

I’m a sucker for creative uses of Vine, so let’s look at one more example that gives old-school comic-book illustration a 2014 spin:

Now that’s an awesome and creative use of the nascent platforms. I could watch these all day (or at least for a couple minutes).

As we wrote earlier this month, The New York Times and Netflix raised the bar for branded and sponsored content with an excellent interactive longform feature about the myriad of problems plaguing the “invisible women” in an American prison system built for men. The article only promotes Netflix’s hit original series Orange is the New Black by touching on themes familiar to the show and using an orange color scheme—such as the orange prison jumpsuits seen above. It’s a fascinatingly sophisticated piece of content, and it sparked a lively debate at the Contently Summit two weeks ago.

One of the most powerful pieces of content this month is “Homeless Fonts,” a video from the Arrels Foundation. It tells the story of an initiative to create a collection of typefaces based on the handwriting of the homeless, which brands could purchase to use in their advertising and corporate announcements. Relying on video was the perfect way to tap into the social corporate responsibility movement to help those in need, and the clip is compelling enough to make this movement go viral.

Unilever—parent company of Dove and the Real Beauty campaign—has struck again with another masterful content effort, this time in Eastern Europe. For local Romanian brand CIF, they created an app that allowed the country’s citizens to take and upload a photo of offensive graffiti. Using GPS tracking, a CIF clean-up van would arrive at the location and scrub it clean—save for a small piece of CIF branding, of course. The video above claims 250,000 people visited the site and the campaign generated 1.2 million euros in earned media, which they calculated… somehow.

HelloFlo, a tampon subscription service, made a huge, um, splash last week with one of the funniest and best-written brand videos I’ve ever seen. It tells the story of a girl who fakes her period to fit in with all her friends, and in response, her mom throws her a “first moon party” as punishment. It’s racked up over 23 million views so far, thanks to lines like:

“Do you know how hard it is to find a uterus piñata?”

“Periods don’t have glitter in them.”

Those are just my three favorite. There are way more gems packed into this two-minute-and-nineteen-second video. As demonstrated by the gun-safety PSA above, the best way to spice up an otherwise-boring subject is with an edgy and hilarious storyline.

Finally, it’s worth revisiting a few great pieces of branded content from early June that I covered in my last roundup of “The Best Branded Content of May and Early June.” (I swear I’ll keep a consistent monthly schedule from now on. Pinkie swear.) In case you didn’t read the last piece or want a refresher, you can find those below: 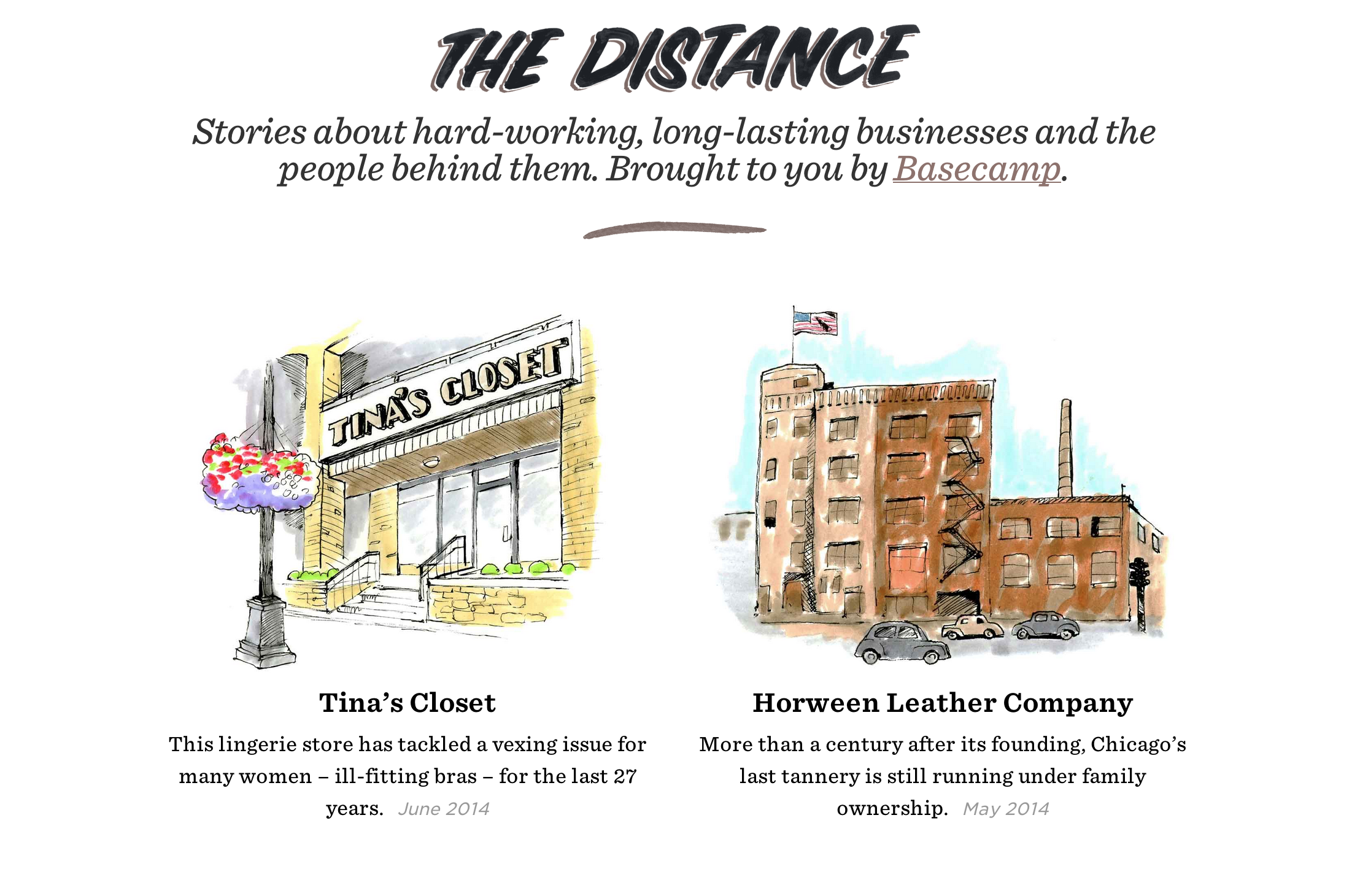 There was reason to be skeptical when Basecamp launched a magazine that actively shuns technology companies, choosing instead to profile old-school businesses bootstrapping and thriving for at least 25 years. (Basecamp has actively eschewed outside funding, so that’s why they’re into the whole bootstrapping thing.) It’s slow-cooked, longform storytelling, and the first two stories have been great: The first told the story of Chicago’s last leather tannery; the next was a fun profile of Tina’s Closet, a shop trying to save women from the perils of an ill-fitting bra. Basecamp claims the digital magazine—run by veteran journalist Wailin Wong—is editorially independent, and we hope to see the great pieces of storytelling continue.

Beats By Dre: “The Game Before the Game”

Usually, Beats videos show athletes walking into raucous road-game environments and shutting out the haters with their Beats headphones (Colin Kaepernick facing off against rabid Seahawks fans; Kevin Garnett strutting into MSG). However, this World Cup promo smartly mixes it up, splicing in the pre-game rituals of players and fans alike. (Spoiler: A lot of them involve wearing Beats headphones.) It’s emotionally resonant, and it works. And at this point, watching Beats hype videos before big games is starting to feel like a ritual itself.