‘Don’t Trick Them; Don’t Piss Them Off’: The Sponsored Content Debate Heats Up

When it comes to sponsored content, what counts as honesty? A large company logo placed prominently atop an article page? A “Paid Post” disclaimer? A change in font?

These questions were at the forefront of the “Truth in Advertising” panel that kicked off last week’s Contently Summit. And the most crucial part of the issue may actually be what wasn’t said. Though a lively debate around sponsored content has echoed across the Internet these past few months, there still aren’t widespread, agreed-upon best practices for labeling sponsored content.

Eric Goeres, director of innovation at Time Inc., advocated building an honest relationship with an audience by sticking to a simple principle. “Don’t trick them; don’t piss them off,” he said.

Preaching transparency isn’t new, but the issue is only getting more complex. Take “Women Inmates: Why the Male Model Doesn’t Work,” a New York Times post sponsored by Netflix to promote Orange is the New Black that, at first glance, seems to check off the necessary transparency boxes. Sponsorship is established at the top of the article, which has a different font, the page is marked as a “Paid Post” before the title and byline, and the article itself stands as a strong example of brand storytelling, detailing how women struggle in the American prison system. 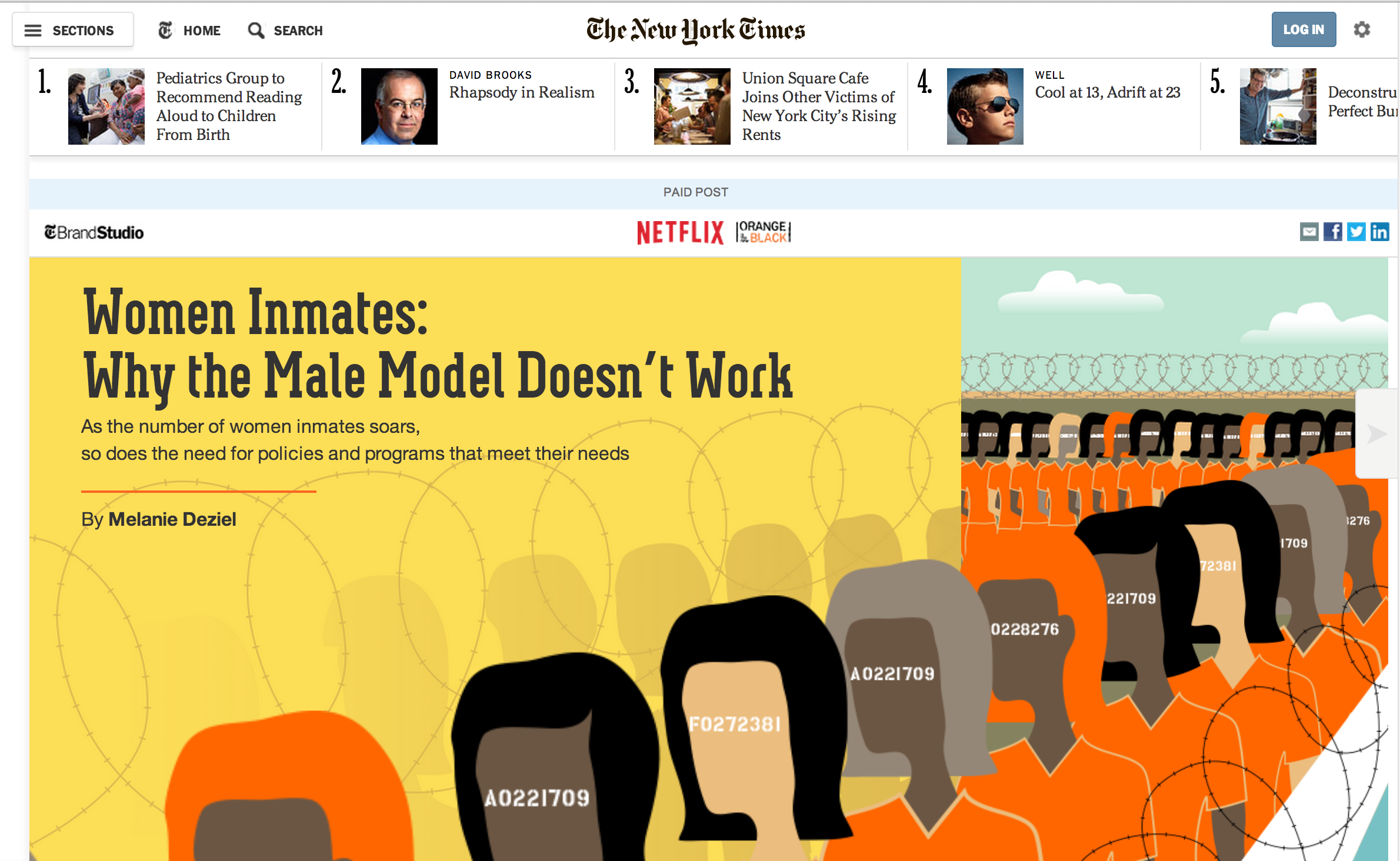 Yet, the piece sparked a discussion filled with more questions than answers. “Should the Times have written the story on their own?” asked Jeff Jarvis, director of CUNY’s Tow-Knight Center for Entrepreneurial Journalism. “Did they only have it because it was sponsored? Is this something I can trust that’s going to inform me, and how can I know that?”

Brands and publishers are still working out the kinks when it comes to consumer trust in their respective business models. The New York Times, however, has harvested some early benefits from their paid posts. As we’ve written about on this site, the Times’ sponsored content is just as popular as its editorial, which is even more compelling considering how much they went out of their way to show transparency from the moment they rolled out their paid posts in January with Dell.

“I think it’s important to keep in mind that everyone has biases. A newspaper has a bias. An op-ed page has biases…We all have biases,” said Meghan K. Graham, vice president of women’s content at Alloy Media. “I think that the more open we are about those things, the better off we’ll be. And I think that the bias brands bring to content is a new bias, but it’s in the open, and if we’re clear about what the best practices are for how we communicate with the biases, the better off we’ll be.”

For Netflix’s sponsored post about women in prison, that labeling took a backseat to clever stylistic choices. The Times spruced up the presentation for the piece, using orange text and orange prison uniforms that popped. Depending on how cynical the audience is, they can take these choices as smart marketing or subtle gamesmanship meant to trick the reader.

“Is this journalism?” Jarvis later asked the crowd.

He never got a reply beyond a very tepid yes. The panel brought up tough questions that still don’t have clear answers. Consumers seem to want the truth, and advertisers always talk about offering the truth, but the real question may be: Can both sides handle it?