Great News for Native: The New York Times’ Sponsored Content Is as Popular as Its Editorial

When The New York Times launched their paid-post offering last June, many wondered how their audience would react to sponsored content. As it turns out, Times readers are spending roughly as much time on paid posts as editorial content, according to Meredith Levien, executive vice president of advertising.

As an example, Levien, speaking last Wednesday in New York at the American Association of Advertising Agencies’ public relations forum, pointed to a United Airlines interactive graphic—produced in partnership with the Times—that showed how far athletes traveled to compete at Sochi. The result was nearly 200,000 clicks—well above the average editorial article.

”Brands are storytellers and they’re going to tell stories that are tied to what’s happening in the news,” she said.

So do native ads really work?

Levien’s announcement isn’t just a score for the Times’ bottom line, but sponsored content itself. Sponsored content was recently dealt a blow when Chartbeat CEO Tony Haile reported that just 24 percent of people scrolled down the page on sponsored content, versus 71 percent for traditional content. 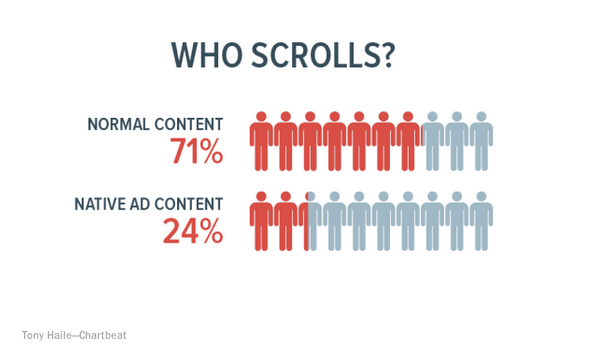 In addition, according to analysis by TheMediaBriefing, the average sponsored post on BuzzFeed receives over 4,200 social media interactions, with some receiving over 50,000 interactions. And BuzzFeed’s case studies report brand lift upwards of 350 percent as the result of its sponsored content campaigns.

The future of paid posts at The New York Times

The Times appears positioned to continue this run of success. The Gray Lady is sharing not only its audience and platform with advertisers, but also its “storytelling tools and standards,” Levien said. Like publishers including The Atlantic, Forbes, and The Wall Street Journal, the Times’ native advertising is overseen by an in-house “content studio.”

“The same tools and techniques that the Times is using for its multimedia journalism—video, interactive graphics, data visualizations and the like—will be available to advertisers,” wrote Public Editor Margaret Sullivan in January.

Allotting such time and talent, to say nothing of space, means the Times can charge the big bucks. AdAge reports that Dell’s three-month campaign cost a solid six figures, including banner ads.

In all, eight advertisers have bought into the offering, with more lining up to do so, according to The Wall Street Journal. All of this puts the Times well on its way to reaching the lofty tens of millions in advertising revenue projected by Chief Executive Officer Mark Thompson when the Times announced their native advertising plans in December.

A win for transparency

The Times’ success certainly appears to be a win for proponents of branded content transparency. One could even speculate that a reason their paid posts have been so successful is that readers know exactly what they’re clicking on. The powers that be have made sure of that.

Besides being offset with a light blue background and a different smaller font, paid posts feature the advertiser’s logo upfront and center along with a disclaimer stating that the post has been paid for by the advertised company. Even the URL changes, shifting from NYTimes.com to PaidPost.NYTimes.com.

“As advertorial as native gets,” the Financial Times’ Alyssa Zeisler tweeted when The New York Times debuted its inaugural campaign with Dell.

Stephanie Losee, the managing editor at Dell, explained the philosophy behind the partnership this way in a piece for The Content Strategist: “Sneaking advertorial by unsuspecting readers wasn’t our goal.”

“Metrics show audiences click on and share great content, no matter who pays for or publishes it,” she added. “Don’t be afraid to explain who paid for it. And, let us remember, advertisers paid either way.”

So far, it appears that approach is paying off.