There’s a new “Snow Fall” piece in The New York Times today, and it tackles an important topic: the demand for policies and programs that meet the needs of women in prison.

The interactive piece, “Women Inmates: Why the Male Model Doesn’t Work,” flows gorgeously as you scroll, presenting moving images, infographics, video, and audio clips that synchronize with the text to immerse you in the issues faced by incarcerated women.

Indeed, “Women Inmates” was commissioned by Netflix to promote the second season of its hit series Orange Is the New Black, and was written by Melanie Deziel, an editor at the Times‘ brand studio.

Aside from a banner at the top and link at the bottom, Netflix and Orange Is the New Black are each mentioned only once in the middle of the feature: “In an August 2013 op-ed in The New York Times, Piper Kerman, author of the prison memoir Orange Is the New Black, which inspired the Netflix series of the same name, calls the distance between women prisoners and their families ‘a second sentence.'”

But the issues presented in Orange are present throughout, along with elements of the show’s color palette—most notably the infamous orange prison uniforms.

With “Women Inmates,” Netflix is unabashedly breaking boundaries between marketing and editorial, doing something that no entertainment property has ever done before: getting their intellectual game on with supremely smart editorial content and putting it in front of the Times‘ ideal audience.

Netflix has proven its interest in producing groundbreaking content with OITNB‘s diverse, predominantly female cast of characters, who take us into their worlds and show us how messed up the prison system can be. But by sponsoring their own content on The New York Times, and featuring the real-world counterparts of the fictional women we’ve come to love on the show, Netflix makes a move to lead this discussion in a big way, and demonstrates how serious they are about the issues surfaced by the series.

Still, this is just one of several components that makes up Netflix’s nuanced campaign for Orange Is The New Black.

This week, the streaming video platform is sending a “Crazy Pyes” food truck around New York City to hand out free pies and chocolate-and-vanilla-swirl ice-cream cones to fans. The sweets are a nod to the hilarious quotes from beloved character Suzanne “Crazy Eyes” Warren during the show’s first season. The truck made its debut run in Mexico City and will be moving onto other locations (to be announced) after touring New York. 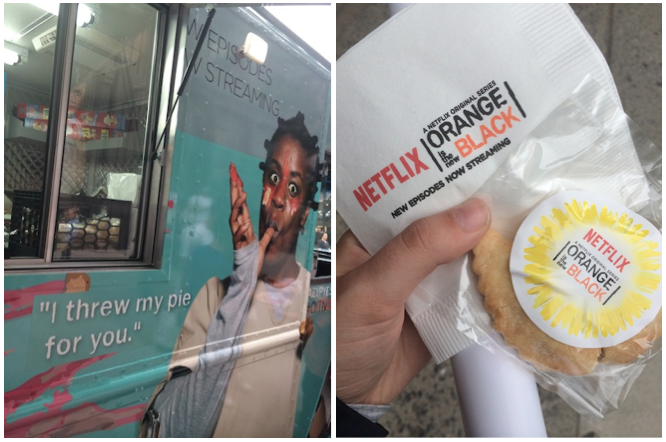 Going mobile, Netflix launched the OITNA— or Orange Is the New App—a (you guessed it) mobile app that lets fans customize digital cards with templates that include popular characters, phrases, and memes from the show. The cards can then be shared on Facebook, Instagram, Twitter, WhatsApp, and more. 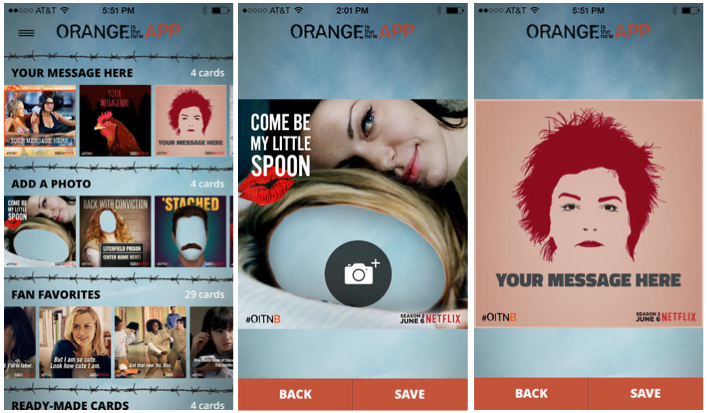 The social media minds behind OITNB have also been experimenting with Instagram video, running 15-second Q&As with the stars, shout-outs to fans, sneak peeks of the new season, and behind-the-scenes looks at the cast’s tour of hot Internet HQs. And it looks like it’s been working. Buzz about OITNB‘s second season dominated social media, trending harder than Netflix’s other star-studded original series, House of Cards.

Aside from mentioning that entertainment brands would be wise to learn from Netflix’s major marketing movies, there’s only one way to finish this piece: with some much-expected riffs on the “___ is the new ___” phrase. Ready? Internet is the new cable. “Snow Fall” is the new web page. And Netflix is the new queen of entertainment content marketing.