I combed through hundreds of pieces of branded content researching this piece, and I must say, at no point was I tempted to quit my job at Contently and relocate to the remote jungles of Central America.

A few years ago, I’d probably be singing a different (Spanish) tune. Brands used to have a tenuous-at-best grasp on editorial content, but today, thanks to an influx of professional journalists and the shining examples set by brand publishers like Red Bull, Chipotle, and GE, that’s no longer the case. As you’ll discover below, some brands are really getting the hang of the media business.

Disclaimer: I tried to represent a wide range of content formats and strategies, but there are almost certainly great pieces of branded content missing from this list. Besides, consuming all branded content from a three-and-a-half-month span would have seriously crimped on my Game of Thrones binge.

Speaking of GoT—I can’t remember the last time a brand hijacked a pop-culture phenomenon as beautifully as Hootsuite did with “Game of Social Thrones.” The parody is perfectly crafted to appeal to its target audience of social media nerds with a slew of inside social jokes: Twitter’s ivory tower, LinkedIn’s walled city, Facebook’s vaguely terrifying industrial campus.

Best of all, the Hootsuite branding isn’t intrusive or tacked on. Instead, it serves as a big reveal at the very end. 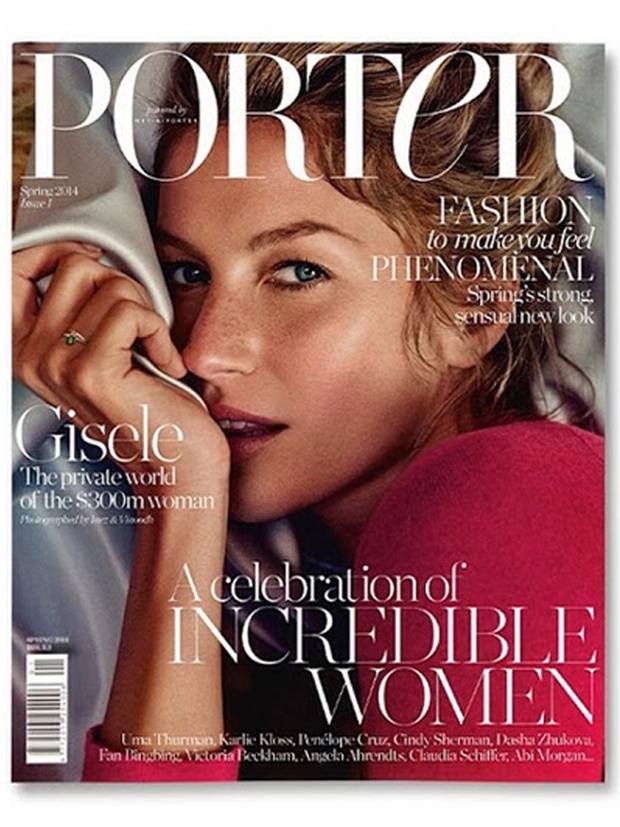 “The devil wears Prada,” wrote The Independent, “but may just fear Porter.”

In early February, luxury online retailer Net-a-Porter launched Porter, its gorgeous glossy print mag, at newsstands across the world. With supermodel Gisele on the cover and spreads featuring Angela Ahrendts and Uma Thurman, it was hard not to take notice. The masthead was arguably even more impressive. Lucy Yeomans, former editor of Harper’s Bazaar U.K., serves as Porter’s editor-in-chief.

With an initial print run of 400,000 copies—almost six times the distribution of Newsweek—Net-a-Porter threw down the brand publishing gauntlet from the get-go.

“We’ve talked about how the Net-a-Porter Group is actually not just a retail company, but it’s a media company,” Natalie Massenet, Net-a-Porter’s founder, told the Business of Fashion. “And if we’re a serious media company we couldn’t ignore one of the most important existing media, which is print.”

The LEGO Movie—a $200 million blockbuster—was actually a savvy piece of branded content. Although LEGO put out a manifesto declaring, “We are not making a commercial for the toys,” the brand was an integral part of the filmmaking process, reports Fast Company, and exerted extensive approval over the content.

The result was arguably the most successful piece of branded content of all time, or, as director Phil Lord described it, “a soulful cash grab.”

You might be asking, “Wait, why is a commercial on this list?” until I make you watch Budweiser’s video 10 times in a row and you’re sobbing with joy. You’ll also be filled with regret that you ever doubted a love story between a Clydesdale and a puppy and, behind the camera, an ice cold beer they can consume responsibly.

It’s a simple, effective narrative and scored an emotional sentiment index of 83, 46 percent higher than the average Bud ad. And it’s delighted 50 million people on YouTube so far.

It seems logical for a social media sharing app to create shareable content, but doing so is harder than you’d think. Buffer has built a blog that bigger brands would kill for, and their average post gets shared over a thousand times. A few weeks ago, we profiled how they have created such a massive audience. Check it out.

Oscar Mayer’s “Wake Up and Smell the Bacon” App

The app works courtesy of a dongle, and Digiday’s Brian Morrissey described it as being “like Square but totally awesome and delicious.” The bacon-loving brand invited fans to enter a contest to win one. Sadly, I lost. 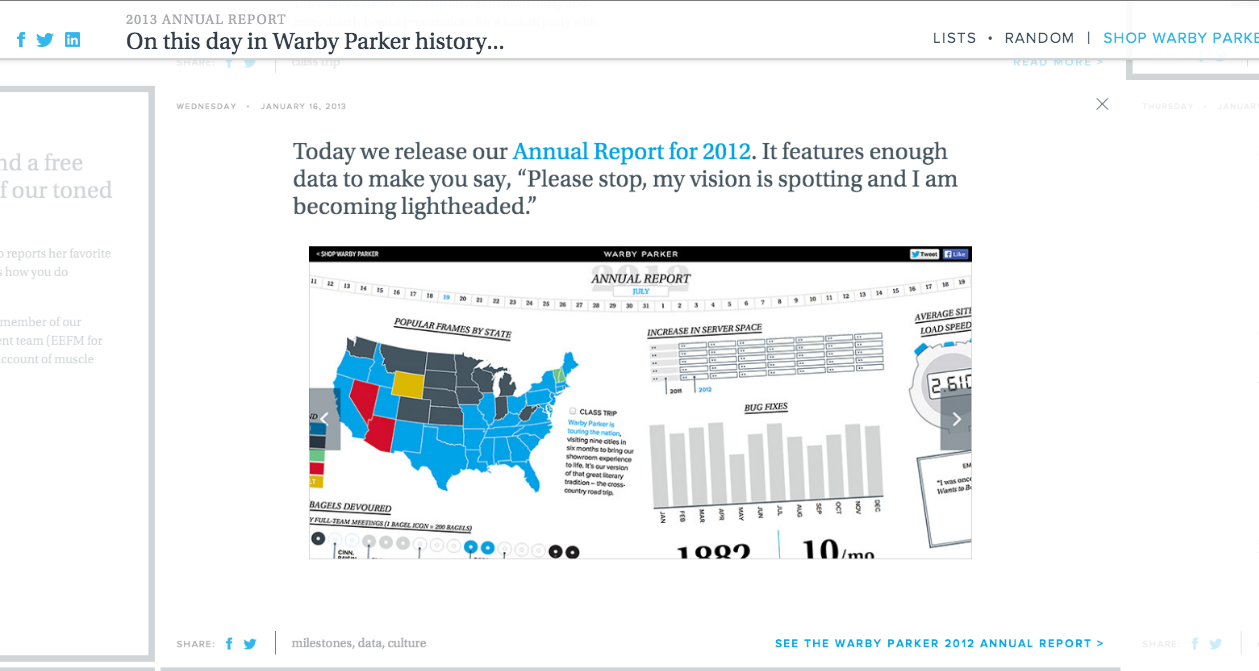 Making cheap eyeglasses hip isn’t easy. Making an annual report hip is even harder, but Warby Parker arguably pulled off the exacta with the second edition of their annual report. In one of the examples available of brands benefitting from storytelling, the literary-minded eyeglass retailer created an elegant calendar that explained what the company did every day during 2013.

For more analysis on why the calendar rocks, read Forbes’ “12 Lessons From Warby Parker’s Annual Report.”

GoPro has earned their 1.8 million YouTube subscribers by mixing user-generated footage shot with GoPro cameras (like the awesome trick-shot video above) with the company’s own professional content (like this stunning promo video for the GoPro Hero 3+ that’s been watched over 30 million times).

Everyone points to Red Bull’s YouTube page as the best in the business, but GoPro may have them beat, especially considering their videos are shot with their own products (try shooting a video with an energy drink). After getting seduced by GoPro’s clips, you’ll want to fork over $399 for the GoPro Hero 3+ (and take up scuba diving, snowboarding, and drive-by basketball). 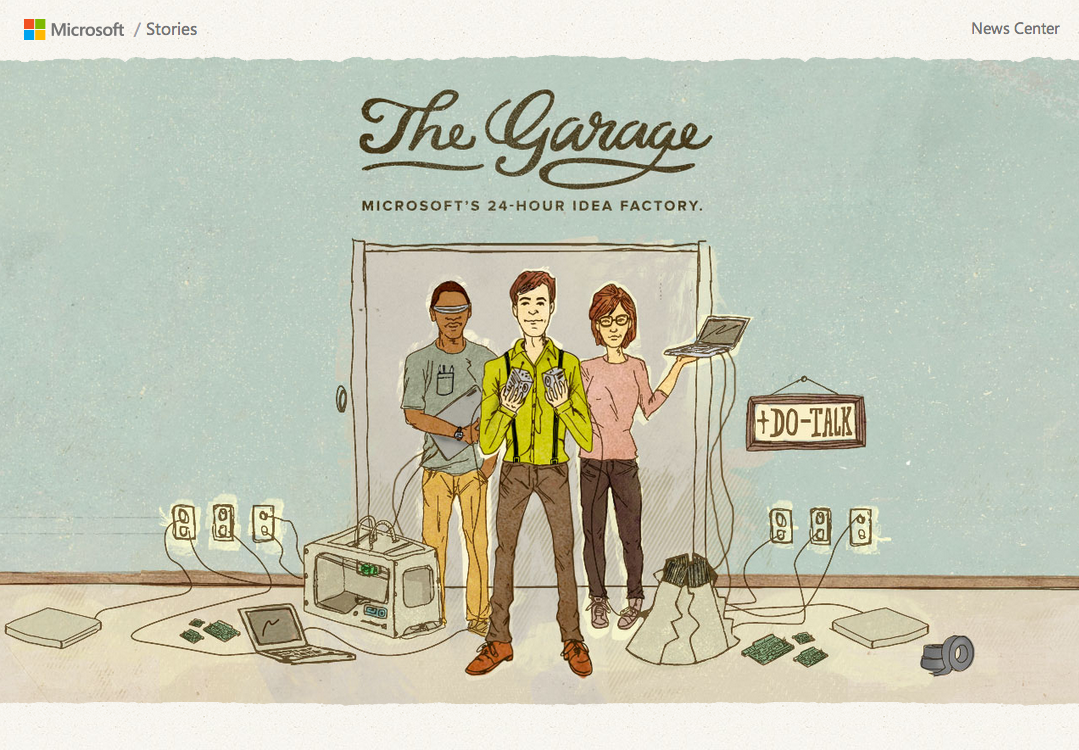 Telling stories about the work your brand is doing without coming across as cocky or self-promotional is a huge challenge. So far this year, though, Microsoft has been covering their own fascinating work with a deft touch. The design of Microsoft Stories is sleek and splendid; the homepage features big, vibrant images; and the article pages echo Medium’s design, with some “Snow Fall” thrown in for tasteful measure.

The writing is just as rich. Jennifer Warnick, in particular, crafts the kind of narrative you’d expect in The New Yorker, not on Microsoft.com. For further reading, be sure to devote some time to “The Garage: Microsoft’s 24-Hour Idea Factory,” and “88 Acres: How Microsoft Quietly Built the City of the Future.”

Forget the soap opera; it’s all about the burrito opera. (I’ll take mine with sour cream and a sense of regret!) Chipotle aired a four-episode web series on Hulu beginning in February, and though it wasn’t Breaking Bad, it was quality entertainment, scoring an 8/10 rating on IMDB.

The series is a jabbing satire of the agriculture industry and capitalizes on Chipotle’s unique place in the fast food industry. The company was the first American restaurant chain to reject antibiotic-raised meat and is now in the process of banning genetically modified foods, fully committing instead to locally grown produce. Though those efforts may be overstated, “Farmed and Dangerous” brilliantly promotes Chipotle’s unique value proposition to consumers in a—ahem—organic manner. The press the web series generated was worth well more than its $1 million production budget.

Twixt’s “Which Absurd Consumer Psychographic Are You?” Quiz

Twixt, an RFP processing app, recently made what might be our favorite piece of branded content of the year. It may be a rip off of BuzzFeed, but it’s more entertaining (and well-written) than any BuzzFeed quiz we’ve ever seen. Check it out. I got Schaffer, “The millennial guy who loves guy stuff.” The copywriting for him (below) is both hilarious and disturbingly accurate. 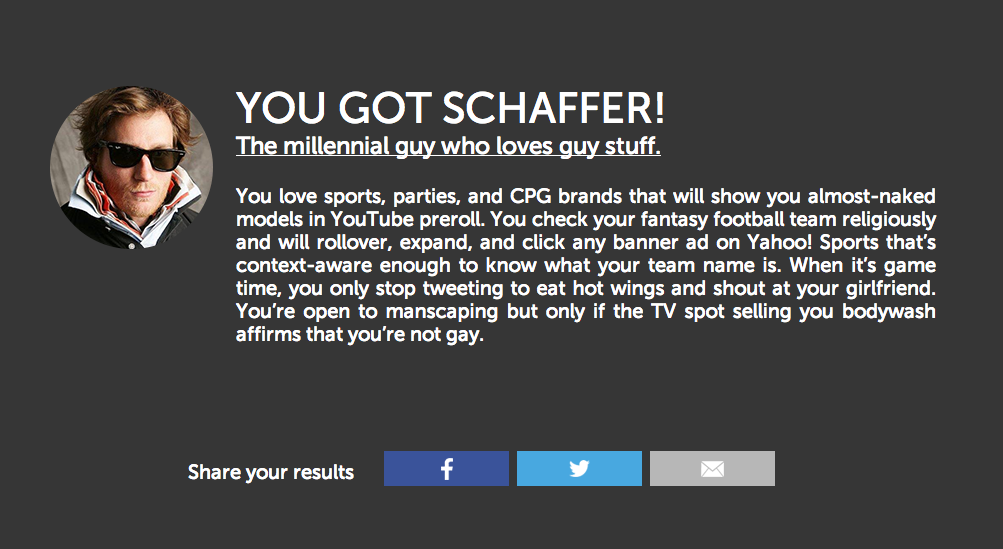 Red Bull’s “Days of My Youth”

Late in 2013, Red Bull Media House and MSP Films released the trailer for “Days of My Youth,” its much-anticipated ski film coming this fall. They’ve continued to slowly tease episodic clips from the film that have racked up over 600,000 views on YouTube thus far—and likely many more on its website’s native player. When your brand’s content generates this much anticipation, you know you’ve made it.

Dissolve’s “This Is a Generic Brand Video”

What better way to end “The Best Branded Content of 2014 (So Far)” than with a parody of brand videos? Dissolve, a stock footage site, took Kendra Eash’s hilarious “This Is a Generic Brand Video” poem from McSweeney’s and turned it into a hilarious brand-video parody using their own stock footage. Enjoy it for three minutes, and then rethink your career for the next three months.