Led by brands like Ford, GE, HP, and Kimberly-Clark, marketers are expected to spend $4.3 billion on this form of integrated branded content in 2015—an increase of 34 percent over 2014. Sixty-nine percent of marketers believe “native advertising is valuable,” and 70 percent of Internet users say they would rather learn about new products through content than traditional ads. Nearly three-quarters of publishers in the U.S. now offer native in some form. And the industry could be worth $8.8 billion by 2018.

Despite these impressive numbers, native advertising as it looks today is just a few years old. But through a combination of journalistic rectitude and marketing chops, media brands have managed to reinvent sponsored content, engaging consumers in ways that online ads couldn’t before.

Best practices, however, are hard to come by, and a formula for universal success remains even more elusive. That’s largely because native ads are idiosyncratic by nature, with each one not just uniquely fashioned for the advertiser but also for the site on which it appears. Below, we outline the unique approaches that five major publishers have taken to developing sponsored content.

GIVE BRANDS A VOICE

The answer may lie with publishers like Forbes, one of the first to offer ads deeply integrated with editorial content. Forbes launched BrandVoice, its content-sharing platform, in 2010. Across BrandVoice Digital and Print, it has a combined count of 71 partners to date, 66 of which post content online. “We had a pretty early start,” says Claire Robinson, Forbes‘ senior director of brand media production. “We saw that everybody on the Internet can have a voice, and it isn’t always relegated to news providers. People have blogs and social, and marketers are in that group as well. Why not let them speak?”

The digital side of the Forbes cross-platform content marketing program allows brands to create articles, image galleries, infographics, videos, and thought leadership pieces that live on Forbes.com. Ad partners can choose to create their own content, as Fidelity and IBM do, or have it created for them. Forbes staffs both journalists and marketers, and also pulls in external content developers with the right expertise for each campaign. This year alone, BrandVoice Digital has worked with 51 active partners to generate 18 million pageviews and 1.7 million social actions and referrals.

“Since day one, the philosophy has been that brands have interesting things to share,” Robinson says. “Brand content doesn’t have to mean that the integrity of the publication is somehow compromised.” To ensure that said integrity remains intact, BrandVoice pilots and oversees the work. It’s the brand, though, that takes ownership of what is shared.

At BuzzFeed, things work a little differently. Like Forbes, BuzzFeed started developing sponsored content in 2010, shortly after it began giving articles and Internet-friendly formats like listicles equal weight. Unlike Forbes, however, BuzzFeed chose to keep all native ad development in-house. Its content marketing team has grown to 70 people, with strategists, creative developers, designers, and animators working from New York, Los Angeles, the U.K., and Australia.

“We made a conscious decision a long time ago not to contract out creative, the reason being that it takes a lot to understand the BuzzFeed tone,” says Melissa Rosenthal, senior director of creative services at BuzzFeed. The content team is therefore trained on BuzzFeed-appropriate language and what users expect of the site.

Of BuzzFeed’s native ad development process, Rosenthal says, “It’s always a conversation.” Some brands arrive knowing exactly what they want, while others want a more collaborative experience. Either way, BuzzFeed incorporates its unique breed of viral expertise to create “sharable content that’s on-brand.” Social listening, industry knowledge, and insight into what has worked for clients in the past all guide the creative process.

Native ad content at the Huffington Post is produced by HuffPost Partner Studio, an in-house creative agency for branded content that was launched in 2013. The studio operates much like the publication’s ad department, but specializes in finding each brand’s distinct message and building engaging pieces that don’t interrupt the editorial flow.

The team is divided into pre-sale and post-sale groups. Like Forbes and BuzzFeed, it’s also comprised of both strategists and journalists.”We wouldn’t be able to understand the nuances of our clients if we didn’t have people who understand [editorial and marketing],” says Jessica Leader, senior content strategist at the Huffington Post.

When parent company AOL receives an RFP from a client, the pre-sale team begins to brainstorm ideas that meet the client’s KPIs and work for both advertiser and publication. The brand lays the foundation that the Huffington Post builds on to create a native offering.

The ultimate goal, Leader says, is to align the brand’s messaging with the publication’s editorial content.”If something doesn’t feel right, we’ll push back on that to make sure our integrity is intact. Our integrity is our biggest currency.” 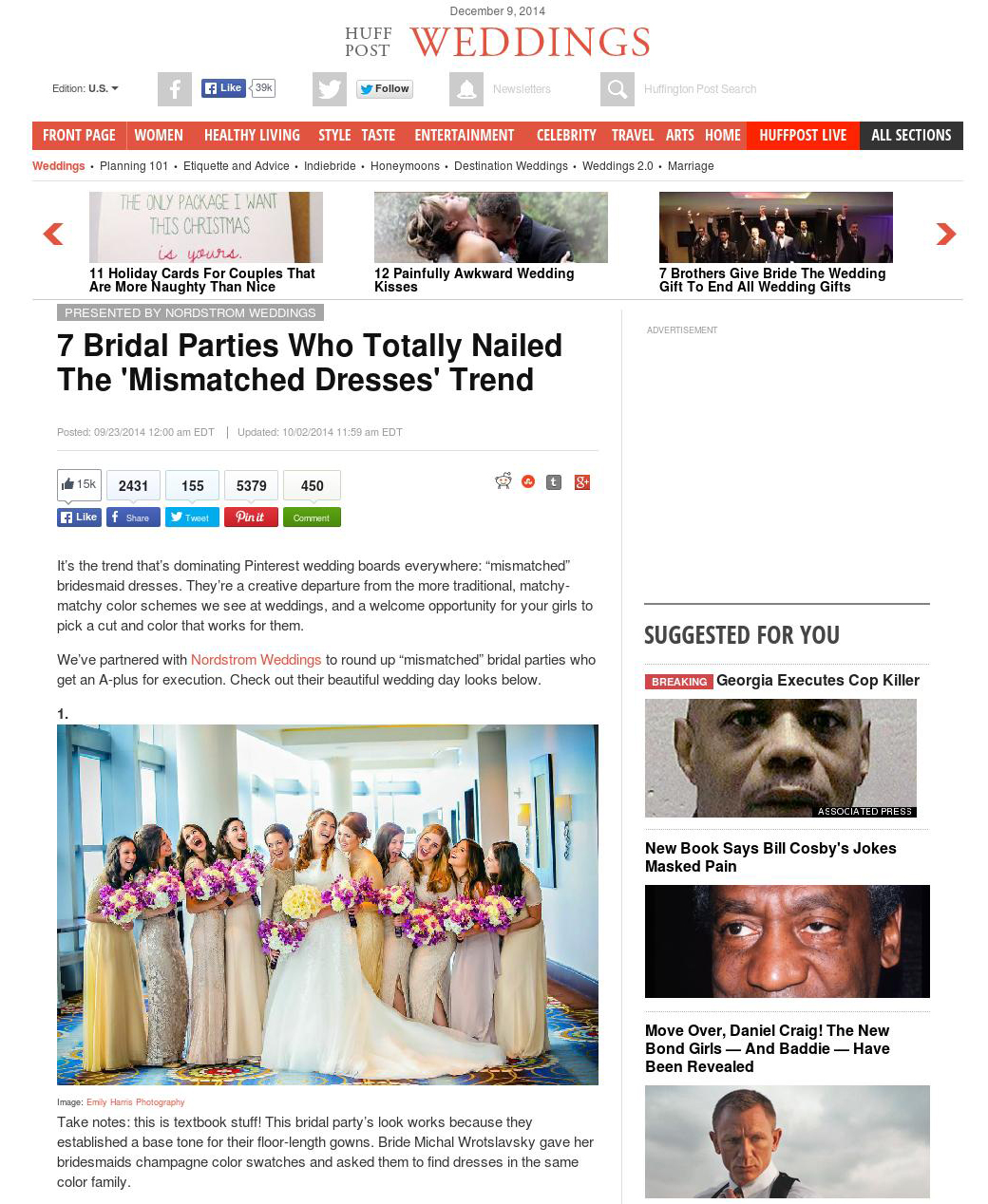 For major publications, custom content studios are a popular approach. The New York Times has T Brand Studio, which was formed earlier this year and has already produced paid posts like “Women Inmates: Why the Male Model Doesn’t Work” for Netflix, “Grit and Grace” for Cole Haan, and “Extraordinary Journeys—the Creekmores” for Holiday Inn. The distinguishing characteristic of T Brand Studio’s team is that it has no marketers—like the Times‘ newsroom, it’s made up of editors, designers, video producers, and developers, with support from social media and analytics teams.

According to Adam Aston, editorial director of T Brand Studio, its approach to developing paid posts varies. If a client wants to highlight a study or corporate research, that takes center stage. In the case of Netflix, T Brand Studio was tasked with conceiving relevant content. “That conversation started with a more marketing approach: to find something about the show that is really of interest to people,” Aston says. “As we looked at the issues it became clear there was a newspaper story in prison reform. That’s a legitimate story.”

Indeed, if each of the Times‘ paid posts have anything in common, it’s that they all tell a story, whether in the form of data visualizations and videos or longform feature. That accounts for the abundance of journalists on T Brand Studio’s team—along with the clear delineation between the paper’s editorial and advertising staffs.

“For the Times, the perception of influence is too risky, too fraught,” Aston says of the divide. “We can take the best practices of the newsroom in terms of design and approach, but use our own separate laboratory of creators so there’s no conflict.” Other industries, he says, might have a “closer natural affiliation” between editors and marketers, but the Times‘ complex strategy isn’t one-size-fits-all.

At The Atlantic, sponsored content pieces like “The Art of the Thrill” are proving that the publication has recovered from its 2013 Scientology setback. Maybe its approach to structuring content development is to thank. To create “The Art of the Thrill” for Porsche, The Atlantic leveraged influencers and wearable tech by hosting a driving event to promote the Porsche Macan. Real-time data on participants’ biological reactions to the car (the “thrill”) was measured by TRAQS Enterprise Platform, and Boston-based design studio Sosolimited was brought in to design visualizations for the native ad.

The process wasn’t unlike that of a creative agency devising an elaborate marketing campaign injected with multimedia and vim. “To us, native is not a format. It’s a sensibility,” Sam Rosen, VP of marketing for The Atlantic, has said. “It’s saying the content we produce will produce the sensibility of The Atlantic, but it won’t get close to confusing readers that it is editorial.”

Five publishers, five different approaches to creating sponsored content—yet each one has found its sweet spot. And maybe that’s the formula for producing successful native ads: Keep the development process as distinctive as the ads themselves.