Facebook’s Launching a Super Bowl Content Hub. Will It Work?

Social TV is already a big deal on Facebook. As the Associated Press reports, two-thirds of television viewers use social media while watching a broadcast, and Facebook claims that 85 percent of those people are using their social network. Now, with the recent launch of their Trending Super Bowl page, Facebook wants to make sure that everyone knows it.

When it comes to real-time engagement, Twitter is often thought of as top dog—in large part because brands, publishers, and celebrities can have more of a public impact on the platform. Look no further than Oreo’s Twitter hijacking of the social conversation around the great blackout of Super Bowl XLVII, which is often cited as the greatest real-time marketing move of the digital age. (Though it may also be a giant waste of money.)

Facebook’s interactions, meanwhile, tend to be confined to a person-to-person scale, unlike the kind of global conversation Twitter can foster. But with Facebook’s new Super Bowl hub, it looks like the social network is hoping to consolidate their already huge event audience onto one public platform.

To do this, Facebook is offering a robust hub that fits anyone’s social TV needs. A live scoreboard and play-by-play updates help anyone actually following the game, while a live feed featuring posts about the game from professional news outlets and friends allows anyone to easily join the global conversation in real time. 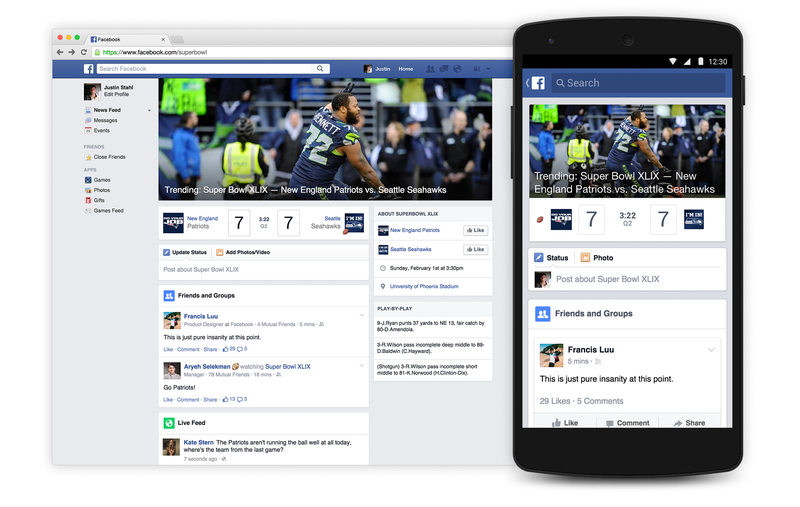 “We have been the second-screen, real-time audience,” Dan Reed, head of global sports partnerships at Facebook, told the Associated Press. “This Trending Super Bowl is part of a broader effort to better surface the great conversations happening in real time around live sporting events.”

Twitter users have always been able to follow trending topics via hashtags and keyword searched, and the company made a huge stride in their “Trend Page” initiative back in 2012 by partnering with NBC to create an event page for the London Olympic Games. Facebook, meanwhile, has never had a designated place to easily find real-time updates from both friends and strangers about specific events.

And now that Facebook is getting in on the action, it seems they have a bigger motivation than just stimulating conversation: They have ads to sell.

According to Reuters, Facebook is now allowing advertisers to target users based on what they are discussing in real time, which, as Wired notes, is a strategy Twitter has already been using.

Further stoking the fires of competition between Facebook and Twitter, Crowdtap’s recent survey of 6,000 consumers found that 65 percent of respondents are likely to interact with brands on social media while watching to find Super Bowl-related content, and almost 74 percent are likely to take action on social media if a Super Bowl TV ad asks them to. And how will they engage with those brands? Sixty-one percent said they’d update their Facebook status, while only 37 percent said they’d send out a tweet.

It looks like Super Bowl XLIX could be anyone’s game—and I’m not talking about the Seahawks and Patriots.