Data: Real-Time Marketing During the Super Bowl Is a Giant Waste of Money

Since Super Bowl XLVII, consumer brands have been falling over themselves to insert their ads into people’s Twitter streams during cultural events. Stuff like this: 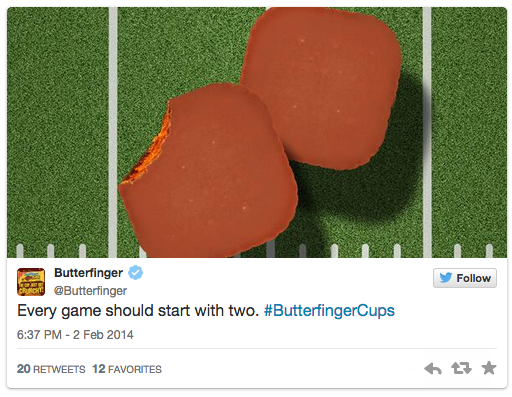 This phenomenon, which ad people call “real-time marketing” (and others call Twitterjacking) was precipitated by Oreo’s infamous 2013 tweet, in which the cookie maker posted this a few minutes after the stadium power went out during the third quarter of the big game three years ago: 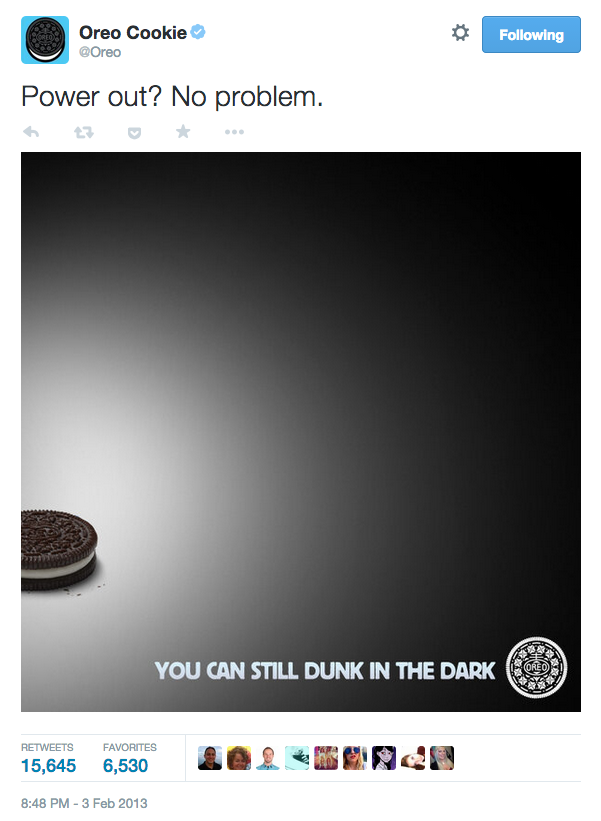 It was pretty quick work, and 13,000 people retweeted it (plus a couple thousand more in the years since). Compared to the 108.4 million people watching the TV commercials, and the 16,000 retweets Justin Bieber got for a regular ol’ tweet of his the same day, Oreo’s tweet itself wasn’t very impressive. But the ad world made a big deal of it.

Without a doubt, the fact that Oreo was able to crank out the image and fast-track it through comms and compliance approvals was quite a feat. But the true feat didn’t come until after the tweet was sent.

In my book, I wrote about the crazy aftermath—how Oreo’s agency convinced blogs to write about how clever it was, and then got news sites to write about how many blogs had written about it, and subsequently won a Cannes award based on how many news sites had written about that. It was a very clever exercise in PR momentum. Now the Oreo tweet—from its “millions of impressions” to the hundreds of stories about it—is gold standard for brands seeking social media attention.

That has led to “real-time marketing” popping up for just about every big event one can think of, such as the birth of the royal baby. Like this: 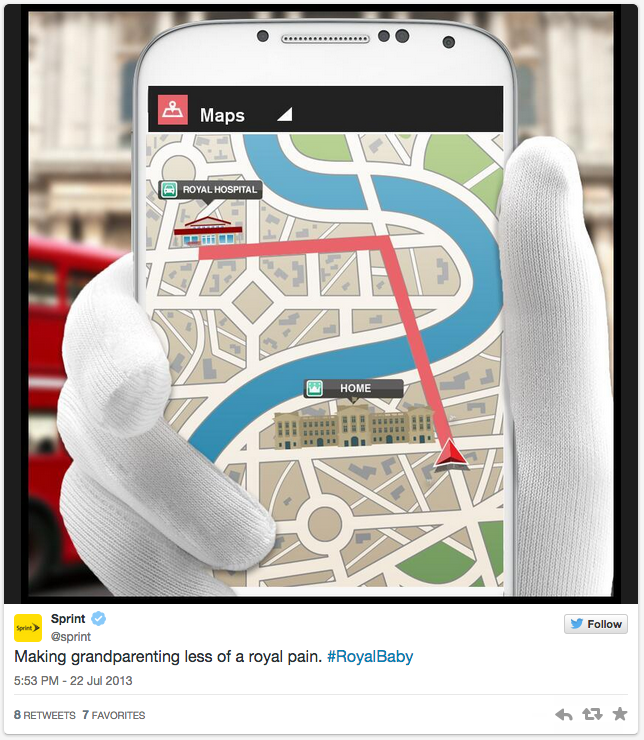 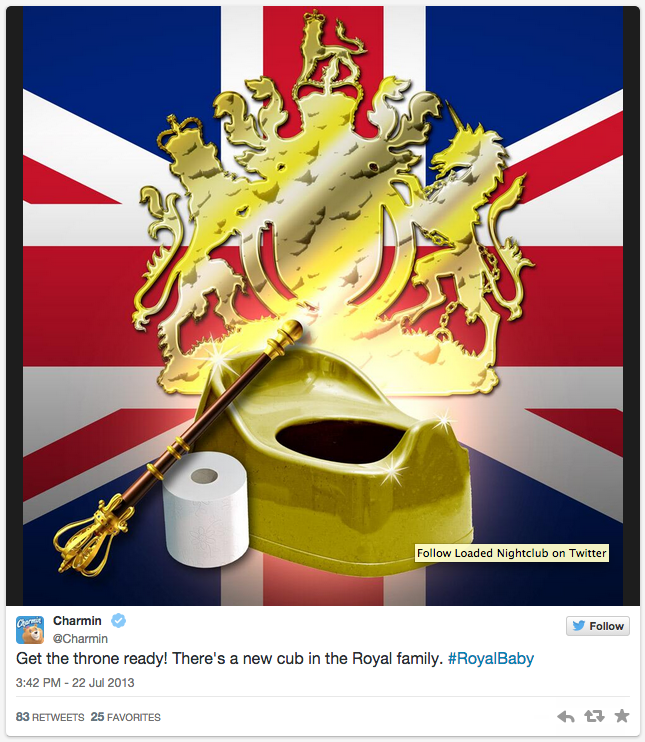 And this, by an Oreo eager to rekindle its previous glory: 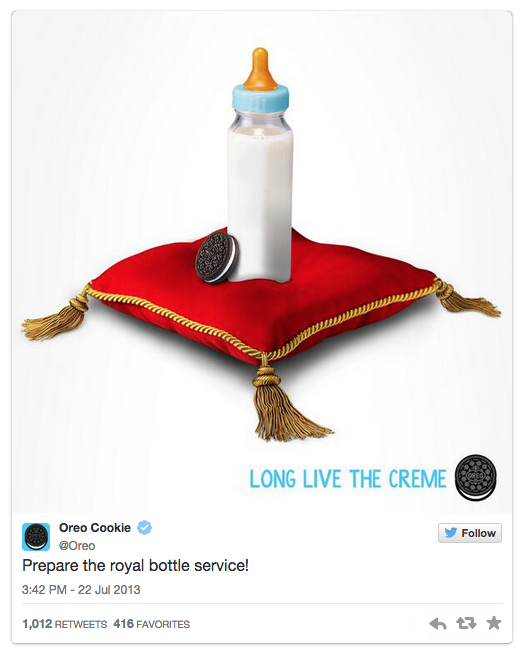 Much of this stuff is rubbish, though occasionally it’s actually pretty fun. But three years after “Dunk in the Dark,” Oreo’s big legacy is the fact that agencies are now in the habit of setting up “war rooms” where hungry social media managers stand by to respond to big events like the Oscars and the Super Bowl. In those war rooms, hyper-pressured social media soldiers produce riveting stuff like this: 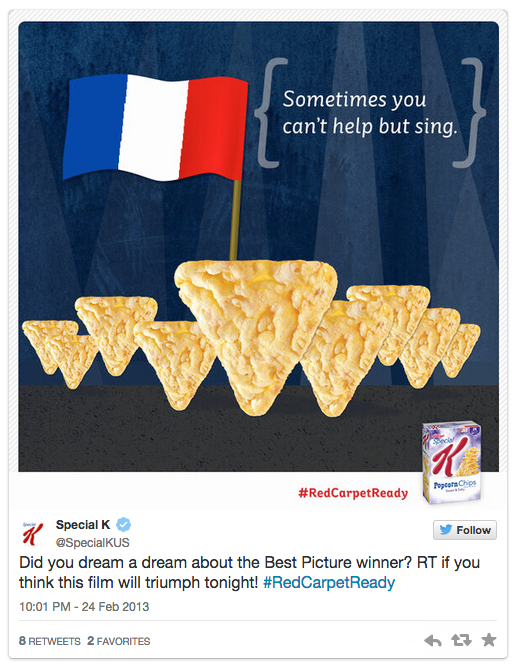 (Check out the retweets on that one! Woo!)

As the Super Bowl once again approaches, I’ve kept noodling about the cost/benefit of these diaper tweets and war rooms. Finally, I decided to run a little analysis, taking some of the most popular real-time-marketing brand tweets and calculating their impact versus their cost.

Agencies will typically bill their employees’ time at $100–500 per hour (and even up to $750!). Oreo’s war room, run by agency 360i, consists of a team of 15—artists, strategists, “monitors,” and executives. Adobe also runs a 15-person war room, so we’ll consider that standard, for the purposes of this calculation. Let’s be cautious and say each person is billed at $150 an hour. That would put the cost of Oreo’s war room at $2,250 per hour. The Super Bowl is four hours long, so we could estimate the personnel cost at an even $10,000.

But there’s no way all these agency people are showing up five minutes before the game and rolling out of the war room two minutes after it ends. The Super Bowl pre-game show is a big to-do. It’s six hours long, and a lot of people watch it. And the ceremony and interviews also go on for about 90 minutes after the game. I’d estimate the time that these war rooms are set up and “on command” at a minimum of 10 hours.

This does not, of course, take into account the cost of the actual war room and war-room equipment, nor the cost of the strategy leading up to the event, wherein the artists and strategists and executives strategize. I’d estimate that the actual fee for the war room for an event like the Super Bowl is much higher—starting at $100,000—but we’ll call it $50,000 for the purposes of this exercise.

The 2014 Oscars clocked in at 3 hours and 16 minutes, with several hours of pre- and post-show red carpet coverage, similar to the Super Bowl. Let’s pretend a social media war room cost a typical brand $50,000 for that. Now let’s look at the 10 most popular brand tweets from that event: 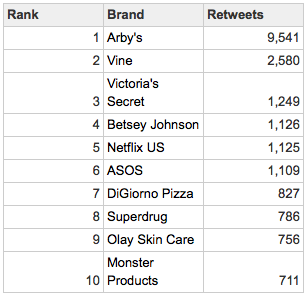 (Data according to Socialbakers, via Adweek.) 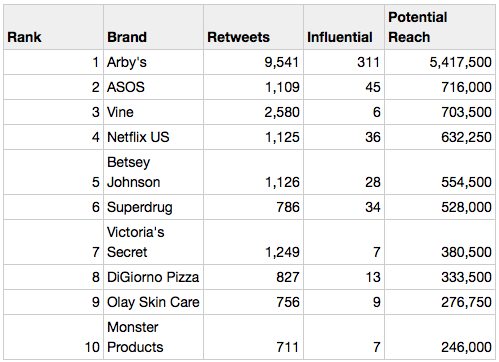 Now, everyone who follows each of these retweeters does not catch every tweet that runs through their feed. An average tweet, according to analysis by Danny Sullivan of MarketingLand, gets seen by 1 to 2 percent of its potential followers, and sometimes as low as 0.01 percent. Let’s be generous and call it 2 percent. So the number of people who realistically saw each of these brand tweets is approximately:

Remember, we’re being generous here. If we assume that “influential” means top 1 percent, or an average of 2,000 followers, then we get this:

Social media agencies will tout the results of their real-time social media campaigns in percentages: “510 percent increase in retweets!” The nice thing about that kind of measurement (if you’re the one selling it) is it doesn’t address the actual impact, or lack thereof, on the brand or whether it’s money well spent. Basically, when you look at social media marketing measurement, you get a lot of red herrings, and “ROI” is tracked in terms of its relationship to other social media marketing. Not, you know, in terms of how many roast beef sandwiches people bought because of it.

Here’s what each of these brands paid, given our back-of-napkin assumptions, for every person who probably saw their tweet:

A lot of these war rooms tweet on an ongoing basis throughout the event, so we could probably multiply the amount of reach they got to some degree. Let’s face it—most of their tweets don’t get seen or shared by many people, and certainly not many more than on a regular day when one person is manning the Twitter feed instead an army in a war room. Most of these war-room brands just tweet around hoping for a moment when they can pull out a surprise hit. Why don’t we, for kicks, cut the cost per impression on a tweet in half, assuming that these brands had one big win but their other tweets added up to just as much? That would mean:

… Arby’s spent $50,000 to flash its tweet across the screens of 108,000 people during the Oscars, at a cost of $0.23 per person. Monster reached 711 people, for $5 each. Remember, these are flashes before the eyes. Not clicks, not actually reading, but ocular grazing.

Let’s compare our figures to the average cost of other types of advertising (according to various reports). The below is the per person cost of having the ad flash in front of some piece of your vision: 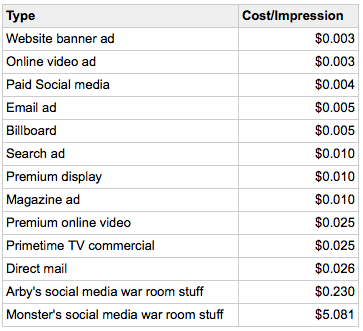 And this is the top 10 brands at the Oscars. How many other brands spent money on real-time war-room content and only got 500 shares, or 100, or 10? At our most generous, social media war rooming appears to be one of the most expensive—and least effective—ways to advertise out there. At more conservative estimates, well… the picture is pretty dismal.

After running these numbers, I went and looked at what Arby’s actually posted during the Oscars. Turns out they just had one tweet:

Most likely Arby’s didn’t set up a whole war room for that. Their community manager just was replying to a Pharrell tweet about the hat auction that Arby’s won. It wasn’t an ad. (And the tweet itself probably didn’t result in many roast beef sandwich sales.) Other brands that actually tried to capitalize on the Oscars didn’t get nearly as much traction as that one Arby’s tweet, and several brands likely paid a lot more for the nothing they got. Which brings us back to that time when Bieber tweeted a random thing about his travel plans and more people saw it than who saw the Oreo tweet. On social media, celebrities and publishers are powerful; advertisers trying to be cool are not.

A big problem with Twitterjacking—and trying too hard to do it—is that, unlike content marketing (which is when brands publish stories for education or entertainment, usually as blogs or magazines, in an effort to build relationships with audiences), it’s very hard for a brand to build a high-value audience based on (often inane) ads masquerading as conversations, especially on turf that the brand doesn’t own. Brands trying to imitate Oreo are always going to be one algorithm change away from being back to the drawing board, no matter how successful the last real-time marketing campaign was.

Fact is, if it wasn’t for the huge amount of press attention the Oreo tweet got in the advertising trades, that war room would have been a rather awful investment. For this sort of marketing to work, it needs to cost way less. Otherwise—and I suspect this is the case—the Twitterjacking craze, based on blissful ignorance, fueled by a little bit of ad industry vanity, will soon go the way of the buffalo.

To this Sunday’s Twitter soldiers: Enjoy the war while it lasts!