As we revealed last month on the Strategist, there’s a new player in the native advertising transparency and standards game: a browser plug-in created by a product engineer at Google.

The plug-in, called AdDetector, adds a red banner on top of sponsored content articles to add an extra layer of transparency. The results look like the below: 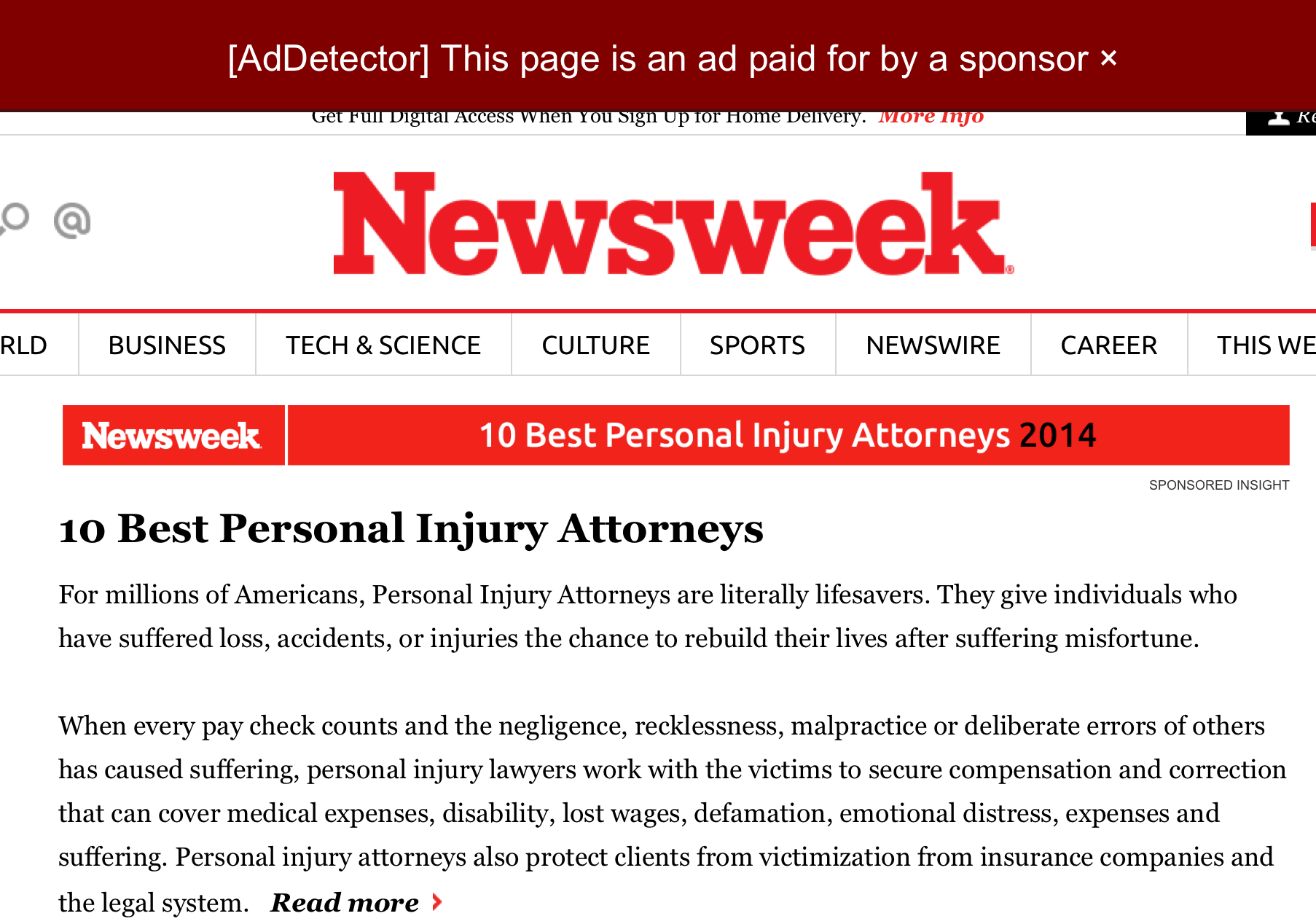 After our interview on the Strategist, The Wall Street Journal, The Verge, PSFK, and others picked up on the plug-in, leading tens of thousands of users to download it and sparking heated discussions on social media (and, to be sure, in office cubicles) about its value in bringing transparency to native advertising.

To capture that debate, we caught up with some leaders in the native ad industry to get their reactions to the plug-in and their latest thoughts about sponsored content and native ads.

I downloaded AdDetector as soon as it was released to see if it actually worked as it said it did and was pleasantly surprised to find that (for the most part) it does. If you’re someone that loses sleep over the lack of consistency when it comes to native labeling and disclosure, then boy is this the plug-in for you!

One cautionary note, however, is that the algorithm only works if there are sponsorship markings on the page to begin with, so if a rogue publisher or platform is playing dirty and not using any disclosure language whatsoever (Note: this is a stupid idea by the way, and not one I support) then not even AdDetector can help you!

Also, if you’re someone that’s mostly worried about being tricked into clicking on a native ad, then perhaps this isn’t the plugin for you. Why do I say that? Well, AdDetector only works on the actual article page level—meaning it doesn’t detect and disclose their standard verbiage on native ad promo or storytelling units, which means you can still be tricked into actually clicking on them.

So is this the answer to everyone’s native advertising nightmares? No. Is it a good first step? For sure, so props to Ian Webster, the brains behind the plug-in. Now the only problem I see is getting the native naysayers to actually download it.

I don’t find the plug-in that compelling (and it looks clunky on the screen) unless it starts being able to call out biased reporting across the web. I find native advertising to be very transparent, and I hope that all publishers maintain a consistent and prominent sponsor label.

Rather than debate small differences in native ad labeling the industry should shift focus to improving digital journalism, and work to make stronger distinctions between what is journalism free of any commercial interest and what can be more broadly defined as content.

I think it’s clever. But then, it’s not very accurate. I believe it marked all of our content as “native advertising.” I don’t think plug-ins or even the FTC will be the impetus for publishers to be clear about what’s advertising and what’s not. What will do that is the audience. At the end of the day, the most valuable thing publishers have is the trust of their audience. It’s not pageviews or share counts. Smart publishers will be very clear with their audience not out of some ethical duty or because of a plug-in, but because transparency and honesty are simply good business.

The nice thing about AdDetector is that it puts more power in the hands of readers. It’s demonstrating that if the native ad industry doesn’t do a good job with transparency and labeling standards, readers will make their own solutions. We can see how audiences are feeling disrespected whenever John Oliver and Clickhole mock native ads. Moving forward, tools like AdDetector can lead to a healthier relationship between readers and publishers, ultimately improving the advertising ecosystem. Native ads have potential, and we have to remember that editorial doesn’t own a monopoly on good content. Just think about your last Super Bowl party and how many people were more into the ads than the game. By the same token, native ads can be compelling and worth our time. But if they let readers down, the problem is compounded when there’s a lack of transparency.

AdDetector is one of many tools out there. Every publisher looks at sponsored content differently, from who creates it to how it’s labeled. At the Post, we make it clear to our audience that it’s a paid post, both on the homepage module and on the article page. We also work with clients to make sure that everyone’s on the same page when it comes to labeling. Neither we, nor our partners, are in the business of tricking readers.