Native Adpocalypse! The NYT Sponsors an Upworthy-Style Listicle on Mashable

“​11 Inspiring Videos That Will Restore Your Faith in Humanity” sounds like your standard Tuesday-morning Upworthy offering, but it’s actually a “BrandSpeak” post on Mashable paid for by The New York Times. 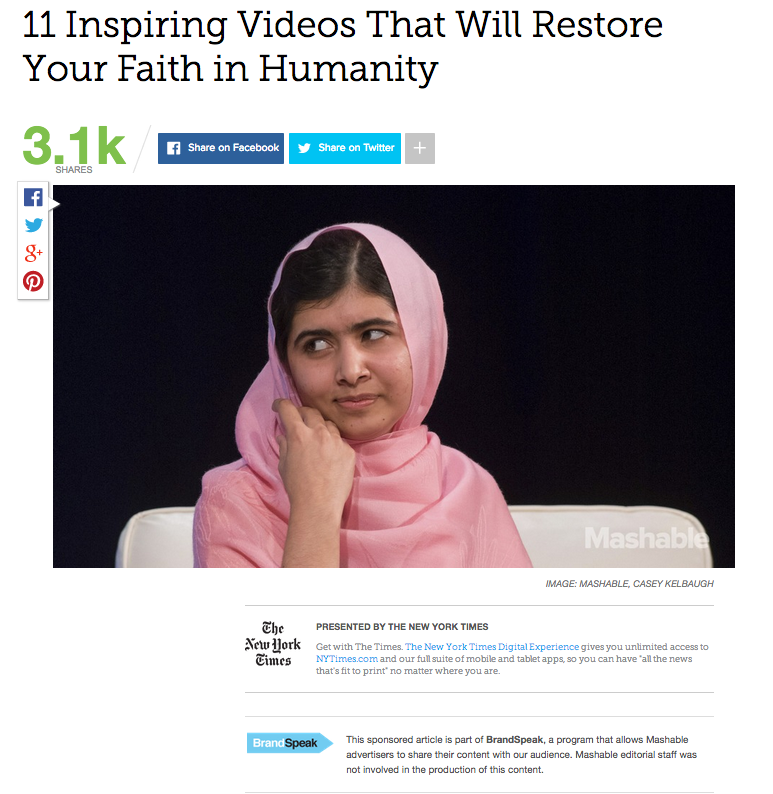 Those 11 inspiring videos are all original feel-good New York Times productions, and as Digiday’s Lucia Moses noted this morning, the ad is intended to drive subscription signups for The Times, with a prominent call to action at the top of the piece imploring readers to “Get with The Times.”

While this may seem bizarre and a little too meta for this early in the morning, it’s actually a shrewd move by The Times to grow their audience. Clearly, they’ve identified Mashable readers as potential Times readers and subscribers, and as a result, they’ve come to them with a month-long campaign of branded posts.

The Times also punched up the titles of the individual videos for a Mashable audience. “Tattoo Artist Gives Breast Cancer Survivors Nipples and Hope” was originally titled “The Nipple Artist,” and “Can Your Grandma Pump Iron Like This?” was called “Shirley and the Bodybuilder.”

This is something publishers of all kinds—and particularly brand publishers—can learn from. As Contently’s Sam Slaughter wrote in a post last week, sponsored content should be used to introduce yourself to new readers and bring them to your owned media property:

For one, building an audience is hard. And more importantly, even a brand with their own audience will want to reach other audiences with their message. Whether they use sponsored stories, paid distribution, or social advertising to get there is dependent on the circumstances—but the need to reach additional eyeballs efficiently and effectively is constant.

Case in point: Here at Contently, we have a huge audience for our industry pub, The Content Strategist. And yet we still pay through the nose to place sponsored content on publisher sites like Adweek. Why would we do that when we could put it in front of our own audience for free? Simple: Adweek readers are people we want to reach.

In the immortal words of Terrell Owens, getcha popcorn ready.