On April 20, something pretty amazing happened in brand land: A bunch of companies started making jokes and references to smoking weed on Twitter, celebrating 4/20 like it was any other holiday. And I’m not just talking about traditional stoner brands like Denny’s and Ben & Jerry’s. We’re talking about Pepsi. Applebee’s. The freaking Body Shop. Five years ago, this would have been unthinkable.

(Okay, maybe The Body Shop makes sense. After all, smoking a joint in the bathtub is a staple of pretty much every show on HBO—which, not surprisingly, got in on the action too.)

Naturally, the tweets were all pretty terrible, but that’s par for the course when it comes to holiday-themed brand tweets. The nice surprise was seeing brands taking a calculated risk, which brings up a pretty big question: When are brands going to start taking serious risks with the rest of their content?

I’m not just talking about one edgy campaign, either. What we’re really waiting for are the risks that come with relinquishing control and letting creative people produce great content without suffocating oversight—something that marketing legend Seth Godin strongly advocated brands to do when I interviewed him earlier this year:

“I think the most important thing is to have an office that’s not in your building,” Godin said. “I think what kills brands who try to be interesting is to have meetings where they’re not saying to senior management, ‘How can we be more interesting?’ Instead, they’re saying, ‘How can we play this more safely?’ That’s not what happens when you want to make a hit TV show or a website that people care about. You need editors, not brand managers, who will push the envelope to make the thing go forward.”

If Pepsi can tweet about getting #Mondazed, certainly they can set up a relatively independent newsroom that creates interesting things. And with that sentiment in mind, let’s kick off our roundup of the best branded content of April by celebrating a company that does just that…

(A special thanks to Dillon Baker and Darcy Coulter for helping round up this month’s selections.) 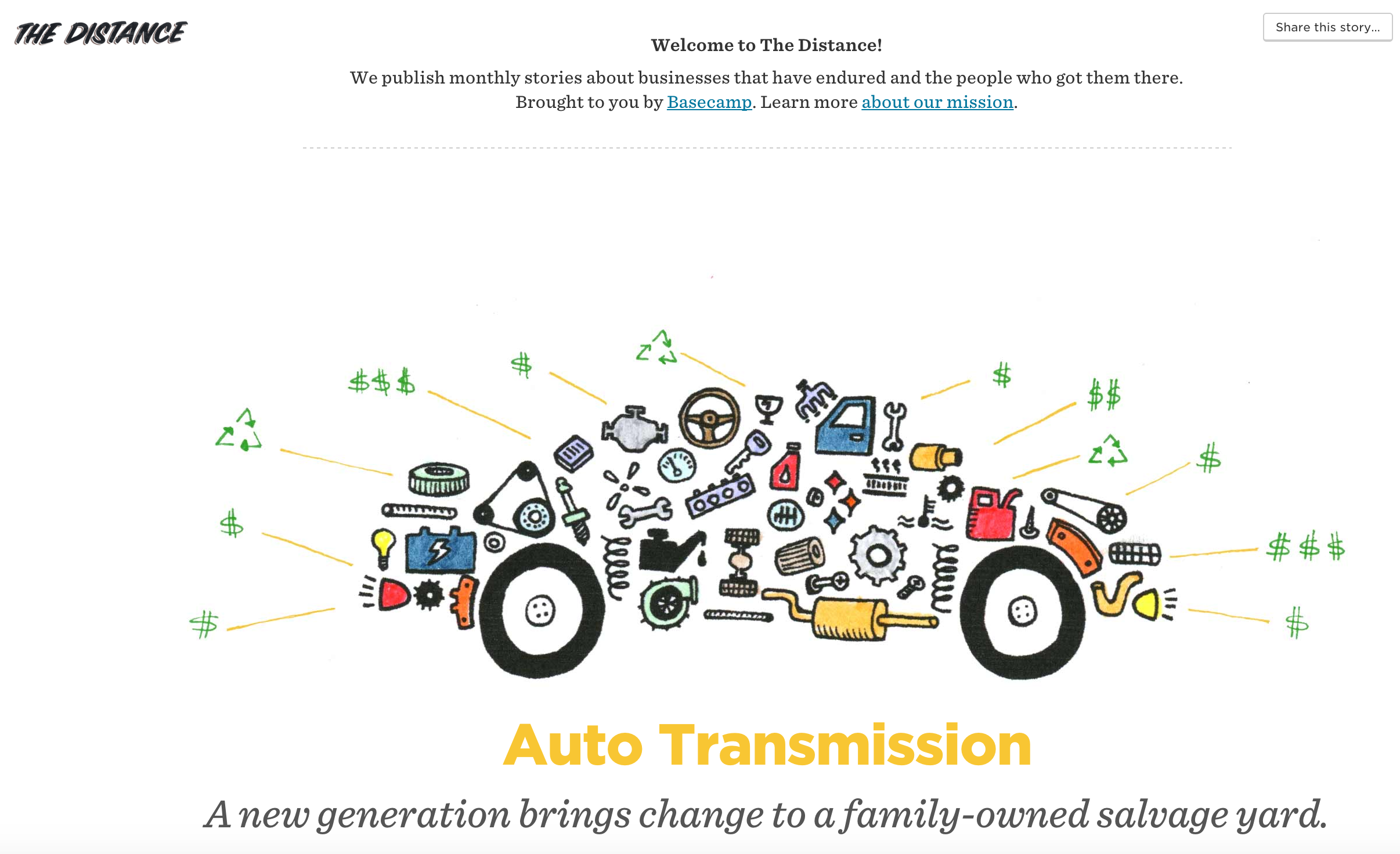 It’s almost been a year since Basecamp launched The Distance, an online magazine that publishes one awesome longform story a month and eschews technology altogether. Instead, the site celebrates companies that, like Basecamp’s creator 37Signals, have been bootstrapped from the get-go, and unlike 37signals, have been around for at least 25 years. As we profiled last year, editor and reporter Wailin Wong has the editorial freedom to tell whatever stories she sees fit, and this month’s edition is a treat, profiling a Chicago salvage yard that’s stayed virtually unchanged for 60 years—until now. It’s a reminder that brands can do great magazine-quality storytelling. 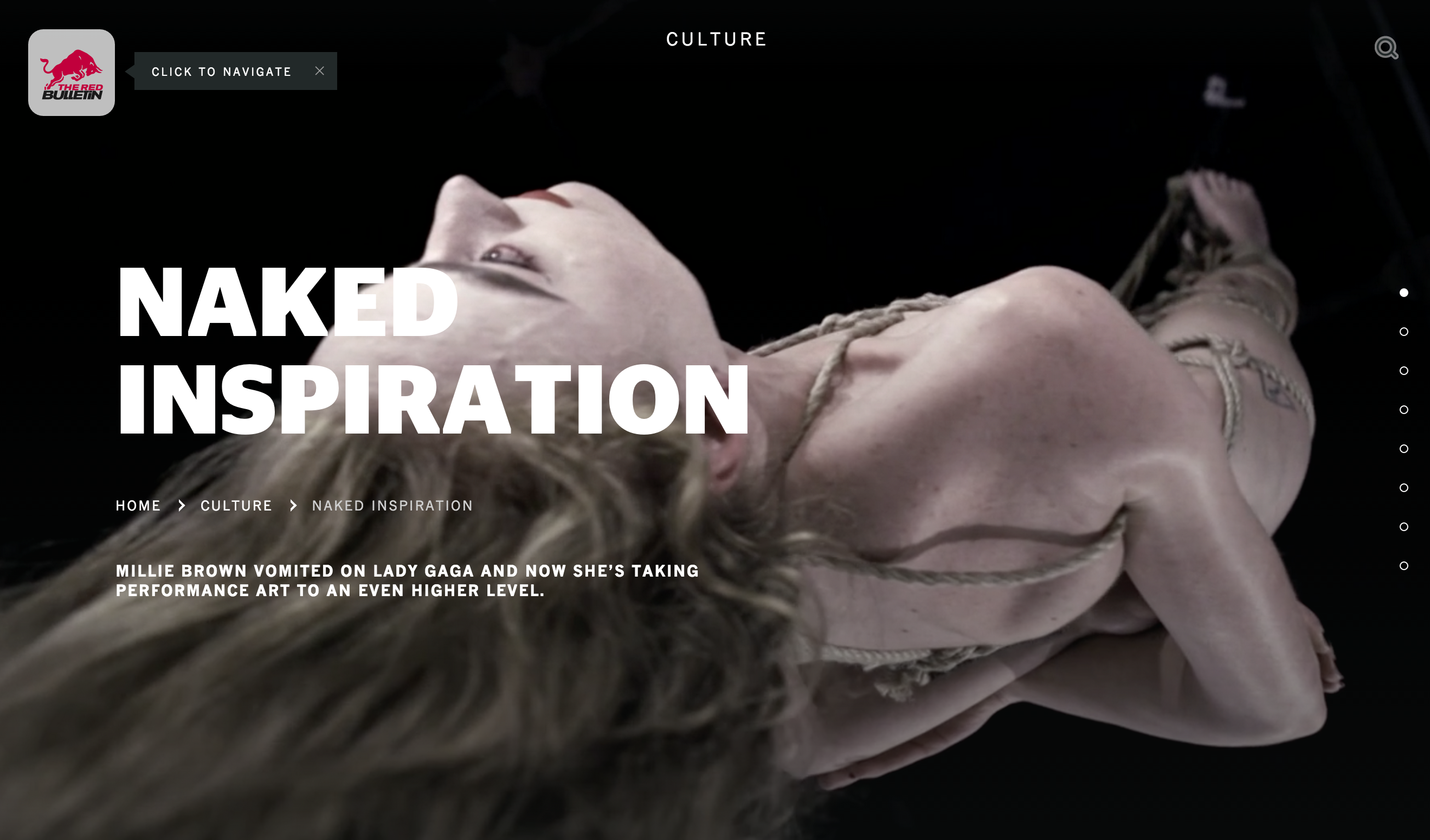 Speaking of taking risks: How many brands would have the guts to publish a story with this headline and dek?

It’s experimental and fantastic, and ties nicely into Millie Brown’s Episode of Diplo@Large on Redbull.TV. Go experience it now. I can wait.

Case studies are like the 58-year-old boyfriend your mom met on Match.com last year—no one’s actually entertained by them, but everyone’s cool with keeping them around for reasons that are hard to explain.

Bobbi Brown Cosmetics did the impossible, though, and made case studies that are genuinely entertaining, releasing a series of short videos featuring seven elite female athletes who tested out Bobbi Brown’s long-wear-life makeup while talking about their lives and sports. Each women’s strength and pride shines through, and at some point, you start to feel really out of shape.

We profiled Bevel’s brilliant brand mag, Bevel Code, last month, examining how the grooming brand was creating a unique and premiere lifestyle site for men of color. This month, the company took it up a notch with the introduction of Bevel Classics—short chronicles about classic haircuts and the famous barbers who have perfected them. It’s a great series of content from a brand that just gets how to be a publisher.

Intel & Dell: “What Lives Inside”

What do you do when you’re a tech brand and no one under 40 seems to know who you are? Rolling into a ball under your desk and crying is one option. Going straight Hollywood is another.

Over the past four years, Intel’s Inside films have been one of the most impressive examples of a brand storytelling series we’ve seen. To raise brand awareness among millennials, Intel has released a series of short films with big stars and a “social layer” that lets fans contribute to the creation of the film.“We basically asked: ‘What if advertising were created today?'” Billie Goldman, director of partner marketing at Intel, explained at the Digiday Brand Summit.

Two years ago, one of the films, The Beauty Inside, starring Topher Grace, won a Daytime Emmy. And this year’s version looks poised to have similar success; What Lives Inside stars J.K. Simmons, who plays a man who goes on a magical adventure into the fantastical world of his puppeteer father. The series was released over the course of April in four episodes that run about 10 minutes each. The episodes fit nicely into Intel & Dell’s brand message of imagination and creation. Even cooler: The crazy creatures featured in the film were chosen from fan submissions.

You have to love a British bakery that somehow gets Sylvester Stallone to film a ridiculous parody of Rocky in which he’s a badass bakery delivery truck driver, and then takes the very British route of giving the video the most practical SEO title ever. It’s like they knew exactly what I’d Google while writing this column half-drunk at midnight.

And listen, branded content is getting better every month, but it’s probably going to have to get a lot better before a Rocky parody starring Sly Stallone fails to make this list.

Have a piece of branded content you loved this month that I missed? Want to make suggestions for next month? Tweet me @joelazauskas.