In case you missed the memo, April Fools’ Day now lands on the last day of March, at least if we’re judging by the wave of brand campaigns that launched yesterday.

This development throws a wrench into our roundup of the best branded content from last month. Sure, 89 percent of this year’s campaigns involved lame selfie jokes—which are now more overplayed than Journey at a karaoke bar—but there are some worth noting. Google’s PAC-Maps freaking rocks. ThinkGeek’s “Wearable Interactive Quest” spoof game is hilarious if you’ve ever known anyone who was way too into Dungeons and Dragons. Sure, these day-early April Fools’ jokes feel a little wrong, like binge-eating Peeps and making awkward small talk with your extended family on Easter Saturday, but you’ve got to give credit where credit is due.

The smartest campaigns, though, might be the ones brands use to secretly test the water for products they brainstormed six drinks deep at happy hour. I’m almost positive Chrome Selfies is going to be an actual social media app within three months; if Google doesn’t make it, some Stanford kid will copy it and get $50 million in seed funding. Game of Thrones Clue should absolutely be a real thing. By Christmas, Hulu Pets will be the third-most watched section on Hulu. And while I have no sources to back this up, I’m pretty positive Amazon Dash was an April Fools’ joke until Time lost its shit and pretty much named the company its person of the year.

And with all that early April Fools’ content out of the way, let’s get to the rest of our best branded content of March…

(Thanks to Dillon Baker and Darcy Coulter for helping round these up.)

Last September, Marriott went all in on content with the launch of a 65-person content studio. In March, we started to see those efforts really pay off with the release of Two Bellmen, a 17-minute action-comedy film that’s beautifully shot and immensely entertaining. It has nearly 5 million views since its March 10 release, and even better, the film has YouTube commenters in awe—and drooling a little bit over William Spencer and Caine Sinclair, the two bellmen protagonists. 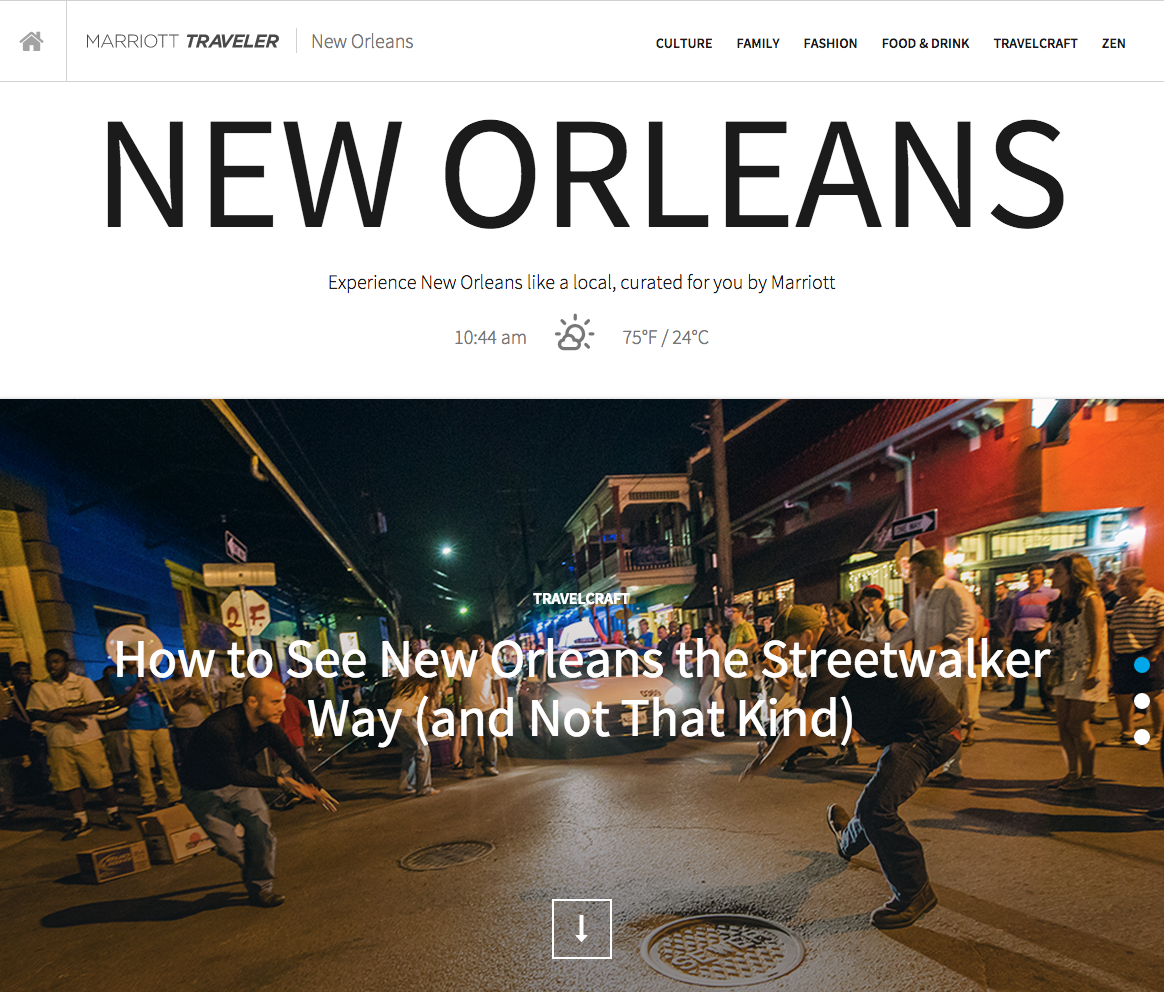 Following Two Bellmen, Marriott had another hit on its hands with the launch of Marriott Traveler, a gorgeous new digital magazine. The first issue, which takes travelers behind the scenes and uncovers the secrets of New Orleans, generated strong press across the travel and marketing industries.

The success perfectly illustrated Marriott’s new way of thinking about advertising: “The days of interruptive marketing are over,” David Beebe, Marriott’s VP of global creative and content marketing, told us. “If we provide value to consumers, they’ll provide it back to us.”

Full disclosure: It was created in partnership with Contently, but I can honestly say it’s an awesome new pub. For more, check out Tessa Wegert’s excellent behind-the-scenes profile.

CreativeLive, an online hub of creative workshops, struck viral gold in March when they celebrated Adobe Photoshop’s 25-year anniversary by challenging a bunch of Photoshop experts to use Photoshop 1.0. It’s a textbook example of knowing how to geek out with your target audience and will make anyone who remembers using an early Mac get all nostalgic. With 1.4 million views on YouTube so far, it’s a big win.

Gun safety advocacy groups are faced with a colossal challenge: Owning a gun increases the risk of homicide, suicide and intentional death, yet 60 percent of Americans still believe owning a gun will make them safer. In an attempt to change some minds, the nonprofit States United to Prevent Gun Violence set up a “gun store” in NYC, only to regale shoppers with the tales of the accidental death that each gun caused. It’s a powerful video—one that’s accumulated nearly 4 million views in just two weeks— and definitely something I’m going to revisit when I inevitably get into a drunken argument with half my family over gun safety laws this weekend.

No matter your age, there’s a good chance Converse’s Chuck Taylor All Star shoes have played a role in your life. The iconic shoes seem to stay relevant for every generation, particularly for those who ever went through a hipster phase.

To celebrate the 100-year anniversary of Chucks, Converse has been rolling out an ambitious global “Made by You” campaign. As Eric Blattberg writes on Digiday:

The brand’s “Made By You” campaign spotlights lived-in Chucks from the famous and the ordinary. Across art installations in cities all over the world, Converse is showing how creative souls like Patti Smith, Andy Warhol and the musician next door customize their sneakers into well-worn, one-of-a-kind artworks — a practice that has become closely associated with the shoe as it approaches its centennial.

Those art installations include a virtual reality exhibit at a gallery in the Flatiron District in NYC where visitors can put on a pair of Google Cardboard Glasses and experience the installations virtually. Everyone loves Chucks, and Converse is taking full advantage. 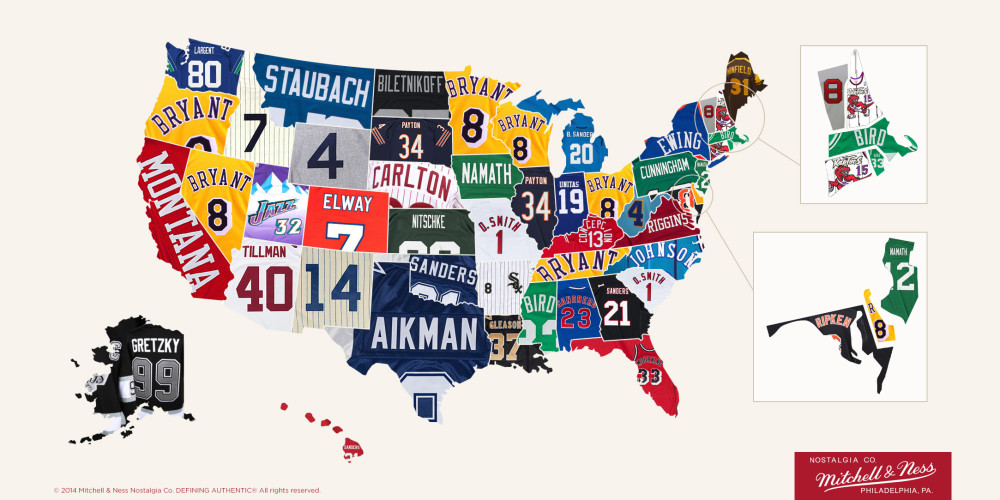 In another great example of knowing your audience, retro apparel retailer Mitchell & Ness used their sales data to create this dope map of the best-selling retro jerseys in each state along with an accompanying guide. Everyone from Deadspin to ESPN picked it up, and the Internet proceeded to make fun of Connecticut for their love of Vince Carter, a basketball player who never played anywhere near the state. This map also made me feel like a fraud for not owning a throwback Patrick Ewing jersey. What kind of person am I? 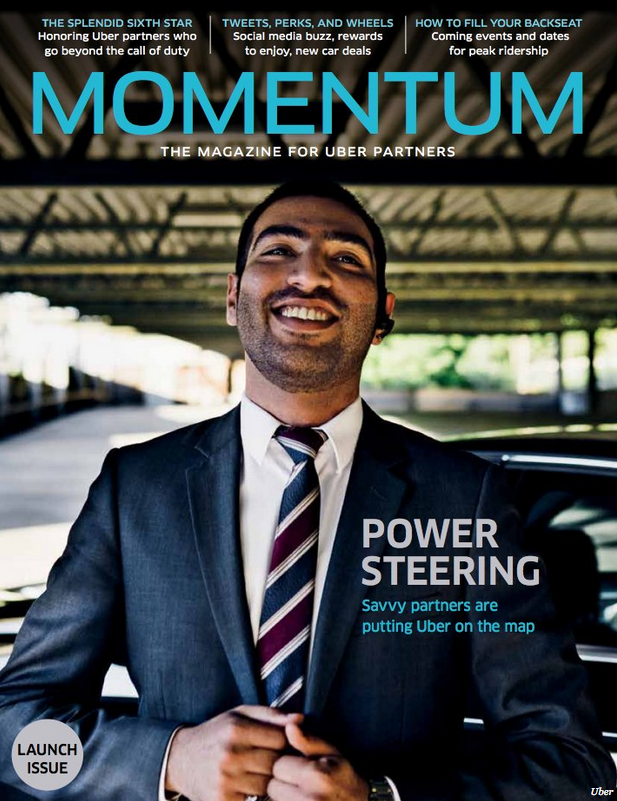 Say what you want about Uber—and really, there are a lot of bad things you can say about Uber—but the launch of its driver-focused Momentum magazine was incredibly smart. The new print mag targets the company’s 150,000 drivers with useful content about the fleet that makes the company go: stories about how to exercise while on the clock, tips for grabbing quick bites, and, of course, where to find a bathroom. The inaugural issue was launched in Boston, New York City, Chicago, Ohio, Oklahoma, and San Francisco.

Uber is following the lead of Airbnb, which recently started publishing a print mag for its community of hosts. It’s probably only a matter of time before TaskRabbit publishes a magazine for aspiring actors moonlighting as handymen.

As a rule, I need to include at least one video in each monthly roundup that will make you cry a little. May I present Robert Downey Jr., dressed as Iron Man, delivering a prosthetic arm to an awesome 7-year-old boy named Alex. By the time the big Iron Man hand grasps the little Iron Man hand, you’re probably going to lose your shit.

The gold standard for viral brand videos is Dove’s Real Beauty sketches, which, two years ago, generated nearly 30 million views in the first 10 days after they went live. But in March, Durex gave Dove a run for its money with “#Connect,” a video that parodies Dove’s style while introducing a “sexy new smartphone technology” to tech-addicted couples. Since March 11, it’s racked up over 36 million views on YouTube, and while you see the joke coming a mile away, it still hits the spot. (No pun intended.)

What was your favorite piece of branded content in March? Let me know @JoeLazauskas, and I’ll take a break from sharing April Fools’ jokes in our company HipChat to respond.