That’s right—it’s time for my picks of the best branded content of 2014. It’s kind of like Cannes, except instead of a gold lion, you get a picture of our soccer team with Drake. If you work at one of the companies below, tweet me @joelazauskas for your printed copy.

When we look back on content marketing in 2014, there’s a good chance the first thing that pops into our head will be Jeff Goldblum in ’70s loungewear, shilling for light bulbs.

In September, GE hired comedy duo Tim & Eric to produce a masterpiece starring Goldblum as he pitches the incredible value of the long-lasting Link lightbulb. The clip has nearly 2 million views on YouTube, and is one of the rare pieces of content marketing with serious rewatch value.

But this one might top them all. Come for the lightbulbs, stay for a half-naked Jeff Goldblum playing a grand piano.

Purina’s robust content team creates hundreds of content per day, but the most impressive pieces are undoubtedly from the hilarious “Dear Kitten” series, created in partnership with BuzzFeed. I’m pretty sure every brand publisher on earth wishes that they had the liberty to just say, “Screw it,” and have their content strategy focus on cats. Considering the current state of the Internet, it’s almost an unfair advantage. But when you have that kind of advantage, you’ve got to milk it for all its worth, and Purina has done that with the six-video series, which has been viewed nearly 40 million times on YouTube so far this year. 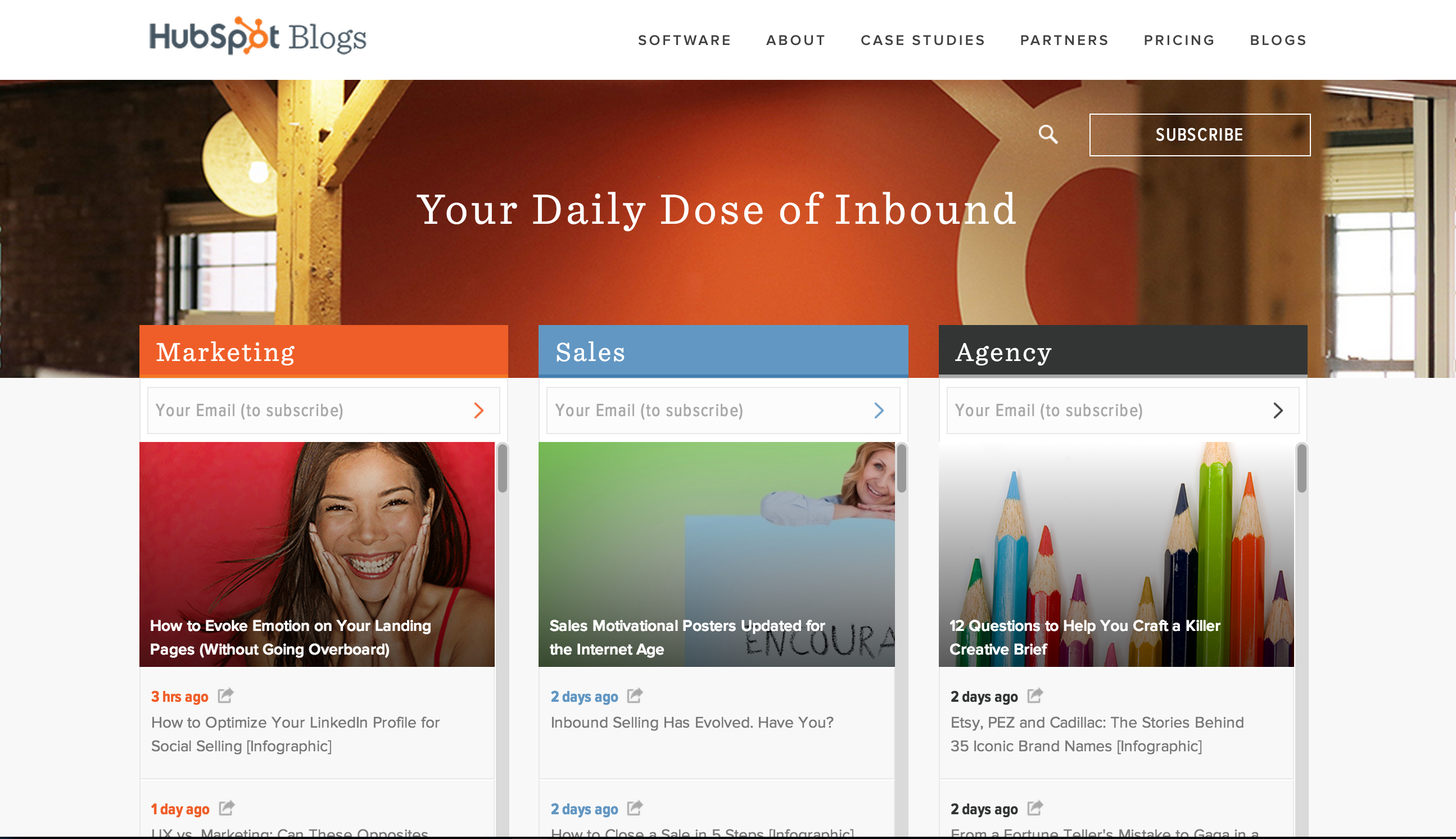 With over 1.5 million monthly readers eating up six to eight posts a day, HubSpot is the premiere example of thought-leadership content marketing. Simply put, HubSpot’s Inbound Hub is the best inbound marketing magazine in the world—an invaluable resource to marketers around the world and a big reason the software company IPO’d with a $1.3 billion valuation this year.

In addition to Inbound Hub, HubSpot partnered with Moz to create Inbound.org, a 30,000-member community for inbound marketers. 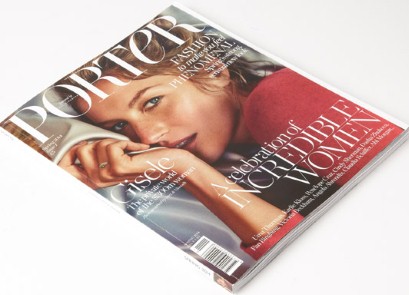 What can content marketing do? Well, it can give us a photo essay on Martha Stewart as shot by Terry Richardson in a glossy magazine that’s distributed in over 40 countries. I’m not sure if that’s necessarily a good thing, but it’s significant nonetheless.

Yes, luxury retailer Net-a-Porter’s Porter magazine is one of the most ambitious pieces of content marketing we’ve seen in some time. It launched in February with supermodel Gisele Bündchen on the cover and spreads featuring Angela Ahrendts and Uma Thurman. However, from an editorial standpoint, the masthead may be even more impressive: Lucy Yeomans, former editor of Harper’s Bazaar UK, serves as Porter’s editor-in-chief.

So when we talk about brands truly taking up the challenge of becoming media companies, we’re talking about companies like Net-a-Porter. After all, Porter’s digital counterpart, The Edit, reaches over 6 million visitors each month.

New rule: If your content marketing makes over $450 million, you get an automatic spot on the “Best Branded Content of the Year” roundup.

Make no mistake: The LEGO Movie was a savvy piece of branded content. Although LEGO put out a manifesto declaring, “We are not making a commercial for the toys,” the brand was an integral part of the filmmaking process, reports Fast Company, and exerted extensive approval over the content.

The result was arguably the most successful piece of branded content of all time, or, as director Phil Lord described it, “a soulful cash grab.”

Honda: “The Other Side”

When my superstar intern Kieran came across Honda’s “The Other Side” video, he sent it to me with a simple note: “This is the coolest shit I’ve ever seen in my whole damn life.”

He wasn’t being hyperbolic.

Created by Wieden+Kennedy London, “The Other Side” is a “double-sided story” on YouTube—when you hold down the “R” key, the film flips between two parallel storylines about a dad living a double life on Halloween.

It’s masterfully crafted and completely trippy. What’s even more amazing is how strongly it connects back to the product, with the story’s two sides cleverly tying back to the Civic and its sporty counterpart, the Civic Type R. Go to Honda’s YouTube page and watch it right now.

The Big Lebowski was pretty much the greatest commercial for Kahlua ever made, as Jeff Bridges’ iconic character, “The Dude,” saunters through the film sipping on White Russians and just being generally awesome.

Sixteen years later, Bridges has finally starred in an actual commercial for Kahlua, except he’s not playing The Dude, and it’s not really a commercial. Instead, it’s a bonkers four-minute film noir.

In the film, a present-day Bridges—sipping a White Russian in a smoky jazz club—narrates the tale of his younger self finding a valuable briefcase in the Mexican desert before being saved from the bad guys by an astronaut that falls from the sky. It’s an incredibly weird piece of content, but Bridges’ narration is entrancing, and in the end, it fits the Kahlua tagline: “Mixing things up since 1936.”

I’m writing this at 11 a.m., and after watching this video three times, I can’t deny that I’m craving a White Russian. (Insert alcoholic writer joke here.)

Forget the soap opera; it’s all about the burrito opera. (I’ll take mine with sour cream and a sense of regret!) Chipotle aired a four-episode web series on Hulu beginning in February, and though it wasn’t Breaking Bad, it was quality entertainment, scoring an 8/10 rating on IMDB.

The series is a jabbing satire of the agriculture industry and capitalizes on Chipotle’s unique place in the fast food industry. The company was the first American restaurant chain to reject antibiotic-raised meat and is now in the process of banning genetically modified foods, fully committing instead to locally grown produce. Though those efforts may be overstated, “Farmed and Dangerous” brilliantly promotes Chipotle’s unique value proposition to consumers in an—ahem—organic manner. The press the web series generated was worth well more than its $1 million production budget. 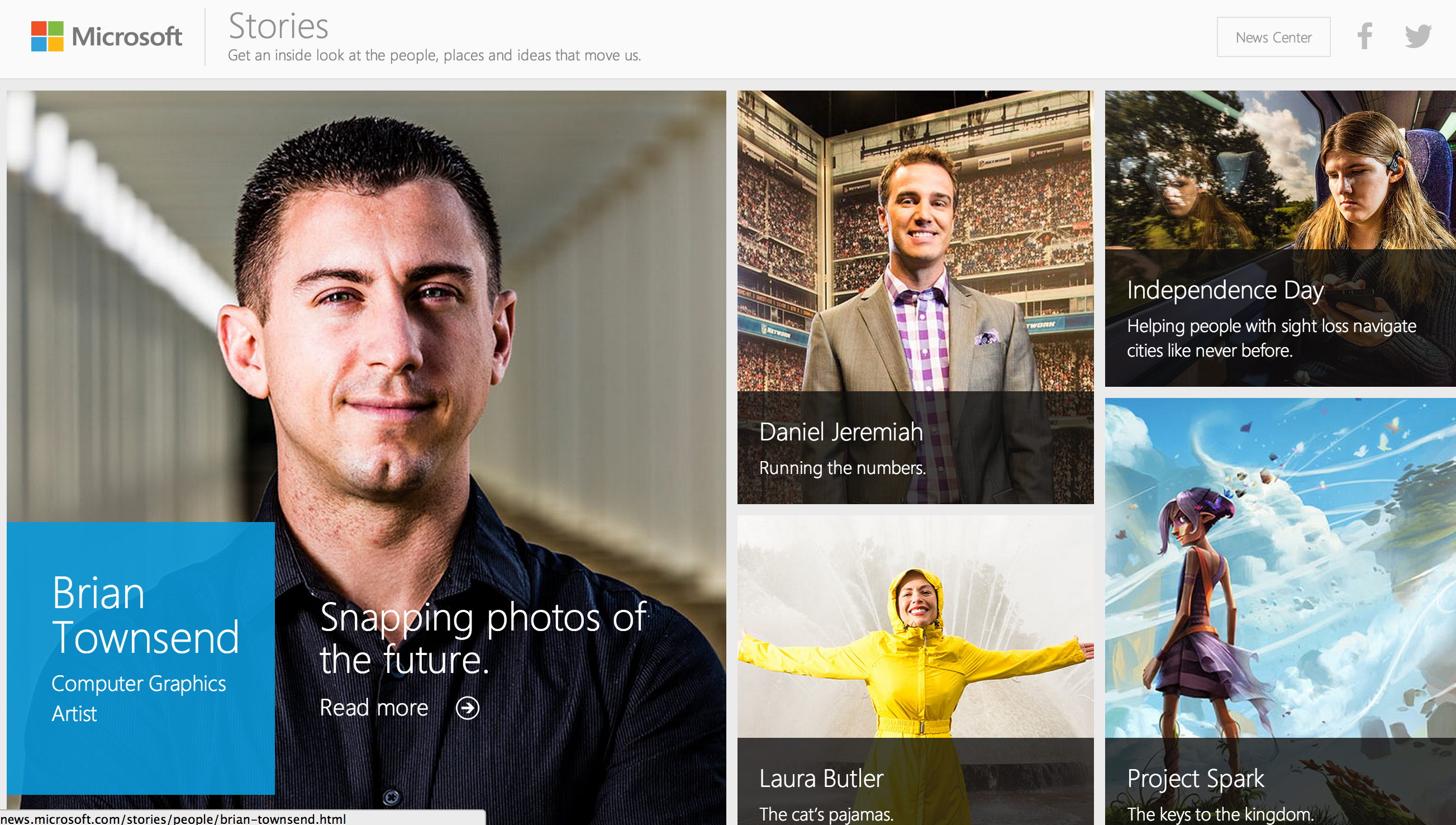 Microsoft isn’t exactly known as an edgy, innovative brand, but its content marketing certainly is. It’s quite possible no company is better at telling stories about the unique projects its own employees are taking on, from fighting cyber criminals to an industrial hub of experimental design that’s straight out of a sci-fi movie.

This year, though, Microsoft has been covering its own fascinating work with a deft touch. The design of Microsoft Stories is sleek and splendid; the homepage features big, vibrant images; and the article pages echo Medium’s design, with some “Snow Fall” thrown in for tasteful measure. Expect a lot of other tech companies to copy this approach in 2015.

Electrolux: “The Next Black”

The single best piece of content marketing about fashion in 2014 didn’t come from a fashion brand. Instead, it came from an appliance company.

Unexpectedly, Electrolux—a company that primarily manufactures household appliances like washing machines—made a stunning 46-minute documentary about the future of fashion that focuses on technological innovations like wearable technology, eco-friendly materials, and even clothing grown from living organisms.

“The washing machine industry isn’t exactly sexy, so they decided to focus on the clothes that people put into their machines rather than the machines themselves,”explained Philip Marthinsen, head of business and strategy at digital agency House of Radon, which helped create the film.