How AirBnb Is Using Content Marketing to Stay on Top

In the business of connecting travelers with affordable, memorable, and sometimes unusual rooms, Airbnb rules the roost. But for the brand that revolutionized the hospitality industry and kickstarted the sharing economy’s P2P marketplace model, storytelling is proving to be among its greatest strengths.

For the past 24 months, Inc. magazine’s company of the year has been crafting a lavish collection of branded content. The newest feather in its cap? Pineapple, a print magazine. The winter 2014 edition includes features like an interview with a London gallery curator and a culinary tour of Seoul. It has an initial print run of 18,000 copies earmarked for Airbnb hosts and book stores. 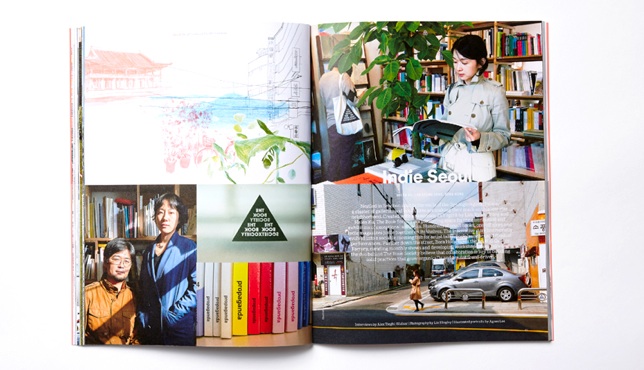 Airbnb calls the glossy magazine “a tangible collection of our community’s stories and inspirations.” It’s a description that speaks to the brand’s core values and identity.

What started as AirBedAndBreakfast.com in 2008, when its co-founders rented out air mattresses in the living room of their San Francisco loft, has grown into a multi-billion dollar company with more than 800,000 listings in close to 200 countries—but maintaining a brand community is still paramount. “At the end of the day, what we’re trying to do is bring the world together. You’re not getting a room, you’re getting a sense of belonging,” co-founder Brian Chesky told Inc.

In a report on the next wave of social business, corporate research firm Altimeter Group named a consumer “desire for community” as one of the driving forces behind Airbnb’s success.

Airbnb may not be supplying the end product, but it’s sure selling an experience, and when a brand facilitates a P2P service it has to gain the trust of users on all sides. In the case of Airbnb, that means cosseting both hosts and guests. Its method of choice? Rich, community-centric storytelling.

AirBnb has taken an impressively comprehensive, multi-pronged approach to storytelling. Let’s take a look all the ways they’re using content to foster a sense of belonging and stay ahead of the pack.

For a community-driven brand whose livelihood depends on encouraging consumers to travel, creating digital neighborhood guides is an intuitive strategy. Airbnb Neighborhoods went live in late 2012 with the promise of delivering high-quality content coupled with advice from hosts. The seven-city collection has since expanded to encompass neighborhoods in almost two dozen locales around the world.

Maps and testimonials from travelers and residents do a lot to enhance the guides, each of which ends with a call to action inviting readers to share their local knowledge, but the cornerstone of this content is photography. In keeping with a tradition of enlisting professional photographers to elevate the appeal of its property listings, Airbnb relies on local photographers to capture a neighborhood’s vibe, and even posts their bios with each gallery. Neighborhood features are rounded out with popular area-specific listings to nudge visitors down the purchase funnel.

To demonstrate its commitment to supporting local communities, Airbnb developed its first Economic Impact Study on San Francisco. in 2012. Through host and guest surveys, bookings data, and assessments by local economists, it has since done the same in cities like New York, Paris, Sydney, and, most recently, Montreal. Hosts and guests can find the reports on Airbnb’s Economic Impact Studies site, where they can “learn more about the Airbnb community’s positive impact on cities around the world.”

The content serves a purpose beyond making the locals feel warm and fuzzy. Airbnb’s pioneering journey has been fraught with legal battles about such issues as zoning rules and hotel taxes. Hospitality laws from city to city are far from uniform, and the company’s business model doesn’t always harmonize with local regulation. New York’s “Illegal Hotel Law” prohibits residents from renting out an apartment for fewer than thirty days, causing the state’s attorney general to argue that almost three-quarters of Airbnb’s New York City listings are illegal.

Earlier this year the company incurred fines for similar activity in Spain. Even hosts themselves have been subject to penalties. In the company’s home city of San Francisco—and Portland, and New York—it has started to collect the required transient occupancy tax on behalf of its hosts.

Content like Economic Impact Studies—along with Airbnb’s recent sponsorship of the New York City Marathon and a feel-good ad campaign that included billboards in subways stations—helps to diffuse the legal drama and give the company a leg up in the court of public opinion.

Hollywood & Vines incorporated footage from a hundred Vine users all tasked with filming individual shots that were compiled into a visual story about “travel, adventure and finding your place in the world.” More than four minutes long, it’s generated nearly 350,000 YouTube views and has been praised for its considerable creativity.

A pair of Brooklyn artists who act as Airbnb hosts, a South Korean couple using Airbnb for a 24-country trip, and a chronically ill New Yorker for whom listing her apartment meant “protection from homelessness” are among those featured on the brand’s Stories site.

Because Airbnb’s audience is comprised of hosts who provide lodging as well as the guests who use it, in-depth features and videos offer insight into both experiences. Here, too, the brand underscores its focus on belonging by working with local photographers and directors to tell moving stories.

Birdbnb was created with agency Pereira & O’Dell and offered a delightful perspective on the brand’s listings by showcasing fifty birdhouses created by artists in the likeness of fifty Airbnb homes.

The campaign included a five-minute film that was played in select theaters as well as being featured online, and a microsite with bonus content like audio clips that introduced consumers to the artists and their process.

This past November another film was used to highlight Airbnb’s “Belong Anywhere” mantra. “We strongly believe in the power of good storytelling, and in recent months we have evolved our strategy to place the focus on our community,” said Airbnb’s head of global SEO, Dennis Goedegebuure, who led the project.

Wall and Chain was developed with Berlin agency VCCP and New York animation studio Psyop to commemorate the 25th anniversary of the fall of the Berlin Wall. It recounts the story of an Airbnb guest who traveled to Berlin for the first time since working as a guard during the Cold War.

Thanks to its remarkable twist, the video racked up more than 5.7 million YouTube views in its first month online. It further established Airbnb as a conduit for life-alerting travel experiences, and heightened the brand’s relevance.

Between a calendar of Berlin Wall-related events on the Belong Anywhere site and an interactive feature about Airbnb’s effect on the Berlin culture and economy (part of its Economic Impact series), the brand managed to insert itself into a timely global conversation.

This past summer Airbnb underwent a massive rebranding effort that included a new logo they named Bélo. In tandem with a site and app redesign consumers got an interactive tool that invited them to make the Bélo their own.

Users can visit Create Airbnb to customize the symbol by manipulating its color and shape, adding icons, and weaving patterns into the already-iconic logo. Graphic enhancements and color choices come with descriptions to help consumers infuse it with their own personalities.

The result can be saved to an online gallery with a story that reflects the creator’s experience using Airbnb, as well as made into merchandise like souvenir stickers and U.S. postage stamps to extend the experience offline.

To further promote Bélo and strengthen the consumer-brand bond, Airbnb created an infographic that dissects its meaning and encourages engagement with the Create tool. The visual was posted to the Airbnb blog.

Over the years, Airbnb’s blog has evolved into a content-rich resource for consumers. The Local Lens section shares individual narratives in a similar fashion to Stories. One post follows an Instagram photographer who made a weekend of snapping fall foliage in New York, while another taps third-party blogger expertise to explore Moscow’s cafe culture.

Throughout all of its content channels Airbnb makes a point of profiling its more interesting hosts, such as a Stockholm couple that lives a vegetarian lifestyle and rents out a souped-up 1976 school bus for $98 a night. Also included on the blog is a recap of this year’s first annual conference for hosts, where over forty countries were represented.

If other brand blogs read like a marketing requirement that gets in the way of the fun stuff, Airbnb’s is a gamesome wealth of content.

Recently it offered an exclusive look at the making of its new TV ad. The creative ad features a custom-built miniature world, which the brand’s head of APAC marketing said stands for Airbnb’s philosophy: “Making the world a smaller place.”

Airbnb’s content strategy extends to social media, where it embraces visual marketing to attract fans. On Instagram, the brand posts user-generated photos that it curates from its hosts and guests. Its YouTube channel is home to global content like the new TV spot, “Interning at Airbnb,” and “The Making of the Airbnb iPhone App.” “Wall and Chain” comes part and parcel with three behind-the-scenes videos that also live on YouTube.

The company uses Twitter and its Facebook page, which has over a million followers, to promote blog posts and particularly extraordinary listings. Seasonal and timely content collections like “Where to Stay for the TCS New York City Marathon” and “A Host of Haunted Homes” keep the feeds fresh.

Airbnb has come a long way since 2008. The company’s now valued at $10 billion—on par with hotel chains like Hyatt and Wyndham Worldwide. It’s the undisputed online room-sharing market leader, a model for collaborative consumption that has completely disrupted the travel and hospitality industries.

And it’s only been six years.

Are business innovation and technology to thank for the brand’s colossal success? Sure they are. But there’s no doubt digital storytelling strategies that kindle excitement by showcasing the people and places that make AirBnB truly unique deserve their share of the glory.