Forget McDonald’s decision to become a real-time cheerleader for every other Super Bowl advertiser, or Nationwide’s admirable quest to be the wet blanket at 25 million Super Bowl parties simultaneously—I want to talk about Denny’s Twitter game.

@DennysDiner doesn’t need to wait for a ubiquitous American entertainment event to shine in all of its high-cholesterol glory. The restaurant chain is fluent in weird Twitter and racks up thousands of organic engagements on a daily basis. While scrolling through their feed, I realized this was the first time I thoroughly enjoyed reading a brand’s Twitter account, which is just about the highest compliment I can give.

Don’t get me wrong: It’s pretty weird to enjoy reading someone role-play as a sentient restaurant—h/t @BrandsSayingBae. But take, for instance, the six-tweet streak they’re on as I’m writing this. How can you not love these?

Hell, even Denny’s sponsored ads about pancakes are pure Twitter with their sass:

All that pancake love also gives Denny’s an inherent advantage. It’s much easier to thrive on social when your product inspires passion. Folks love their breakfast food, and pancakes are the most ‘MERICA thing there is, a loophole that’s made it totally acceptable to eat five thin, fluffy cakes—smothered in syrup, whipped cream, and butter—as a meal. Hash browns are just French fries that you don’t have to feel bad about eating. And bacon is freaking bacon. As a result, people are excited to rep their breakfast food, particularly when it’s from Denny’s, the cheap 24-hour diner that’s always there for you when you have the drunchies.

But still, Denny’s work on social is worth applauding. They’re doing as good of a job as a brand can do on Twitter. And I’d really like to be able to report that it’s all thanks to one sharp 25-year-old in-house social media editor who’s kicking ass and taking names right now. That’d be a much better story than reporting that it’s the work of some ad agency that probably charges $5 million a year to send two tweets a day.

But of course it’s the work of an ad agency—Erwin Penland, to be exact. And it isn’t the work of just one or two people, either. “Day to day, we have a core team of five or six folks that really keep the ship sailing,” VP of Digital Strategy Kevin Purcer told MarketingLand.

In various interviews, Purcer has explained that his team tries to mimic the conversations that would happen at a Denny’s restaurant. Credit his team for hitting the right notes, and credit Denny’s corporate team for not freaking out when their account starts tweeting bizarre candy-themed Katy Perry fan fiction or when their popular Tumblr keeps posting mysterious missives about a broccoli apocalypse.

But most of all, give them credit for being the first item in our roundup of the best branded content of January. Props to Contently Assistant Editor Dylan Baker for compile this month’s selections.

In January, Denny’s released the seventh episode of “The Grand Slams,” their Adult Swim-esque mini-web series that’s quickly developing a cult following. The series follows four characters—Pancake, Sausage, Bacon, and Egg—on 30- to 40-second adventures inside a Denny’s restaurant. It’ll take you about five minutes to watch the entire series, and it’s well worth it. Things get pretty wild once everyone starts hittin’ the syrup, and the latest episode turns into a bit of a sausage fest.

Brands usually have a hard time making headway on Reddit, but not GE, which is quickly becoming the darling of the front page of the Internet. GE Reports, the brand’s excellent online tech magazine, is getting a particularly large amount of love from the Reddit, largely thanks a story about an innovative CT Scan machine that creates stunningly detailed 3D pictures of a patient’s organs and bones while exposing them to very little radiation.

GE’s story had legs and blew up far past Reddit. It was picked up by many other media outlets and quickly became a gateway for journalists to discover the other amazing stories on GE Reports.

“When [the CT scan story] sort of ran its course, suddenly we noticed that media outlets here in the U.S. and in Europe started publishing stories about another technology we covered—this really cool microscope that we made in life sciences, that can produce a really cool picture,” GE Reports Managing Editor Tomas Kellner explained to me. “When our CT scan became old news, there were journalists out there who still wanted to run on the story, so they went for the next thing… the reason they found out about [other GE technology] is because that story was featured below our CT scan story.”

To Kellner, that kind of continued reader discovery is the big advantage of creating an owned media publication like GE Reports as opposed to buying native ad space on another publisher’s site. “When you publish a discrete piece of native content, you can’t really do that,” he said.

The pomp, circumstance, and price tag of Super Bowl advertising is just begging to be made fun of, but for the past two years, Newcastle has been the only brand willing to capitalize on that opportunity in a big way. Or maybe it’s just that they’re the only brand with Aubrey Plaza on their side.

Throughout January, the Parks and Recreation star has been the perfect celebrity shill for Newcastle’s campaign to get a bunch of brands to band together and blow their marketing budget on a big-time Super Bowl ad. The final product is pretty much what you’d expect when you try to cram 37 brands into a 30-second spot, but the real gem is Plaza’s sarcastic, self-aware hype (anti-hype?) in the videos leading up to the finale.

Star Seattle Seahawks running back Marshawn Lynch has been refusing to talk to the press all year—and getting fined for it—but Skittles struck viral gold when they got him to open up. Since Lynch’s refusal to talk to the media has been a major topic of debate among narrative-starved sportswriters the past two weeks, every sports publication on earth had no choice but to share this Skittles video. That’s led to a big win for Skittles, and for Lynch, who comes across as a funny, awesome dude here instead of the crotchety, selfish caricature many talking heads have made him out to be. 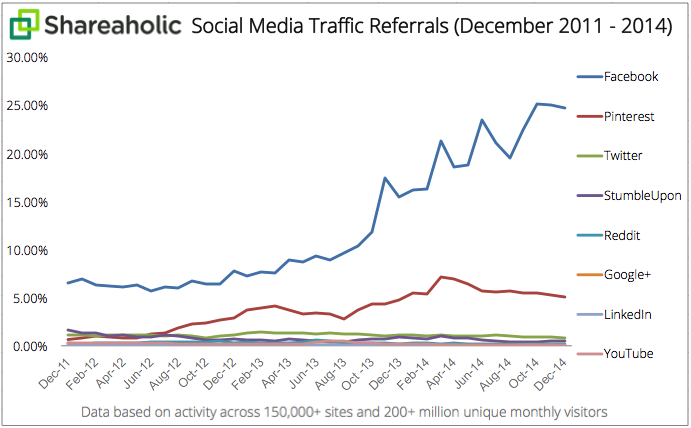 Shoutout here to Danny Wong at Shareaholic, a content amplification platform, which releases one of the web’s most fascinating reports each month: an analysis of social referral traffic trends across 300,000 sites and 400 million visitors. Their latest report in particular stood out, as it showed how drastically the social media power balance has evolved in the past three years. Between the (chart) lines, you can track Facebook’s rise to power over the past three years. It’s a great example of a B2B brand doing something great with their unique data.

I have to admit I’m a bit biased: I geeked out over this report for 1,300 words last week, and it ended up being one of our most popular posts of the month.

It’s got to be tough being a razor brand right now: The scraggly facial hair trend has long broken out of its Brooklyn quarantine and spread across the country. I’ve had a half-assed beard for 15 months now and I have no idea why. It feels like something that’s outside my own free will. Gillette must miss the ’80s more than Meatloaf.

But credit Gillette for not sitting on the sidelines and targeting the only thing we men value more than convenience—sex. For their latest campaign, Gillette teamed with Tinder to analyze who wins—scruffy dudes or clean-shaven chaps. The analysis of 100,000 guys between 18 and 24 found that those who keep it clean get 37 percent more matches. To take things a step further, Gillette recruited those scruffy dudes, shaved them, and added some clean-shaven pics to their Tinder profiles. The result? The clean-shaven pics led to a 19 percent lift in right swipes.

These results are, of course, 100 percent reliable because why would a razor brand want to mislead us about girls preferring clean-shaven guys? But still, it’s fun, compelling stuff—the kind of data-driven content that’s straight out of the OkTrends playbook.

In January, Squarespace decided to bring a wild idea to life: an album of sleeping tapes filled with “intriguing noises” and the soothing voice of Jeff Bridges. Why not? The microsite, DreamingWithJeff.com, is beautiful, and the tapes are weirdly comforting as Bridges’ coos things like:

“Sleeping tapes… I love that idea, and all that it implies, ya know? Sleeping tapes. Sleep, of course, implies waking up. Tapes implies recording. Sharing things. Sort of implies the past, the future, that’s recorded in the past and shared at some future time… I think that everything implies everything else here. Sleeping tapes.”

Best of all, if you buy the LP, 100 percent of the proceeds go to No Kid Hungry. Ultimately, I’m thinking that the hot new branded content trend for 2015 should just be letting Jeff Bridges do whatever he wants. Between this and his trippy spaceman cowboy Kahlua film, he’s earned it. For extra measure, Squarespace also turned these sleeping tapes into one of the weirder Super Bowl commercials we’ve seen in a while:

What was your favorite branded content in January? Tell me what I missed in the most condescending way possible @joelazauskas on Twitter. Responding to you will give me an excuse for not doing any actual work.