Brands love to insert themselves in conversations about hot topics, taking advantage of broadcast events, viral trends, and buzz-worthy news. Sometimes, it works out great. Other times… not so much.

Most of the time, the difference between success and failure is planning. While engaging audiences in real time does involve making some impromptu decisions, there are ways to prepare and strategize for creating social content around major events.

ShareThis, a company that makes social data actionable for publishers, marketers, and advertisers, just released its “Q3 2014 Consumer Sharing Trends” report. Surveying over 450 million users, over 3 million sites and apps, and 120 social channels across the ShareThis network, the new study provides an intriguing analysis of consumer sharing behavior from July to September 2014.

Its key findings can prove helpful for content marketers looking to optimize their strategies for creating custom content both in real-time and with programmatic tactics.

Here’s what you need to know: 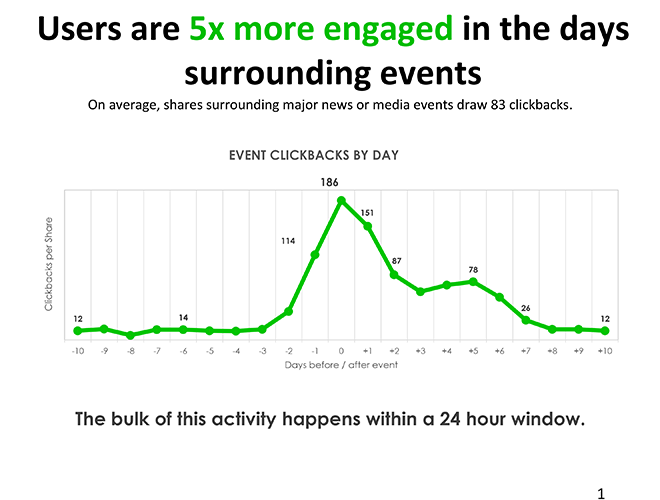 In order to tap this ready-to-click audience, content marketers need to be on the front lines of their content hubs and social networks. Still, showing up is only half the battle. Once you’re there, how can you make sure you’re pumping out the right content?

2. Give audiences what they’re looking for.

The obvious piece of advice here is to give people the content that they want. Is Apple doing a big launch event? Write about Apple products. Is Derek Jeter’s last game coming up? Tweet something clever and informative about Jeter’s historic career. While those are tried-and-true tips, for more buzz-worthy events, marketers should expand the scope of their content even wider than that.

ShareThis found that during the opening game of the NFL season, users shared 8x more sports content than normal—and it wasn’t all about football. In fact, content about soccer saw the biggest lift in shares. Similarly, during Shark Week, audiences shared 16x the amount of animal/nature content than usual, with a 13x surge in sharing of content about TV shows across the board. 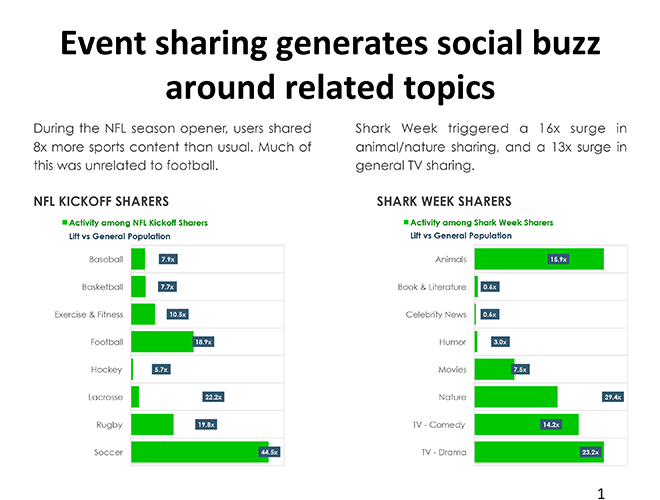 The report also found that event sharing is highly localized. For example, the earthquake in Napa sparked a social sharing surge in California and its bordering states. With this information, content marketers can customize their content based on the interests and concerns of a specific geographic audience. 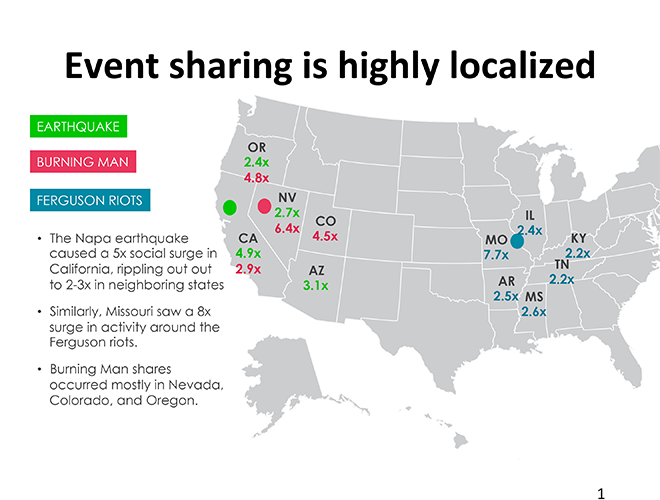 3. Know what your audience on each platform wants.

What are your social channels good for? Varying types of content, apparently.

In those precious 2–3 weeks surrounding a major event, Facebook is the place to have a steady presence, sucking up 85 percent of sharing activity. However, if you want to spike your traffic with quick, real-time content, Twitter and Reddit prove to be the most effective platforms for more reactive sharing, with Twitter activity reaching 3x its usual volume within 2–3 days of an event. 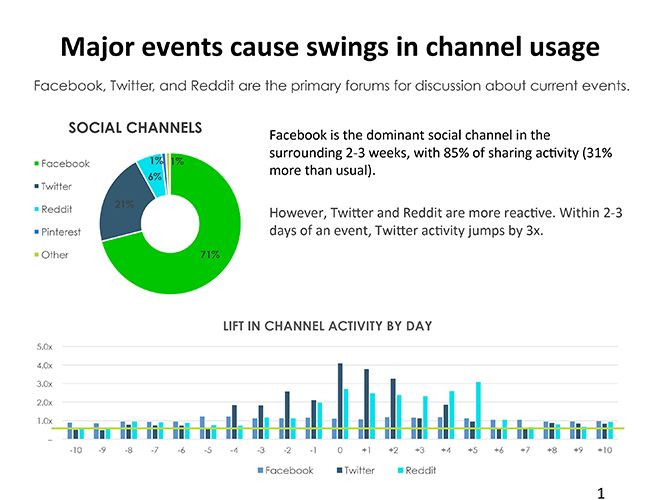 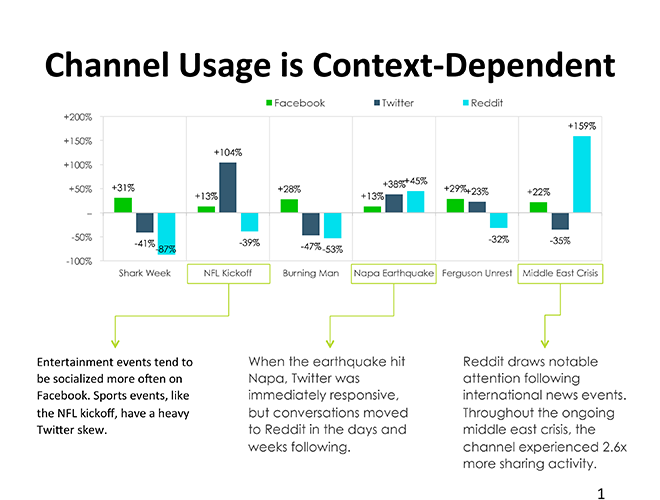 4. Meet users on the second screen (both kinds).

ShareThis makes a bold declaration: Tablets, not smartphones, are the true second screens.

While watching broadcast TV events, viewers were doing 2x the amount of sharing on tablets, presumably in real-time while the shows were being aired. For example, during the NFL kickoff, tablet sharing increased by 159 percent, while smartphone sharing only increased by 2 percent. 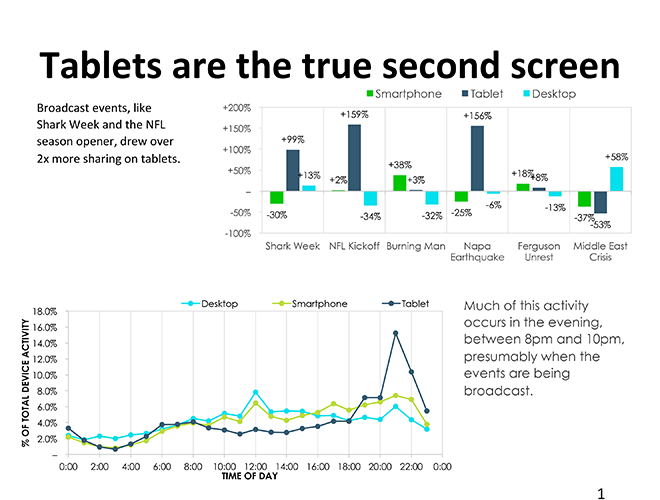 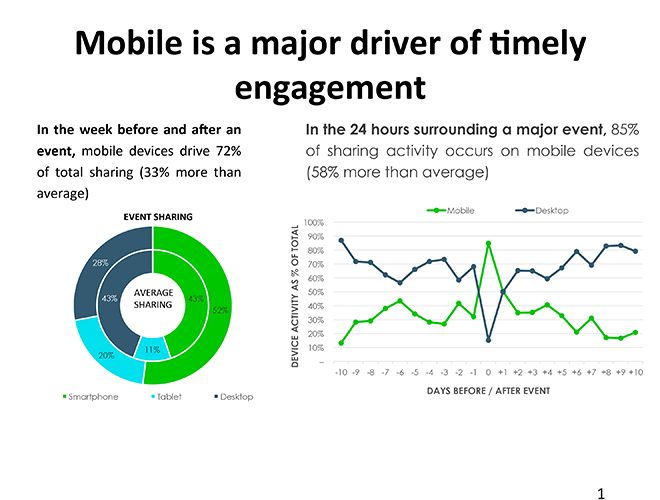 Any worthwhile content marketer is already laser-focused on mobile, but she has to also know how and when to leverage those devices for maximum content exposure and engagement.

Remember that high-peak sharing time within the first 24 hours of a major event, when sharing spiked by 5x? It turns out, users aged 18–25 are largely responsible for that, sharing 2.1x more often than usual around that timeframe overall. 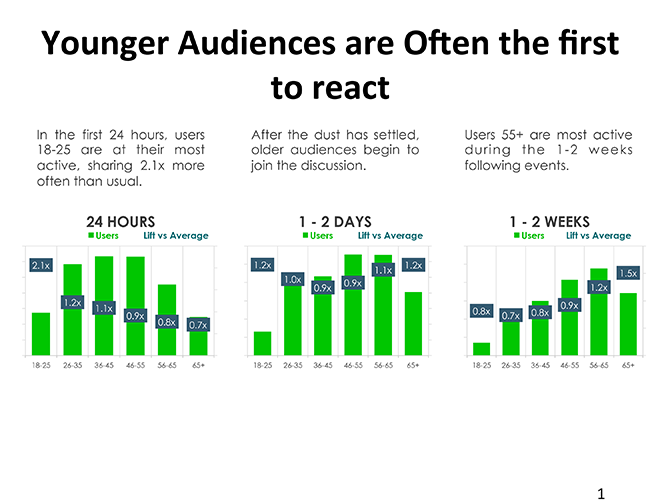 Older audiences shouldn’t be discredited, since they join the discussion in earnest in the days and weeks following the events. But when it comes to real-time engagement, content marketers should never underestimate the power of millennials and how they behave while using social media.