6 Storytelling Lessons From the Emmy Nominees for Outstanding Commercial

If you’re in advertising, you probably skipped over the Emmy nominees for “Lead Actor in a Drama” and went straight to “Outstanding Commercial.” This year, six advertisements were nominated, and all of them show an amazing amount of creativity. If you decide to watch them one after the other, you’ll go from laughing to sniffling in a matter of minutes.

But trust me, the emotional roller coaster is worth it. While all of these commercials are undoubtedly different, they all have valuable lessons to teach advertisers. What are they, you say? Glad you asked:

Lesson: Don’t underestimate the power of nostalgia… and ridiculous humor.

As Don Draper says in the classic “Carousel” episode of Mad Men: “In Greek, nostalgia literally means ‘the pain from an old wound.’ It’s a twinge in your heart far more powerful than memory alone.” While this quote is undoubtedly poignant and true, it fails to mention the equally alluring power of batshit absurdity. Probably because the word “batshit” would have totally ruined that scene. But I digress.

This Snickers commercial combines nostalgia and absurdist humor in a fantastic way. It turns out that if you turn the hulking Danny Trejo into Marcia from The Brady Bunch, people will remember it. In fact, they’ll call it one of the best commercials of the year. Kudos to the brave soul who had the courage to even say this concept aloud in a boardroom. They deserve a raise.

If you’ve got some extra time, check out how Snickers brought this idea to life. It’s worth a watch:

Photoshop is so popular that it barely needs advertising. However, it can be easy to forget that it’s used for more than just ridiculously mutating magazine cover models. This ad is compelling because it highlights the almost limitless capabilities of Photoshop, but has no narration whatsoever. Viewers understand the power of Adobe’s software just by seeing what it can create.

Lesson: Get on the right side of key social issues.

Appealing to the struggles that your consumers face will always put you in the right light. For example, Cannes started awarding the Glass Lion to work that addresses issues of gender prejudice. While Always was nominated for this award, the winner was BBDO India and Proctor & Gamble India’s “Touch the Pickle” campaign. The ads for the sanitary napkin Whisper aimed to get rid of the shame that is still attached to menstruation in India.

In other words, the time has finally come for socially-conscious companies to be rewarded for tackling big issues. Is your business taking on any big topics? If not, you might want to consider what social issues your brand feels strongly about and take action. For more examples, check out this round-up.

Lesson: Everyone loves a story about cute animals.

Especially if there are two of them. And they’re different species. And they’re best friends. D’AW LOOK AT THAT PUPPY’S FACE.

Sorry, sorry, I got a little carried away there. It’s important to remember that, while cuteness is effective for grabbing attention, it’s not necessarily a great strategy for building your brand in the long run. As Darren Bailes, executive creative director for VCCP, said in an interview with Campaign: “Using animals for their cuteness won’t work for long. It’s shallow and people move on from it very quickly… People are used to seeing real and complex stories on TV. Why should they demand any less of the advertising?”

This Budweiser ad is so memorable because sure, there are aw-inducing fluffy things, but there are more complex elements as well. “Lost Dog” involves one of the seven classic story types—journey and return. Viewers are familiar with this kind of story structure, which is designed to tug on heartstrings.

Oh, and a great hashtag for your campaign doesn’t hurt, either. As #bestbuds shows, the most obvious hashtag is usually the best one. The Budweiser puppy even has its own Twitter account! Although it’s apparently only for Twitter users 21+, according to the puppy’s profile picture. Which is really weird because he’s 13 at most in dog years. 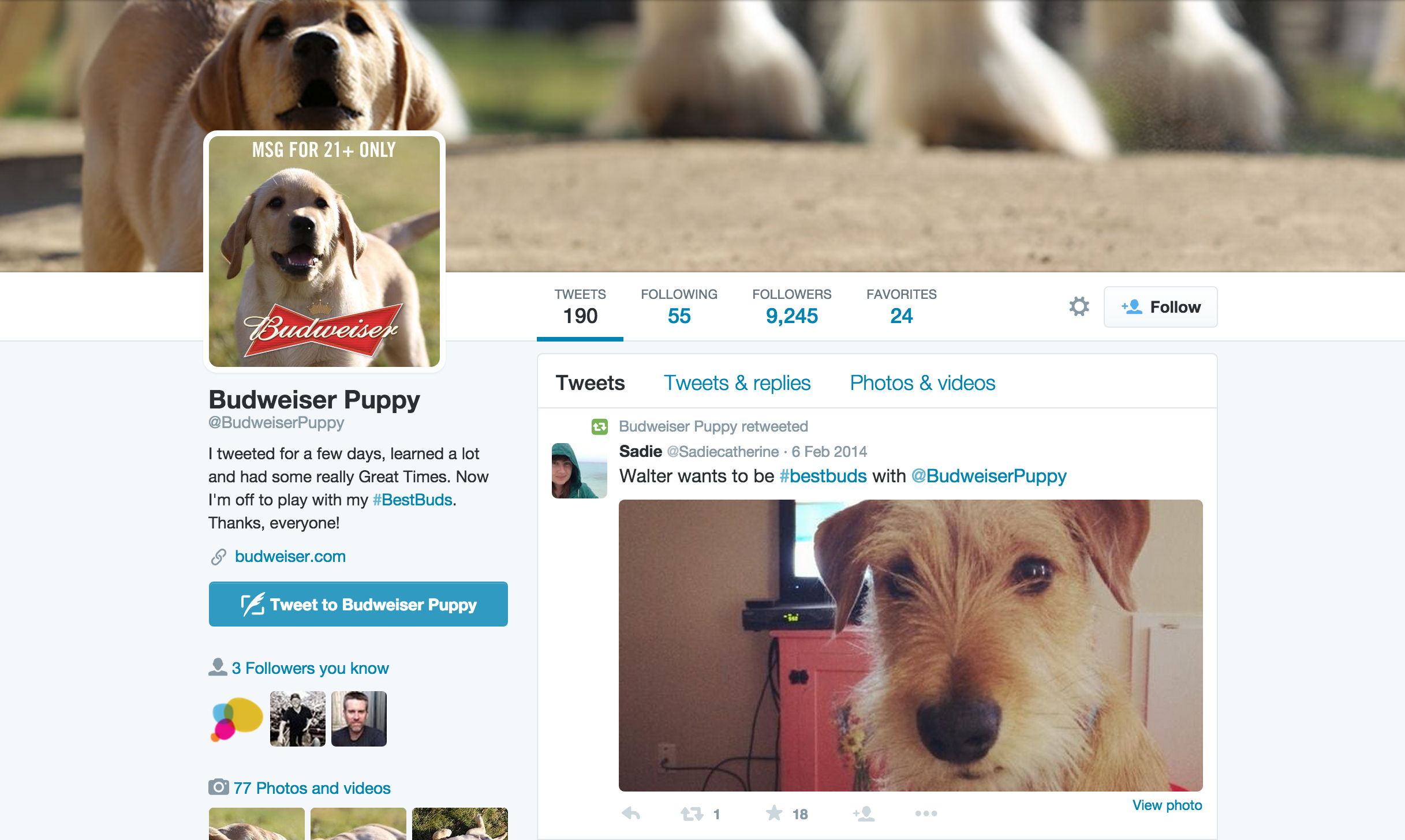 Lesson: What we just said about cute animals. But with babies.

Just like cute animals, babies are only one aspect of a memorable ad. Their big-eyed, drooly adorableness needs to be combined with a story in order to truly grab an audience. Nissan succeeds in creating this one-two punch in “With Dad.” The ad falls into one of the classic seven story types—a quest not only for a father to raise his son, but for that child to grow into his father’s figurative racing shoes. Excuse me while I reconsider letting my future children drag race.

Really, I can’t overemphasize the power of nostalgia. By showing New York City over the years, as well as the journey of one of its biggest sports heroes, “Made in New York” is a nostalgia Narnia. Plus, Sinatra is in the background. How can you not feel a little pang in your heart? Just from looking at the attention that this campaign received, as well as the wild success of other advertisements like Coca-Cola’s “Kissed By” series, it becomes clear that your company might want to consider a blast from the past.