The 7 Story Types and What You Can Learn From Them

When people would ask me what I learned in advertising class, I used to reply with whatever came out of my professor’s mouth most recently. However, a few weeks ago I was told that almost every story follows one of seven models. Soon, I realized that every great brand links itself with one of these basic plots. This has officially become my go-to fact.

If your company is struggling with its brand identity, then it might be a good idea to think about what kind of story you want to tell. After all, there are only seven types. How hard can it be, right?

To give you some inspiration, here are how seven major brands use one of the seven story types to drive their content strategy.

Dove’s mission is to “help the next generation of women develop a positive relationship with the way they look.” To meet this goal, the soap-maker has decided to tackle the unrealistic ideals of the beauty industry. In other words, Dove is David, and the rest of the media is Goliath. While this may be an unrealistic comparison given the fact that Dove is owned by Unilever— the same company that controls Axe— there is still a clear hero-versus-villain storyline threaded through all of Dove’s content.

Dove’s latest campaign, “Choose Beautiful,” encourages women to confront and discuss self-esteem issues. Their website features four videos, and women are encouraged to submit their own confessions on Youtube and interact on Twitter. The video below shows women making the choice between doors in a public building labeled “Beautiful” and “Average.” A surprising amount go through the “average” door without even thinking:

The goal of the campaign is simple in theory: for women everywhere to realize that feeling beautiful is in their power. Of course, achieving that mentality is easier said than done, and so is building an advertising campaign around it. Dove has come under fire of late, accused of manipulating women’s insecurities for the sake of advertising.

Ericsson didn’t need to rebrand; instead, it needed consumers to understand exactly what it did: telecom infrastructure and marketing. According to an article by Marketing Mag, “41% of all mobile traffic in the world runs through networks built or run by Ericsson, and the software development that goes behind world-wide mobile infrastructure makes it the the world’s fourth largest software manufacturer.”

Unfortunately, those facts aren’t exactly compelling to the average consumer. To make its focus more interesting and understandable, Ericsson produced a documentary to show how “entrepreneurs and change-makers are transforming our world.” The film, Networked Society, shows a range of people benefitting from how the Internet connects them to people across the globe.

One of the case studies focuses on a woman in Norway who makes a living by Instagramming her breakfast sandwich every morning—no kidding.

Another explores how Pete Cashmore, the creator of Mashable, is changing how people consume news:

Throughout all of this content, Ericsson highlights the benefits of connectivity in the modern age. Yet perhaps more importantly, the company explains what it does in an interesting way. Now people will understand Ericsson’s mission, and why it is important to them. In other words, the company is recreating how people perceive them.

There are few things that are more difficult than running a small business, and American Express exhibited an understanding of this struggle with its longform reporting series, “The Journey.” This nonfiction multimedia project was sponsored by American Express OPEN Forum, a website that caters to small business owners.

Creating “The Journey” was a quest, to say the least. As profiled on The Content Strategist, the project embedded journalists with Buchi Kombucha, a brewing company specializing in kombucha, for three months. Not just a day, or a week. THREE months. This focus on one company for such an extended period of time yielded some fascinating content—seven chapters with three short video documentaries, articles containing over 10,000 words total, and infographics showing the business’s best and worst times.

This kind of content not only highlights the quest that the two co-founders took to make their dream business a reality, but also the hard work that Amex put in to showcase Buchi’s struggles. In a dream world, every business would be just as committed to this kind of fantastic long-form content.

4. Journey and Return: Procter and Gamble

If you watched any commercial breaks during the 2012 Olympics, you probably saw this tear-jerker from Procter and Gamble:

The “Thank You Mom” ads don’t just show how athletes get to the Olympics—they also spotlight the under-recognized mothers who helped get them get there. There’s something immensely touching about giving mothers credit after an Olympian wins gold. The maternal sacrifices and heartfelt relationships with children is enough to bring tears to the eyes of even the biggest sports haters. Even more emotional is the moment when athletes finally win gold and get to thank their mothers.

P&G’s “Thank You Mom” campaign includes a series of videos on YouTube, each focusing on different mothers who helped their respective children reach the biggest stage in global athletics. The company even held a contest for people to nominate the important mothers in their own lives, and created a mama-exclusive Facebook page for the occasion.

As Rebecca Lieb, an analyst for the Altimeter Group, told The Content Strategist in 2012: “P&G is sending a more tacit message: These moms did something very, very right. They’re highlighting moms as heroes, giving them their moment of glory…. It’s smart associative messaging.”

Axe’s campaigns all promise that a spray of their cologne will transform even the most average Joe into a sex god. Exhibit A: 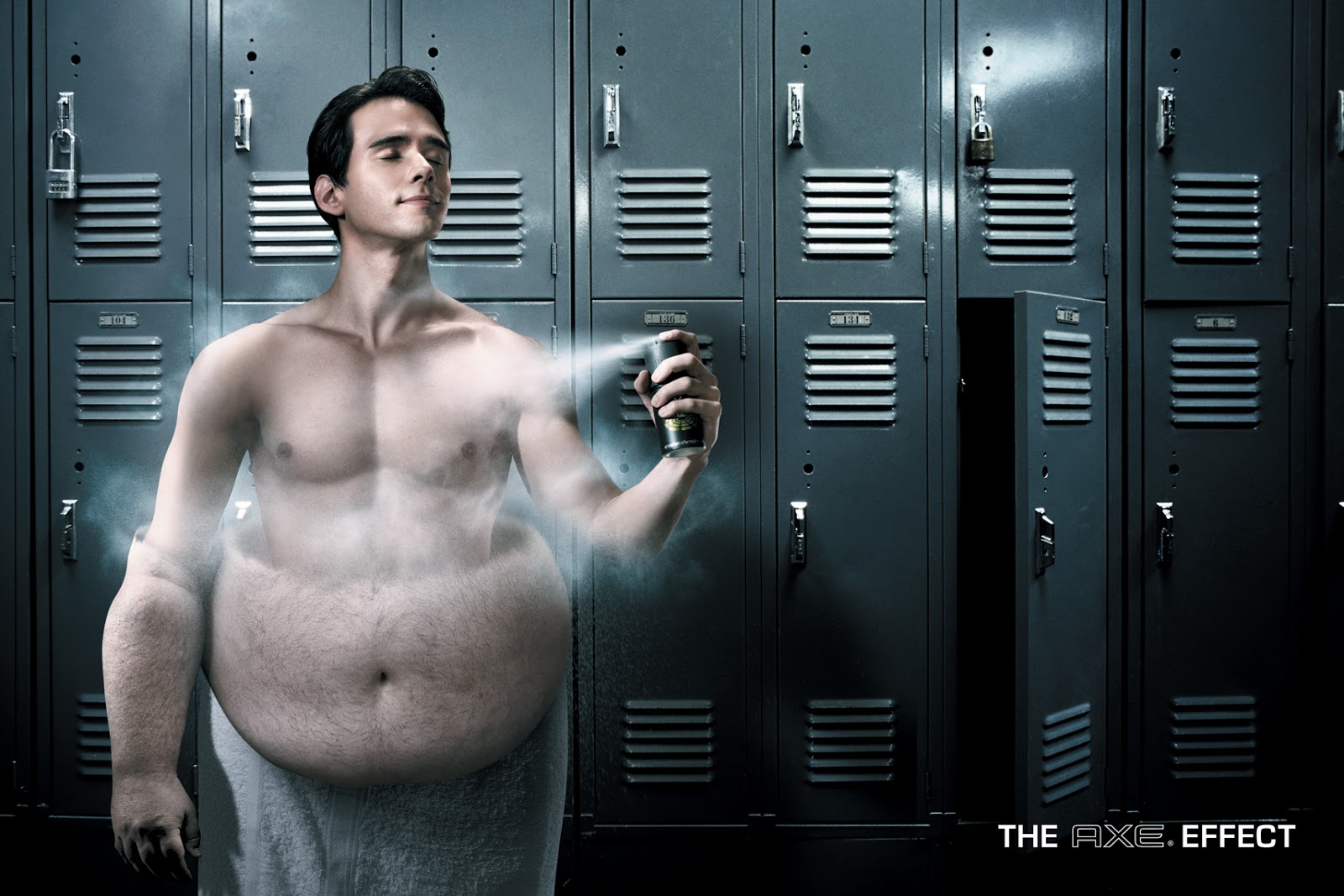 The company even released an (extremely tasteless, in my opinion) ad where a homeless man attracts a beautiful woman by spraying himself with some Axe he found in the trash. He becomes so utterly irresistible that it’s implied the woman even goes to town on his nether regions:

Not exactly a classy story, but a rags to riches tale nonetheless.

Instead of creating another ad along the lines of “These are your lungs on nicotine,” CPAA created posters that lodge themselves into your brain. The campaign, executed by Canadian ad agency Bleublancrouge, is called “Cigarettes Smoke People.” 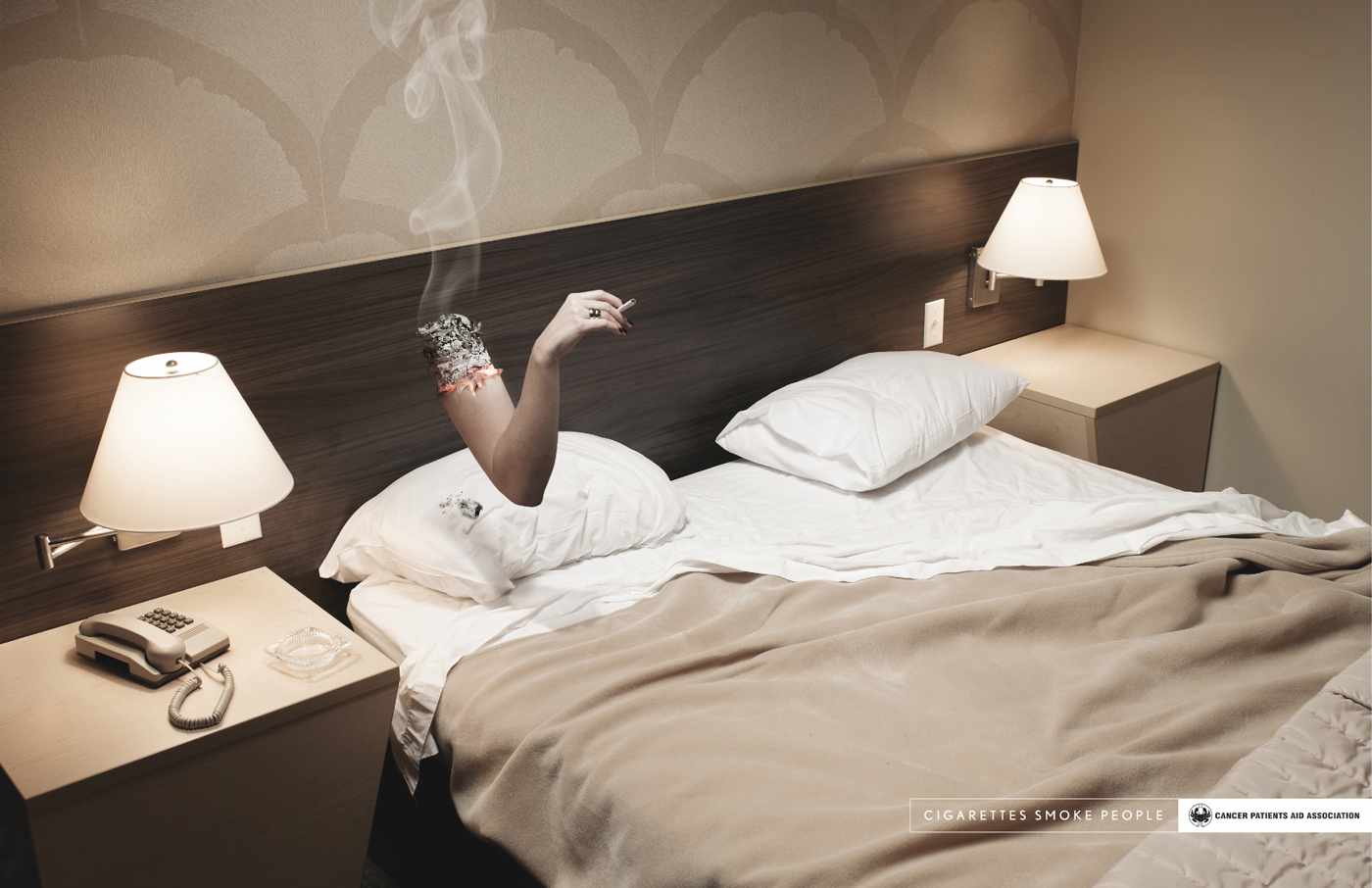 Not only are these ads visually interesting, but they also convey the poor health and loss of life that cigarettes cause. Furthermore, they’re extremely unsettling. Evidence of the actual human attached to the floating arm are visible throughout the ad, like the ashes on the pillow and the ruffled bedsheets above. However, as AdWeek notes, “The rest of the smoker might as well be invisible, doing nothing more than raising that cigarette for a few last puffs before the final burnout.”

Of course, advertising with tragedy doesn’t work for most brands. Unless you’re a nonprofit, attempting to do so usually looks tasteless. Learn from Hyundai, which once tried to sell new cars by claiming that it was impossible to commit suicide in the vehicles:

Needless to say, you don’t want to be known as the company who created something as distasteful as “Pipe Job.”

If you follow The Content Strategist, you’ll know I’m a big fan of Totino’s marketing. The company knows its audience—largely teenage boys who have the munchies—so it creates content its core consumers will relate to. Meet Tim and Eric, the Youtube sensations… and pizza roll spokesmen:

This clip includes wonderful touches like a game of pizza roll checkers and a man wearing cheese on his face. There are psychedelic visuals, feminine pizza bags, and a terrifying old guy named Punk Rock Joe. If you don’t get it, you’re just not part of the pizza-roll lifestyle. The fact that niche humor is used here gives the content a more personal touch for the target demo. And by personal, I mean that the video includes a rap song called “I Put Some Rolls In My Mouth.” I’m pretty sure only teenage boys can appreciate that.

The seven story types can help companies brainstorm exactly how they can show consumers what they’re about. As Rob Schwartz, TBWA‘s global creative president, said in a panel covered by AdWeek, “We talk about mission all the time, and it’s just another way of saying, ‘What kind of story are you on?”

Can you think of any other companies that have mastered one of the seven story types? Please let us know @contently.