Study: Video Posts Are the Key to Doubling Your Organic Reach on Facebook

Facebook’s algorithm is like #TheDress—it’s confusing, constantly changing, and divisive. Still, all hope is not lost. A recent study from Socialbakers sheds new light on the enigmatic topic.

Looking at data from 670,000 Facebook posts made by 4,445 brands between October 2014 and February 2015, Socialbakers found that native Facebook videos get more organic (unpaid) reach on average than any other type of post on the platform. 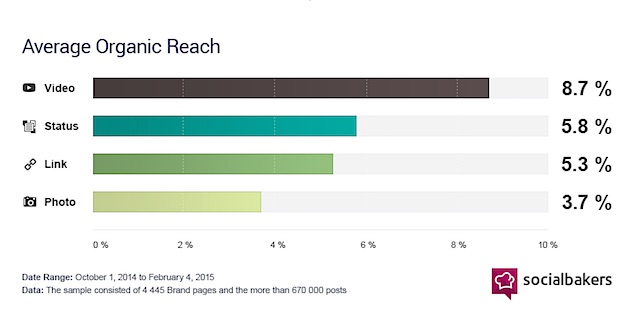 Here’s the confusing part. Photo posts used to have the most organic reach, but this new study found that photos didn’t just get supplanted by videos for the top spot; they dropped all the way to the bottom. Photo posts now have the least organic reach on Facebook. As Socialbakers points out, that’s a whopping 135 percent increase in organic reach, on average, when you post a video instead of a photo.

This organic reach doesn’t just apply for brands trying to reach new consumers. Brands’ fans (the people who Like their Page and opt in to follow their content) also prefer video posts, which saw a 148 percent increase in reach among this group. Photos are also blown out of the water in this category, with video posts organically reaching fans’ News Feeds 5.7 percent of the time, as opposed to 2.3 percent of the time for photo posts.

This, of course, is largely tied into Facebook’s push towards native video and their big plans to take on YouTube. (If you haven’t yet, read Dillon Baker’s excellent analysis of what Facebook’s native video plans mean for the content marketing world.) 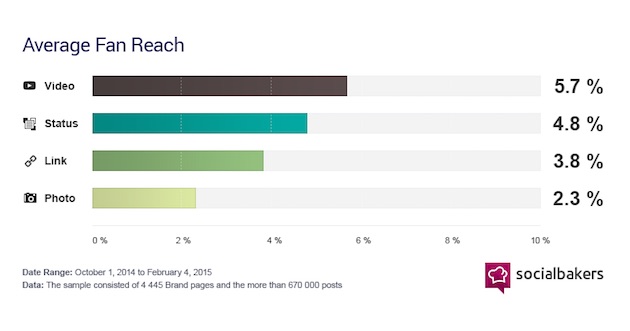 Mashable points to the ALS Ice Bucket Challenge, which went viral on Facebook last summer, as a prime example of how native Facebook video can be shareable and reach huge audiences. So if you’re ripping your hair out over Facebook’s frustrating algorithm, don’t delete your page just yet. Just develop a strong video strategy.