Facebook’s Reach Is Terrible, but You’re Crazy if You Delete Your Page

What’s my favorite piece of Facebook marketing over the past year? When Eat24 deleted their page with a hilarious breakup letter that quickly went viral. (Even CNN covered it.) Any sane person who read that brilliant letter had no choice but to fall in love with Eat24 and their marketing team. Plus, the insane amount of earned media that post generated was almost certainly worth any downside of losing Facebook as an advertising platform. The week after the letter was posted, Eat24’s app installs went through the roof.

“Funny story,” Eat24 wrote in an equally hilarious post-mortem. “App installs from the week following our breakup letter totaled 1.75x more than we got from all our 2013 paid Facebook ad campaigns combined. So… if we add the breakup installs to the paid ad installs, the ROI for that $1 million Facebook budget actually looks pretty good!”

Eat24’s breakup coincided with an industry-wide freakout after publishers discovered Facebook was shrinking organic reach for brands to one percent or less, and they started a bit of a Facebook-page–deleting movement that is gaining momentum today.

For most brands, Facebook is pretty much useless as a platform for organically reaching an audience; anyone who would rather have 100,000 Facebook fans than 10,000 email subscribers is insane. The paltry organic reach and engagement of some of our own Facebook posts have made me want to either punch the Hootsuite owl right in its beak or use his feathers to dry my tears. I mean, look at the depressing below chart from Forrester:

However, even with those sad numbers staring me in the face, I would never consider deleting our Facebook, and most other companies shouldn’t either. That’s because while Facebook sucks for organic reach, it’s a fantastic platform for paid content distribution and, in turn, for getting more email subscribers.

If you’re a content marketer or publisher who’s creating high-quality content, chances are your big concern is getting more readers. And if you’re smart, you’re not just relying on search and social for traffic; you’re also building an email newsletter so you can consistently deliver content to your readers and keep them coming back.

At Contently, that’s the position we’re in. We’ve grown to north of 200,000 monthly readers and 50,000 newsletter subscribers. Just by the nature of the compounding returns on content marketing, those numbers should increase if we keep publishing three or four stories each day. But of course, we always want to find a way to accelerate our growth.

That’s where Facebook comes in. We test out most of the stories we post on Facebook with an unpublished Facebook dark post. Basically, we pay $5–$10 to deliver each story to a target audience of marketers and see how it performs. And if it performs really well—like our recent interview with Seth Godin—we put more money behind it. (We have a relatively small budget for this kind of thing, so we spend it carefully.)

The CPC for these posts typically ranges from $0.15–$0.20, which actually undersells their cost effectiveness, since the numbers doesn’t account for the organic reach and clicks that occur when readers share your sponsored Facebook post. Our Facebook sponsored post for our Seth Godin interview, for instance, was shared 449 times, which resulted in 800 additional clicks and an organic reach of over 18,000.

However, we’re not just buying clicks; we’re investing in our long-term audience. The new readers we’re driving to the site stick around, spending nearly three minutes engaging with our stories on average—and per Chartbeat’s data, readers who spend three engaged minutes with a story are more than 50 percent likely to return within a week. Additionally, we try to make sure these readers return by prompting them to sign up for our daily newsletter, and nearly 5 percent do. Crucially, these new subscribers tend to be more engaged than our list as a whole.

Here’s what the whole thing looks like in a hastily-made flow chart that will likely make our design team very mad at me: 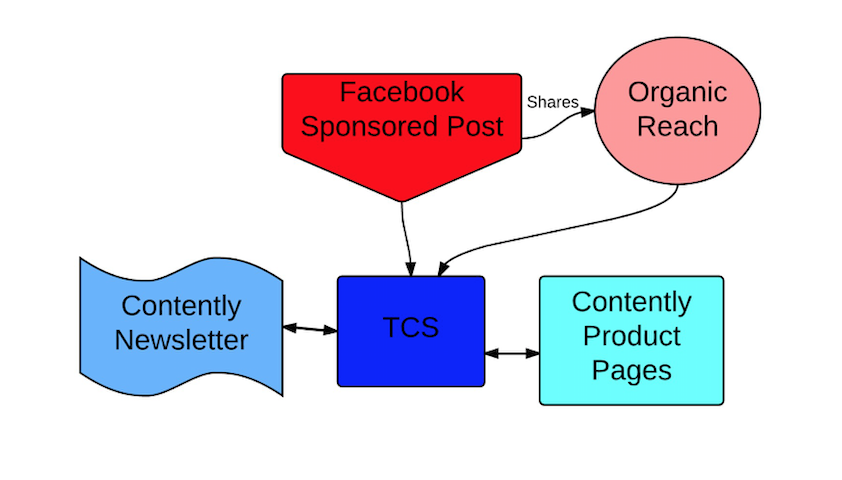 So through Facebook ads, we’re getting engaged readers who are likely to return. We’re getting email subscribers who will probably come back. We’re bringing tons of new people to our site who might opt to find out more about Contently’s services. In that light, the $0.15 CPC investment starts to look like a steal. And we haven’t even considered the fact that those new readers tend to share our stories like crazy on Twitter and LinkedIn.

Considering its targeting capabilities, cost-effectiveness, and ease of use, Facebook is one of the most important paid content distribution weapons marketers have. And brazenly deleting your Facebook page removes that weapon from your arsenal. Even if you’re not ready to jump into paid distribution today, you don’t know if that’ll be the case in six months or a year.

So, bottom line: You probably shouldn’t delete your Facebook page. Unless, of course, you can get your breakup to go viral. And if that’s your game plan, may I suggest a clever remix of “No Scrubs”?