Can Brands Really Publish at the Speed of News?

We can all agree the speed of news isn’t slowing down anytime soon. News cycles are growing faster; audience attention spans are growing shorter. For brands getting into the publishing game, this poses a serious challenge. How do you stay relevant while still producing high-quality content?

Hijacking a cultural moment can lead to short-term gains in exposure—think Oreo’s “Dunk in the Dark” tweet from the 2013 Super Bowl—but publishing at the speed of news is really about finding a consistent output. And that holds true regardless of whether you’re catering to the canine-obsessed or trying to reach the intellectual elite.

Letting the dogs out

How much content does your audience want to consume? For publishers of all kinds, it’s a crucial question to ask, and when cuddly pets are involved, that number never seems to be high enough.

“When you anchor something around such an intimate passion point like dogs, then there is this explosive reach you can have with your audience,” Grissom said.

At this time last year, BarkPost, which acts as the editorial arm of Bark & Co, had about 10,000 visitors per month; by January 2014, that number had grown to 2 million. Grissom told The Content Strategist that the editorial philosophy never wavered: “There are a lot of dog sites that focus on negative things. … We wanted to celebrate dogs and have a lot more fun doing it.”

The site runs between 15 and 20 posts per day. And since the articles and videos aren’t really tied to the news cycle, Grissom and her team can control their publishing pace. “Hopefully it will be 40 soon,” Grissom said at the Summit. “We want to pull you in with something you find interesting.”

And once you’re in, the thinking goes, you’ll engage with multiple pieces of content. BarkPost covers a wide range of topics related to dogs—everything from lighter fare like “17 Things Only Senior Pup Parents Understand” to reported articles such as “What It’s Like for Dogs in Iraq, Told by a Veteran.”

By now, the site is a well-oiled machine. The staff consists of a few full-time writers and approximately 20 freelancers. Still, when brands come in as partners, challenges pop up. For example, BarkPost is working with Sony to help promote the upcoming remake of Annie, so Grissom had to adjust when legal teams got involved.

“Even if the partner we’re working with isn’t flexible or speedy, we have to be,” she said. “It’s finding a balance of making sure they’re not taking away components of the campaign that are going to resonate with the audience, and we shouldn’t have an ego for changing things that don’t really matter that much.”

Finding the right color for the Gray Lady

On TCS, we’ve closely covered T Brand Studio’s progression from unsure proposition to arguably the top native publisher in the game today. When John Oliver is condemning the idea of native advertising while still smacking you with back-handed compliments on Last Week Tonight, you must be doing something right.

The studio has already partnered with the likes of Netflix, Goldman Sachs, and Cole Haan. And their latest production, a multimedia travel project with Google Maps, took months to create. Thus far, it seems working under a strict editorial umbrella like The New York Times Company requires a slow-burn approach.

As Aston told the crowd at the Summit, becoming a native force took patience. “Each group that we work with, we’re finding there’s a learning curve,” he said. “We haven’t moved toward a higher-frequency newsroom model, but I have a feeling that will happen.”

Production has hovered around three projects per month, but it’s worth pointing out The New York Times didn’t start publishing native content until January. As the projects grew more ambitious and creative, T Brand Studio found its footing and became more familiar with the end-to-end process.

“The industry as a whole is getting more sophisticated,” Aston said. “Some of the brands and sophisticated content studios doing their own work, when we come into contact with those folks… we’re starting about five steps ahead compared to that initial conversation where there’s some apprehension about going this [native] route.”

And while some may think being The New York Times leads to leeway with legal teams, Aston was quick to point out balancing journalistic responsibilities with corporate interests has still been a complicated process, specifically, when working in the realms of pharmaceuticals and finance. However, moving forward, he believes speed will come organically as brands and publishers learn the nuances of working together.

“It’s something I feel we collectively have to get better at, and we’re rapidly getting smarter.”

For more on this session, check out the excellent graphic notes by Kelly Kingman below. 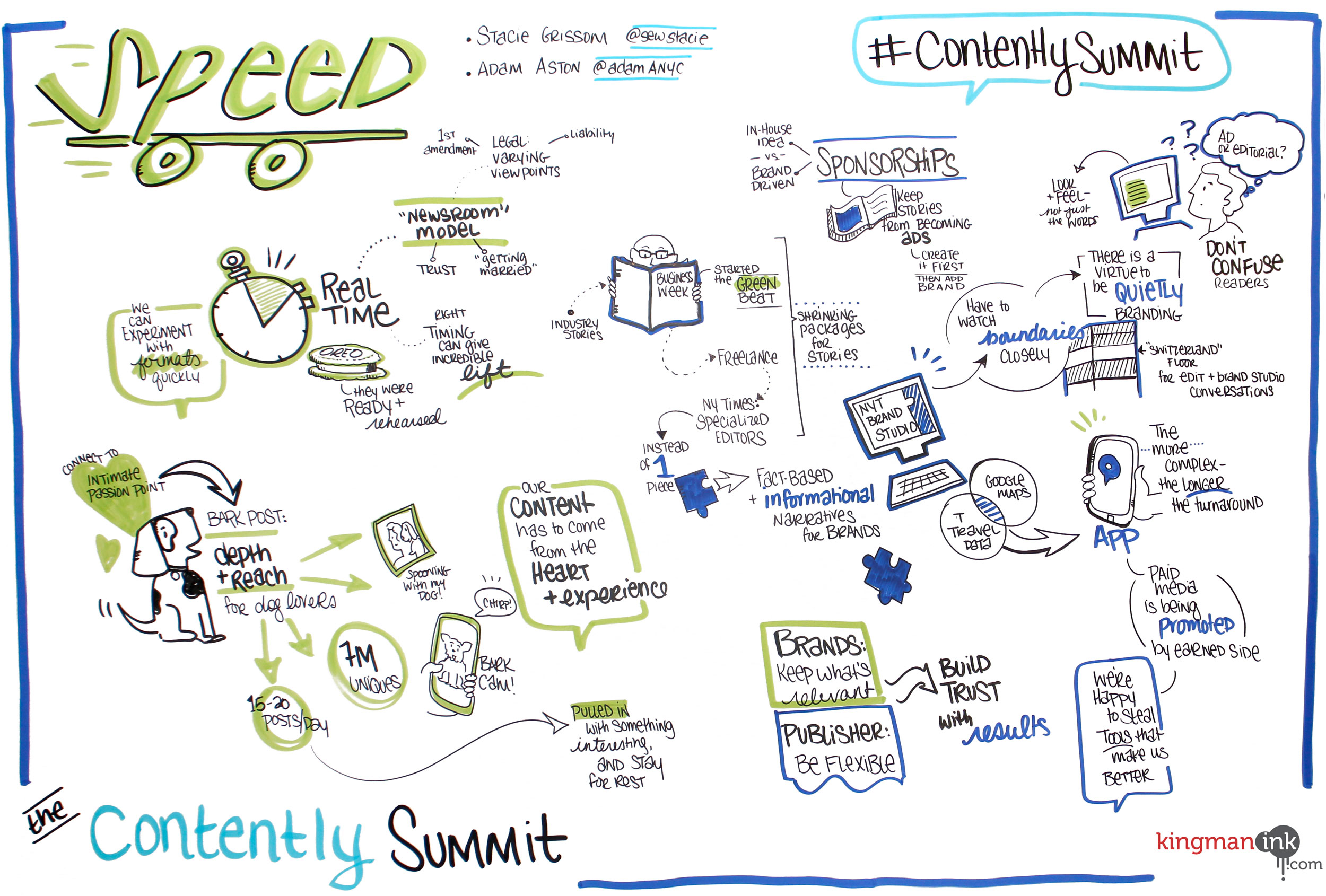