Earlier this year, HBO gave the practice of native advertising a mild drumming when Lena’ Dunham’s character, Hannah Horvath, went to work for the branded content department at GQ. Her friend Ray slams her by saying, “It’s obviously one of those advertorial sections where it looks like it’s a real article, and then you realize that it’s a paid advertisement.” Hannah furiously responds, “Do you think that I think this is the best use of my literary voice?”

But HBO didn’t stop there. On Sunday’s Last Week Tonight With John Oliver, the network took their commentary on the separation of business and journalism up a notch and completely annihilated sponsored content. Needless to say, it was hilarious.

Oliver started off his rant by noting that he was lucky to work for advertisement-free HBO, where he is free to say that “Old Navy makes you look like a tacky murderer.” After that, Oliver delivered 11 full minutes of pinpoint jokes about native ads. Few escaped the fire, with The New York Times‘ Meredith Levien, TIME Inc. CEO Joseph Ripp, and BuzzFeed co-founder Jonah Peretti on the receiving end of Last Week Tonight’s hottest burns.

Oliver even had the cojones to make fun of himself. After all, the premiere of Last Week Tonight was promoted with a series of BuzzFeed listicles: 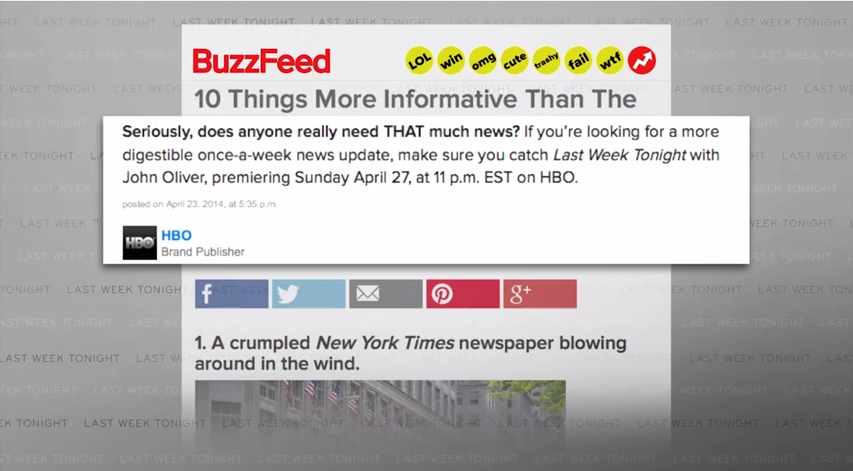 Oliver even brought in some of the latest research into his rant, referencing a recent report from IAB and Edelman that found that less than half of readers could recognize native advertising.

Yet the HBO host did acknowledge that publishers need to keep the lights on. Consequently, he offered a compromise: “Every time advertising sneaks into our news and ruins it, our news should be able to sneak into their advertising.”

Skip to the 10:40 mark to see what that looks like. And watch the whole thing. It’s awesome.