A lot of people would probably tell you a 30-second TV spot and a branded Vine are on totally opposite ends of the marketing spectrum. Those people probably don’t work in Hewlett-Packard’s marketing department.

In August, HP began promoting the Pavilion laptop by launching the first TV spot made up entirely of Vines the company had been posting on their own accounts and various accounts of Vine stars like Robby Alaya. It quickly amassed over 10 million loops to become the most popular Vine ever.

New-wave digital and traditional advertising are quickly colliding. Before long, we may forget all about the traditional commercial and turn instead to the six-by-six-second spot:

In addition to a slew of Vine views, HP has earned over 3.6 million views from the commercial above. But they weren’t the only big winners this month. Let’s take a look at the rest:

Listen, y’all need to hear this latest jam from… a GE jet engine?

GE and The Barbarian Group partnered with American DJ Matthew Dear, teaming him up with GE acoustic engineer Andrew Gorton to make one hell of a track titled “Drop Science.” The surprisingly good song was “created by fusing together over 1,000 samples of the sounds found inside GE research centers,” including jet engines, according to Digiday. I may even be listening to it while writing this piece right now.

Along with m ss ng p eces—a production company whose name is the bane of copy editors everywhere—Barbarian and GE also made a documentary about Dear’s quest to make this bonkers track.

But most importantly, the collaboration has allowed me to listen to branded content while writing about branded content, and I will now melt into a giant pool of meta.

In August, the Irish government announced that the country would hold a referendum on gay marriage early in 2015, which was pretty much a cue for ill-informed, conservative paranoia to sweep through the country. LGBT Noise was quick with a preemptive counterattack, releasing a hilarious satirical short film, “ARMAGAYDDON,” which depicts a straight couple in 2017 bunkered down in their home as if in the midst of a zombie apocalypse.

It’s been viewed over 232,000 times on YouTube over the past two weeks and will hopefully stave off anti-gay fear mongering leading up to the vote.

Including the Emmys in these rankings feels pretty unfair—of course they’re going to promote the show with something star-studded and awesome! But this parody of reality TV show Pawn Stars featuring Bryan Cranston, Aaron Paul, and Julia Louis-Dreyfus is just too good not to include.

Sonic: Back to School Summaries

Engage your audience! Deliver value! Tell a story! This is the kind of stock content marketing advice you can expect to hear from all over this content marketing season. But man, did Sonic check off all those boxes in August.

On Facebook, Sonic invited their 3 million fans to request a 10-word summary of their summer reading. 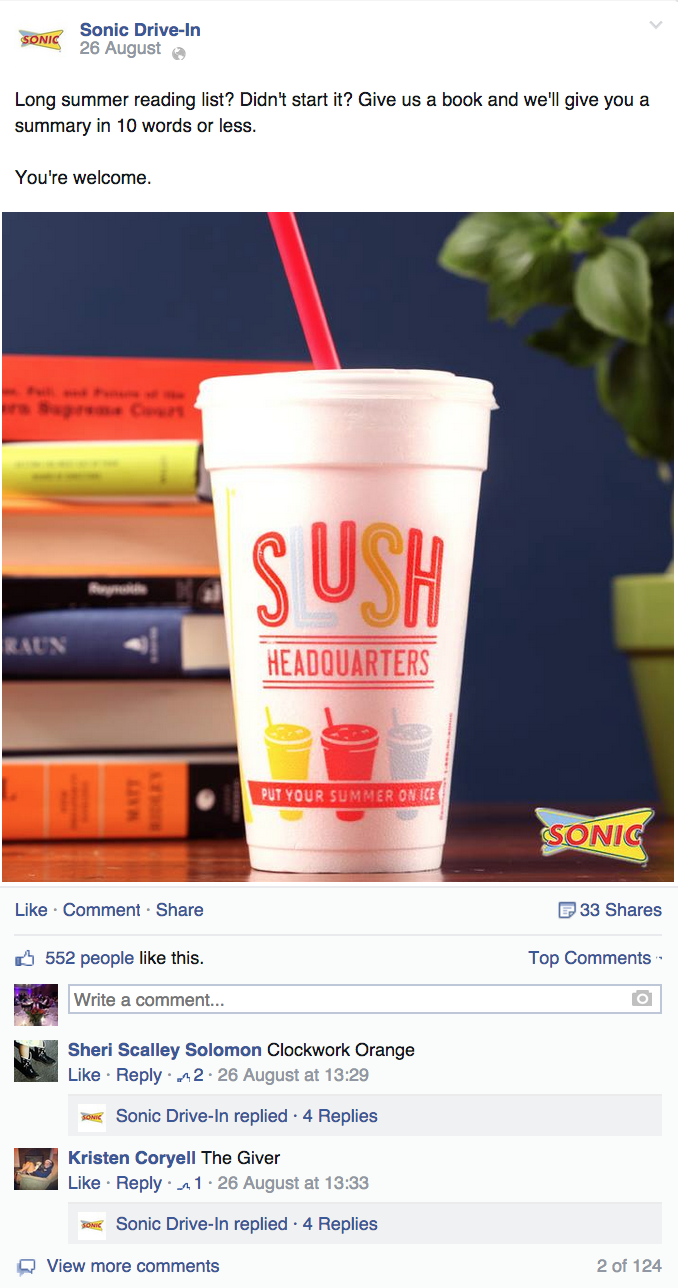 That’s just a small sampling. There are a solid dozen worthy of a hearty round of applause.

With ALS Ice Bucket Challenge fever (chills?) sweeping the nation, it probably would have been grounds for firing if no one at Samsung thought of dumping ice water on the new waterproof Galaxy S5. And then they took it a step further by challenging the iPhone 5S.

Not only did someone at Samsung keep a job, but that person also helped generate over 4.5 million views. And as we wrote last week, the ALS Ice Bucket Challenge itself is a case study in great UGC marketing.

How can you match the first time you saw the Manning brothers rapping in ridiculous outfits? The answer is you can’t—for NFL obsessives like me, “Football on Your Phone” was like falling in love for the first time.

That being said, Eli and Peyton’s rap-video sequel, “Fantasy Football Fantasy,” is pretty darn good too:

It’s bizarrely psychadelic. Eli’s wearing camo pants! Peyton’s rocking the gold chain! Joe Namath is grinding up on someone’s mom as she makes stew! Why am I so excited?!

Speaking of fantasy-football-themed branded content sequels, the second season of Lenovo + The Onion’s hit fantasy football mockumentary “Tough Season” is back. It’s a cutting parody of Hard Knocks and filled with NFL stars saying silly things like this great quote from Wes Welker: “I’ve been working on my intangibles. Grit. Hustle. Thinking tall. Just wanting it more. Also, catching touchdowns for points. I’m not an alien. I know how fantasy football works.”