RZA Is Creating Exclusive Tracks for Dr Pepper. Here’s Why

Renowned hip-hop producer RZA has a new track for you, but it won’t be available for download on iTunes. Instead, it will live as a piece of streaming, branded content on Complex.com.

That’s because RZA’s upcoming EP, Only One Place to Get It, was born in a music studio assembled by Dr Pepper and Complex Media.

“Many brands want to use music as a way to connect with millennials,” said Moksha Fitzgibbons, EVP of sales and marketing at Complex Media and the head of Complex’s branded content studio. “Brands bring in music artists and sign them up for TV commercials. We say, ‘That’s great, but if you want to create a rich partnership, you have to go deeper.’”

Indeed, entertaining the millennial male audience is a huge challenge for brands and media companies alike. For Complex Media and Dr Pepper, the solution was to hire emerging artists (Robert DeLong, Rockie Fresh, Tinashe, and RAC) and established music producers (RZA, The Hood Internet, and David Andrew Sitek), and have them release three tracks over the next two months, all live-streamed on Complex.com/DrPepper. 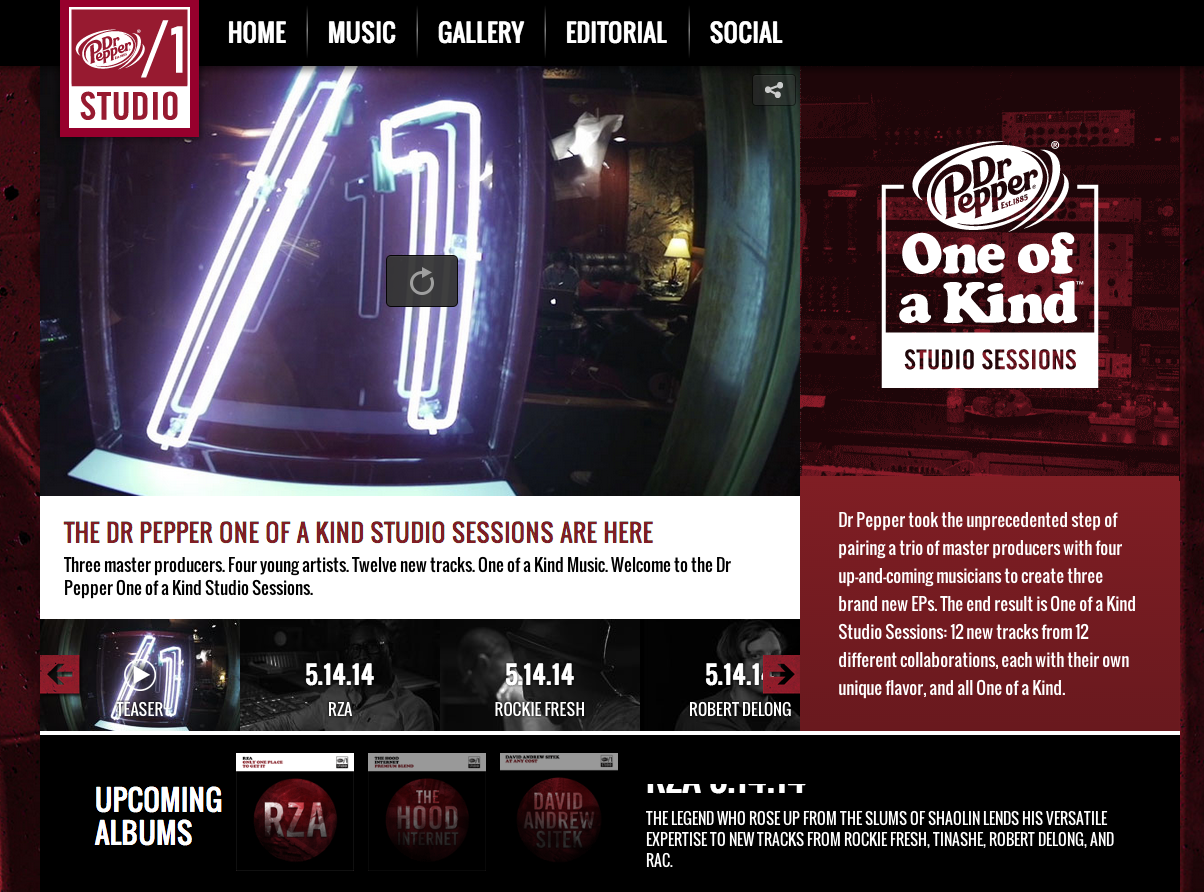 Dr Pepper’s Los Angeles-based music studio is furnished with Dr Pepper swag alongside state-of-the-art recording equipment, and the artists are free to create whatever tracks they want. However, they are strongly encouraged to write about being “one of a kind,” Dr Pepper’s message for the campaign, which kicks off May 14 with RZA’s Only One Place to Get It.

“In this sense, Complex acts as the publisher and curator of the music,” said Fitzgibbons. “We power it across our 120 sites, and put it out on Facebook, Twitter, Vevo. The idea is that everything will redirect back to Complex.com/DrPepper.”

Fitzgibbons added that Dr Pepper will be doing the same on its social channels in hopes of getting as many fans as possible to engage with the new site.

Dr Pepper will measure the success of the campaign by looking at unique users and time spent with video, and they’ll examine data from Dart and Comscore to make sure they’re reaching the right millennial consumer. Dr Pepper will also be tracking social interactions and calculating the numbers of likes, retweets, and shares with Social Flow, a social monitoring tool.

Each of the tracks will be free to stream, but fans won’t be able to download them, which will ideally keep them on the site longer. The site will also feature behind-the-scenes videos and interviews, profiling each artist and producer involved in the project.

This is far from Complex’s first intensive branded content initiative. In mid-2013, Mountain Dew partnered with Complex to launch Green-Label.com, an online lifestyle magazine for young, urban males. The branded media hub includes a team of journalists and a pool of contributors who are influencers in the world of extreme sports. And last year, Converse created a “Snow Fall”-style narrative for Converse called “The New New.”

“The big key thing is creating a platform that doesn’t live in its own silo,” explained Fitzgibbons. “The site is part of Dr Pepper’s overall strategy with other platforms like Spotify—the music can be woven into other key tent poles for them. Let’s bring in the best in class and have them work together around a core idea, which is the studio.”