In 2014, Red Bull no longer has the only brand newsroom riding the extreme sports wave. For years, Mountain Dew—PepsiCo’s popular, edgy brand—has been publishing content all over the Internet. This initiative, known as Green Label, launched in 2007 on the common medium in those days of yore, the microsite. That same year, the company rolled out the Green Label Art initiative on a separate microsite. In 2009, there was a branded web series and interactive game on the then-red-hot social network MySpace. That project was moved to a distinct web location and has since disappeared. And finally, Mountain Dew’s Green Label Sound produced albums and live conferences. All of the scattered digital results made it tough to comprehend just exactly what Mountain Dew was doing. But last year, all of the streams started coming together, resulting in one of the industry’s most impressive content marketing case studies.

Bringing the Dew to you

In 2013, Mountain Dew created Green-Label.com, a central media hub serving a crucial a segment of its consumer base: young, urban males. The brand partnered with Complex Media, a network of content sites targeting young males that runs its own ad network. The joint venture also included a unique twist. While Mountain Dew is paying Complex in a multimillion-dollar, multi-year deal to produce the site, Complex is also contributing some resources in exchange for a cut of ad revenue. The Dew has been promoting action sports for more than 20 years and continues to grow its audience of millennial males through that realm—much like Red Bull, which has five million paid subscribers to its magazine, The Red Bulletin. “We’re continuing to try to deepen our roots in that world,” says Jamal Henderson, PepsiCo’s senior brand manager for Mountain Dew. That means transitioning from campaign-based marketing to always-on content marketing through Green Label. According to Complex Media’s head of sales and marketing, Moksha Fitzgibbons, “The idea has been to establish a platform that is one hundred percent owned by Mountain Dew where they can credibly create content and develop community around the pillars they want to be aligned with—action sports, fashion, sneakers, and emerging music within multiple genres.” Green Label publishes eight to 12 original pieces each day—everything from news briefs to multimedia stories. Recent stories on the platform include a listicle of Oscar-nominated movie posters in LEGOs and a replay of the best moves from skateboarder Paul Rodriguez.

Mountain Dew’s brand masthead is filled with veterans of the journalism world. Editor-in-chief Brad Clarke is a veteran lifestyle journalist who came to Green-Label from High Snobiety’s Radcollector. The editorial team includes a deputy editor and five dedicated writers, as well as a full photo and video staff. The extended pool of contributors consists of people who are “influencers,” including independent bloggers, photographers, designers, and skaters. The editorial team loves having the ability to do longform journalism and work on content that excites them, says senior manager of content marketing Aron Phillips, who heads the content marketing team at Complex Media. Phillips came to Complex from Dime, where he was a staff writer for the magazine. “I thought this was where the industry was headed, and it was an amazing opportunity,” he says. “The only hesitation we heard was, ‘How much integration does the brand have?'” In other words, would they push for more logos, product placements, and overall product plugs? Thus far, Mountain Dew has maintained a balance with the branding—something that isn’t incredibly hard to do in the world of extreme sports, Green Label’s focus, where logos cover every inch of equipment and clothing. Mountain Dew has developed plenty of credibility with its lavish sponsorships over the years. “All of Dew’s celebrity talent relationships have really embraced the site. When they are doing something cool, they let us know what’s going on. Those are easy places where we can obviously develop content,” Phillips says.

Before the site went live, Phillips and Complex created a brand book illustrating the overall aesthetic for the site design, logo, and user experience. The key to creating a compelling and interesting site, they believe, is to balance Mountain Dew’s marketing goals with strong editorial leadership. The brand team (led by Henderson) and the editorial team have a weekly in-person meeting to plan content. “Every story we post has been conceived in partnership with and read by the Green Label editorial team and the brand marketing team,” Phillips says. 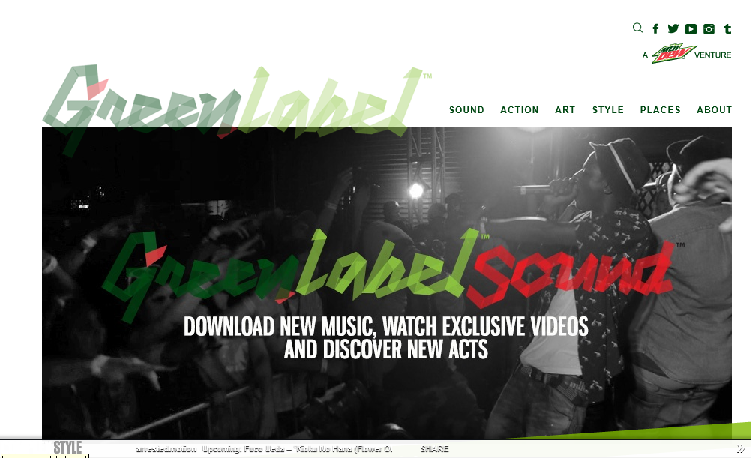 During the meetings, the editorial team discusses strategy and hears about various Dew promotions, events, and launches. “Jamal is able to tell us what they are doing for forthcoming months, and we create content in lockstep with them,” Phillips says. “[Mountain Dew] knew what they were getting into. They look to us as the experts for creating content.” Additionally, editors always keep on eye on their stats to drive decisions. They use Chartbeat to track real-time data about what stories are trending. SocialFlow provides similar tools for social media posts. And Google Analytics is a stalwart for analyzing traffic patterns. In its first six months, Green-Label.com has averaged 10 pageviews per visit, with average time spent at four minutes per user—impressive stats indeed. The 65 million impressions on Facebook and Twitter are just icing on the cake. Because of Mountain Dew’s impressive traffic, Complex Media plans to start selling third-party ads for the site, with advertisers approved by Mountain Dew—moving Green Label one step closer to becoming a profitable media operation. In other words, they’ll be able to have their soda and drink it, too. This story has been edited to elaborate upon the nature of Mountain Dew’s deal with Complex to produce Green-Label.com. Contently arms brands with the tools and talent to become great content creators. Learn more.