Update: Comcast finalized the deal with BuzzFeed for $200 million at a $1.5 billion valuation.

As The Awl’s John Herrman wrote in February, we’re rapidly seeing user loyalty gravitate towards platforms where there are other people around to share in the fun: primarily social networks and chat apps. Facebook, Twitter, and Pinterest have all continued to grow steadily, while chat apps have absolutely exploded. Initially, publishers treated these social networks as benevolent drivers of traffic, flooding them with article links while incessantly encouraging their users to do the same. The social platforms and chat apps are now where everyone spends their time, because modern Internet users primarily want one thing: to get their dose of content and people all in one place.

What’s missing in this whole equation is the publisher’s website, which has quickly emerged as an annoying and lengthy extra step for users. Whereas publishers’ sites often take 10 or more seconds to load because of bloated ad and tracking scripts, content hosted natively on Facebook loads almost instantly—a small but ultimately profound difference in user experience.

Facebook proved that last summer when native auto-play videos grew exponentially, giving it the foundation for an argument it took on a road tour to publishers. It went something like this: “Your websites are antiquated and inefficient. Publish content directly on our platform and reap the revenue rewards.” Even the name of the initiative, Facebook Instant, plays up this idea of efficiency and speed. Lo and behold, an initial group of “elite” publishers quickly accepted Facebook’s argument that their sites suck, including National Geographic, the Guardian, BBC News, The New York Times, BuzzFeed, and NBC News.

This deal marks the culmination of a new way of thinking about media companies: Not as publishers as they were during the print age and the first two decades of the web, but as something much closer to the digital media equivalent of Hollywood studios—creating content that is distributed and hosted on large channels outside of their control.

BuzzFeed, more than any publisher, has embraced this new reality. As BuzzFeed founder Jonah Peretti told Re/code in March, the company has largely moved away from its commitment to building a “full-stack” publishing experience where all user interaction is driven to BuzzFeed.com. That’s simply not how people are consuming content anymore.

“There was this jump to mobile and mobile apps, and now, the majority of content consumption is happening inside mobile apps,” Peretti explained.

The launch of BuzzFeed’s popular video studio, BuzzFeed Motion Pictures, helmed by Ze Frank, really “showed [BuzzFeed] that the full-stack model was reaching its limits,” said Peretti, “because video consumption was happening in a much more distributed way. … Initially we said, ‘Let’s put BuzzFeed video in the CMS and that’s another layer in the stack.’ But that didn’t work that well.

“People were [mostly] going to YouTube to consume lots and lots of video. We could have drawn the conclusion that people weren’t that into video because it wasn’t working as well on our site as a list or a quiz. But we knew people loved video and we started to put the content other places and see tremendous results. And that caused us to rethink our models.”

In other words, even though its video model was not driving much traffic to BuzzFeed.com, Peretti realized that BuzzFeed’s content was thriving on social platforms. And so he adjusted accordingly, and BuzzFeed video now sees over a billion views each month.

Peretti was also wary of simply becoming a content creator for other platforms without a tech tool to understand it, so for the past two years the company has focused on dissecting the science of virality: to discover not just how much a piece gets shared, but how it spreads. This is done through its impressive Pound technology, which the company unveiled in late April.

Take Pound’s analysis of how the notoriously viral #The Dress post spread; you can see the clusters of shares in the graphs below—dark blue for Facebook, light blue for Twitter, and white for other publishers that picked up the story. 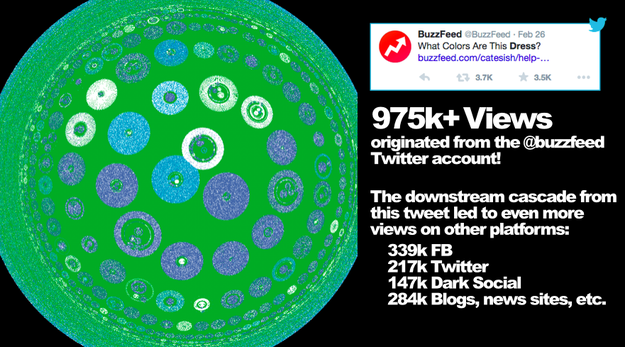 Peretti noted that this technology allowed BuzzFeed to notice powerful insights others might not see, such as the “cascade” effect from Twitter: Even though Facebook garnered more traffic, Twitter’s influence in the media/celebrity sphere helped spark the initial virality.

Essentially, BuzzFeed has crafted itself into a kind of Hollywood studio built for the fragmented, app-crazed media world we live in today, one that can not only create content that people can’t help but share, but also understand the deep science behind virality and use it to maximize the distribution of any piece of content, be it a feature film or a listicle.

And that’s likely why NBCUniversal is so eager to make a $250 million bet on BuzzFeed: It needs a partner to teach it how to create and distribute digital content in the most powerful and efficient way possible. Movie trailers driving box-office receipts will not be a sustainable business model much longer. As younger generations give movie theaters and cable TV the cold shoulder, this digital prowess may be key to media conglomerates’ sustainability in the future.

Peretti says that we are “trending towards” a world where all of BuzzFeed’s content is consumed on other platforms, and $250 million in new funding will allow it to invest even more heavily in creating content that spreads across platforms like crazy, as well as the technology to perfect the science of distributing it. NBCUniversal’s ample resources as a TV and film powerhouse could help BuzzFeed take its video efforts to the next level as well.

The question, of course, is how you make money off of all this. Peretti is quick to point to BuzzFeed’s branded content work, such as its viral “Dear Kitten” collaboration with Purina, as proof that it’s possible. Peretti is betting that if you can charge brands millions to create content that goes viral, and pair that with ad revenue splits from the likes of Facebook, Google, Apple, and Snapchat, you can build a pretty healthy business. Either that, or a giant media conglomerate buys you outright to guide their business into the web 3.0.

Because for modern media companies like BuzzFeed, the two options may well be to get eaten, or embrace your inner Hollywood mogul.