Every year we see brands experiment with new content formats in an attempt to stay fresh in an overcrowded media marketplace, and 2015 is proving to be no different.

In 2014, we covered three content formats—interactive branded stories, branded documentaries, and personalized content—that were about to take off and help brands stand out.

If you take a look at our “Best Branded Content” roundups for the past year, you’ll see many examples of these formats being put to good use. Brands like Nike, Netflix, and Microsoft took full advantage of interactive stories. NVIDIA released a 10-minute documentary debunking lunar landing conspiracies (while showing off the technology behind their latest graphics processors), and Cisco worked with CNN to produce a documentary series on progressive cities. As for personalized stories, “robot writers” took it up a notch with their ability to draft personalized content at the speed of 2,000 simple articles per second.

But those three approaches have now blended into the mainstream to the point of being expected. How, then, are brands going to make their stories stand out this year?

“It’s no question that street art and graffiti in general is illegal,” says the narrator as we see walls lined with colorful graffiti and posters. There’s hip-hop playing in the background. “If caught, it’s usually cops, sirens, and handcuffs.”

It might be easy to mistake this scene for a trailer of an upcoming reality show, but this is actually from the trailer for “Surplus Candy,” an online documentary series about street art sponsored by Squarespace and apparel company The Hundreds.

“Surplus Candy” is a prime example of how brands are taking their video content up a notch by producing multi-episode narratives rather than just one-off videos. For brands with bigger budgets, the production quality can be comparable to network TV shows—something we’ve already seen with Chipotle’s $250,000-per-episode commitment to its satirical series, “Farmed and Dangerous.”

Other standout examples from the past year include Glaceau’s “Seriously Distracted,” Subway’s “Summer With Cimorelli,” and Jordan’s “BGCP3TV in HD” (yes, the tongue-twisting title was intentional).

Despite the time and cost that goes into developing TV series, there’s a good reason why brands are investing in this format: Digital video is on the rise. Just last year, Adobe Digital Index reported there was a 43 percent year-over-year increase in online video starts. And Cisco’s most recent projections show that by 2018, video traffic will make up 79 percent of all consumer Internet traffic. 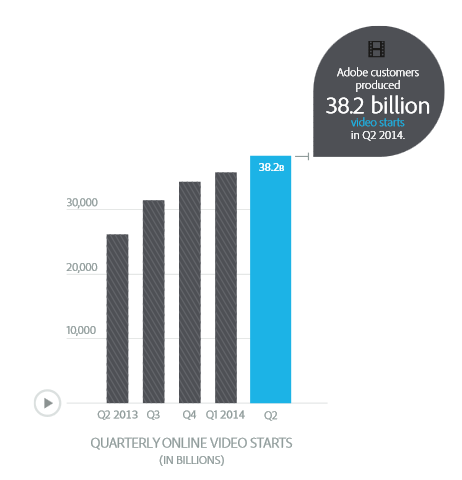 It’s clear brands are aware of this growing demand in online video. After only a few months of 2015, we’re already seeing interesting takes on the format. Snapchat’s “Literally Can’t Even” is a comedy series with ephemeral episodes that takes advantage of the platform’s unique format. There’s also “Luminaries,” an original documentary series from Uproxx, that is sponsored by Hewlett-Packard and meant to promote the company’s Sprout computer. Even talk shows haven’t been forgotten in the realm of branded web shows, as demonstrated by AARP’s “Technology: It’s a Guy Thing,” hosted by tech evangelist Guy Kawasaki.

In other words, if you feel like your brand could benefit from a short web series, now would be a great time to start. The real test will be if branded shows, like branded movies, can earn serious critical and popular appreciation.

Over the years, infographics have gone from the easiest path to “going viral” to earning the nickname “infocrapics.” In a 2012 interview, Google’s Matt Cutts even warned of the potential SEO penalties for infographic misuse: “What concerns me is the types of things that people are doing with them. They get far off topic, or the fact checking is really poor. The infographic may be neat, but if the information it’s based on is simply wrong, then it’s misleading people.”

Despite the Internet’s rocky relationship with infographics, their use as a creative medium is finally starting to mature. Rather than regurgitating web-researched stats for their infographics, more brands are packaging original research on their industries, users, and processes into creative graphics. And by collecting and using their own data, these brands are doing more than just publishing pretty charts: They’re producing content and insights their readers won’t find anywhere else.

It seems we’ll be seeing more of these interactive infographics in the future from brands gathering their own data since, according to a Gartner survey, 73 percent of organizations plan to invest in big data in the next two years.

If most brands push through with these plans, they’ll have the infrastructure to organize and analyze the data they collect more easily. Plus, with the increasing popularity of tools such as Infogram, Tableau Public, and Visual.ly, making interactive data visualizations has never been more accessible and affordable—even for brands on a budget.

It’s time for brands to realize something that our children already knows: Comics are awesome. Last year, the Florida Department of Citrus worked with Marvel to produce comics featuring Captain Citrus, a superhero who reminds kids about the importance of nutrition and, as his name implies, orange juice. The comic was distributed digitally and in print, with one million print copies circulated in schools.

But not all brands work well with The Avengers. Marketers might be concerned about the tone of business-related comics. What if your brand looks unprofessional next to speech bubbles and cartoon animals?

To answer that question, we have to remind ourselves comics are just a medium, much like film, TV, text, or radio. Here’s how comics theorist Scott McCloud explains it in his book Understanding Comics. 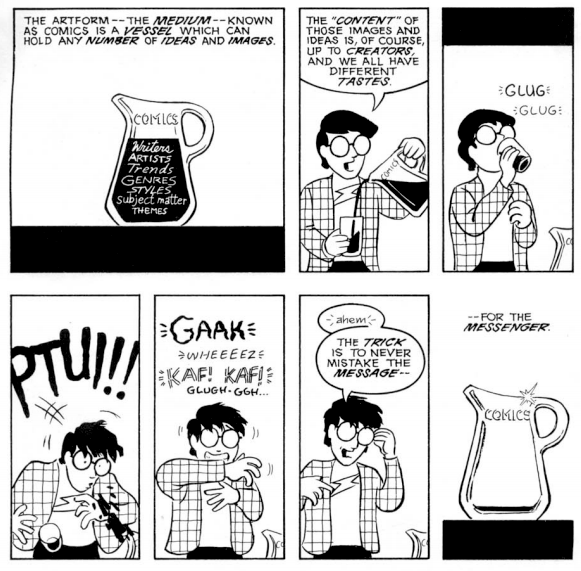 With McCloud’s sentiment in mind, journalists are now turning to comics for even the most serious reporting. The Center for Investigative Reporting uses comics to tell the story of a teen’s solitary confinement in jail, and Symbolia Magazine uses comics to cover everything from science to politics.

While branded comics haven’t had the same amount of genre experimentation, we’ve seen a lot of stellar examples. Cartoonist Hugh MacLeod has produced one-panel comics for Rackspace, HubSpot, and has some upcoming comics for Microsoft. In 2013, Mailchimp published a series of whimsical animated comics (about chimps, of course). Medium’s re:form, a collection sponsored by BMW, includes a comic about the history of flags. 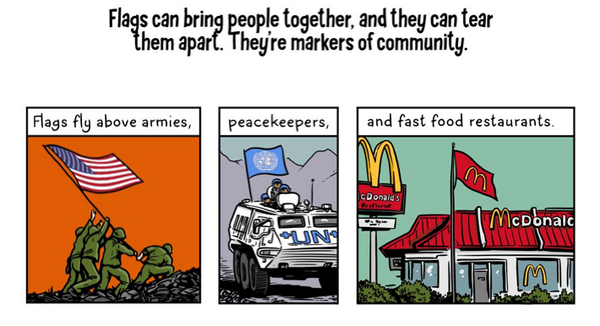 The diversity in these examples demonstrates how almost any brand can use comics in some way. You just have to keep in mind that the medium should suit the story and vice-versa—a factor all marketers should consider regardless of the format.

Use These Formats Wisely

It can be tempting for marketers to just hop on these trends and hope for virality and engagement. But let’s not forget the main reason these formats are gaining popularity: They’re excellent options for presenting a compelling story. Simply adopting the format will not necessarily bring success if the content itself is subpar.

A branded web series that gets it right will have episodes the audience will look forward to seeing week after week, just as they do with their favorite TV shows. The best data-driven interactive infographics will seem more like data journalism, simplifying complex topics for the audience in a way that gives them clear insights. Branded web comics that take full advantage of the medium will be more than just pictures with speech bubbles; they’ll tackle even the most sensitive subjects in just a single panel.

In other words, brands that get why each of these formats work will have a huge advantage over their competitors. Or at least they will until 2016, when there will be a whole new batch of content formats for everyone to play with.