It’s always interesting to see what a famous athlete does when their sports career is over. Carl Lewis attempted to become a singer. Magic Johnson had a failed talk show. Bruce Jenner became Kim Kardashian’s stepdad. After years of obsessive practice and single-minded purpose, what will our heroes do with their newly found free time, piles of expendable cash, and enduring stardom?

Web design company Wix has taken this cultural fascination and used it as the basis for their new Super Bowl campaign. “It’s That Easy” centers around five retired NFL stars—Brett Favre, Terrell Owens, Emmitt Smith, Larry Allen, and Franco Harris—and what businesses they would start in their retirement.

Usually, athletes market something like protein powders or workout DVDs once their jersey is hung up for good. But in Wix’s world, NFL retirees want to be a bit more creative. Terrell Owens, for example, is now baking pies. Franco Harris is an event planner. Brett Favre is a butcher (though I’m sure the staff of Deadspin could have come up with some much funnier suggestions).

While only Owens’ promo has been released so far, it sets the tone for the rest of the spots—cheesy, hilarious, and packed with well-defined muscle. Check out the six-time Pro Bowler getting in some last minute reps before he puts on his oven mitts.

Yet this campaign goes beyond televised advertising. Along with 30-second spots for their fake businesses, each NFL player will also have an online presence.

“There are expanded opportunities to start a narrative that goes beyond the Super Bowl,” said Eric Mason, Wix’s director of marketing, in Adweek. “Digital is a magnifier, not a limiter.”

According to Variety, a website will be going live before the Super Bowl that will even allow people to buy products from the football player’s new startups, like Kickstarter meets Sunday NFL Countdown.

“There’s fewer people watching the Super Bowl commercials traditionally,” Mason said. “There’s so many other channels in which to tell your story.”

Using a combination of both online and televised advertising is a smart move for Wix. People will already be Googling the company since they’re an online business with an ambiguous name—it’s hard to figure out what they do without a little digging. After hitting “search,” potential customers will be both informed and entertained by the content from the “It’s That Easy” campaign.

Currently, a search for the hashtag #ItsThatEasy shows how many business owners are already using Wix to create their own website: This feed will be far more interesting once it’s infiltrated with ridiculous pictures and videos of football players. In fact, Wix has already released some of the photos—be sure to check out Larry Allen lifting a car. 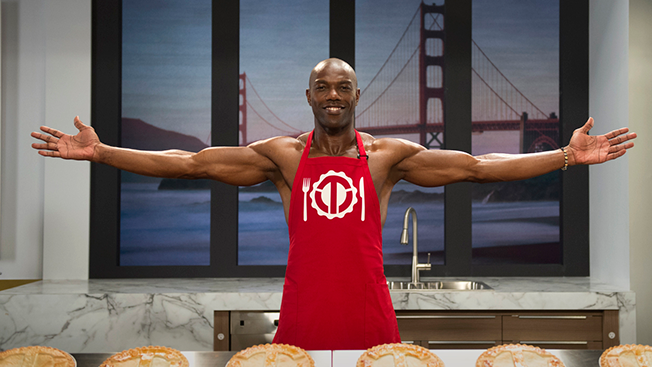 Even though I could stare at this all day—hello arms—I can’t wait to see how the rest of this campaign plays out on the Super Bowl mega-stage. What might even be more interesting to see is how the online content component performs alongside it.