Comedy duo Tim and Eric are famous for making completely bizarre, borderline uncomfortable videos. One of their channel’s recent uploads is a ten-minute clip of the two comedians staring blankly at the camera. Yep. That’s it. And it has over 200,000 views.

With such a strange sense of humor, you’d think that major companies would steer clear of Tim and Eric to represent their products. Yet within the past year, both GE and Old Spice have hired the comedians to create videos for them. Totino’s Pizza Rolls is now following suit and creating an entire campaign around Tim and Eric’s outlandish aesthetic.

Totino’s challenged Tim and Eric to use pizza rolls in as many ways as possible. What the two did with the prompt is trippy, to say the least. The screenshot below—sorry for the nightmares—is enough to give you the essence of the ad, but it’s worth watching the whole thing. It’s psychedelic and weird. It makes you squirm. And for some reason, you’ll want to share it with all of your friends—at least if you’re a college student like me.

A lot of brands would have run away from something like this as fast as they could, but the risk that Totino’s took in commissioning such an off-the-walls video is already paying off. The company’s partnership with Tim and Eric has already been covered by the A.V. Club and Adweek. BuzzFeed even made a listicle about the most awesome parts of the commercial—that’s when you know Totino’s has the millennial market covered. Soon feminine pizza bags, pizza chess boards, and pizza Valentines will be flying off the shelves.

Totino’s didn’t stop the weird train at their TV spots. Instead, they went on to create a whole website that expands the wonderfully confusing world of the Totino Boy.

Totino’s Living page is an homage to everything that a hungry, bored college kid could ever want. Truth be told, articles like “TV Headband of the Future” seem to be a less than subtle nod to the legalization of a certain green substance.

The site even includes ClickHole-style articles like “16 Signs You ARE a Pizza!” and mock pizza-inspired banner ads:

Totino’s is throwing the idea of a traditional website out the window. They’d rather create a world that is all about “hot snacks and cool times” and has a dress code of “PJs and that one t-shirt you got at camp.”

Clearly, the snack company understands that their product isn’t viewed as high class. They are fully aware that pizza rolls don’t have the cache of a kale salad with lemon juice. Totino’s isn’t trying to alter its brand image by offering gluten-free or low-fat pizza rolls. Instead, they’re posting pictures of cats with pizza faces. 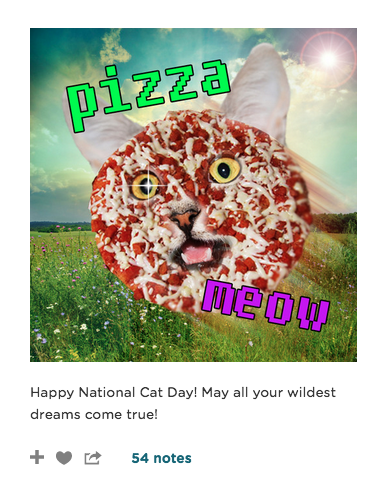 As Hard Rock Joe says in the Tim and Eric video: “You can keep your corporate B.S. I’m into punk pizza rolls!”