John Lennon may have said the Beatles were more popular than Jesus… But what about IKEA? The Swedish “Life Improvement Store” prints over 200 million copies of its catalog each year—double the amount of Bibles printed in the same time frame.

While IKEA’s print offering is its most enduring piece of content marketing, it only scratches the surface of the brand’s exemplary content marketing efforts, which are many and varied and all revolve around one common mission: to improve people’s everyday lives.

“We really look at how people live their lives at home,” says Christine Scoma Whitehawk, communications manager for IKEA U.S. “So, we really start with the customer, and try to see what’s important to them… And then how can IKEA help them so that we are truly partners in making their life better at home every day.”

They don’t just glean this consumer information from surveys and reports. IKEA actually sends design experts into people’s homes to listen to their concerns and provide feedback. This allows IKEA evangelists to make marketing decisions based on people’s real-life experiences rather than just surveys or data. And what’s the most effective way to share that information? Through the power of storytelling.

“Over the last several years, content marketing has become more important for us in that mix,” added Whitehawk, “because it gives us the opportunities to start telling some of our IKEA stories so we can really share with people how IKEA can improve their lives.”

Here’s how they’re doing it.

IKEA is no stranger to brand publishing, having launched its catalog in 1951—eight years after the company was founded in 1943. And it’s not your normal product catalog, having started as a local, Swedish offering and expanding into a giant, 300-plus-page book that’s printed in 38 editions and 17 languages and is distributed across 28 countries. 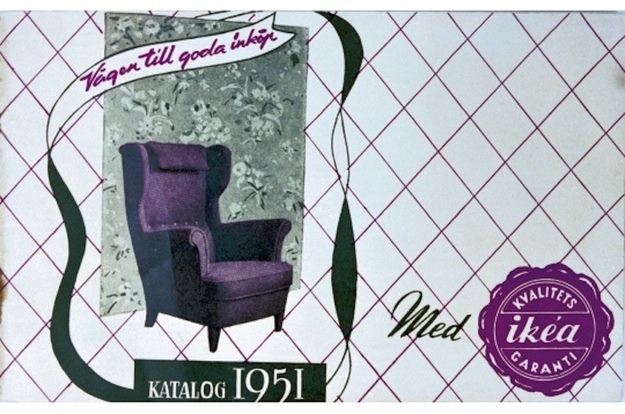 IKEA is so confident about its print publication that they held it up to the glitz and glam of Apple’s iPhone 6 announcement with this brilliant “bookbook” parody. “It’s not a digital book or an e-book,” says Jörgen Eghammer, IKEA’s “Chief Design Güru.” “It’s a bookbook.” You can actually feel the pages move as you swipe!

Though the viral video was published by the IKEA Singapore YouTube channel, it succeeded in representing IKEA’s global brand through a form of humor that’s universally relatable—making fun of Apple. And while the company may have earned over 12 million YouTube views for poking fun at the digital elite, the marketing brains behind IKEA have also embraced innovative technology. The 2015 catalog offers an interactive, online version and an accompanying app with an augmented reality feature, called “Place in Your Room,” that allows users to virtually try out IKEA furniture in the comfort of their own homes.

But as you’ll see, IKEA’s content marketing efforts go far beyond its catalog.

The branded web series is all the rage today, but IKEA was far ahead of the game in 2008 with “Easy To Assemble,” which ran for four seasons (plus a spin-off musical venture) and won two Streamy Awards and Webby Awards each.

The series follows a fictional version of creator and star Illeana Douglas as she leaves her Hollywood acting career to work at IKEA. In a bizarre twist of events, Douglas finds herself unable to escape the pressures of showbiz, with Justine Bateman filming a talk show in the middle of the IKEA showroom, and Jeff Goldblum, Jane Lynch, and more popping onto the scene. To get the full brand experience, the episodes were also filmed in actual IKEA stores—most notably the Burbank, Calif., IKEA.

Douglas brought the idea to brands when she was looking for a sponsor for her web series. And she struck gold when IKEA signed on.

“When I wrote the script—this was the kicker—they only had one note: ‘We don’t sell ice cream; it’s frozen yogurt.’ And I had my pen out, and was like, ‘Okay, what else?’ They said, ‘That’s it.’ That was just so shocking for me, as a writer,” Douglas says, “to have that be the only note. So of course I fell in love with them. It was the fact that they trusted me with my art, and the fact that they knew I wasn’t going to do anything badly against their brand, because I actually truly did love their brand.”

Douglas benefitted from having a supporter and sponsor in IKEA, and IKEA benefitted from Douglas’s talent as a creator. This relationship still seems to be extremely rare in the world of content marketing, but when it is formed, it often proves fruitful, as we’ve seen with other branded entertainment series such as Chipotle’s “Farmed and Dangerous,” which was produced by Piro—a small production company that had a similarly positive experience.

“We had a Twitter account. We also started our own ‘Easy to Assemble’ app,” Douglas says. “We also were the first web series to release a soundtrack album. We were doing a lot of crazy stuff, and at the bottom of all of it, was always IKEA.”

How could you make the first hour of your day better? IKEA conducted a phone survey of 1,000 adults in the U.S. and found that 72 percent of respondents said that a stressful morning affected the rest of their day. Seventy-five percent also said that they do not have a regular weekday morning routine.

To help consumers remedy these issues, IKEA launched the “First :59” campaign, with a website featuring tips for getting your day off to a good start. “Our perspective on this is if you start your day off right, it’s going to lead to a great day and great interactions for the rest of your day,” Whitehawk says.

With a particular focus on how to improve organization, utility, and comfort in the bedroom and bathroom, the website is structured around chunks of knowledge from four lifestyle and design experts and bloggers, including everything from getting the kids ready on time to finding your wallet and phone.

While IKEA loves its experts, the brand also encourages average consumers to flex their own design and creativity muscles.

IKEA created Share Space in 2011, a community photo-sharing site that’s become a hub for the brand’s user-generated content. The microsite invites users to share ideas that inspire them and learn from others as they browse, comment on, and save other people’s layouts. Whitehawk says the project is aimed towards “really having customers who have experienced the brand share how they’ve used IKEA in their home.” By allowing consumers to provide inspiration for each other, the project perpetuates IKEA’s goal of making people’s lives at home better. 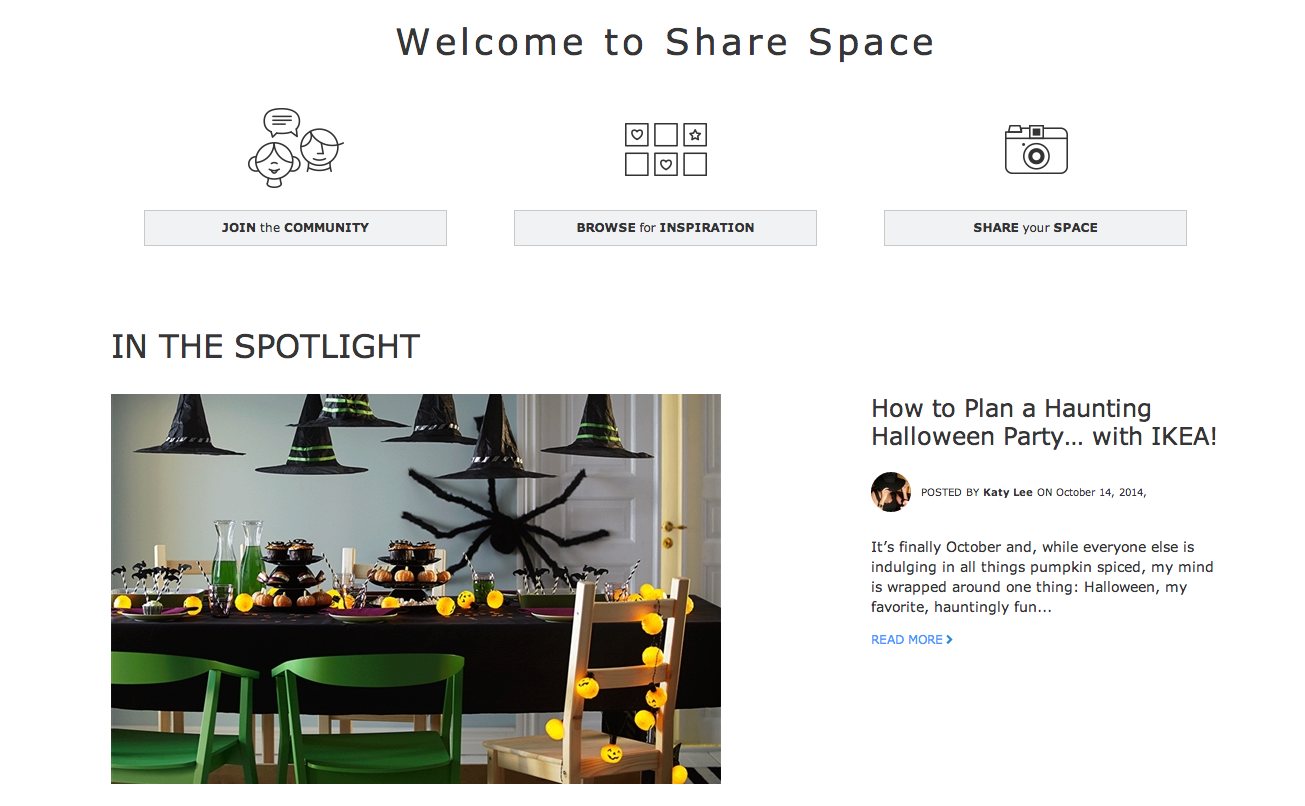 Share Space was launched in tandem with Design by IKEA, the first blog to come from IKEA U.S. Here, expert bloggers are at the forefront once again, dishing advice, analyzing trends, sharing recipes like a jam that will knock your warm, woolen socks off; organizational tips; and more.

Along with expert bloggers and enthusiastic consumers, IKEA also offers opportunities for talented employees stationed throughout the world to create content.

IKEA recruited five furnishing and design experts from their own pool of employees to comprise the “Home Tour Squad” and travel to different cities throughout America. The Squad members left their regular jobs at IKEA stores around the country for one year to help IKEA consumers furnish and design rooms in their homes, all while documenting their journeys along the way.

“They’re producing, filming, editing and posting,” says Whitehawk. “We’re also the publisher, so rather than going through another channel, it’s published on YouTube and supported through owned social media.”

The IKEA Home Tour Makeover videos exist in a playlist on the IKEA USA YouTube channel, and are shared on the @IKEAUSA Twitter and Instagram accounts.

“How To Build” assembly videos

There’s a funny scene from a 2012 rom-com, Celeste & Jesse Forever, in which Rashida Jones’ character asks Andy Samberg’s character to come over and help build her a dresser. They get so drunk and fed up with trying to follow the instructions that they just end up throwing pieces together into something that looks like a robot.

For people who have that kind of relationship with IKEA furniture instructions, IKEA U.S. offers visual aids with its How To Build assembly videos.

“We looked at that as an opportunity to provide a service to our customers in the U.S., to create that series of assembly videos to really help them if they did have questions or needed the step-by-step instructions acted out,” Whitehawk says.

“It’s actually something that we shared globally, because there is that same appreciation for seeing the instructions come to life in many other countries,” she adds. “We purposely created them without voiceover and with superimposed text so that other countries could take them and add their own language if they wanted to.”

In the social media world, IKEA is also taking over Pinterest with its Smörgås Pinners board, run by IKEA Communications’ copywriters.

“We have a team of communication coworkers internally who have expressed interest in Pinterest,” Whitehawk says. While most of these contributors sit in IKEA’s marketing department, IKEA U.S. also wanted to tap into the talent that exists in its 40 stores across the nation.

“At certain times throughout the year we kind of put out an open casting call for folks that would like to participate in that,” Whitehawk adds. “Everyone that works for IKEA has a passion for the home and home furnishing, so whether or not they have an interest in getting involved and using this as an outlet to express their passion is up to them.”

The charm of the Smörgås Pinners Pinterest page seems to be largely rooted in nostalgia, featuring boards that dig deep into the old history, catalogs, and room sets offered by the Swedish design company. 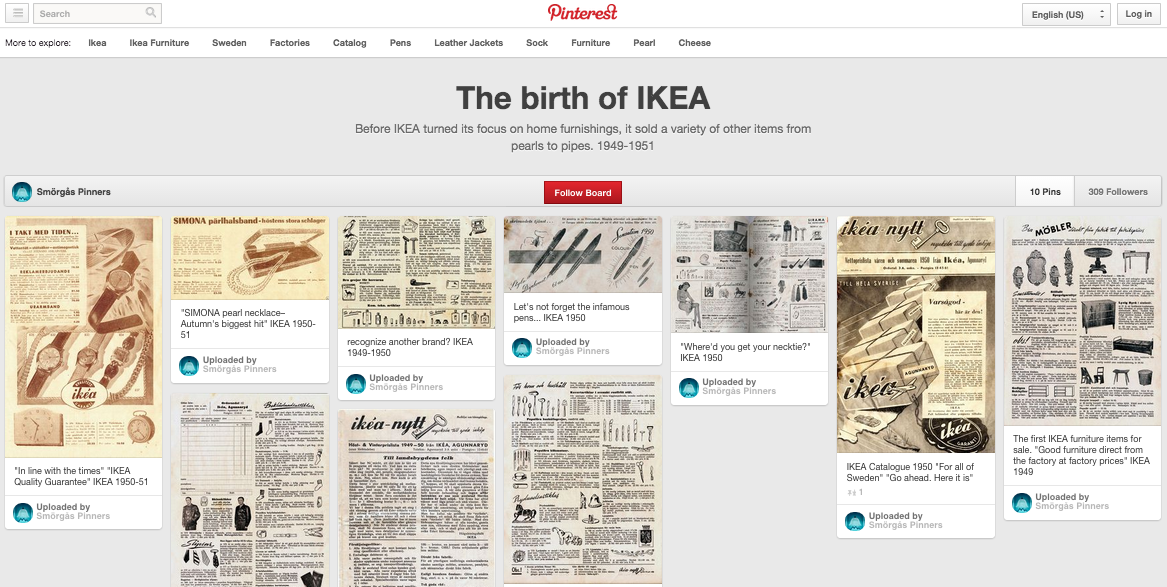 IKEA isn’t just for decorating college dorms and furnishing your first apartment. To drive home the message that IKEA can really improve life at home for everyone, the brand isn’t just pushing their products; they’re offering information about how to best use them, inspirational stories from happy customers, and entertaining content that lights an overall positive glow around that yellow and blue logo.

Content marketers can learn from IKEA’s hands-on, multimedia approach by making an effort to understand their audience’s wants and needs, and developing their own ways of putting a face to the faceless consumer. Also, putting Keanu Reeves in a blonde wig to play a Swedish record producer is just a much more exciting content strategy than, “Hey, here’s a cool chair.”