Apple fever took over the Internet today with the announcement of three exciting new products: the iPhone 6, iPhone 6 Plus, and the Apple Watch. But while everyone was tweeting about Apple’s latest efforts to lead the tech gospel, they were missing the most major industry announcement of September: the launch of IKEA’s new bookbook.

IKEA Singapore‘s video—which has already accrued over 9 million views in less than a week—is a brilliant ad for the new 2015 IKEA catalogue, wrapped in a hilarious Apple parody.

The campaign also comes with an interactive product site where users can explore the catalogue’s many unique features, including tons of glossy, pre-loaded content, the original touch interface that lets you actually “feel” the pages move as you swipe, and instant page-loads with no lag! 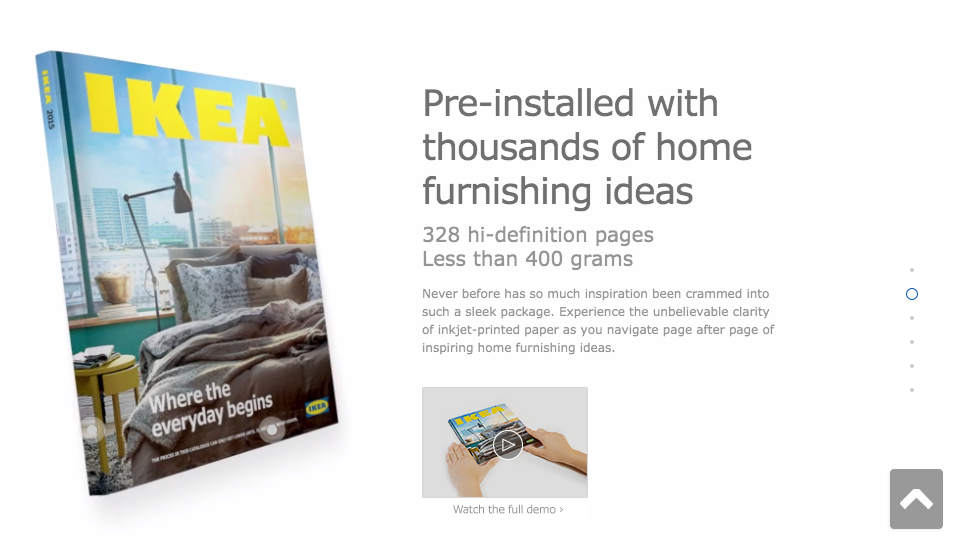 As the video advises, download the bookbook from your mailbox or upload yourself to an IKEA store and find one there. And for those haunted and confused by the idea of acquiring something that can give them a paper cut, IKEA offers an online version of the bookbook as well.

While many have tried—and succeeded—at parodying Apple’s product videos, IKEA’s bookbook might be the most spot-on mockery yet. And it’s not going anywhere, seeing as the paper product’s battery life is eternal.