Yesterday, Green Day trended on Facebook as the members of the network attempted to rouse the band in honor of their hit song, “Wake Me Up When September Ends.” It was one of those quirky, weird social media moments, and it made me think: If the marketing world had an anthem, it would probably be “Wake Me Up When August Ends.”

Why in hell would I think of something so weird? Well, after some slim pickings during July and August for our monthly best branded content roundups, September was a treasure trove. I’m surprised AdFreak didn’t explode.

(Special thanks to Kieran Dahl, Dillon Baker, and Alyssa Hertig for helping me sort through the insane amount of branded content produced this month.)

We’ve written about how brands in boring industries can make incredible content before, but GE’s new two-minute fake infomercial starring Jeff Goldblum blows all of those posers out of the water. GE hired legendary comedy duo Tim & Eric to produce this masterpiece, which features Goldblum in ’70s loungewear shilling for the Link lightbulb (and Wink app!) in tremendous fashion. The Jurassic Park actor offers the perfect multi-demo reach, appealing to older generations and millennials alike. In just four days, the video has over a million views. Props to BBDO New York, also the agency behind GE’s hit videos “Childlike Imagination,” “Ideas Are Scary,” and “The Boy Who Beeps.”

But this one might top them all. Come for the lightbulbs, stay for Jeff Goldblum in a hot tub playing a grand piano.

Sneakerheads, delight… and cancel your Saturday plans. Nike U.K.’s new “Genealogy of Innovation” microsite is going to take up at least six hours of your life. The site allows you to travel along interactive timelines, exploring various aspects of Nike innovation from 1971 to the present day. The site might befuddle those who don’t worship sneakers and cleats, but for Nike’s devoted fans with a closet full of kicks, it’s Christmas morning. 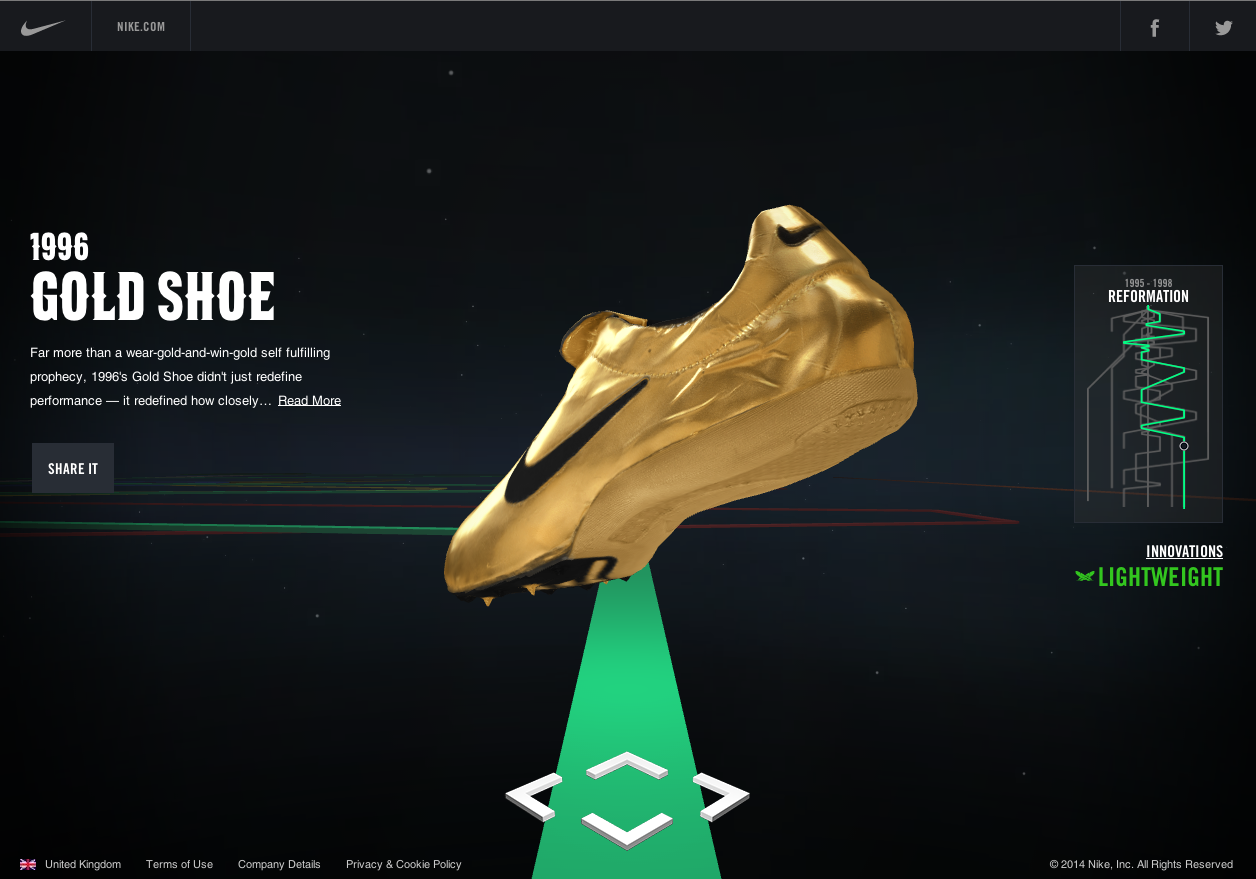 The trailer video for the site is entrancing as well—and happens to look like something GE would make.

The Big Lebowski was pretty much the greatest commercial for Kahlua ever made, as Jeff Bridges’ iconic character, “The Dude,” saunters through the film sipping on White Russians and just being generally awesome.

Now, 16 years later, Bridges has finally starred in an actual commercial for Kahlua, except he’s not playing the dude, and it’s not really a commercial. Instead, it’s a bonkers four-minute film noir.

In the film, a present-day Bridges—sipping a White Russian in a smoky jazz club—narrates the tale of his younger self finding a valuable briefcase in the Mexican desert before being saved from the bad guys by an astronaut that falls from the sky. It’s an incredibly weird piece of content, but Bridges’ narration is entrancing, and in the end, it fits the Kahlua tagline: “Mixing things up since 1936.” I’m writing this at 11 a.m., and after watching this video three times, I can’t deny that I’m craving a White Russian. (Insert alcoholic writer joke here.)

4. IKEA: “Experience the Power of Bookbook”

In the wake of #BendGate, everyone and your mama’s ad agency have been parodying Apple. But IKEA was there first on September 3 when they released a trailer for their 2015 IKEA catalog that perfectly mocked an Apple product launch.

“It’s not a digital book or an e-book,” says Jörgen Eghammer, IKEA’s “Chief Design Güru,” as he unveils the catalog. “It’s a bookbook.”

Though the video champions the bookbook’s instantaneous load time and “touch and drag” functionality, it also comes with a complimentary interactive product site.

Yesterday on The Content Strategist, Michael Grimes used The Unicorns as a metaphor to show how “as content marketers creating work on behalf of brands, we shouldn’t feel the need to make things with the giant arena in mind. Chasing the most universally appealing or widest-reaching subjects only guarantees that you’re missing a bunch of smaller, but more purposeful, opportunities.”

Red Bull’s latest documentary series, “Diggin’ in the Carts,” is a prime example of that philosophy at work. The series examines the world of Japenese video game music, going behind the scenes to tell the stories of the composers who pioneered some of the most beloved video game soundtracks of our time, from Tetris to Super Mario Bros.

And honestly, with the video game industry now bigger than the movie industry, this piece of content may not be so niche after all.

I covered this bad boy last week, so instead of writing the same thing in different words, I’m just going to plagiarize my own post…

If you’ve ever left your cell phone or wallet on a plane, there’s a good chance you know what it’s like to get in touch with your inner Nic Cage:

But if you’re a passenger of Dutch airline KLM and you land in Amsterdam, that might not be the case. Instead, you might have gotten a surprise visit from Sherlock, KLM’s incredible (and adorable) lost-and-found delivery dog who sniffs out your self-loathing to deliver whatever you lost:

Sherlock is aided by his human coworkers, who use social media activity to track passengers who have lost their prized possessions. KLM claims 80 percent of the items lost in Amsterdam’s Schiphol Airport are returned to the rightful owner.

After generating over 10.25 million views in only nine days, KLM is proving puppy power is still going strong on the interwebs. Scrappy Doo would be proud.

Vs. magazine‘s new ad serves as a reminder media companies can do commercials, too, and there’s a good chance they’ll do it better than everyone else.

The commercial is actually a poignant two-and-a-half-minute short film that contemplates the nature of fame. As Kirsten Dunst waits for an Uber, two fans pull up and rush out of their cars, repeating a mantra of ohmygawd, immediately accosting Dunst in the pursuit of selfies. Dunst endures the intrusion, visibly uncomfortable, and when they finish, she asks the girls if they want to ask her any questions.

“That was going to be my question too,” the other echoes.

Dunst’s subtle facial expressions and the film’s awkward pauses make for a potent combination. And the two girls ride off excited, not because they met Dunst, but because the pictures will give them fleeting social fame.

“‘Aspirational’ is when you reach out toward something not attainable quite yet but that could be maybe in the near future,” director Matthew Frost told AllDayEveryDay. “It’s not really related to the actual film necessarily, but you could say that the two girls are aspiring to be the most popular they can be through social media. It’s more about what they can take from her that interests them the most: her celebrity and documenting themselves next to it gets them closer to their goal.” (H/t Adweek.)

9. Starbucks: “Meet Me at Starbucks”

I’m grouping Skype and Starbucks together because they’ve both done an amazing job telling touching stories about people, with their products quietly serving as the conduit that makes the story possible. In Skype’s case, it’s their video conferencing technology bringing people together. In Starbuck’s case, it’s their stores.

Skype has been at this for a long time; you might recall their touching video, “Born Friends,” about two girls, each born with one arm a world apart, who grew up together via Skype. Their latest creation is a collaboration with JacksGap, a British travel storytelling project, to create three documentaries about three extraordinary women. Smartly, Skype handed over creative control to JacksGap, and the result is the start of what promises to be a very authentic series:

Similarly, Starbucks first global campaign is… well, ambitiously global. Taking a page from Skype’s efforts, Starbucks created a mini-documentary about customers in 59 different Starbucks in 28 countries over the course of a continuous 24-hour period.

As Ad Age reports, it was a very challenging undertaking:

“For the global campaign, called ‘Meet me at Starbucks,’ the coffee giant isn’t focusing on products like it normally does in its ads. Rather, it’s focusing on the brand by chronicling a day in the life of Starbucks through a mini-documentary, shot in 59 different stores in 28 countries, using 39 local filmmakers, 10 local photographers and one director coordinating it all at 72andSunny, the agency responsible for the work. Each part of the ambitious project was shot in the same 24-hour period, producing 220 hours of footage, and features various subjects—from a hearing-impaired group meeting, to a group of women discussing scrapbooking, to elderly couples to teenage friends—going about their business at Starbucks.”

It’s a great debut storytelling effort by the coffee giant, which is taking a smart approach by embracing its ubiquity. The only strange part is the full interactive version remains unlisted on YouTube: 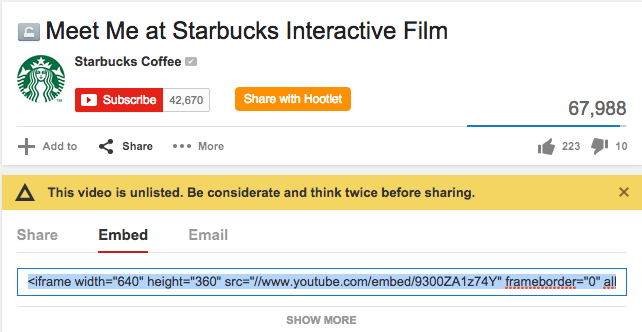 There’s no other way I could possibly end this piece than with Lil B’s emoji app, “Basedmoji,” which is just an amazing piece of self-marketing. I mean, just look at these things: 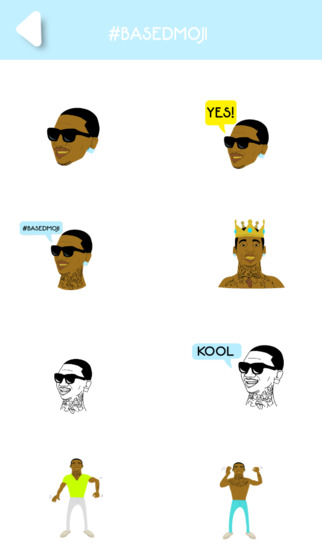 Even better is the app’s description:

“This Is A Very Rare App Designed And Developed By Lil B himself!!! COLLECT THIS APP AND SPREAD AROUND THE WORLD! This app was created by Lil B to have fun with your friends and family and celebrate the life of Lil B! I LOVE YOU! – Lil B”

Along with Drake Shake, this is going straight in the hall of fame of rapper app-marketing.

I wrote about Adobe’s “Mean Streets” commercial yesterday; it might be the best parody of modern marketing I’ve ever seen. Click junkie needs to become a new derogatory term in the content world.

Think there’s something I missed? Want me to notify me about a piece of content you think should make October’s roundup? Find me @joelazauskas or lazer@contently.com.