5 Brands That Rock Their Munchie Marketing

In an ideal world, we would not judge a snack by its fat, sugar, and sodium content, but by the quality of its content marketing.

So whether or not your slow food, organic, fair trade, gluten-free veganism can accommodate these quirky brands into your diet, try to relish the raucous joy they’re making on social media.

I’m starting with Velveeta because if Aziz Ansari follows them on Twitter, their campaign must have some comic merit.

Their marketing team seems to be comprised of (or at least targeting) college stoners with a taste for photo editing that’s even cheezier than their snacks.

Velveeta’s feed for the handle @EatLiquidGold is currently filled with all sorts of goodies, from absurdly bad Photoshopped images of an NBA player slam-dunking Velveeta into a microwave, to a stock photo of a silver fox and his “mini-me” going foraging for mushrooms on Father’s Day with a skillet full of Velveeta.

The #1 pick for dinner will be announced by this microwave buzzer in three and a half minutes. pic.twitter.com/ouqLHPmXQG

Sometimes, your wife takes you mushroom picking on #FathersDay and you find out you’re a dad. http://t.co/mACn1V4CGq pic.twitter.com/DVgkQHeytE

Latching onto the patriotic angle, the Twitter account posted onomatopoeic firework tweets on July 4, for all who decided that following America’s favorite “Pasteurized Recipe Cheese Product” was the best way to celebrate the birth of our nation. 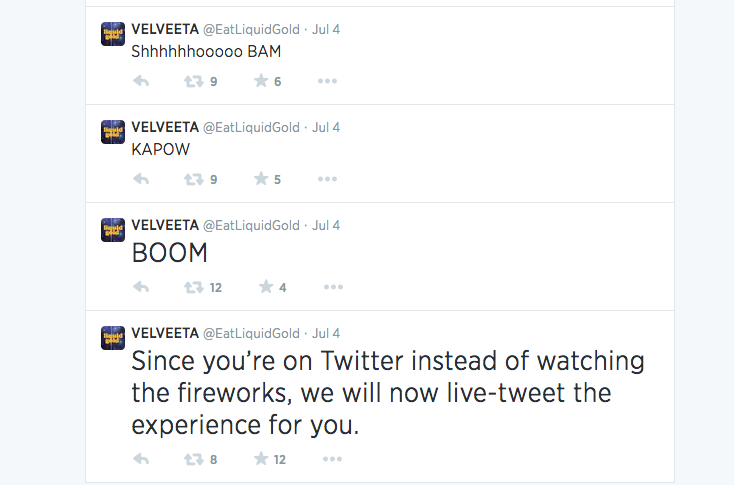 And don’t forget their “What My Skillet Is For” campaign for which Velveeta bought over a thousand used skillets off Internet auctions, only to return them to their owners with a case of the cheeze. With all of this marketing malarkey, we’re bound to forgive them for their recent recall of 260 cases of Velveeta (which contained insufficient levels of preservatives) from Walmarts in the Midwest.

What do frozen pizzas and Harry Potter have in common? DiGiorno sought to answer that seemingly impossible question with their infamous tweets for ABC Family’s Harry Potter Marathon last weekend. Highlights include:

DiGiorno’s tweets are fantastic because they resonate with the human condition without compromising their cheesy candor. Can’t we all relate to an awkward breakup and one of America’s favorite foods?

when you realize you’re dating a pizza and you get real hungry #awkwardbreakup — DiGiorno Pizza (@DiGiornoPizza) July 16, 2014 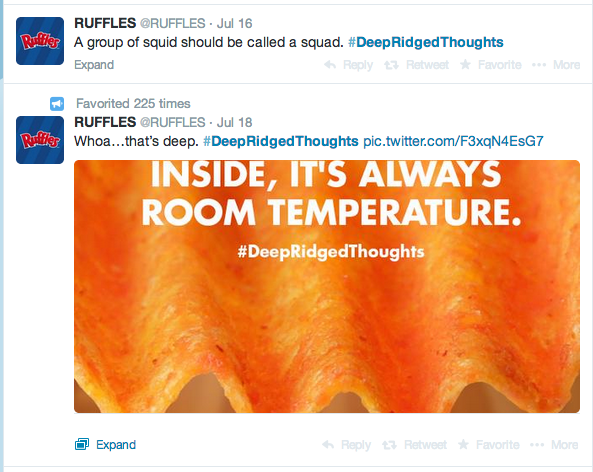 Life was rough when your mobile phone only had one game. #RoughLife #TBT — RUFFLES (@RUFFLES) July 10, 2014

The Tex-Mex chain has come a long way since their chihuahua days. When they launched their new breakfast menu this season, Taco Bell proposed an absurd situation: a customer buying a breakfast burrito from a burger place. How ludicrous! Inviting their audience in on the fun, Taco Bell asked tweeters to submit their own crazy setups with the hashtag #ThatsLike. Taco Bell then then illustrated select responses in GIF form.

Getting a breakfast burrito from a burger place? Ridiculous. #ThatsLike…tweet us your #ThatsLike & we might GIF it. http://t.co/ndJJV1g66n — Taco Bell (@TacoBell) July 24, 2014

Here’s what they cooked up for one user’s suggestion:

And in case you thought all Taco Bell cared about was feeding Gordita Supremes and Cheesy Fiesta Potatoes to wasted, frugal college kids, think again. The Taco Bell Foundation for Teens just tweeted this week that they’ll give any student a free taco if they say they’re going to graduate. School principals should be prepared to hand out diplomas along with packets of Border Sauce in Mild, Hot, and Fire. Stay gassy, Class of ’15!

Still, who needs the pomp and circumstance of free graduation tacos to create brand loyalty if you’ve already received the endorsement of drunk Charlie Sheen?

We’ll end here with something sweet. Have you noticed that Skittles is killing it on Twitter? Who’s the witty weirdo posting every five minutes on their behalf?

Skittles are like if you walked out your front door and an armadillo was there who said, “This way to the Skittles party, if you please.” — Skittles (@Skittles) July 26, 2014

I’d say a good half of their feed isn’t related to the candy at all. Their branding strategy is a bit like Skittles itself: It unleashes the colorful novelty of randomness.

But seriously—this is a social media manager with serious free reign.

If you’re very, very quiet, you can hear the land-squids calling to each other in the glen. — Skittles (@Skittles) July 23, 2014

These campaigns aren’t necessarily “highbrow,” but hey, neither is sitting on your couch at 3 a.m. and watching reruns of Gilligan’s Island while shoving handfuls of sour cream and onion Ruffles into your mouth.