The New Hollywood: Why Brands Are Making Movies

Seeing a movie produced by a brand used to be rare. Dealing with the high production costs of Hollywood—and the domination of the 30-second TV spot—made branded films more of an experimental venture for the select few that could afford it. In 2015, however, the brand film floodgates finally opened.

These examples aren’t glorified TV spots, either; they’re full-fledged short films. With each new release, marketers are raising the bar for branded entertainment—and if we’re being honest, some of them put Hollywood’s non-branded offerings to shame.

Brands as a new kind of studio

Since 1836, when French newspaper La Presse sold the first print ad, advertising has largely been about renting attention. Placing ads in an existing media space gives companies the ability to target and reach an audience in the context of a newspaper, magazine, or TV show consumers love.

As ads have increasingly saturated those mediums, however, consumers have tuned out the noise. That’s why David Beebe, Marriott’s vice president of global creative and content marketing, advised brands to “stop interrupting what people are interested in, and become what they’re interested in.”

For consumers, video has only proven more tempting in the digital age. In 2015, Americans spent more time each day with digital video than they did social media, and studies have shown that 80 percent of millennials reference videos when they’re making purchasing decisions. Rather than focusing on short, agency spots to run on rented TV air time, many brands are opting for a different approach: creating in-house media teams to produce high-quality short films. Most importantly, they’re releasing those films on their own digital channels.

Since launching its content studio—which encompasses content development, creative, and real-time marketing—in September 2014, Marriott has been working to transform itself into a media company through films like Two Bellmen, which has a sequel set to premiere in Los Angeles on February 4. Their filmography also includes French Kiss, which debuted in May, and the upcoming Business Unusual.

Marriott isn’t alone in favoring owned content over a borrowed audience. Jaguar, Samsung, Airbnb, and a number of other companies have shown an affinity for brand films, which they release on YouTube and other video channels. The hope is that viewers—with the help of the right distribution plan—will voluntarily watch something creative made by the brand rather than shrug off awkward product placements or interruptive ads while waiting for their show to return.

“A lot of brands are taking pitches from production companies—’Here’s my show, make travel the backbone of it,'” Beebe said, referencing the traditional advertising model. “Our strategy is completely opposite. We don’t integrate into existing creative. With every project we determine the right story, brand, and partner.”

“The story is ours to tell,” added Billie Goldman, co-marketing director at Intel, which has been producing the Emmy-winning Intel Films series since 2011. “In product placement, I don’t get to own the journey and be woven throughout the story. When I own the content, I own all of that.”

Projects like Intel’s The Beauty Inside series are about more than just owning the content. Intel partnered with Toshiba because both were struggling to connect with a millennial audience. Considering that people aged 14 to 25 spend more time watching TV on their digital devices than a traditional TV monitor, many brands are using brand films as a way to get ahead of the curve.

“It’s an interesting crowd in that they really pick and choose, you can’t push anything with them,” Goldman said. “Entertainment made the most sense.”

Intel tasked agency Pereira & O’Dell with creating “an unexpected experience that exceeds expectations,” and spoke to consumers aged 18 to 35. After the success of three films—Inside, The Beauty Inside, and The Power Inside, all of which incorporated social media and promoted viewer participation—Goldman claims that, based on brand studies, the campaign helped lower the average age of the Toshiba customer from 62 to 45.

Brand exposure, sales, or both?

When someone proposes the idea of a brand film, the financial investment holds most companies back. Films might do wonders for brand exposure—Two Bellman and French Kiss each have more than 5 million views, while What Lives Inside has generated more than 6 million engagements—but do they have what it takes to actually move product?

To gauge the influence of its films on consumers, Intel conducted brand studies and measured engagement using metrics like comments, votes, and shares. The company reported an 8 to 12 percent increase in both brand awareness and purchase intent across all four films, though connecting sales to video is often a challenging task.

“It’s tough to do an upper funnel campaign that moves from awareness all the way to purchasing, “Goldman said. “Can you watch the movie and be expected to buy a PC because of it? It’s a hard thing to tie together.”

In the case of Marriott, the company creates sales packages for its films to encourage viewers to book rooms in its hotels. In essence, the films become a direct path to purchase. For French Kiss, Marriott created a package that offered deals on rooms in its Paris properties. The French Kiss Film Package was promoted on the film’s microsite and generated $500,0000 in room sales in just 60 days, according to the company. 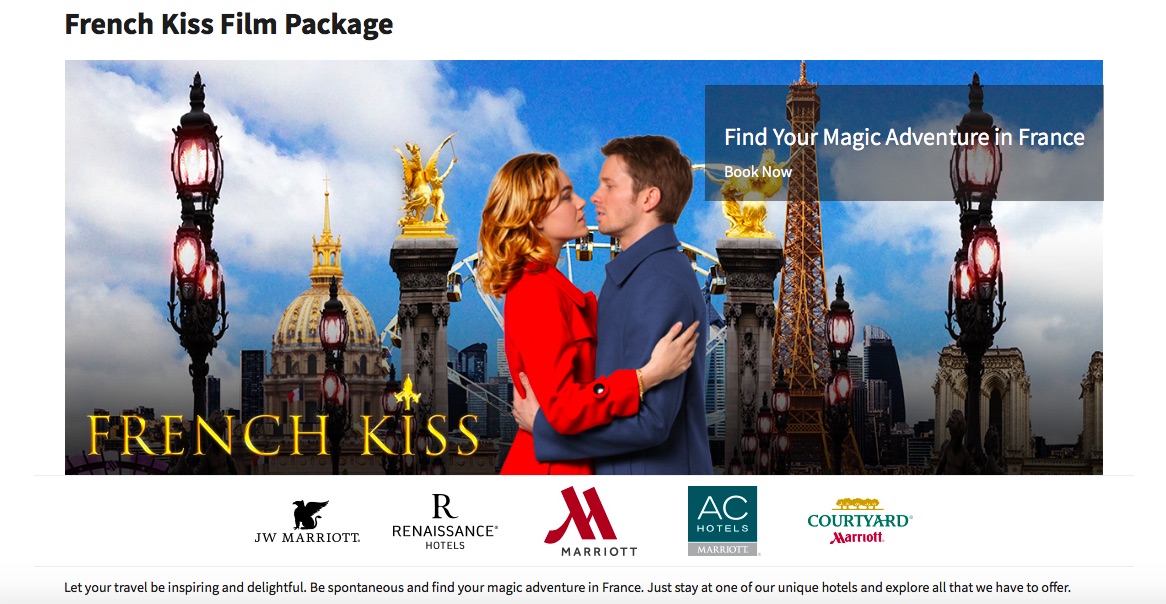 For Marriott, distributing film comes down to experimentation. While Marriott’s primary platform is YouTube, it also distributes movies through the company website and in-room programming. The films are translated into 10 languages and shared with colleagues on other continents, who upload them to local video platforms.

Business Unusual, Marriott’s newest film, will premiere on Virgin Airlines flights (Virgin is a Marriott partner). Marriott is also exploring international content deals, along with distribution through digital platforms like Netflix and Yahoo, which it hopes will help the films break through the noise and the clutter of digital video.

“We look at all partners to see what they bring to the table,” Beebe said.

Intel has used a different distribution tactic for each of its titles, employing microsites for some and integrating with Facebook for others. Most recently, it partnered with Hulu for What Lives Inside. All films get subtitled for use in international markets, and since it owns the film rights, Intel has also been in talks with Netflix and Amazon.

With all of these options, and nothing nearly as simple as renting TV air time, distributing video the right way is arguably as important as the film’s plot.

“Distribution almost stopped us from doing a fourth one. The cost of what it took to make the first film go viral is ten times higher now than it was four years ago,” Goldman said, referencing changes to social media algorithms. “Having the right distribution partner is pretty key.”

In addition to entertaining audiences, branded films are helping to change perceptions of what advertising can be.

“I have seen that evolution. People become more accepting with every film,” Goldman said. “It’s a fine line we walk with what consumers are willing to accept. We aren’t creating a product video—we’re really creating entertainment.”

To some extent, this shift in the consumer mindset is natural. After all, films are funded and underwritten by one company or another.

“Our short films are branded, but so are feature films,” Beebe said. “If the brand does it in the right way, there’s no difference.” Indeed, movies like the blockbuster The LEGO Movie and Miu Miu’s stylish Women’s Tales make it easier for even the most cynical of viewers to look past the branding. With 84 percent of millennials claiming to dislike traditional advertising, the bar for quality is critical.

“That first year, people were unaware of what we were trying to do,” Apaliski said. “Now everybody sees it as an interesting opportunity.” Since then, Pereira & O’Dell has managed to attract major talent, from Maleficent director Robert Stromberg to actor Harvey Keitel. “If you have an interesting story, production companies, directors, and actors will latch on. If they can do it with the help of a brand and weave that brand in, they’re open to it.”

With four films under their respective belts, Marriott and Intel intend to continue their approach to video. As a content marketing format, film is inordinately expensive and creatively demanding, but these brands feel the outcome is worth the price.

“If we can find the money and the right concept,” Goldman said, “I don’t see a reason to stop.”