When you walk into the ground floor of Marriott’s headquarters, it fittingly looks like the lobby of a modern hotel—chic white lounges, cozy pods, even a friendly receptionist. But then you notice nine flashing screens encased in glass walls, like a TV control room that has been teleported from Hollywood to Bethesda, Maryland.

In a way, it has. Inside the control room—dubbed “M Live”—were three media veterans tasked with seeing just how much a hotel brand could capitalize on the fast-changing digital landscape.

It’s now been two years since Marriott hired Karin Timpone from the Walt Disney Company, where she had led the launch of successful digital products like WATCH ABC, so she could connect Marriott to the “next generation of travelers.” In June 2014, Beebe, also working for Disney, followed Timpone. By September 2014, Marriott had announced the launch of a global content studio.

Beebe and Timpone got to work fast. By early 2015, Marriott had created a successful TV show, The Navigator Live; a hit short film, The Two Bellmen; a personalized online travel magazine; and even exciting forays into virtual reality with Oculus Rift. The projects generated immediate success, from high engagement metrics to millions in direct revenue and even content licensing deals. Soon, the company beefed up its in-house staff, bringing in Matthew Glick from CBS as the senior director of the Creative + Content Global Marketing Group and Marc Graser, formerly of Variety, as editorial director. 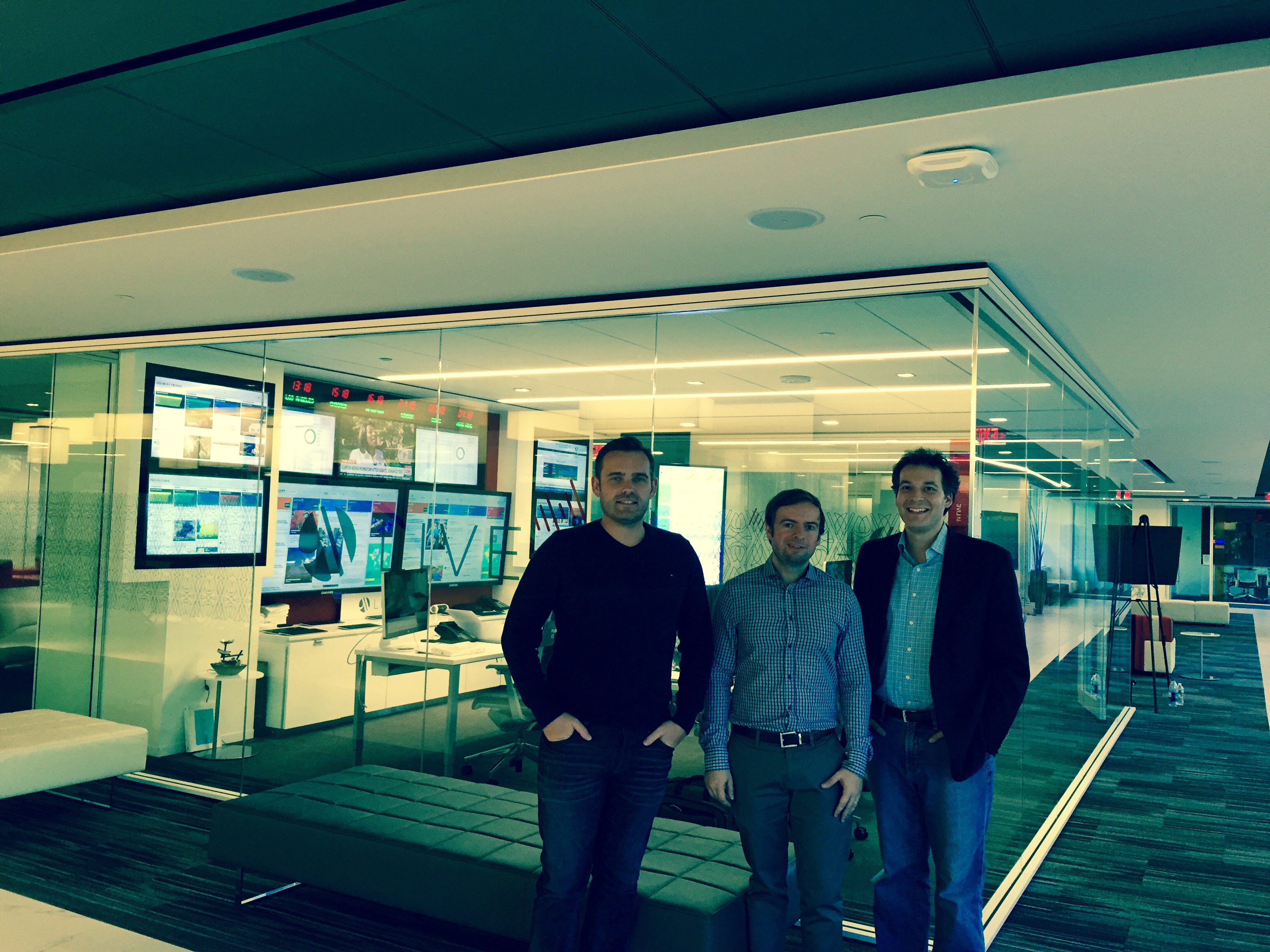 Beebe, Graser, and Glick outside the M Live Studio

“We hired a lot of media, took a lot of people who were previously storytellers, turned them into marketers,” Beebe said. “It’s all the same thing today. You can’t argue with the fact that people aren’t engaging with traditional [advertising] and this is the way to do it. You have to try it.” 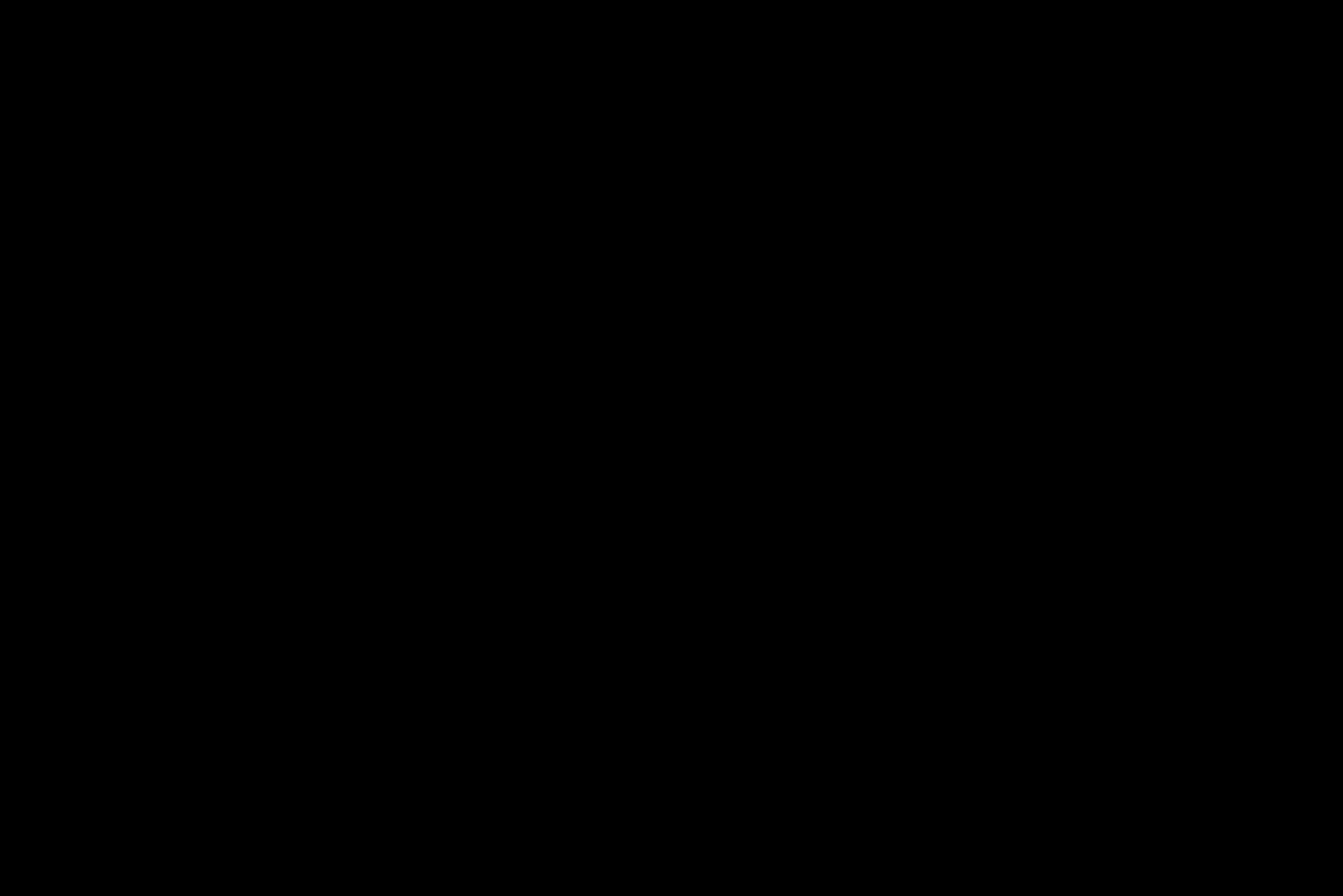 M Live, which launched in October, has nine screens, showing everything from the social media campaigns of Marriott’s 19 brands to real-time booking information to Marriott’s editorial calendar. But what might be even more impressive—and instructive for other brands—are the eight swivel chairs. Each seat in the glass room represents a different department such as PR/Comms, Social Media, Buzz Marketing, Creative + Content, and even one for MEC, a media-buying agency that amplifies well-performing content at a moment’s notice. 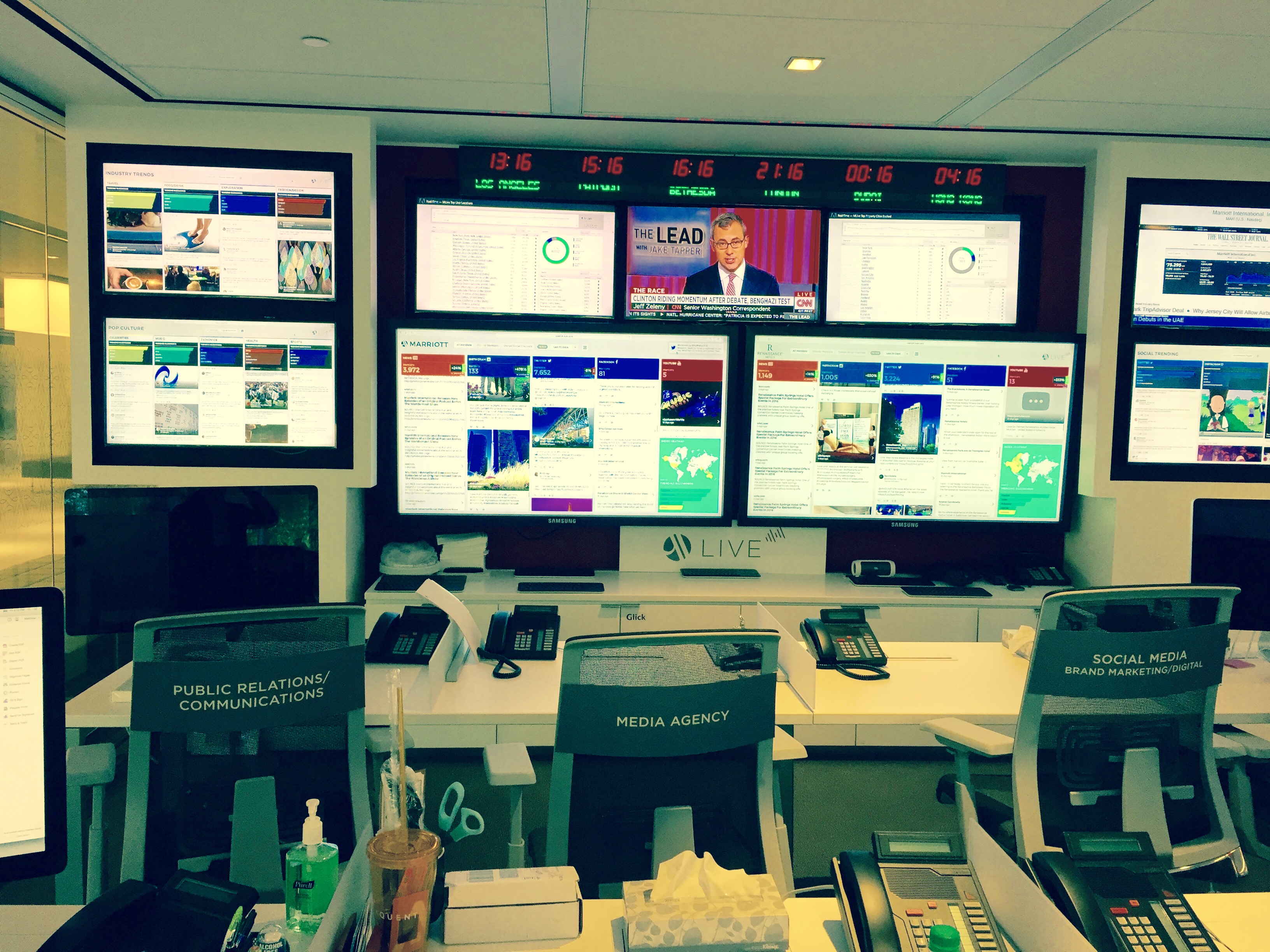 Ultimately, M Live is a reflection of Timpone’s efforts to build a global group and unify Marriott’s marketing teams, allowing them to act and react much faster on digital and experiential marketing opportunities for the company’s 19 global hotel brands.

“This is a tool for everybody to use in the building,” Beebe explained. “It’s customer-first thinking. That’s why a lot of brands can’t achieve what we’re doing. They think, ‘I can’t do that because someone over there is not going to like it.’ It gets very internal-political.”

Although Marriott is very much building a media business—with plans to license short films and webisodes to places like Yahoo, AOL, Hulu, Netflix, and Amazon—M Live and the Marriott Content Studio are still very much a marketing initiative.

“We did not get this far by saying, ‘I want to build a media company,'” Beebe said. “First and foremost, [the goal] is to engage consumers. Get them to associate with our brands, build lifetime value with them. Content’s a great way to do that.”

Part of the goal of M Live is for employees to be able to jump on real-time marketing opportunities. As Glick, the senior director of the Creative + Content department, stood in front of the scrolling screens, he rattled off Marriott’s recent progress.

“For Renaissance, for the last 30 days on Instagram alone, there’ve been just over a thousand mentions,” he said, pointing to one screen. “How that compares to the last month—a six hundred and fifty percent total increase. Twitter mentions, just over thirty-two hundred—a ninety-one percent increase from thirty days ago. There’s a lot of different info that’s coming in through here.”

Glick then turned to a screen that tracks pop culture events across various verticals, where the team tries to identify real-time marketing opportunities. In August, for instance, an anonymous donor offered $1 million for a stolen pair of Rudy Red slippers from the Judy Garland Museum. “That board just lit up,” Glick said.

The team quickly decided to create a promotion that sweetened the pot, offering 1 million Marriott Rewards points for any tip that led to the safe recovery of the shoes. One of the team’s content creators quickly whipped up creative for social posts, as well as a GIF that would play on the Marriott marquee in Times Square. In a matter of days, it was up.

Because the campaign was technically a promotion, legal approval took days instead of hours. But prior to M Live, Glick told me approval would’ve taken two months.

Simultaneously, Graser wrote an article for Marriott Traveler, a popular digital travel magazine created in partnership with Contently, about where folks could see the other three pairs of slippers. The campaign turned out to be a success, attracting 10.5 million viewers in Times Square and driving 4.5 million impressions on Twitter.

Soon, Marriott plans to scale M Live across the globe, with the next installment, in Hong Kong, set to open on November 18. “We’ll be building in London, in Dubai, and then Miami for Spanish speakers. All of these rooms, within six months will be open,” Beebe said. “They’ll all be connected to each other. They’ll all be talking. They’ll be staffed around the clock. You can’t run a global company from Bethesda, Maryland.”

The three Cs—with an emphasis on commerce

Beebe likes to explain Marriott’s approach with three Cs: “Scaling content, then building a community around that content, and driving commerce.”

The hotel giant believes that combination is the key to reaching millennials who are increasingly seeking more intimate connections and experiences when they travel.

“We’ve said it before—we have a very intimate relationship with our customers,” Beebe said. “They sleep with us, after all. It’s sort of a joke, but it’s true.”

That philosophy prompted Marriott to launch Marriott Traveler this past spring, which provides travel tips for exploring New Orleans, Chicago, and Orlando, with more cities to come. The company saw a huge opportunity to use content to build a stronger relationship with the built-in audience of 40 million people who visit Marriott.com each month.

“[We want to] get them into our world, help them find a place to go,” Beebe said. And once they find a place to go, the company trusts that the bookings will follow. So far, it has. “In its first ninety days, [Marriott Traveller] drove over seventy-two hundred room bookings.”

Marriott’s films are driving commerce as well. The company filmed its second short, French Kiss, in Paris. The film was shot at a Marriott hotel, but there were no strong sell. Since it was released in May, French Kiss has been viewed over 6 million times on YouTube. Perhaps more impressively, a bookings promotion related to the film also drove $500,000 in revenue for the hotel.

“The reason we did that one was to tell a great story, but also to inspire people to travel,” Beebe said. “Hopefully, if we do that over and over again, they’ll think of Marriott when they go to book to stay in Paris. We created content, we created community around it, and then we’re actually driving commerce against it.”

When it comes to creating content, Beebe and his team almost act like Hollywood producers, choosing to partner with content creators instead of doing everything in-house.

“A lot of brands will get into content marketing and want to produce the content themselves,” Beebe said. “They’ll spend millions of dollars building a studio. They’re going to shoot film, all this stuff. What happens? You get in your own way. Then it becomes an ad. You start inserting your product. It’s a turn-off.”

Marriott has joined forces with a wide range of creators, from famed producers Ian Sanders and Kim Moses on French Kiss to YouTube celebrity Taryn Southern, who will star in an upcoming web series series for Moxy Hotels where she interviews celebrities in their hotel rooms.

Beebe has also rejected the temptation to insert any overt Marriott branding. When he got the first cut back from The Two Bellmen for instance, his first note was to take out most of the brand plugs.

“We don’t want to see any ‘Welcome to the JW Marriott, here’s your keycard,’ and then a closeup of the logo,” he said. “None of that.”

This approach makes it easier for the brand to build trust with customers while also making the content appealing to other outlets. Ultimately, that means Beebe’s move from Los Angeles to Bethesda hasn’t been as drastic as you’d expect. “I’m doing the exact same thing I was doing before,” Beebe said. “Telling stories, creating content, developing and producing strategy—it just happens to be that there’s a brand involved.” 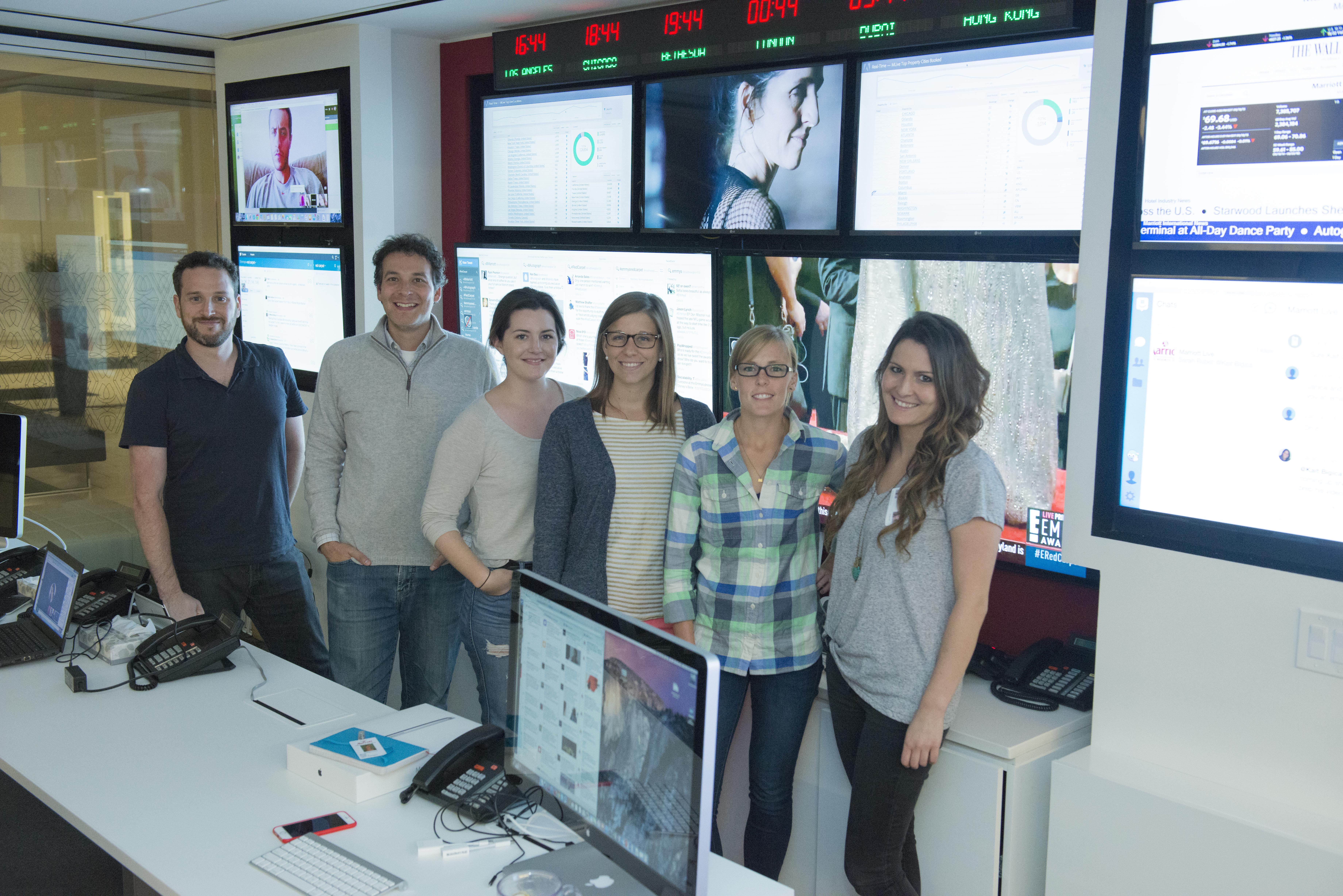 While M Live and the Marriott Content Studio are making great strides reaching people externally, they’re also impacting life inside the company. The content team has put in hard work evangelizing and explaining what they’re doing, and part of the reason they built M Live smack in the middle of the lobby for all to see.

Glick, for instance, spent three months leading a project to create a binder that explains M Live, and how anyone in the company can help if they have an idea or see a trending story. They’ve connected the M Live team to customer care to handle any complaints or problems, and each Marriott brand is getting deeply involved with the content creation process. “People are getting it,” Beebe said. “Now that we’ve done a lot, they’re starting to see the impact.”

Even Bill Marriott comes down to see what’s going on.

“He loves it, loves the idea of what we’re doing,” Beebe said. “He’ll just come sit down and chit-chat and pick up the phone. He’s actually gotten on Matthew’s computer and shown his wife stuff.”

But it’s that support from Mr. Marriott and CEO Arne Sorenson that’s pushed the ambitious content operation forward so it can keep transforming the company.

“That’s really what our goal is,” Beebe said. “To take all the brand marketers, all the brand leaders and teams, and turn them into great storytellers.”