13 Stats That Should Terrify CMOs

As an English major, I find numbers terrifying. In college, I skipped more than half of the classes for my required math course—not because I was some sort of badass, but because learning the ins and outs of concepts like “correlation coefficient” and “factorial” stirred a fear deep within me.

So when marketers talk about how much they work with numbers now that we’ve entered the sci-fi[note] or dystopian, depending on your perspective [/note] age of Internet data collection, I cringe. Let’s just say I’m glad I’m covering marketing for a living rather than actually doing it.

But just because numbers may be marketers’s new best friend, that doesn’t mean they’re all good. Some, in fact, are a bit terrifying.

And because I’m a sick bastard who wants you all to feel my mathematical pain, I’ve gathered 13 stats that should send chills down any marketer’s spine. Just to be clear, all of these statistics have pros and cons, and some stats may not have an impact on your marketing strategy. But hopefully at least one of them will get you to jump. Enjoy.

Banner ads have been around since the Internet’s earliest days, and by all reports, they’ve never been all that effective—that shouldn’t come as news to anyone.

What’s incredible is just how ineffective they really are. I could make a joke that the only time users click on a banner ad is when they pass out and bounce their head off the mouse. According to the data, that’s actually pretty much accurate.

But it’s worth pointing out that CTR isn’t everything. Plus, rich banner ads (basically anything with interactivity, animation, and/or video elements) have a 0.44 percent CTR, which is 267 percent increase. Which still isn’t great, but hey, 267 percent!

Which brings me to our next stat…

Even as money shifts from desktop to mobile, the efficacy of banner ads isn’t going to improve. That 0.02 percent bump is probably due more to how easy it is to accidentally click on a mobile banner ad than anything.

Still, it’s important to note that, on average, banner ads aren’t a huge part of the media-buying war chest. Estimates predict that rich banner ads, the more effective of the two formats, will make up only about nine percent of total ad spend in 2015.

3. Adblocking grew by 41 percent YoY in the past 12 months

This is a highly contested number, as the companies behind the research, Adobe and PageFair, have financial incentive to make adblocking seem more dire than it is. But even if these numbers are exaggerated—and a recent study from the Reuters Institute for the Study of Journalism at the University of Oxford indicates that they are not—the adblocking problem is serious.

As David Kint, CEO of media trade organization Digital Content Next, which represents publishers for the advertising community, recently told me: “It’s real, and it’s tied to a tech arms race happening because the consumer has been ignored for too long. Current adblocking revenue projections dwarf the entirety of digital advertising revenues across our entire membership.”

While adblocking affects the bottom line of media and Internet companies more than ad buyers, the way the public has taken to anti-ad technology suggests users aren’t happy with Internet advertising. And if ads are annoying potential customers more than enticing them to buy your product, you’re spending a lot of counterproductive money.

4. Safari makes up 55 percent of the mobile browsing share

On the surface, this stat doesn’t mean much. But with the news that Apple is planning to launch the iOS 9 version of Safari with adblocking capabilities, the mobile ad market could take a serious hit.

While money will likely just flow elsewhere—social media apps, for example—ad buyers reliant on cheap mobile ads and Google search ads won’t be pleased that a large segment of the mobile audience (and affluent ones, at that) will be out of reach. Apple’s move could also set a trend of mobile adblocking in motion, though Google will likely push back at any attempt to popularize adblocking on Android given how crucial ad revenue is to its business model.

5. 28 percent of users said they tried to hide their activities from advertisers, second only to criminals 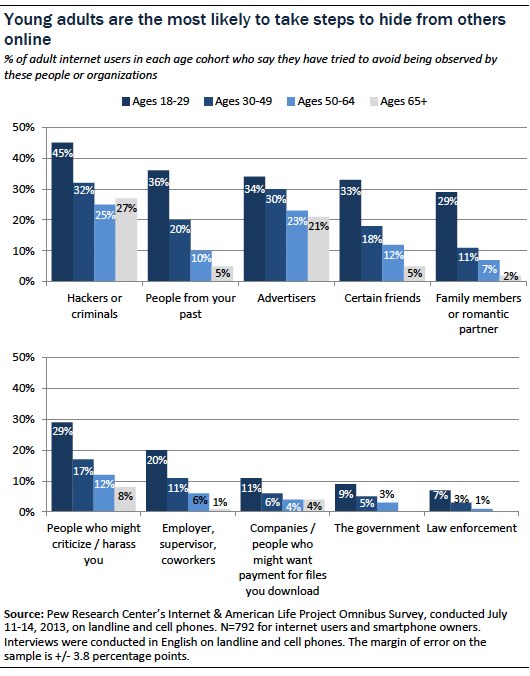 Unfortunately, this survey was taken in 2013[note] I’m sure government has since shot up the list[/note], and there is no updated version, but it’s unlikely that users have warmed up to being tracked by ad and marketing technology.

Making users resent your ads is not a productive use of resources, and it’s an issue all Internet companies (social media companies, in particular) will have to think about as data collection becomes more and more rampant.

6. By 2018, chat apps will make up 75 percent of mobile messaging traffic share—but only 2 percent of revenue 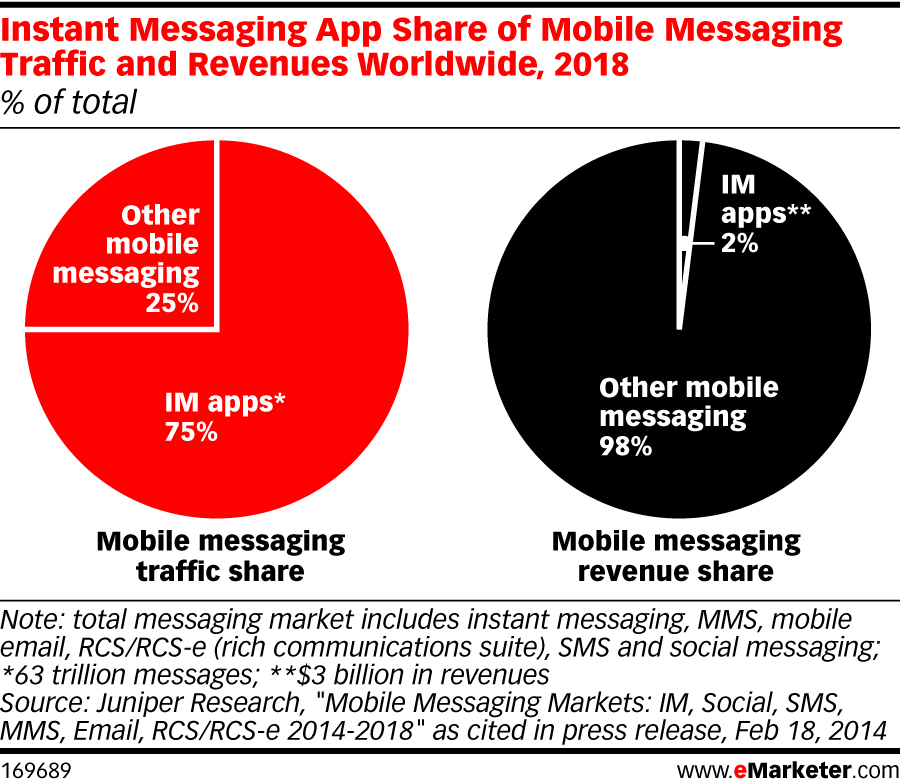 Chat apps like WhatsApp, Facebook Messenger, and Kik may be growing exponentially in the U.S., but that doesn’t mean marketers will be getting in on the action anytime soon.

As more and more people—particularly teens—choose to communicate over more private micro-networks rather than SMS or social media, advertisers, at least at first, may lose out. As this stat demonstrates, chat apps are often built on a business model of audience growth first, monetization second—which means marketers will have to wait for apps to reel their audience in with strong user experiences before they can get involved.

But there is some good news—Facebook has made clear that it plans to eventually monetize WhatsApp and (potentially) Messenger, two of the most popular chat apps, once they reach 1 billion users.

7. Pay-TV households are now shrinking at an annual rate of 0.7 percent

This stat isn’t nearly as clear cut as others since the move away from traditional cable has upsides: Digital ads tend to be cheaper and come with benefits such as better data collection.

Still, the gradual migration to over-the-top (OTT) TV services could end up affecting ad penetration. Anyone using an adblocker on video sites like YouTube isn’t going to see your ad, whereas on cable TV, they have no choice (except for getting up and leaving the room or watching shows on DVR).

There’s also the fact that the most popular digital video services—Netflix, YouTube, and Hulu—will, or already do, offer ad-free options. Considering that people spend more time with digital video than any other digital content, that’s a huge amount of time consumers are going to spend without an ad in sight. Great for users—bad for advertisers.

8. Only 12 percent of marketers believe they have “high-performance” content marketing engines

Even worse? Of 200 senior marketing leaders, only two percent “consider their existing approach to demand generation highly effective,” per the CMO Council.

As Tessa Wegert discussed in a recent article, the stats don’t look good, but it’s important to remember that content marketing is still in the fetal stage, so check out her article if you’re part of the 88 percent. And if you’re part of the 12 percent, well, you should give yourself a big pat on the back.

In other words, if you’re still trying to live on organic social media traffic, it’s probably time to give up.

Facebook, Twitter, and LinkedIn have all moved to a paid social media model, and spending for reach and clicks on specific posts is almost always more effective than than spamming as many posts as possible, as Shane Snow demonstrates in this fascinating breakdown of paid versus organic social media sharing.

10. “45 percent of marketers still either don’t formally evaluate their analytics for quality and accuracy or, even worse, don’t know if they do or not.” 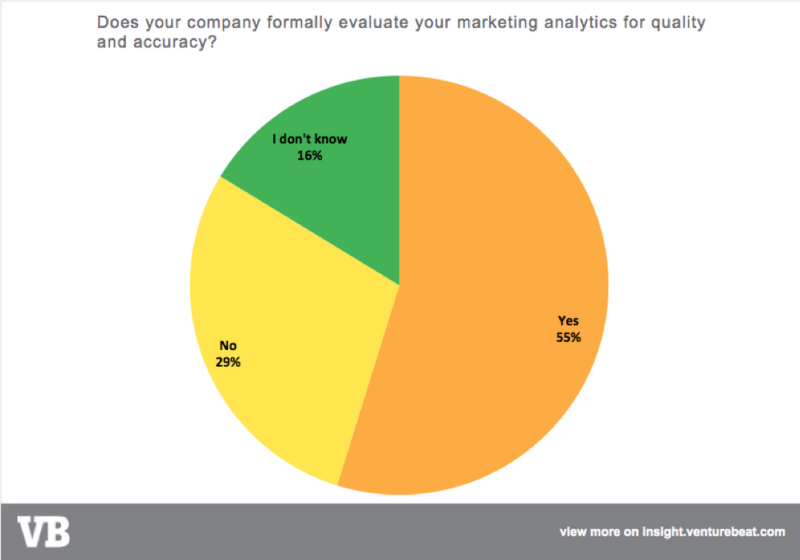 It appears that even though analytics have taken center stage in the marketing world, some practitioners aren’t checking their work.

That’s a gigantic problem since blind trust of numbers can be just as damaging as trusting whatever the latest self-proclaimed “marketing guru” posted on LinkedIn.

Check out VentureBeat’s “State of Marketing Analytics” for more.

11. 56 percent of display ads are never seen by humans

If it seems like I’m picking on Internet ads here, you’d be right. Unfortunately for advertisers, there are just a lot of problems facing display ads, including this fun stat from Google that proves that a majority of ad spend is going to waste.

I guess John Wanamaker was right.

The major issue here is viewability—some publishers run ads that fall outside of the IAB’s relatively lax standards of what constitutes a “viewable” ad. Another issue is the incredible amount of fraudulent bots, which have exploded in the past few years.

Traffic bots have become a big industry as the focus on clicks and impressions in digital advertising has allowed criminals to send fake traffic and drive programmatic ad revenue.

Jordan Teicher discusses the issue in more detail here, but make no mistake it’s one that has flown under the radar compared to more visible problems like adblocking and viewability standards.

13. Two-thirds of readers have felt deceived upon realizing that an article or video was sponsored by a brand

Deception isn’t something you want customers associating with your brand, but it’s one of the many downsides of native advertising and sponsored posts we discovered last year in our extensive study.

While it’s true that native advertising does have its benefits—and that certain practitioners like The New York Times‘s T Brand Studio have created proven, effective native ads—the thin line between editorial and advertorial can be damaging for both publisher and advertiser. And when ad buyers are spending fortunes for native ads, the leeway for negative results like mistrust can be hard to swallow.

Luckily, the solution is pretty obvious: better labeling. Brands should feel proud to put their names next to a great piece of native advertising, and publishers should want to better separate their journalism from their ads. Only then will the numbers start to work in their favor.