Why Paying for Social Is Better Than ‘Doing’ Social

For businesses, social media is like meth. I say this based on encyclopedic knowledge of drugs obtained via Breaking Bad marathons. Meth’s great for a while, but over time it’s harder to get the results you once got. At some point, you’re spending all your time and money thinking about it. And by the time you start worrying about your teeth falling out, it’s too late.

“The average organic reach for posts from Facebook pages in March was 2.6 percent of a brand’s audience. … This percentage dropped to 2.3 percent for pages with more than 1 million likes.” (Source: Localytics, reported by 1to1Media) 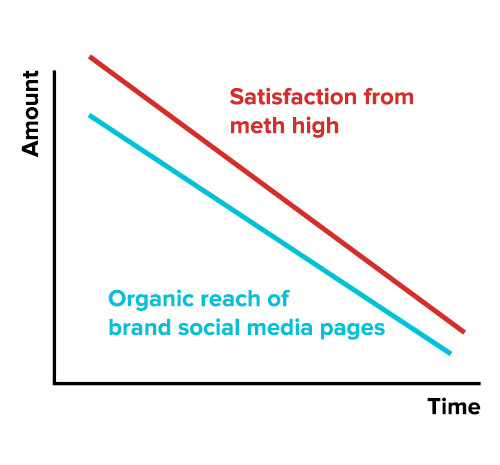 Other social networks are showing signs of decreased reach as well, albeit less rapidly than Facebook. There are two widely cited reasons for it: 1) Social media sites want to encourage businesses to pay them money for the value they now get for free; and 2) As more people and businesses post to social media more often, everyone gets less attention, so supply and demand push reach down and rates up.

This was inevitable. Because social media provides a direct line to consumers, we’ve bestowed it an enormous amount of perceived value for business. But as the industry matures, our buck’s bang will slip to an inevitable equilibrium—like it has with Google AdWords and other saturated marketing channels. In a nutshell, social is becoming less easy to exploit. We were on a high; now we’re on a comedown.

For a long time, the echo chamber preached that the best way to reach people is to create ongoing content on social (either promoting more substantial content from an owned property or creating so-called “snackable” social-native content), and that by doing so we’ll rack up loyal audiences who we can repeatedly reach whenever we want. Recently, it’s become clear to me that that’s no longer entirely the case.

In fact, it may be cheaper and more effective to pay for social media promotion than to rack up big follower counts and constantly feed them.

What follows is essentially a Fermi estimation, a napkin calculation meant to find a ballpark answer to the question What is the value of organic social media for business?

Say you’re a business that has 100,000 followers on Facebook. Your average post will be seen—just glanced at, not clicked on—by 2,600 people, according to Forrester. (Though its data shows the average by now may be lower, between 0.7 and 2 percent, we’ll go with 2.6 for optimism’s sake). Studies on Facebook click-through rates vary, but for this thought experiment, let’s go with the highest stat I’ve seen (5 percent of impressions). At that rate, something like 130 people will click through to whatever it is you’re sharing.

Twitter impression and engagement rates vary across the board, but the service doesn’t (yet) discriminate between brands’ content and individuals’ content. On average, I’ve found that my own tweets reach about 5 percent of my total followers on an average day and a 0.125 percent click through rate, in which I send five tweets. For a 15-tweet day (the max I’ve seen recommended before returns start really diminishing), with 100,000 followers, I’d get about 125 click-throughs a day. About the same as Facebook. (We could double that and assume that a brand will be better at optimizing for click-throughs, like Contently’s Twitter account does versus my personal, but as you’ll see below, even twice the effectiveness won’t change the end conclusion.)

LinkedIn is probably the best-performing social network for our own content (mine personally and Contently itself). It has some rather crazy stats, via Buffer: 20 percent of your followers see your average post. (We actually get higher than that!) I couldn’t find average click-through rates on LinkedIn, so for Fermi estimate’s sake, let’s say that it gets as many total click-throughs as Facebook. That means a post to 100,000 followers would yield 20,000 impressions and 130 clicks to your website.

Contrast this with email, which boasts industry averages of around 20 percent open rate, and 3 percent click-through after the open. If you have 100,000 email subscribers, 20,000 of them will read the email itself (which may or may not have content in it), and 3,000 of them will click through to your website. These rates go way up with better content and headlines. (Our emails average a 4.8 percent click rate.)

Social media service Buffer recommends that businesses post 1x a day to Facebook and LinkedIn, and 14x a day to Twitter. Data shows that posting more often than once per day on Facebook yields heavily decreasing click through rates (for businesses). And more than one email per day is grounds for immediate unsubscribe, but otherwise 7x a week is not too much for good emails. We’ll go with once per weekday to give our hypothetical marketing person the weekend off.

So, over the course of a month, here’s what the optimal cadence of content sharing would get a company:

On their face, these stats make a clear case for prioritizing email as an audience engagement channel—especially since the reach on social networks will continue to decline. Emailers are in far less danger of a catastrophic algorithm change than Facebook marketers. Furthermore, an email impression (someone clicking to read) is a much better impression than a Facebook impression (someone seeing something scroll through the News Feed).

But what’s really interesting is what happens when you pit organic social media against paid social media. We wrote about the pros and cons of the leading paid link-distribution services a few weeks ago. Here’s a cost summary at last brush:

(These clicks vary in cost because of targeting and quality. E.g., LinkedIn costs 8x as much, but the traffic tends to be extremely high quality versus the others.)

(Also, this is the part where I must disclose that our company has and will likely continue to do business with all four of the companies I’ve mentioned: Facebook, LinkedIn, Twitter, and Outbrain. That doesn’t change the way I personally write about them, but you as a reader should know.)

At average rates, the value of the organic clicks you might get from one month on each of these channels would be approximately the following:

A good social media agency will typically charge (in my experience) $10,000–$25,000 a month. A dedicated social media manager in-house might cost $4,000–$10,000 a month. This does not include the cost of acquiring the 100,000 subscribers for these networks, which is often done inefficiently. If we said it cost $1 to acquire a social follower, it would take almost 6 years for organic Facebook clicks to pay off the cost of acquiring your followers, versus just buying the clicks through paid updates.

It could take almost 6 years for organic social media clicks to pay off the cost of acquiring your followers.

Let’s ignore the fact that six years from now social media will be entirely different, and let’s pretend we got all these followers for free. LinkedIn excluded, if, say, it costs a company $10,000 a month to maintain its social media accounts, the company would need half a million followers on each network to justify its own social media maintenance cost.

Otherwise, it’s better off just paying for each click.

The place where paid social really pays off versus organic is when you look beyond the simple click. Here’s what I mean:

The average post on this site gets about 3 minutes of attention time per person. 250,000 social media clicks to our content year round will net us 12,500 hours of attention.

The top 10 percent of our stories garner over 5 minutes of attention time per reader. The same number of social media clicks to just our best pieces would net us an additional 8,000+ hours of attention, nearly doubling each click’s value. Each of those readers will be much more likely to 1) subscribe to our newsletter and come back, 2) share our content with others, further decreasing our cost per click, and 3) become customers and advocates for our brand.

With every optimization like this, paid social becomes a better and better financial deal over spending money to manage organic social—or at the very least to create an ongoing stream of unique content for it. Of course, you’ll need someone to run those paid social campaigns, and you need good content to promote in the first place. And you need that content to change if you want to continue to build relationships with people.

The smartest strategy, we’ve found, is when you combine paid social with email, parlaying paid social clicks into subscribers of the highest-impact organic channel out there:

About 5 percent of new visitors subscribe to our email when prompted, so if we spend $100 on Facebook or Outbrain at $0.20 a click, we get 500 readers and 25 new email subscribers. In the course of a year, those subscribers pay themselves off eight times over.

What these calculations tell us

For businesses that want social media clicks: At current rates, a brand that has fewer than 1 million followers on Facebook or Twitter is better off paying to promote its best content via sponsored updates than it is paying someone to post social content all day long. And it probably won’t pay off the cost of acquiring followers it already sunk, versus paying just for clicks. As organic reach continues to decline, it will soon be unprofitable for brands with more than a million followers to feed their followings.

“It’s clear that Facebook and Twitter don’t offer the relationships that marketing leaders crave … Yet most brands still use these sites as the centerpiece of their social efforts—thereby wasting significant financial, technological, and human resources.”

Whereas we can (and ought to) conclude from this that brands should spend less time churning out social media content for the Internet to devour and more time creating thoughtful, higher-quality content and putting paid social and email marketing behind it, there’s one thing we ought not to overlook: A ton of people still arrive at a company’s website via social media. Specifically, traffic comes from content that regular people—not the company itself—share with their friends.

There are two ways that businesses ought to take advantage of this. First, provide easy ways to share your content. Make those “Tweet this” buttons prominent and easy to find. Second, prioritize building your people’s social media footprints over your corporate accounts. A company with executives with great social followings will get a lot more reach than one with an equal amount of followers for its corporate accounts.

And, as the above calculations would indicate, smart companies will put paid spend behind those individuals’ most engaging posts and implement an email capture strategy.

Says Elliott, “If you have to choose between adding a subscriber to you email list or gaining a new Facebook fan, go for email every time.” (Our favorite tool on that front is SumoMe.)

Most important, we ought not to blindly keep playing the same social media game when the game owners are changing the board. In the meth business—Walter White tells me—rule #1 is to not get hooked. As Facebook and Twitter’s empires mature, dumping resources into organic social over paid is a good way for brands to lose their teeth.