10 Ways for Brands to Get YouTube-Famous

Gone are the days when celebrities existed solely on the silver screen. Over the past couple years, YouTube has been the source of hundreds of Internet stars—Smosh, Blogilates, Seven Super Girls, and Savannah Brown, to name a few. Sure, their names might be not be as widely recognizable as Brad Pitt or Angelina Jolie, but they have fiercely loyal fans and tons of lucrative sponsorships. The comedy duo Smosh, for example, is so popular that they’re releasing a feature film based entirely on YouTube culture. In other words, these people have mastered the online video market.

So, what can companies do if they want to create a similar kind of success for their own, branded YouTube channels? After interviewing Graeme Newell, founder of 602 Communications and branding researcher, I’ve honed in on 10 ways to make your brand more YouTube-famous:

Smosh produces so much content that they have five—count ’em, five—YouTube channels: Smosh, Smosh 2nd Channel, Smosh Games, El Smosh, and Shut Up! Cartoons. In the past week alone, the main Smosh channel has released four videos that collectively have millions of views. Smosh has built a huge subscriber base because fans can constantly interact with the content and are never too far from another fix.

The same rule applies to brands—if you have a sufficient amount of time and money. For example, the cosmetics company Sephora uploads a new video to its channel almost every day: 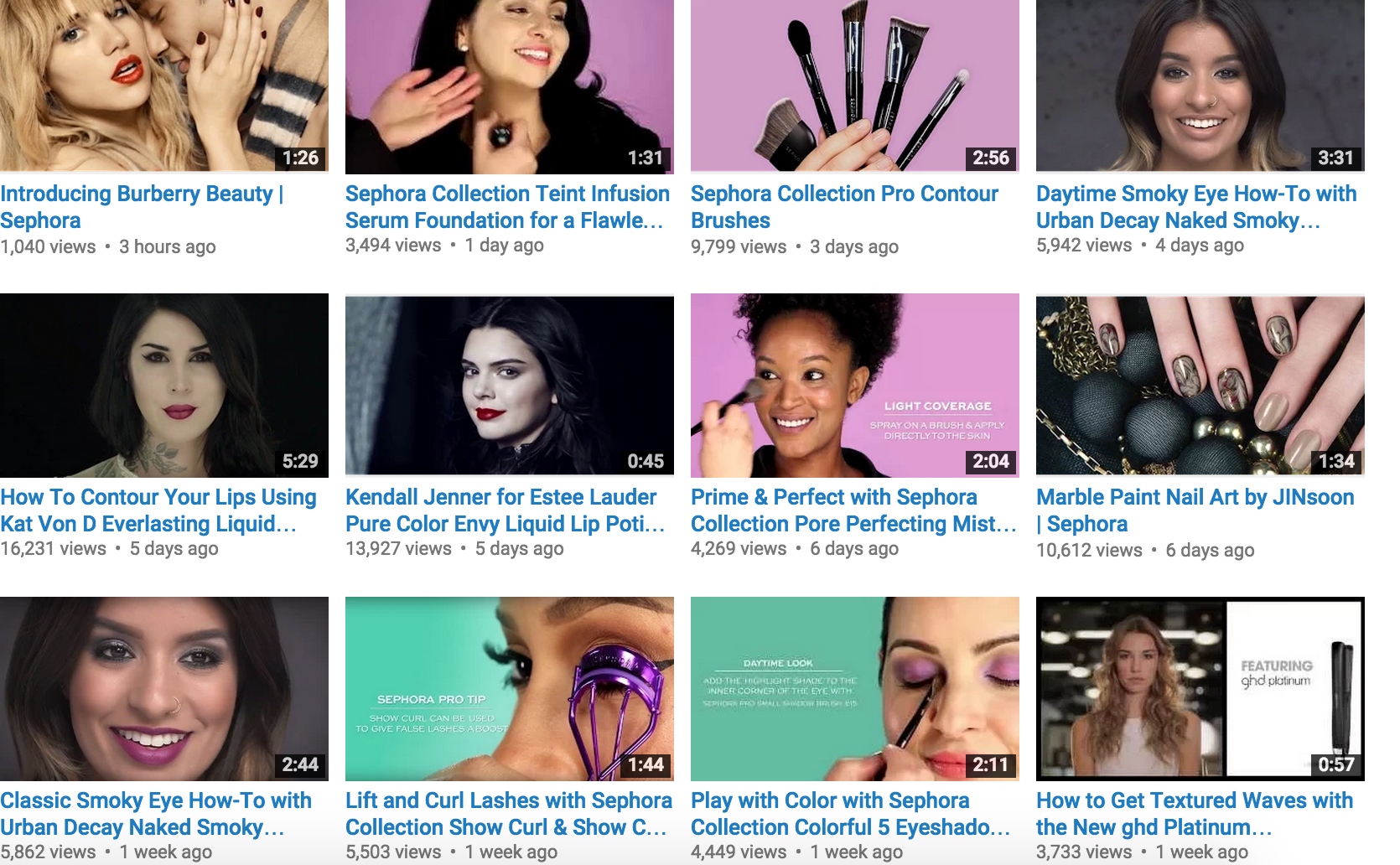 All of these videos add to the Sephora customer experience by demonstrating how to use the company’s products in fun, innovative ways. How-to videos are very popular on YouTube. If your company creates anything that can experimented with, whether it be food or Legos, this sort of material will never go amiss.

“What we’re trying to do with a YouTube channel is create buzz,” Newell said. “And creating something that transcends a transactional relationship is amazing.”

2. Find a niche and stick to it

Knowing your audience is the top prerequisite for any marketer. What kind of person are you looking to appeal to? While generic videos are safe, they won’t incite a passionate following.

Cassey Ho, the creator of Blogilates, a series of pilates workout videos, is so popular that she has meet-and-greets all over the country. Her over-the-top peppiness, which causes some people to skip her videos, is the biggest reason why her fans love her. Viewers regularly comment on her videos about how Ho’s attitude keeps them going.

“People, particularly millennials, want a brand that stands for something,” Newell said. “The biggest mistake that people make on Youtube is that they try to sell things. They try to make their channel a catalogue, and the voice that they use is one of Madison Avenue. … Instead, you should be saying that you stand for an incredible mission.”

Cassey Ho’s mission is to make working out fun. Her videos show her passion, and as a result, people want to follow her.

3. Interact with your fans

It’s impossible to have ardent fans if you ignore them. That’s why interacting with your viewers is crucial to a channel’s success. One of the best ways to do this is via YouTube’s Creator Dashboard, a tool that shows which of your followers interact with your channel the most. If you recognize and thank them for their support, they’ll probably become even bigger fans.

REI is a great example of a company that takes feedback from its consumers seriously. It even sources some content directly from its customers. For example, the Video Weekend Project is a compilation of adventures that REI fans have captured on video. My personal favorite is the 20-second clip above that involves a lot of athletic people and their dogs.

“REI isn’t playing down to their customers,” Newell said. “Instead, they’re saying, ‘We’re hiking enthusiasts just like you.’ And they have a conversation with their consumers, which is what I think a lot of Youtube channels are missing.”

4. Have a call to action

Every YouTuber big or small should have a call to action. Sometimes this comes in the form of a request to subscribe to a channel or to watch similar, clickable videos that appear at the end of the clip. Here’s a still from a Smosh video: 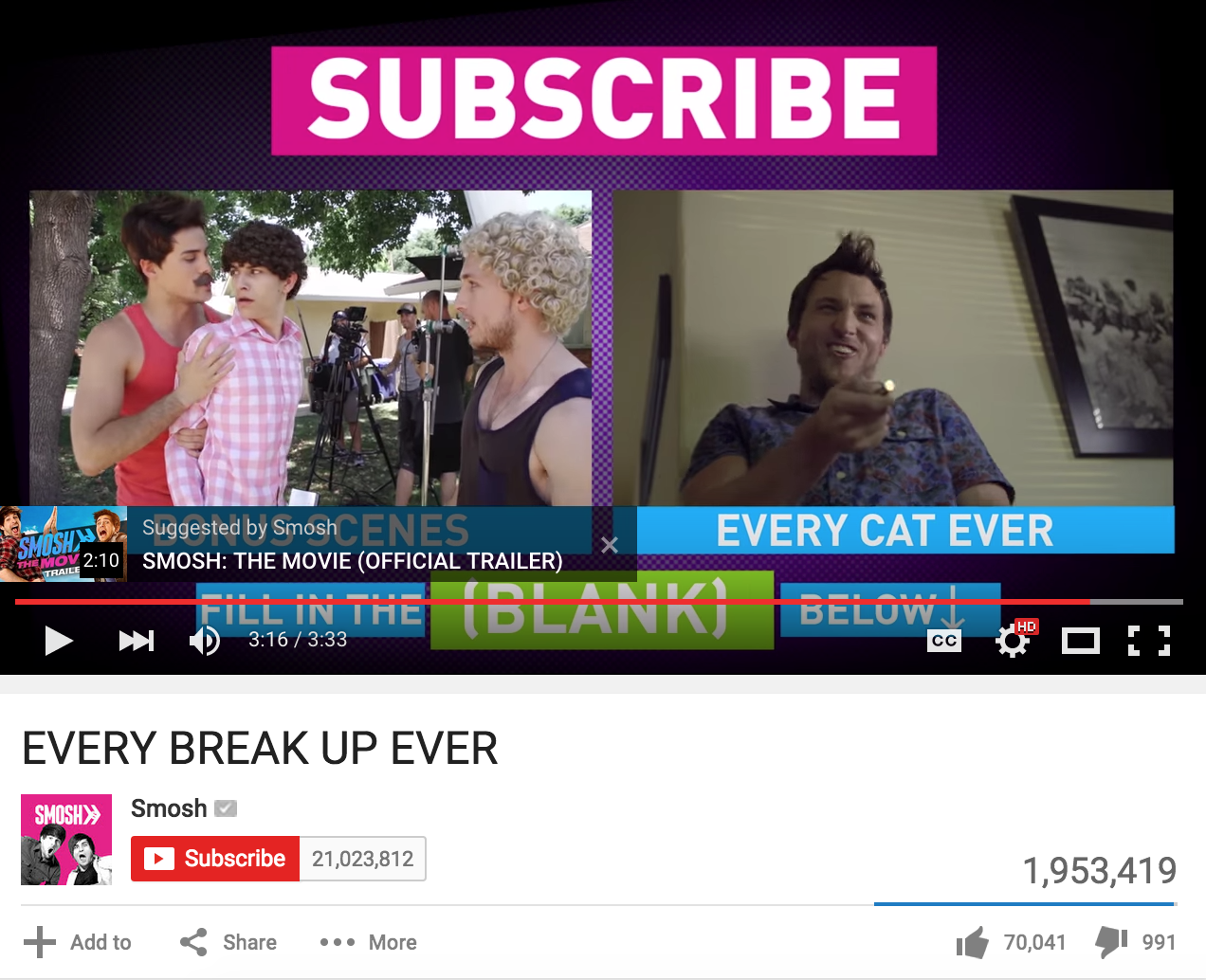 Not only does Smosh prompt people to subscribe to their channel, but they’ve also included links to the trailer for their upcoming movie as well as videos that relate to the one that’s currently onscreen. Plus, all of the info stays up for 20 seconds, giving viewers plenty of time to subscribe and choose something new to watch. It’s simple, and if you want any sort of consistent YouTube growth, this tactic is a must.

In an ideal world, everyone knows about your YouTube channel and eagerly awaits everything you post. But your company might have followers on other social networks who could become devoted viewers. These potential subscribers are fish in a barrel—and brands that make an effort to link their videos on social will always have an easier time driving up engagement. 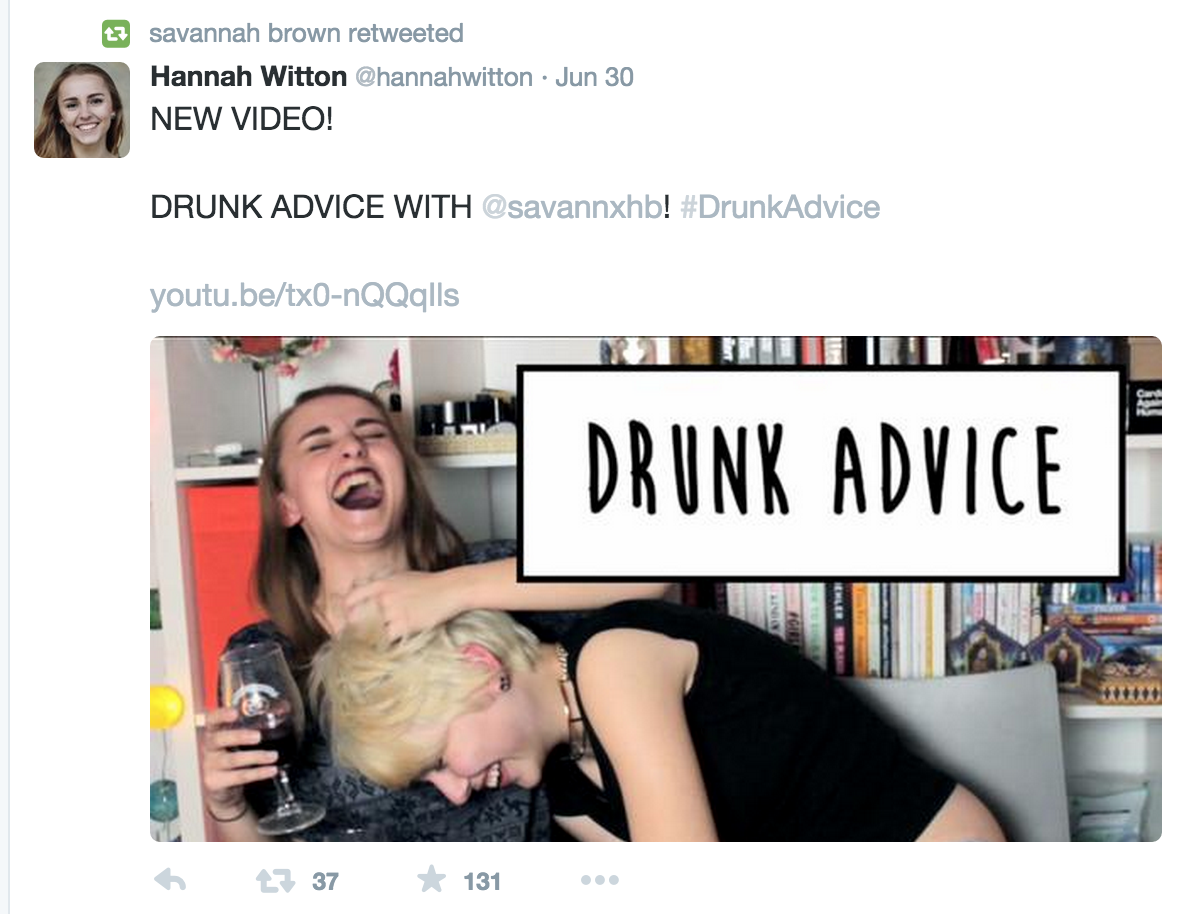 I’ve written about my love of humor for Contently before. As I noted, it can be easy to mess up when it comes to comedy. If one of your videos goes viral, that doesn’t necessarily mean you’re a comedic genius—it could just mean it’s genuinely bad. Take this retro doll ad, for example. Sorry in advance for the nightmares.

“Create something that’s entertaining, but also create something that demonstrates your company’s values,” Newell said. “If there’s authenticity to humor, then it’s fantastic. Humor has to be a way to more effectively communicate with your customer.”

Old Spice is a perfect example of a brand that knows how to effectively communicate with its consumers. When your target market is teenage boys and you’re trying to convince them to use your product to eliminate body odor, humor definitely makes sense.

Just last year the Old Spice man visited my college—and people freaked out. A joke about men’s body spray had lasted for five years, and still resonates with millennials. If your company can create that kind of humor, then you’re set.

Old Spice is also a company that has mastered the art of spin-off content. Its original “The Man Your Man Could Smell Like” video came out five years ago, yet just this week it released another video featuring the same man, as well as the brand’s new character and spokesperson, Terry Crews. I say character because he plays a, let’s just say, exaggerated version of himself.

And by exaggerated, I mean that he can survive fire. And can fit inside a human stomach. And has a residential neighborhood resting within his abs. You know, normal stuff.

But why are these videos so popular? They appeal to what Old Spice users loved about the first video—they’re ridiculous, involve a lot of muscle, and make you feel just a little bit like you’re on drugs. Most importantly, instead of just relying on past success, Old Spice added something new to keep the campaign fresh.

Keep in mind that your company’s channel isn’t going to become a success overnight. “Youtube channels rarely get popular quickly,” Newell said. “It takes a lot of back-end work to make that happen. There are agencies that are masters at this, and even they have a hard time.”

Fred, the first YouTuber with a million subscribers, started his channel when the video sharing site was still new. As a result, getting views was difficult at first. But now, even his videos that were created way back in 2008 have racked up millions of views:

Of course, a brand can put hundreds of hours into its channel but still fall flat with viewers. But if you give your investment time to develop and have the right creative pieces in place, you should see results over time. Every video won’t go viral, but as long as your channel is full of high-quality work, viewers will explore what you have to offer if a clip does take off.

9. Go outside of the company

There’s nothing less convincing than an employee telling you why you should buy a product. Why should you trust them? After all, they’re getting paid to promote something that they might not fully believe in.

“Most of the people that create these channels grew up with the slick Madison Avenue approach to advertising,” Newell said. “In this day of authenticity, with people’s need for genuineness, that’s poison.”

According to Newell, it’s important to have somebody from outside of the company be in charge of its YouTube channel. “Rather, you should hire somebody who’s an enthusiast for your company’s sector,” he said. “For example, Sam Adams beer should hire a guy who loves and is an aficionado of microbrews. He should tell the story of the love of beer, rather than Sam Adams the company. He should run the channel because he’s authentic and is talking about something that has true value to him. ” 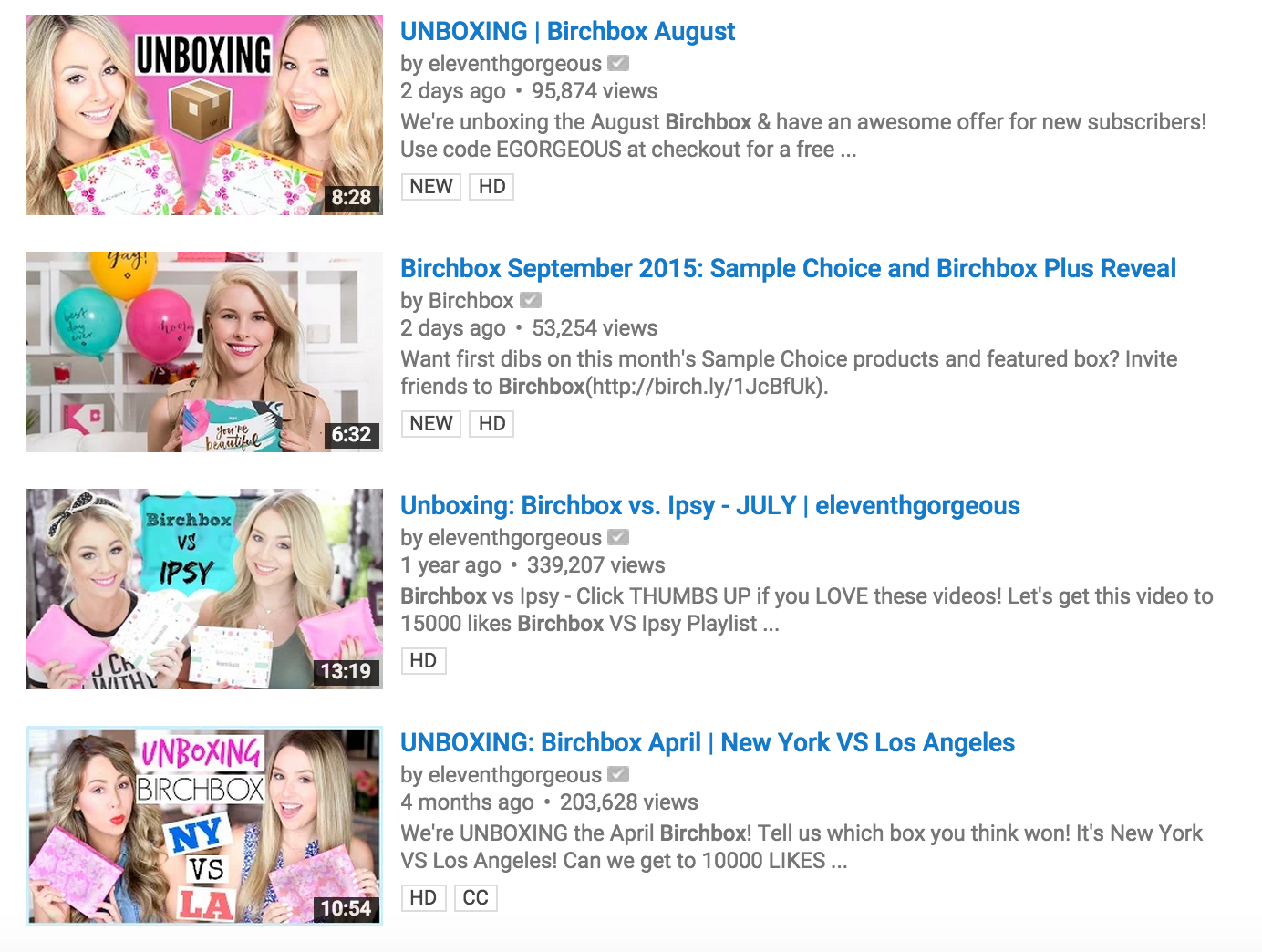 Birchbox, which has teamed up with countless beauty vloggers, is just one of many companies that has relied on this strategy to help build up its channel.

In two sentences, Newell summarized the problem that most companies are making with their channels: “The biggest mistake that people make on YouTube is that they try to sell things. Instead, you should be saying that you stand for an incredible mission.”

As an example, Newell points to a recent Quaker Oats video, “The Recital,” which promotes a family-friend mission statement while barely mentioning the product. “It’s not even important that Quaker Oats is a part of the story,” he said. “This just shows that they believe in family. Quaker does a great job of telling family stories without including a product pitch at the end. They just share a clear mission.”

Last year, a survey of American teenagers commissioned by Variety suggested that YouTube stars were already more popular than Hollywood celebrities. Smosh, who topped the list, beat out people like Jennifer Lawrence and Johnny Depp. Brands have a real opportunity here to be personal, to connect with people in a way that’s becoming increasingly difficult on TV. They can become famous on YouTube—and enjoy all the perks that come with that success.