Sometimes it seems like the writers’ rooms for “funny” branded content videos are staffed by an accountant, a cranky middle-school librarian, and your friend’s dad who loves puns but doesn’t understand how they work.

While making funny content is a great idea in theory, it takes a lot of hard work to earn actual laughs from an audience. Take, for example, this commercial from Kmart, which tries to be funny and trendy by placing GIFs in real life. It’s a decent idea, but the execution is basic and a bit annoying.

That’s not to pick on Kmart; it’s easy for brands to miss the mark when it comes to comedy. As a result, it’s all the more impressive when brands create something that garners a genuine, laugh-out-loud reaction.

Here are the top five companies that are owning the comedy game:

Geico is posting content where they know that the oh-so-desired millennial consumer will see it: BuzzFeed. According to Quantcast, over 118 million people visited the site between May 11 and June 9 this year. By becoming a branded sponsor for BuzzFeed, Geico ensures that their posts will be seen (and hopefully shared) by a massive, growing demographic that would rather give up its sense of smell than its technology.

And Geico hasn’t just chosen a great location to advertise; they’re also producing content that completely jives with BuzzFeed’s tone. After all, visitors are more likely to click on “88 Thoughts Every Cat Owner Has Probably Had At Some Point” than “5 Reasons Geico is Great.” The articles themselves are virtually indistinguishable from every other BuzzFeed piece, save for the Geico branding.

As a result, readers will be more likely to perceive Geico as a cool, relatable brand that isn’t pushing flashy advertisements in their faces (if you have any doubts that this works, check out Buzzfeed’s case studies). In addition, because Geico publishes a new article on Buzzfeed every week, the company is constantly on millennials’ radar—reinforcing the brand’s ability to get silly.

The Australian Metro (a transportation organization, not a newspaper) has managed to garner over over 82 million YouTube views for what is essentially a public safety video. How? With a strange but memorable mix of adorable cartoon characters, dark humor, and catchy tunes. People don’t want to share an article called “5 Reasons to Look Both Ways.” They do want to get the song “Dumb Ways to Die” stuck in their friends’ heads.

Best way to die: “Dress up like a moose during hunting season.”

Under Armour is usually associated with commercials filled with inspirational workout montages and dripping sweat. Pursuing a complete change of tone, the company partnered with Funny or Die to create a series of funny videos featuring New England Patriots quarterback Tom Brady. By joining forces with Funny or Die, Under Armour found a new way to reach their core demographic of millennial males.

Best quote: “You look like a reader, maybe I should help you. I take a Zumba class, maybe I can dance kick him.” 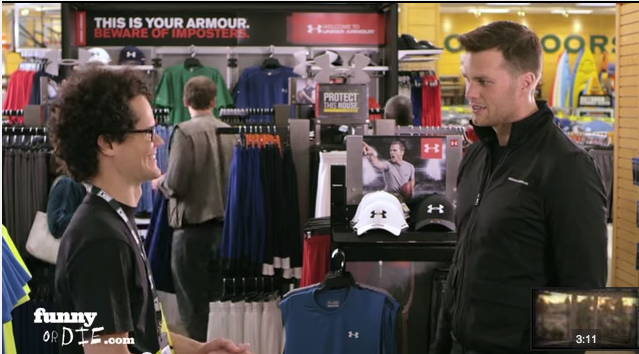 4. AT&T: “Shout Your Love From the Mountaintop”

AT&T decided to celebrate Valentine’s Day in a completely innovative way. The company hired a bunch of viking look-alikes, stuck them on the top of a mountain, and had them scream user-submitted love letters. (Romantic, right?) Quite literally, AT&T was helping people shout their love from the mountain tops. As mentioned in the video, the company’s Likes on Facebook rose by 10 percent in three days, due to the shareable and funny nature of the content.

AT&T “Shout Your Love from the Mountaintop” from impossibility on Vimeo.

The Fine Bros’ “Kids React” series was already hugely popular on YouTube before AMC decided to sponsor a video. The channel’s pre-existing fan base of eight million subscribers virtually guaranteed that “Kids React to Old Computers” would take off—and that it did. As of today, the video has over 10 million views. In addition, the clip is perfectly in line the narrative of Halt and Catch Fire, which centers around the 1980s computer revolution.

My personal favorite aspect of the video is that AMC doesn’t shove their brand down anyone’s throats. Instead, the only mention of the company is in the YouTube description box. After enjoying the funny video, curious viewers can click on the link and explore the show’s website for themselves.

Best quote: “You have to go to the library!” “Who wants to do that?”