If you want evidence that brands are still trying to figure out social content, look no further than Perrier’s new campaign—it’s ambitious, but it’s a head-scratcher, too.

According to a press release, the sparking water company is introducing consumers to its “bolder, quirkier side,” with District Perrier, a mobile party destination that’s “part fantasy, part reality,” and definitely confusing.

The District Perrier blog, hosted (and sponsored heavily) on Tumblr, aims to reach millennials with mixology videos, DJ playlists, and style and destination guides for cultural hotspots. Woven in between all of these posts are videos from Perrier’s weekly audio narrative series, “Tales From The District,” told by a man who finds himself under the spell of your District Perrier hostess, Perrier Madame.

Madame first introduces us to District Perrier through the “Secret Password” video, which has been live for a month on YouTube and hasn’t even hit 400 views. Off the bat, the video feels like a piece of content better suited for Instagram, which is the perfect place to post short clips and reach partygoers. This brings me to my main criticism: The District Perrier content experience is largely unintuitive for Tumblr users.

The brand is attempting to reach millennials by creating a digital environment of exclusivity, mystery, and risque good times. Tumblr might deliver on that whole underground setting, but it’s not necessarily known as the social network for partiers. Tumblr is more like the digital hole you disappear into when you’re settled in for a night of Netflix and leftovers. (Am I writing from experience? We’ll never know.)

If Perrier wanted to reach the nightlife crowd for this campaign, they would’ve been wiser to use Facebook or Instagram. People go on Facebook to plan parties, read reviews on local bars, and ask their friends about nighttime plans. And people go on Instagram to share party pics and (hash)tag their drink of choice. For example, Grey Goose teamed with R/GA to tap Instagram influencers for its popular Hotel Noir campaign of 2012. But District Perrier content is nowhere to be found on Perrier’s Instagram account.

In fact, the District Perrier campaign feels like a bit of a rip off of Hotel Noir, which focused on a fictional setting where fashion and music came together. But instead of creating a unique online culture, District Perrier gets lost in that blurred line between fiction and reality.

Blog posts include interviews with the District’s best burlesque ladies, bizarre posters for District shops, and custom graphics that attempt to complement the intrigue of the audio narrative series. But instead of immersing the user in the culture of District Perrier, the posts just feel flat and unnecessary. For example, the random horoscopes post would’ve been more shareable if it jumped on one of 2015’s biggest Tumblr memes involving horoscopes. Basically, Tumblr users would create a post with the title “The Signs As ____” and create different (often ridiculous) descriptions of how each zodiac sign would react in a certain scenario. For example, here’s “What The Signs Think About The Dress.” 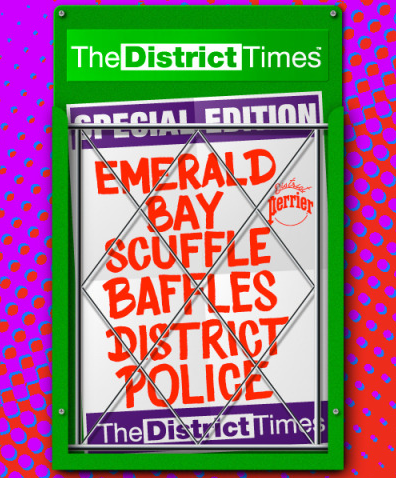 Compared to that Tumblr setup, Perrier’s campaign is just too difficult to digest and almost impossible to engage with. The company could’ve gone quirky like Friskies, weird like Old Spice, or cool like Grey Goose; instead, they’re trying to be all of those things at once. The resulting content doesn’t fit in naturally on the average Tumblr user’s dashboard.

Despite these missteps, there are a few aspects of the District Perrier campaign that suggest the brand could be moving in the right direction with its content marketing. For example, the mobile integration is on point. Perrier partnered with mobile apps Blippar and Ibotta to offer in-store savings and rewards programs and augmented reality features that allow consumers to experiment with the product.

The “District Tour” posts on the Tumblr also provide a glimmer of hope. Posts like “Bushwick Bars You Need to Visit ASAP” and “Chicago’s Intriguing Must-Visit Speakeasies” target readers by location, make for an interesting read, and provide consumers with helpful information that could lead them to their next great night out. Still, instead of being published on Tumblr, this content might be better suited for a Perrier blog hosted under the brand’s own domain name.

With GIFs, it seems Perrier is also making use of Tumblr’s new Creatr Network, which connects Tumblr-native artists with brand partners to produce sponsored content. While Perrier gets brownie points for experimenting with this new feature, the results of the experiments are still a bit confusing. (Are these supposed to be colorful burps? I honestly don’t know.)

Given that the average sponsored post on Tumblr gets 10,000 reblogs, Perrier’s content should be performing better than it is. Their sponsored posts hover around 6,000 interactions and most of their regular posts aren’t even exceeding 20 interactions.

We’ve come a long way since I published “What Brands Don’t Understand About Tumblr.” Brands like Lexus, Converse, and IBM are now running awesome campaigns on the micro-blogging platform. But evidently, some brands still have a great deal to learn about understanding what their consumers want and where they want it. It’s pretty clear that Tumblr users are much more interested in Katniss Everdeen’s Capital Couture, not a wild night out with Perrier Madame.