What Brands Don’t Understand About Tumblr

“If a picture paints a thousand words, then Tumblr is the greatest storytelling medium available in the social space,” Hypebeast wrote in late 2011 of the “trendy bastard child of WordPress and Twitter” that was leading the aesthetic movement of the digital world.

Over two years later, Tumblr has continued to grow—despite being oft-dismissed as a second-tier social network—and now boasts 164 million blogs and 72 billion posts. But while all of the top 100 global brands are on Facebook and Twitter, only 31 of them have staked out a presence on the Yahoo-owned micro-blogging platform.

With so many brands looking for exciting ways to tell their best stories, what gives? After all, the average sponsored post on Tumblr gets reblogged over 10,000 times, and users spend an average of over 14 minutes on the platform during each visit for a pretty simple reason: They want to see cool stuff. As Tumblr’s director of product, Danielle Strle, said at Social Data Week, “It’s a magic river of Internet awesome that you have made all for yourself.”

And there’s no reason so many brands should be missing out on making their own river of internet awesome.

One thing that’s so great about Tumblr as a social network is the freedom to play around with different types of content. You can create content based around text, photos, quotes, links, dialogue, audio clips, videos, and—of course—GIFs.

Tumblr users don’t take that freedom for granted, and neither should brands.

The Tumblr community has turned the platform into a unique ecosystem, complete with its own native dialects (hyperbolic language, pop-culture irony, loose grammar) and resources (reaction GIFs, witty Tumblr domains). For brands to succeed, they need to become familiar with the Tumblr tongue.

“Understanding the network and audience you’re marketing to is crucial no matter where you are, but even more so on Tumblr, which has managed to maintain an ‘underground appeal’ to a lot of niche markets,” explains Kevin Shively, senior marketing manager at Simply Measured, a Tumblr A-List Analytics Provider.

Dive into the underground and play around a bit. Take The Hunger Games film for example. While any good Hunger Games GIF can get up to 50,000 reblogs in mere hours, the film’s marketing team still experimented and took things to the next level, engaging fashion fanatics with its famous Capital Couture blog, which showcases attire from the fictional Capitol.

Also, talk in tags. Just like Twitter, Tumblr is organized by hashtags, some of which are curated by Tumblr staff, but most of which emerge and thrive wholly through user contribution.

For example: Beyoncé. While she doesn’t tag her own posts with “Beyoncé” (which I personally think is a mistake), her team created a system to organize her blog content internally by tagging each post with “My Life,” “My Work,” or whatever projects she’s working on. We’ll let that first part slide though. It’s Beyoncé, after all.

So—getting back to those niche markets—what kind of content gets traction on Tumblr? Think visual. Images, graphics, and, most famously, GIFs. It should come as no surprise, then, that fashion and entertainment brands tend to dominate the platform’s branded content.

“When your advertising and marketing collateral can be repurposed as social content on channels that users visit expecting something visually captivating, half your work is already done,” says Shively. He points to Tiffany & Co. and MTV as great examples of this, noting that photos account for over 98 percent of Tumblr engagement (and 95 percent of brand posts).

Basically, become the leader of your brand’s fandom. Make it impossible for consumers to scroll past your post without reblogging. And don’t be afraid to give your audience power. Are they awesome at making GIFs? Start a contest and reblog the best fan work. Invite them to repurpose your content and make it their own by adding their own story, tags, or reaction GIFs. 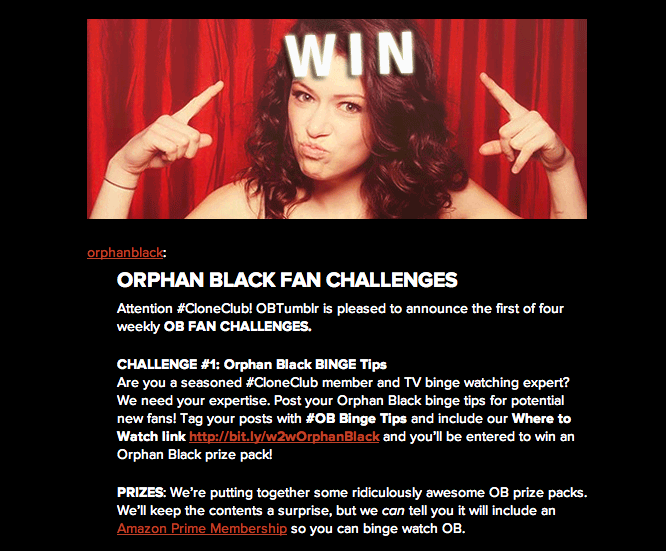 “There are all sorts of Tumblr blogs, and to stand out among them, a brand needs to be aggressive and push the envelope in a fun way,” says Shively. “At the same time, I think it can be easy to get caught up in the culture (or counterculture) of an ecosystem like that, and it’s important to stay on brand message to some extent. It’s a fine line that you need to walk as a brand marketer.”

“The most compelling stat to me is that Tumblr posts have a level of longevity that you simply don’t find on other networks,” Shively says. “This should be appealing to any company spending time on their social content.” 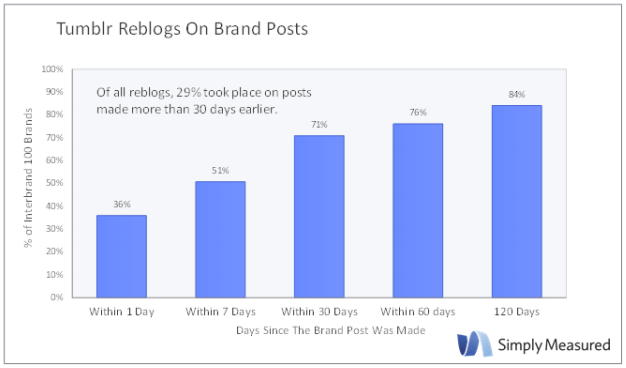 According to Simply Measured’s analytics, of all Tumblr reblogs, 29 percent were from posts that were at least 30 days old. Compare that to Twitter, where tweets more than a couple hours old are often lost in the social media ether, never to be seen again.

During her talk, Strle cited an American Apparel post that hit Tumblr in January 2012 and picked up over 2,000 reblogs a year later in January 2013. It’s still being reblogged today. 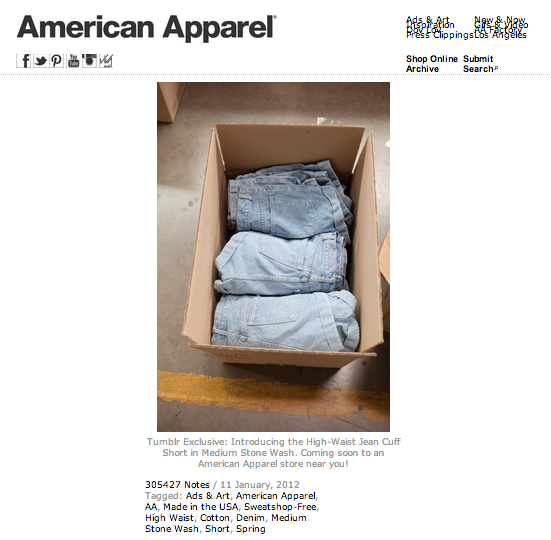 Let Tumblr teach you how to Tumblr

In Spring 2012, Karp launched a huge brand outreach program, hiring brand strategists to help companies find their footing on Tumblr. Naturally, the Tumblr Sales and Brand Strategy team also has its own Tumblr hub: Marketr. For more information, brands can head to Tumblr’s Business page or Brands blog, which offers tips for brands starting out. 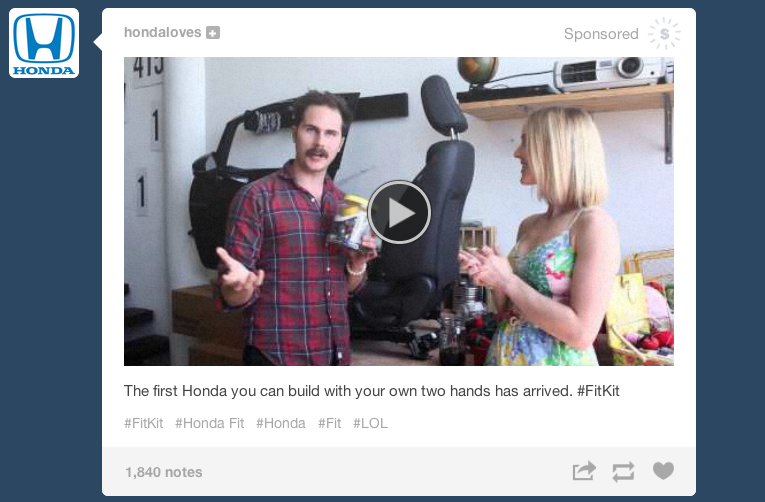 And just this year, Tumblr launched a sponsored posts program, powered by Yahoo Advertising. While Tumblr is free for anyone to use, brands with some cash to burn can pay for their content to be featured as Spotlight posts, which slip right into Tumblr users’ feeds, or Radar posts, which are editors’ picks that are featured on the right side of the Tumblr dashboard. Together, these two spots generate more than 120 million impressions each day, according to Forbes.

Earlier this month, Apple did something unprecedented: They used social media. Guess where they went first? Tumblr. Their new I See 5c blog was created to promote their youth-oriented 5c iPhones. Guess how they’re doing it? With eye-catching visuals.

“Apple doesn’t make decisions on a whim. They research like crazy, and choosing Tumblr was a strategic choice,” Shively says. “It’s ‘cool’ and not viewed by their customers as mainstream. I’d expect to see this trend continue with other brands looking to maintain a youthful image and audience.”

Brands as varied as General Electric, Coca-Cola, and Random House are finding innovative ways to make Tumblr fun for consumers. Lexus launched their Send Them A Signal blog, which challenges people to answer, “How do you make a statement without saying a word?” And Fancy Feast created CheeseAffair.com through Tumblr, because you can’t go wrong with cats and cheese.

“Tumblr is still pushing the network as a ‘storytelling’ platform, and uses words like ‘beautiful’ whenever they talk about the potential for rich content,” Shively says. “Tumblr wants to stay unique, and it wants brands to view the opportunity the same way.”

The sky’s the limit, brands. To infinity and Beyoncé!