Native advertising is a hot topic in the marketing world, and now, the money is starting to follow.

One of the major players in the space, content recommendation service Taboola, announced Wednesday that it has raised a $117 million in a Series E funding round. The company is planning to use the investment to build out its personalization suite and further develop its mobile technology.

The round was by led by Fidelity Management and Research Company, and also includes strategic investments from LVMH controlling shareholder Groupe Arnault and Condé Nast parent company Advance Publications.

The inclusion of a luxury retailer and a major media company is significant—it demonstrates that both brands and publishers are beginning to understand the heightened importance of content recommendation in the age of the social web.

“Our vision is to build a new category called ‘Discovery,’ and we think a lot of it is going to be driven by technology,” Taboola founder and CEO Adam Singolda said. “It’s important for us to continue to invest in the foundation of our company.”

The round comes at a pivotal time for Taboola and other content recommendation companies, who are hoping to capitalize on the native advertising explosion even as they face increased competition from publishers and social networks looking to get in on the take.

For those unfamiliar, the company is best known for its nearly ubiquitous content-recommendation widget, which sits at the bottom of stories on sites like Business Insider and Politico. The widget displays links to editorial and sponsored content “from the web.” 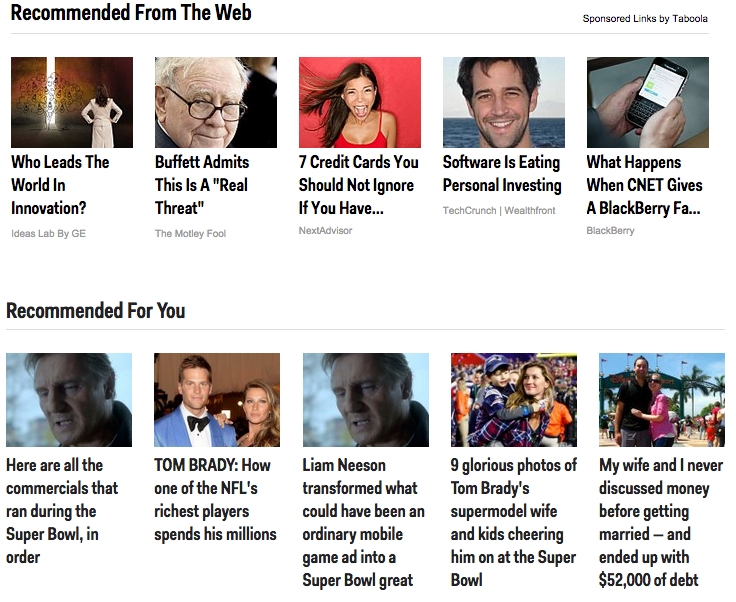 When Taboola first launched in 2007 as a video recommendation platform, the company and its blood rival, Outbrain, were two of the only services brands could use to distribute their content without resorting to disruptive banner ads, Digitas’ head of social content, George Hammer, said. But as social platforms like Facebook, Twitter, Pinterest, and LinkedIn have rolled out robust advertising options for distributing content on the social web, the competition has heated up.

“Taboola and Outbrain are good at driving a lot of traffic at a low cost per click,” Hammer said. “But if you’re really looking to drive shares and deep engagement with your content, sometimes the social native platforms can be better.”

Outbrain and Taboola also face challenges from major companies like Yahoo, AOL, and Google, each of whom developed, acquired, or were reported to be working on a content recommendation platform in 2014.

Crucially, each of these companies owns other services that require people to log in, meaning that they can target content recommendations to people based on their individual profiles rather than the cookie-based browsing history Taboola uses.

The overall market for sponsored content is growing so fast that Hammer believes Taboola will prosper regardless of how much money its competitors make, but he adds that the company will be better served in the long run if it can figure out how to make more personalized recommendations.

“Agencies are looking to harvest the power of profiles and move away from cookies and things that don’t allow marketers to speak one-to-one to people,” Hammer said. “I think that is one of the big benefits right now that platforms like Facebook and LinkedIn have, and I think that the Outbrains and Taboolas of the world are trying to figure out their answer to that.”

Though Singolda, the Taboola founder and CEO, did not mention profile-based targeting when we spoke with him, he did say that the company will use some of its recently acquired capital to improve its personalization technology.

In his mind, Taboola has an opportunity to help publishers optimize the layout of their webpages based on a user’s history. For instance, a visitor who is a heavy Twitter user would see an article with a larger share button, while someone who likes video would have one featured more prominently in the story.

Singolda says publishers can already A/B test headlines as they appear on their sites, and users can reject stories that are not relevant to their interests in a fashion similar to Facebook’s block button.

In addition, he says the influx of capital will allow the company to continue expanding globally (the round includes an investment from the chairman of the Italian media conglomerate Gruppo Espresso) and to further invest in its mobile technology—an especially important priority given that half of Taboola’s 200 billion monthly content recommendations are now served to smartphones and tablets.

And, like everyone else in the content marketing game, Taboola will be investing in stronger measurement to prove to its customers that it is giving them the most bang for their buck.

“Our responsibility is to work with marketers on learning best practices and finding ROIs,” Singdola said. “The future of content recommendation lies in marketers finding tangible reasons to do it forever.”