Ignoring display ads is one skill we’re all astoundingly good at. Millennials, in particular, have it down to a T.

These superpowers don’t always work. We’ve all experienced horrible display ads that relentlessly flash bright red, generate obnoxious noises in one of 18 open tabs, or jiggle around violently like they’re trying to escape from your computer. Even if they generate more clicks, in the end these methods, more often than not, will damage a brand’s reputation.

But there may be hope for the despised rectangles. Brands are beginning to explore a new tool that would grab the attention of users, but by subtler means: 3D display ads.  The hope is that we won’t hate them—an ambitious goal if there ever was one.

Before you roll your eyes and dismiss the idea, take note: publishers are intrigued reports ​Cxense. According to a survey conducted by the global software company, seventy-seven percent of publisher executives expressed interest in 3D advertisements as long as they don’t bug consumers.

The new kind of display ad

A couple of weeks ago, Cxense’s Lauren Pedersen, VP of global marketing, and Jan Helge Sagflåt, VP of product management, showed off their nifty 3D display ads at a demo in Midtown Manhattan.

Sagflåt scrolled down a website on a big screen at the front of the room. Suddenly, it looked like we were passing over a real yellow sneaker. Like experiencing a 3D movie for the first time, it took a couple seconds to get used to. The coolest part, arguably, is that I didn’t need to wear ridiculous goggles for the experience. Regardless of where I sat in the room, the yellow sneaker still popped out from the screen. 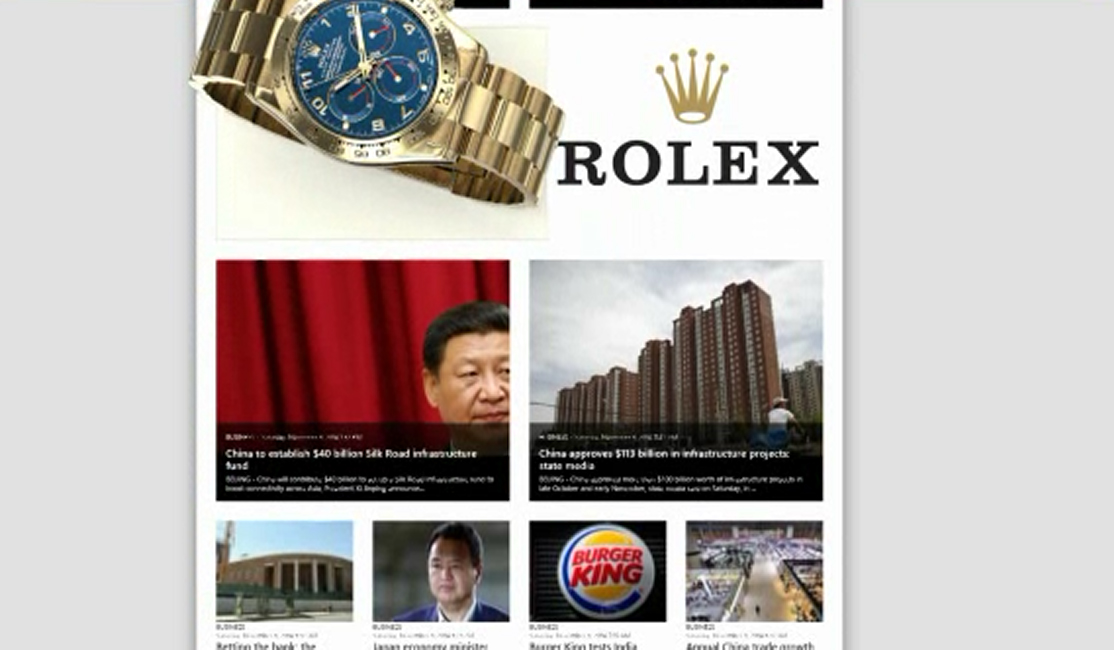 The images can be designed in any number of 3D programs, Sagflåt explained. Once designed, they collect a ream of “subimages” of the 3D image at slightly different angles, and then gather them into a roll. He zipped through hundreds of snapshots of a yellow sneaker. Compiled, these images make up the 3D shoe. “It reacts to scrolling,” Sagflåt said. With every pixel that you move up or down, the shoe changes angles slightly. Because of the mechanical connection to scrolling, it’s difficult to understand how it works without scrolling through an example yourself.

In Pedersen’s eyes, these 3D displays provide the kind of real world depth that’s missing from display ads and e-commerce sites. “It’s like you can reach out and touch it,” she told me, holding her hands in a cup. Cruising around the otherwise 2D Internet, it’s definitely an eye-catching anomaly.

Maybe that’s why other companies are exploring the idea. Earlier this year, State Farm and Liberty Mutual rolled out GIF-like advertisements designed by startup Adnimation. In one five-second clip, an airplane zips around a skyscraper in the background and shapeshifts into the front on a whiter space.

While very different, both Cxense’s and Admination’s display ads rely on the same key technique: occlusion. Shapes overlap other shapes to trick the eye into seeing depth; as a result, it seems like the images are jumping from the screen.

Which is better? It all comes down taste and the use case. Cxense is good if you want just one unique object to pop off the screen. But Adnimation GIFs give marketers the ability to tell a short narrative, which has significant storytelling potential.

What if it’s not such a good idea?

How many times have we heard that 3D will transform media forever? While the promises for the new technology were grand, so far it’s been a colossal failure. BuzzFeed called this year’s Consumer Electronics Show “a funeral for 3D.” Many companies that touted its potential in 2013, like Vizio and Panasonic, have ditched many of their 3D sets, or at least the promotion of them.

To make matters worse, 3D movies saw a decline of 18 percent in revenue at the box office in 2012. While some of us occasionally buy tickets to 3D movies, it hasn’t yet turned out to be the ubiquitous entertainment experience, to say the least.

“It will be in the best interests of publishers, advertisers, and users that this new format is embraced without interrupting the user experience.”

But Pedersen thinks that the ease of use carry Cxense’s project forward, potentially to widespread use. It’s not open source though. The company will offer it in an integrated software-as-a-service suite. But no plug-ins or software are required to get it rolling. Brands don’t have to worry that users will have trouble viewing the images. It’s designed with “normal HTML,” according to a company press release.

It’s easy to dream up nightmare scenarios for the technology. Despite the insistence on subtlety, 3D tools could be abused by clueless marketers. There are some appalling display ads out there, like the one featuring a scrawny spider that you’re supposed to “stomp” on to earn a free iPod. A 3D version would be significantly worse.

I mentioned the potential for abuse to Pedersen, she answered that brands will only benefit if they use them with care. “It will be in the best interests of publishers, advertisers, and users that this new format is embraced without interrupting the user experience,” she noted.

Is innovation the key to more clicks?

Let’s get back to the state of display ads for a minute. John Oliver blasted them over the summer: “One study found we only intentionally click on display ads less than two-tenths of 1 percent of the time,” he said. “Which actually sounds about right. Because did you know that if you ever actually click on a display ad, you literally get taken to a page that reads, ‘Hey, is everything OK? I’m presuming you passed out and hit your head on the keyboard. I’m calling an ambulance right now.’”

Even Yahoo, the “godfather” of display ads, ditched them earlier this year. But while display ads may be ineffective and losing favor, they certainly aren’t dead, as many concluded in 2012. Even while brands are gravitating to native advertisements, the rectangles are everywhere. 5.3 trillion display ads were served up to U.S. users in 2012 alone, according to comScore.

Marketing gurus have talked of polishing them up with innovation for years, but there’s been no noticeable change. It’s not clear whether innovation is a lost cause, or the solution simply hasn’t been developed yet.

Whether or not it’s really the killer app to turn around miserable click rates, Cxense’s tool is definitely innovative, and provides some serious novelty. (I even spent a little time zooming up and down at varying speeds, in failed attempts to fake it out.) If companies deploy them, not even millennials will be able ignore the display ads anymore. But will they enjoy them?