6 Brands That Used Tinder as a Social Media Marketing Platform

Tinder is usually reserved for late night booty calls and awkward conversations with winky faces, but what about social justice campaigns? Recently, advertising agency Eighty Twenty used the app to do the unexpected: help bring the issue of sex trafficking to light.

The project was created in collaboration with The Immigration Council of Ireland to raise awareness of the fact that, at any given time, 2.4 million people around the world are victims of human trafficking. Users swipe through a series of images of a woman as she becomes progressively more bruised. Afterwards, messages will appear such as “Your options are left or right. Women forced into prostitution in Ireland have none.”

It’s a powerful campaign, and its clever twist on Tinder’s main functionality—swipe right, swipe left—brings its message even closer to home.

Not surprisingly, multiple companies have found similarly creative ways to use this infamous dating app as a way to grab the attention of people who might otherwise be unaware of their brand or cause. Here are a few quick examples of businesses using Tinder for something other than hooking up:

I would definitely use Tinder more often if I could replace all of the frat bros with cute puppies. Luckily, that’s exactly what Social Tees Animal Rescue and the interns at ad agency Bartle Bogle Hegarty decided to do.

Tinder users in New York City got a happy surprise when they saw that they could match with an adorable golden retriever or black lab that needed a home. After exchanging a few texts with a pup that has caught your fancy, you have the option of meeting up with the dog for a walk to help decide if you want to take the relationship to the next level via adoption. Amazingly, over 1,500 matches were made within the first hour of the project.

But what happens if you swipe left? The puppy gets a sad, red “Abandoned” label slapped over its picture. If that doesn’t increase adoption rates, I don’t know what will.

Much like the Immigration Council of Ireland, Amnesty International Australia used Tinder to raise awareness for an important issue—in this case, forced marriages. Creative agency Circul8 paired with the nonprofit to create this campaign, which was launched on International Women’s Day.

To begin, Tinder users were encouraged to change their profile picture to the Amnesty International logo. The company was also prioritized by Tinder, meaning their promotion would show up on more users’ screens. Once logged in, people were shown images like this one: 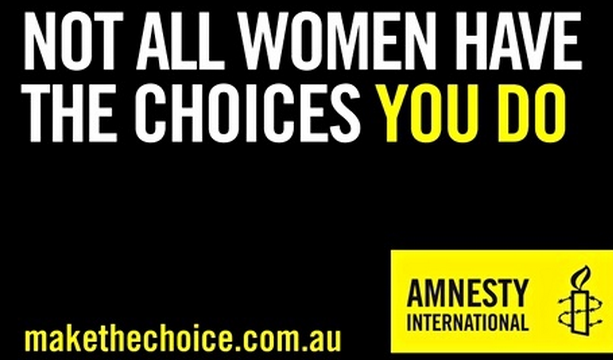 At first it may seem strange to advertise such a serious issue on a lighthearted app like Tinder. However, Caroline Easter, supporter acquisition manager at Amnesty International, felt that the campaign was worth the risk. “Taking the chance was about generating new leads, getting users to share our messages and creating a buzz around our work on women’s rights,” Easter said in an article for The Guardian.

At the end of the day, the Tinder campaign was extremely effective. Amnesty International had thousands more click-throughs to their website than usual, and hundreds of people signed up to become members.

Domino’s knows that only pizza can soothe the pain of being single on Valentine’s Day. As a result, they decided to give away free pizza and discounts to Tinder users who matched with them on February 14th. 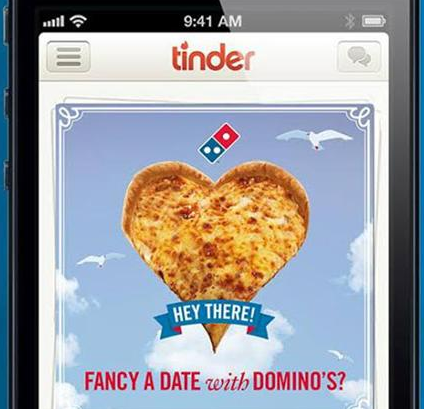 According to Iris Worldwide, the campaign had a social reach of over 230,000 people. While that random guy from Tinder may have stood you up at the bar, pizza will always be there for you.

People who watch the USA’s hit show Suits typically fall within the same age range of Tinder users—18 through 49. It only made sense that the two ended up pairing up for the dating app’s first network promotion. 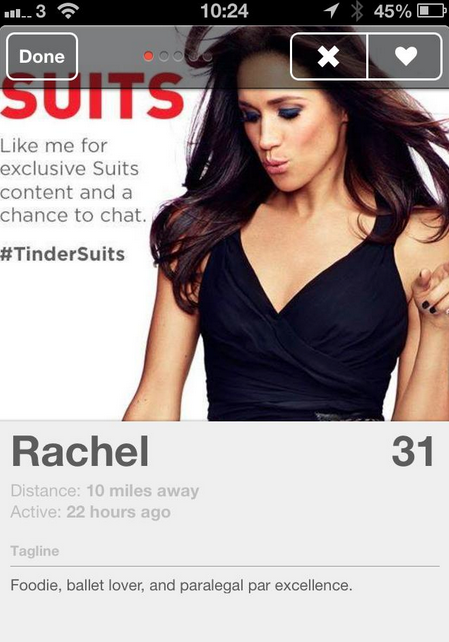 After swiping through a few people in their area, Tinder users had the opportunity to match with character’s Harvey Specter or Rachel Zane, depending on their sexual preference.

“The most important thing is that we’re exposing the show to people who aren’t aware of it,” said USA’s Executive VP of Marketing and Digital, Alexandra Shapiro in a Variety article. In reality, the network had nothing to lose. The experimental promotion was free for the network since Suits was a favorite show of two of Tinder’s top execs—Justin Mateen and Sean Rad, both of whom have since resigned.

After USA got so much press with their Tinder stunt, NBC decided to follow suit (get it? Suits?). Soon the main characters of NBC’s The Mindy Project, Mindy Lahiri and Danny Castellano, were potential matches for Tinder users. 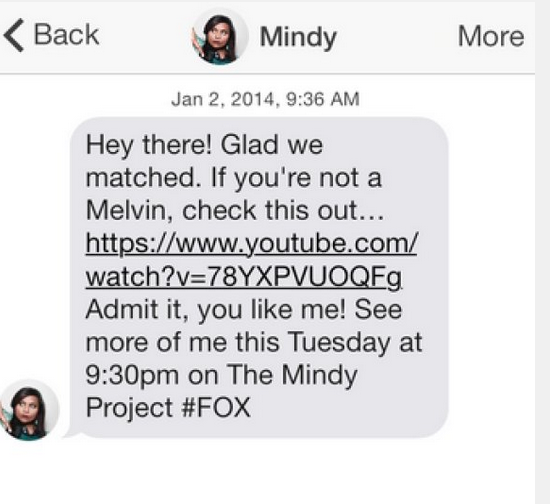 It remains to be seen how comfortable Tinder users are being matched with companies instead of real people. For now, however, brands trying to reach millenials would be smart to jump on the bandwagon by taking advantage of Tinder’s unique functionality and purpose.

In fact, dating apps like Tinder are the perfect form of social media to target not just millenials, but the particularly elusive 18-34 year-old man. As for me? I’m just happy that I can be paired with a puppy instead of a guy who wants pictures of my feet.