David vs. Goliaths: How Maplewood Online Beat AOL and the ‘Times’ for Hyperlocal Dominance

Most battles start with a single shot, but this one started with two.

In the Hyperlocal Content Wars of 2009, two successive rounds were fired in my town of Maplewood, N.J., when Tim Armstrong’s Patch.com and The New York Times Local both set their sights on our village.

As a laboratory for experiments in scalable, community-focused news, Maplewood made perfect sense. It’s a lively village of some 20,000 citizens with a healthy mix of tech- and culture-savvy professionals, retail establishments, and civic spirit. Plus, it’s just across the Hudson from New York, home to Patch Media and the Times.

Patch and the Local made their Maplewood debuts in February and March 2009, less than a month before Armstrong was named CEO of AOL, which would soon acquire Patch Media in June. That put Maplewood in the crosshairs of two media giants… And it spelled big trouble for homegrown media properties like Maplewood Online.

Founded in 1997, Maplewood Online looked exactly like it did when we arrived in town in 2001. It featured small display ads and a no-frills directory of local businesses, a classifieds section, photo galleries of events like the business district’s annual Halloween party, and an old-school message board where local curmudgeons argued over everything and anything, from property taxes and lawn signs to restaurants and presidential politics. 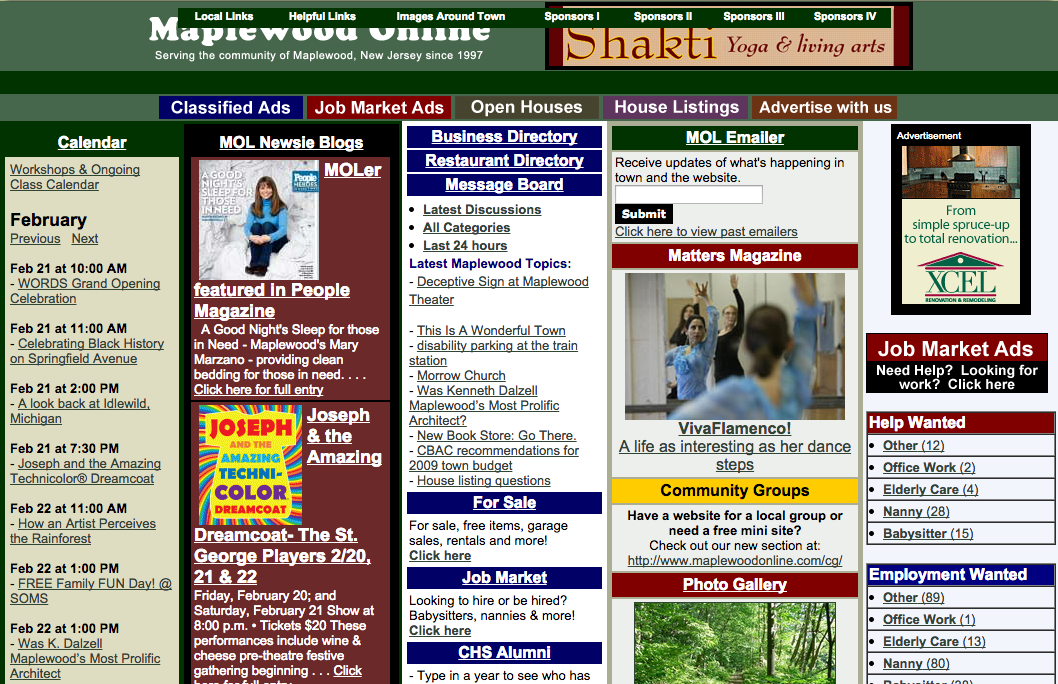 Surely, a digital antique like Maplewood Online couldn’t withstand the onslaught of two media titans with elaborate plans for hyperlocal advertising and news coverage… Right? What did Maplewood Online have to offer to local reports and readers that Patch and the Times couldn’t match?

Patch paid its writers; in lieu of pay, the Local gave its writers Times business cards, which burnished their resumes and opened doors for opportunities in their primary professions.(Disclosure: My spouse, an artist, was a regular contributor to the Local’s arts section, and the power of the Times name gave her access to some of the biggest names in the art world.) What did Maplewood Online provide contributors? Neither money nor recognition—just the opportunity to engage with other members of the community on a long-established message board with a deep history discussing local issues.

Despite their funding and reach, however, the new hyperlocal experiments quickly went sideways. While both the Times Local and Patch turned out an impressive volume of locally-focused stories, neither achieved the same volume of reader participation as the Maplewood Online message boards.

The Local’s news edge was blunted by an editorial workflow that required contributors to file stories as email attachments instead of directly onto the Times‘ platform. It also never expanded beyond its initial beachheads in the Maplewood area and Brooklyn, and before long, it cut the editorial staff that was curating submissions from local reporters. By late June 2010, the Local had officially closed up shop.

Under AOL, Patch expanded to cities across the U.S. before Armstrong laid off 300 to 400 staffers in August 2014 and sold the remains in January to an investment firm, Hale Global. Hale promptly laid off another 400-plus Patch employees and turned the majority of the 1,000 local Patch editions into “zombie sites” without dedicated staff, auto-populated with stories that cover wide geographical territories.

By contrast, Maplewood Online kept chugging along on the strength of its local advertising base and its indefatigable source of user-generated content. Unlike the elaborate infrastructure and workflows that characterized Patch and the Local, Maplewood Online has always primarily been a one-man operation—founder Jamie Ross, a lifelong Maplewood resident who has leveraged his local business connections to build a loyal advertiser base ever since he launched the site in 1997.

“Back then, I’d go to every business in town with little flyer for a banner-ad package,” Ross said. “I’ve grown up here, I knew a lot of the business people, and they were ready to trust me with some business.”

Those ad offerings include display ads, classifieds, and job listings, and Ross also does some Web hosting and site development on the side, and he’s been content to keep Maplewood Online a small, local operation. “I have one buddy who works for me to handle the day to day,” he explained.

Still, the length of Patch’s runway did give Ross pause. “Here’s a company that doesn’t have to make any money for years,” he explained, “so they have free rein to do whatever they want.”

Yet, despite those resources, Patch couldn’t succeed in the same way as Maplewood Online, and neither could the Times. The reason? Home-grown, organic user engagement.

While some of Maplewood Online’s message-board users go back to the launch of Maplewood Online 17 years ago, those boards got a big boost in 2000, when a controversy over a huge property-tax increase erupted. Many of those users joined to argue taxes and stayed to argue about everything else.

Even though the big guys hired away some of Maplewood Online’s most prolific contributors, those writers continued to return to the message boards of Maplewood Online to discuss the latest happenings in town. “People wrote for the Patch for money and the Local for exposure,” Ross said. For conversation with other locals, they stuck to Maplewood Online.

“Our traffic stayed pretty steady when Patch and the Local came,” Ross said. “People still needed that discussion, and they still couldn’t get live, immediate feedback from those sites.”

Today, Maplewood Online is still going strong. The site still looks pretty much the same as it did in 2009 and 2001, and it still relies on the same revenue streams and audience. 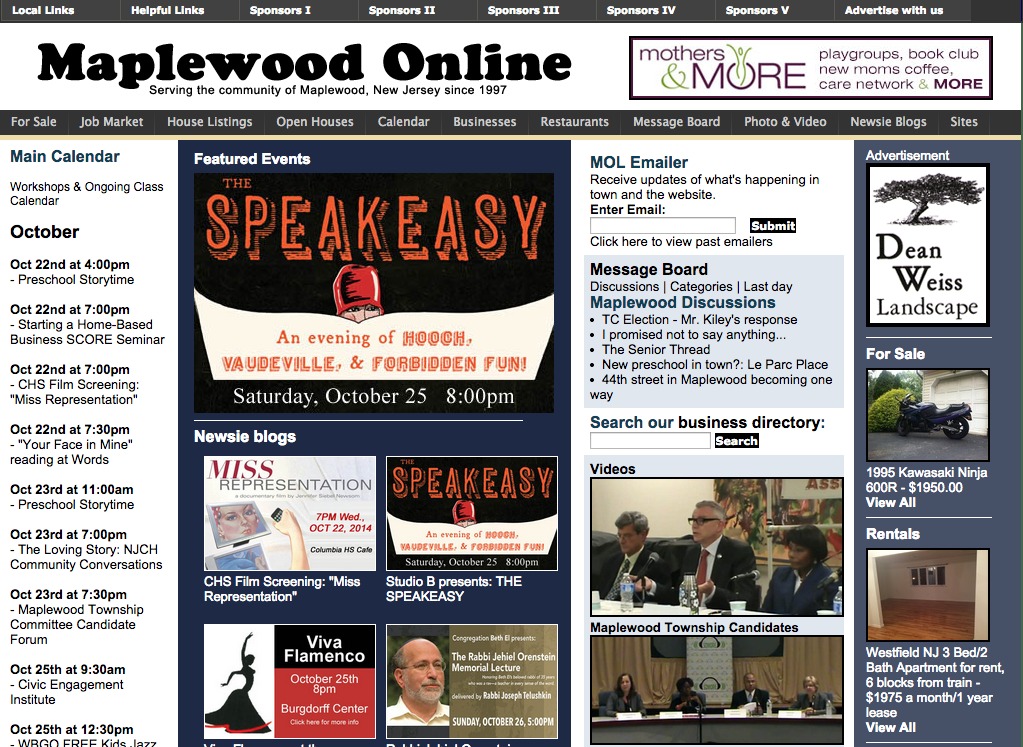 Ross said he’s confident that local control of local online content businesses is the winning formula. In fact, for the past year and a half, Ross said, he’s been working with a developer to create a new platform for Maplewood Online that he can also sell to other sites.

“The end goal would be to roll out the platform to people who want it,” he said. “The difference is, local people will be the owners.”