Somewhere within the infinite pages of Medium’s branded content lies the article collection Re:form. Above the digital fold, there’s a revisited 1996 essay on “calm technology.” Just below, there’s a pixel-happy,  turned comic strip about smartphone lust, and an article on white noise and “vanishing” soundscapes.

Re:form is a “field guide to the designed world,” a publication within a publication. But this particular field guide has a corporate benefactor: BMW. Re:form, as displayed prominently on the top of the page and at the bottom of each story, is “presented by” the German luxury car company. Edited by Sarah C. Rich, Re:form is the first of Medium’s ventures into the world of branded content—and, for that matter, into the world of making money.

I talked to Edward Lichty, Medium’s corporate development and strategy lead, about Re:form, the company’s branded content experiment, the interesting way they’re selling sponsored content (engaged time, not pageviews!), and what Medium has planned for the future of its creative services team.

How did the Re:form collection come about?

We put together several kind of publishing efforts around various topics, like military, technology and intelligence, sports; we have one on personal stories, we have a political cartoon selection. In doing so, we thought, “Wouldn’t it be interesting to partner with a brand to create a publication on Medium that would be interesting to Medium’s audience?” There’s a lot of writing on Medium already on design, and the general topic of design was a a good idea to launch a publication on. In thinking about brands that have design as a core value, BMW came to mind. We talked to them and came up with the program.

So was Re:form originally thought of by Medium, and then pitched to BMW?

Kind of. We’ve been in discussion with a variety of brands about doing things together. We’d been thinking about doing a design publication. When we started a dialogue with BMW, we kicked around several ideas about possible topics, and design was a topic we both thought was a good match for them as a brand and for Medium and the Medium audience.

What does “presented by” mean for Medium? What’s the relationship between BMW and the content that comes on the page? Does BMW influence the subjects, the content? What level of independence is there?

The whole publication is presented by them. Think about it as a publication that’s very much a partnership between BMW and Medium. The way we work on an editorial basis, we conceived of the general concept, we talked through them at a high level about ideas we want to publish. They provide some input. It’s very collaborative. They’re not doing a final read on every story, but we kind of [have] a pretty tight agreement on the general creative direction and voice for the publication. In terms of the relationship, we present their brand on every story. They have full rights to use that content if they want to use it off-site, so they can republish anything in Re:form they want outside of Medium. And about once a month, approximately, we will do a story that’s much more directly about BMW.

What do stories about BMW look like, as opposed to the rest in Re:form?

We’re going to be doing one coming out in September. I’m not going to specify what it is yet, but we have several ideas. BMW is doing many interesting things, and we want to help them publish stories, so that’s what we’re going to do. We don’t have them all mapped out yet, and I’m not going to talk about specific stories before they run, but it’ll be stories that we think will be interesting that will be consistent with the voice of Re:form. It’ll be very clear that they’re being published by BMW. It’ll be published under the BMW profile under Medium, working with our editorial team. 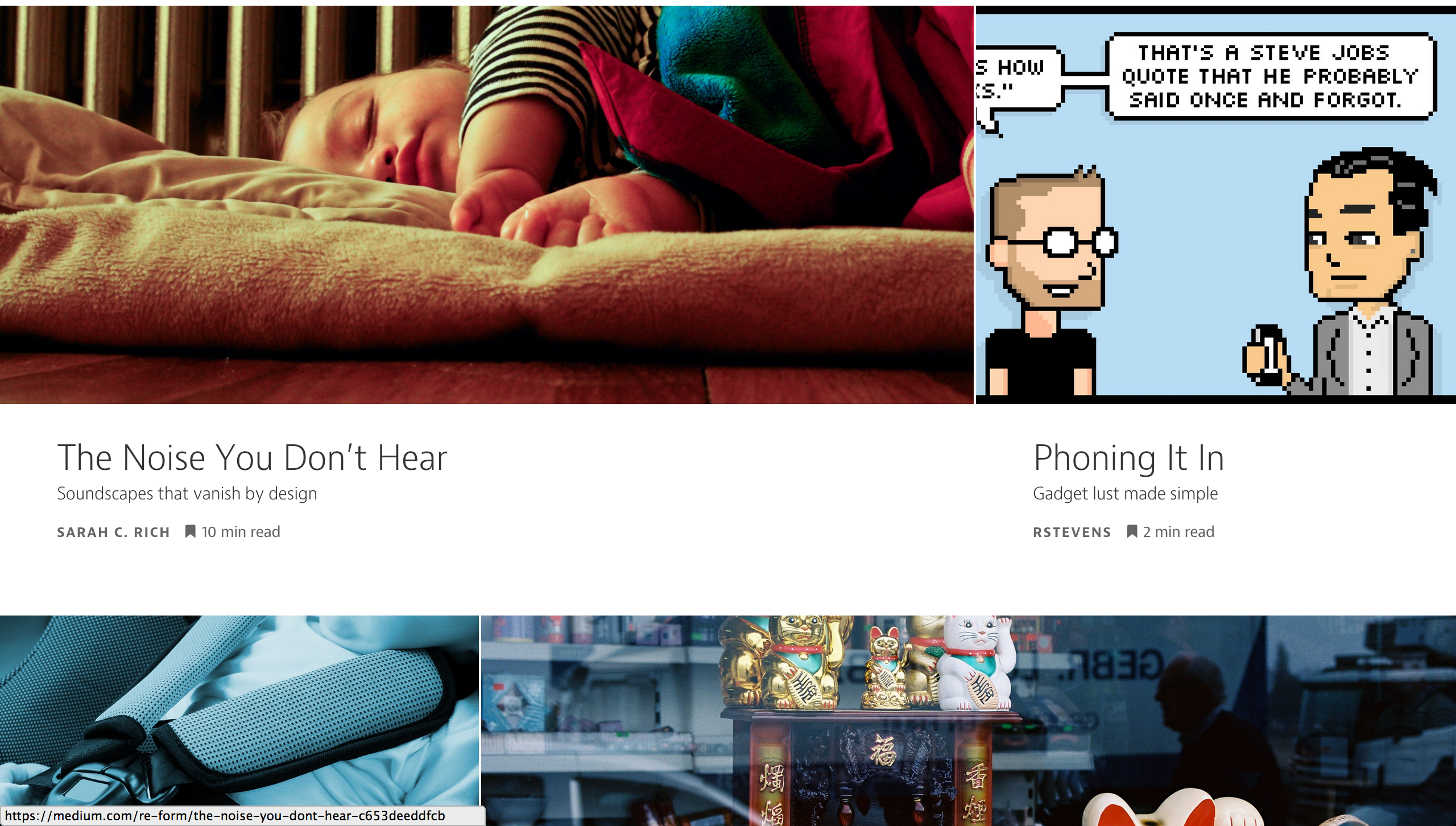 Who picks the writers for Re:form?

We put together the team. In this case, we contracted with Sarah Rich to be the editor-in-chief. She’s working on a contract basis, and we work with freelance writers on the individual stories.

This was the first attempt by Medium to generate revenue, yes? What does Medium have planned for the future? More sponsored collections?

It is the first. This is the first [sponsored collection], so mostly we’re focused on actually doing well on this. I do think there is opportunity to do more things like Re:form. We’ll look at doing more of those. And we’re in a dialogue with a variety of brands on variations of this, but I think right now we’re trying to understand how to do this well and to see what it means for Medium readers and understand the value this delivers to the brand. I’m sure over the full span of times, there will be a full revenue plan.

How have the Re:form stories performed so far, in comparison to Medium’s non-sponsored content?

I can’t give you specific numbers—that’s confidential—but it’s greatly exceeding what we had planned with them. The whole thing is constructed around time that people spend reading the story, so in terms of the deal—how we think of it with BMW—we contracted to do a project for six months, and we provided them a minimum level of traffic, and traffic we measure with time spent reading rather than pageviews or anything like that. We can measure exactly how long someone spends reading a story. We measure that in aggregate, and we guaranteed them a minimum level of engagement, and right now it’s outpacing that minimum level quite a bit.

One thing that’s interesting, from a business standpoint, is the way this whole thing was priced. We have a guaranteed number of minutes. It’s not the way things have been typically been done, but for us it’s creating the currency we think is really valuable for a client, which is engagement.

Medium also posted a job listing for managing editor of creative services. Is this connected to your sponsored content? What role will that editor play in trying to bring around revenue streams for the site?

How large does Medium expect its creative services team to be?

It’s impossible to know. We’re going to build a small core initially of full-time people and flesh it out with freelance talent, have a flexible model to start and just see what the demand is. We can scale it to be as big as it can be, but we’re starting pretty small with a core team, augmenting it with freelance talent, and seeing what the need is.

Why Comedy Central Is Replacing Commercials With Branded Content