Upworthy’s Sponsored Posts Are Crushing Their Regular Editorial. Here’s Why.

Despite being derided as a clickbait shop, Upworthy has actually never monetized those clicks through display advertising, and only started making money a few months ago when they launched their sponsored content offering, dubbed “Upworthy Collaborations.” So far, reports Upworthy, these posts are getting three and a half times the shares, three times the views, and three times the “attention minutes”—Upworthy’s measurement of the amount of time people spend actively consuming content—as their regular editorial. 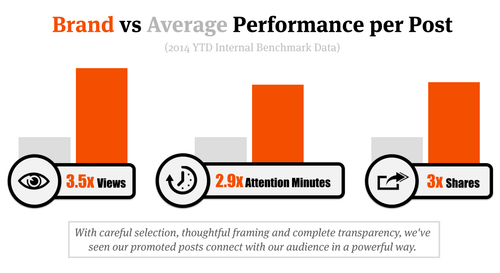 Considering that we published (and I wrote) a big report last week about how most readers don’t trust sponsored content, you might expect me to be skeptical of these results, but for the most part, I’m not.

Don’t get me wrong: Upworthy’s sponsored content isn’t getting triple the engagement because people just love brands so darn much. It’s because Upworthy is an expert at using paid social distribution to make a post catch fire on Facebook and Twitter (particularly Facebook). And they’re almost certainly putting a lot of paid social promotion behind their brand-sponsored posts. It’s what I like to call the NBA-Jamification of content. (“He’s on fire!”)

The result? Branded content on Upworthy is receiving 64 times more social actions than the average post across the top 25 media sites. 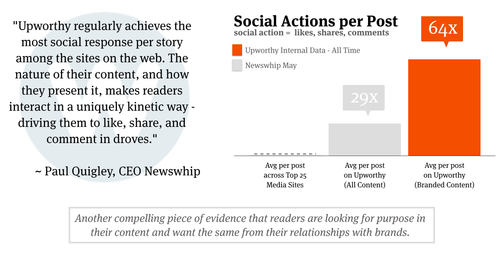 And people aren’t just clicking and sharing Upworthy’s sponsored content; they’re also spending time on it, which is the true measure of branded content success.

Since Upworthy’s sponsored content is racking up 2.9 times the attention minutes of its regular editorial on 3.5 times the views, we can calculate that people are spending 82.8 percent as much time with Upworthy’s brand-sponsored posts as their regular editorial. That’s pretty impressive, even though we don’t know much about how many attention minutes the average visitor spends with Upworthy content. And it’s a much more positive outlook than Chartbeat’s recent revelation that most people aren’t scrolling once they land on a sponsored post. 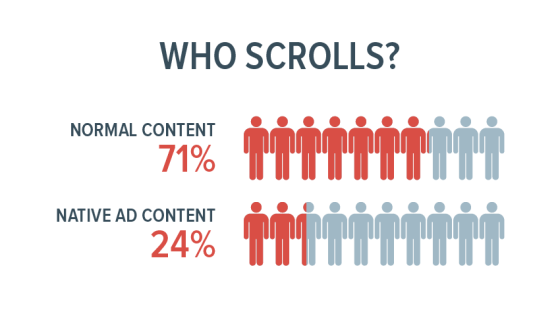 Why are readers engaging at such high rates with Upworthy’s sponsored content?

For starters, Upworthy is a great fit for sponsored content—the editorial formula largely involves pairing inspiring videos with 50–200 words of text, and many of those videos come from non-profits or brands like Dove that have become content marketing kings by creating content that makes people feel good. So if you’re Upworthy, why not charge those non-profits and brands for help spreading videos that you’d likely end up posting about anyway, like “Ellen, Katy Perry, And A Hockey Player Walk Into An Ad And Shatter A Ridiculous Argument“?

And for brands, it’s a relative no-brainer to pay Upworthy for guaranteed coverage and access to the Upworthy social-promotion machine, which spits out shares and marketing ROI like a broken ATM.

But are they being transparent about all of this?

In their blog post, Upworthy wrote that “the key has actually been twofold: We try to be very thoughtful in the kinds of campaigns we’ll work with, and we’ve taken pains to be radically transparent with our community when content is connected with a paid campaign.”

The “radical transparency” around their promoted posts is debatable—which is great for me because the transparency standards of sponsored content is something that the media industry loves to debate. For the most part, Upworthy is more transparent than many publishers. For example, the promoted post below for Unilever’s Project Sunlight includes a yellow call-out at the top of the page, a distinctly sparser page layout, and a line of text in the traditional “dek” area below the headline. 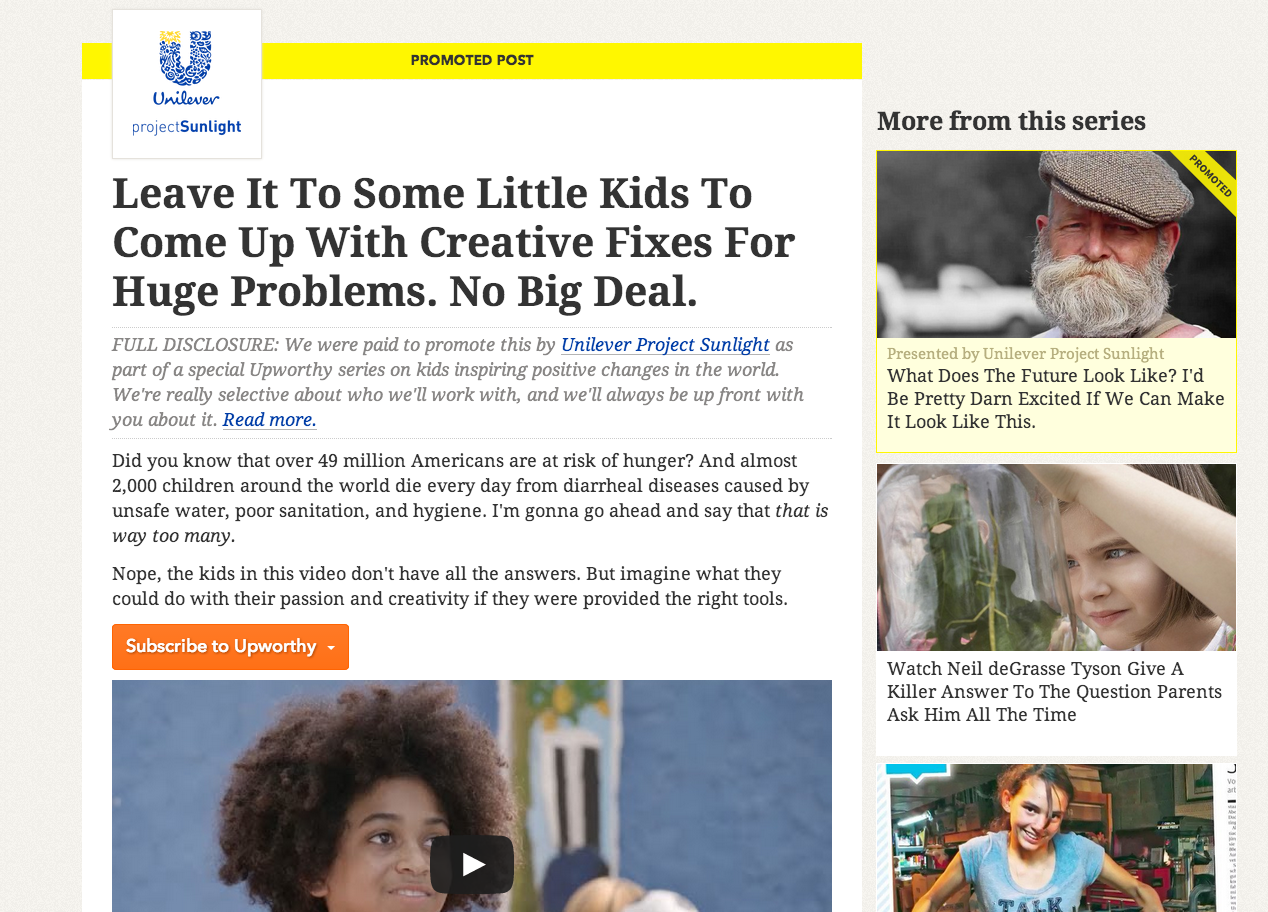 However, the layout changes if a piece of content being promoted doesn’t include a video that was explicitly made by the sponsoring brand. For example, this post in the same Unilever-sponsored series features a traditional Upworthy layout and no “Promoted Post” marker. 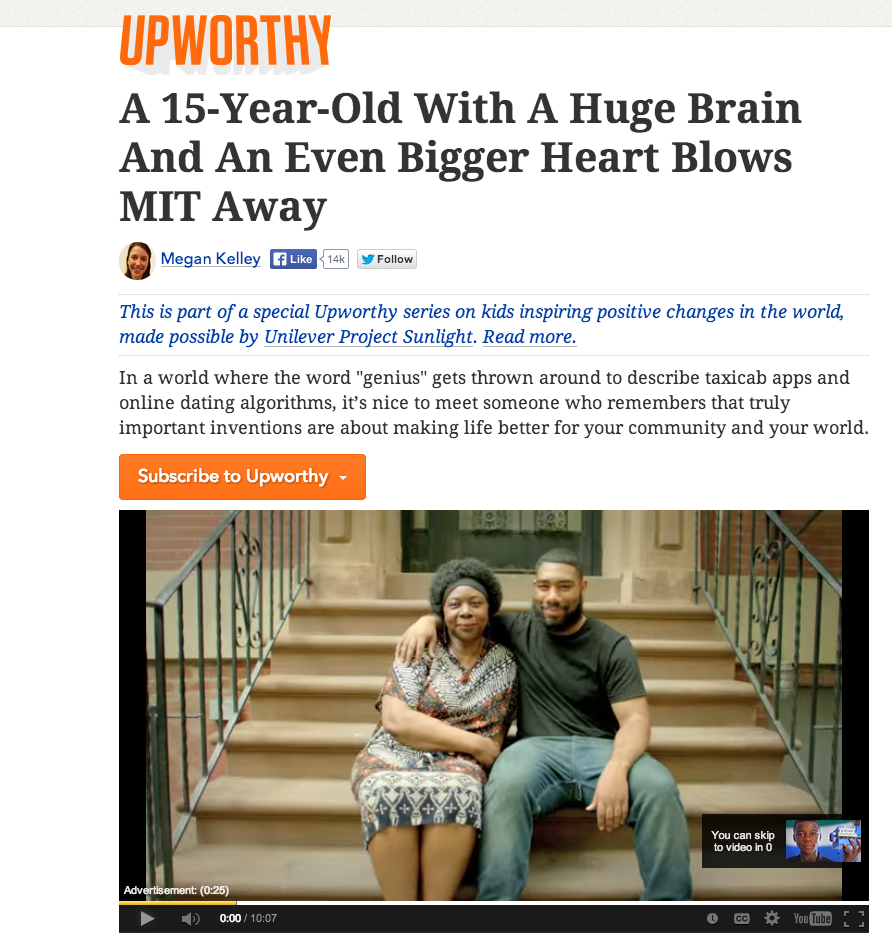 Upworthy seems to only consider their brand-sponsored posts to be ads if the post actually contains a video made by a brand, which is a confusing (and possibly deceptive) distinction. But at the same time, they very clearly spell out their process and strict “no bad guys” guidelines for working with brands in that Read More link for anyone who cares. Based on their success so far, it doesn’t appear that their readers are feeling put off, though it’s still early days and that can change.

What semi-educated speculations can we make about the future of media and marketing from all this?

1. Ultimately, since Upworthy is basically just a brilliantly operated aggregator for inspiring content, they don’t really have any original content standards to live up to—like, say, The New York Times. As long as they don’t start posting documentaries about wildlife preservation paid for by BP, they probably won’t lose their readers’ trust.

2. Sponsored content holds great potential as a source of revenue for publishers, and if you’re a really big fan of people getting paid to make original content, it’s a little unnerving that so-called positivity farms like Upworthy and BuzzFeed are best positioned to make mountains of cash off native ads. At the same time, BuzzFeed is investing some of their profits in original reporting, and if Upworthy can help brands make their documentaries go viral, hopefully that’ll encourage those brands to pay more and more documentary filmmakers to make awesome videos. And maybe Upworthy will actually start creating original content investigating the global issues that they purport to care so much about. Somebody needs to.