If Mark Zuckerberg is a landlord, then Upworthy, one of his most popular publishing tenants, just got kicked to the curb. But like any feisty New Yorker, they’re fighting back.

Upworthy had been thriving on Facebook with their canon of positive, highly-optimized headlines. But then Facebook changed their algorithm to “make sure that the best quality content is being produced, surfaced and shared,” plummeting the traffic of Upworthy and other positivity farms like Elite Daily and UpRoxx. That came to light on Monday, when Business Insider writer Nicholas Carlson created a media firestorm by noting how Upworthy’s traffic dropped from 90 million to 48 million between November and January. It appeared that Facebook had decided there were only so many uplifting stories about heroic dogs that someone can read.

Perhaps while anticipating the attention they’d receive from the drop in traffic, Upworthy revealed a new metric last Thursday, “Attention Minutes,” which challenges the idea that people don’t engage with their content after they click on an Upworthy headline. Instead of relying on a flawed metric like pageviews, they offered some data about how much active time visitors spend on their site. That active time was calculated by looking at “video player signals … a user’s mouse movements … [and] which browser tab is currently open,” according to the company’s blog post.

Though intriguing, the “Attention Minutes” data in the blog post doesn’t reveal much about the amount of time the average user is spending with the site’s content. Attention minutes per visit, for example, would reveal much more about how people are engaging with Upworthy content than would “Total Attention Minutes,” seen below: 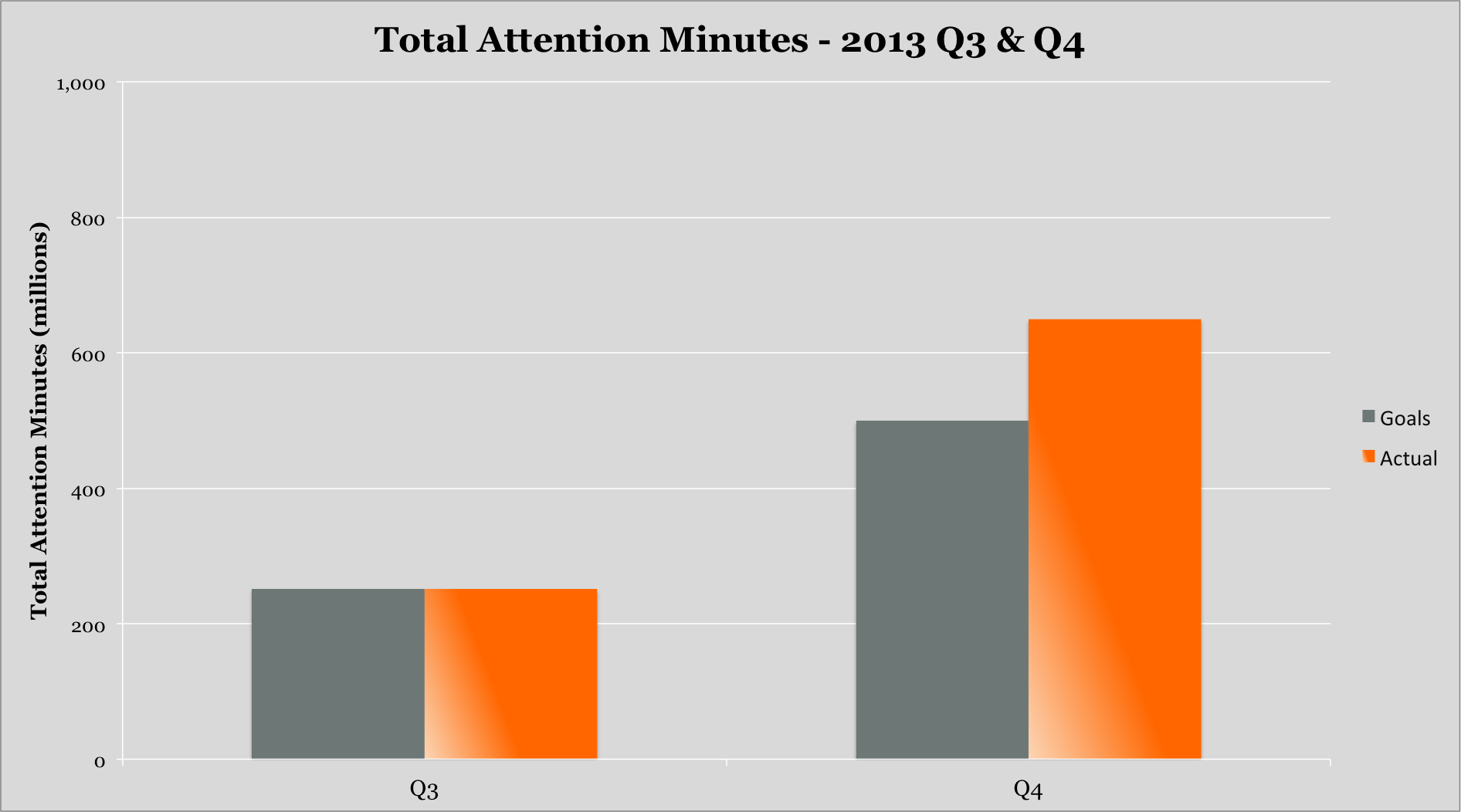 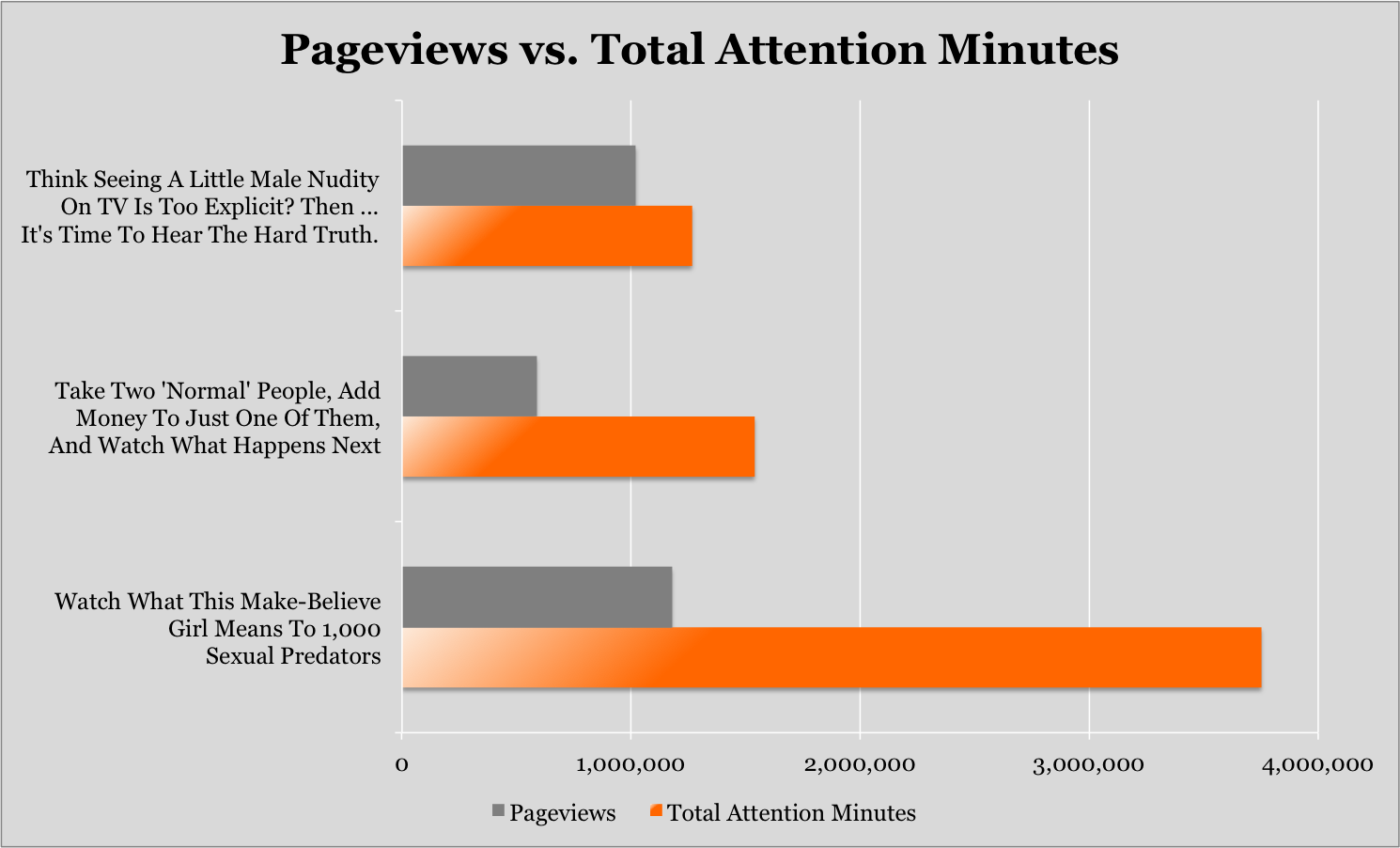 Nonetheless, the metric is a step in the right direction, and it supports the growing argument amongst publishers like Slate, Mashable, and Medium that traditional metrics such as pageviews, visits, and shares don’t truly gauge how much readers are engaging with content.

Instead of measuring how many people arrive, the data measures what those readers are doing once they get there. And that’s what Upworthy is doing here. “[Attention minutes] measures a collection of signals available from APIs, browser information, etc,” an Upworthy spokesperson said via email. “This metric measures real-time activity – if the activity stops, the clock shuts off. That’s a conservative approach, but it also guarantees that actual engagement is being measured.”

Embracing this kind of approach is especially important for brand publishers, who don’t run ad-supported businesses (the primary reason to measure pageviews in the first place).Measuring mouse movement, scroll depth, and, in some cases, heat maps that track eye movement are much more effective ways to evaluate engagement. If all this makes you feel defensive of pageviews, consider that, according to comScore, bots generate an obscene 36 percent of all Internet traffic, so your 1,000 pageviews may really be 640.

The good news for brand publishers? The more the media industry reimagines the way content is measured as a collective force, the faster we’ll find better ways to link content to real business results. (Brand lift is another promising and proven approach.) And Upworthy, for its part, wants to be part of that movement. The spokesperson said that Upworthy “will be releasing more information about specifics in the coming weeks. The company also will make the metric publicly available.”