Companies invest a great deal of time and effort into shaping not only what their products look and feel like, but also the nuances of their brand story and how it aligns with modern social issues and values. After pumping all those resources into marketing, however, it’s not an easy thing for companies to admit defeat, scrap their work, and try something completely new.

Still, sometimes it’s necessary in order for brands to win back their audience or even appeal to new demographics. Here are four brands that did just that.

It’s official: The exclusive, 50-year-old love affair between the condiment formerly known as A1 Steak Sauce and the meat known as steak has ended. In May, A1 released a hilarious Facebook-themed video, “It’s Complicated,” to tell the story of how the sauce decided that it wants to see other foods like pork, chicken, and fish; it also wanted to drop the “Steak” from its official name, becoming simply A1 Original Sauce.

“Created by CP+B LA, the ‘For Almost Everything. Almost.’ campaign will feature the brand’s first TV work in five years, along with digital, social, radio, out-of-home and in-store activations,” MarketWatch reports.

“It’s Complicated” has racked up 1.3 million views on YouTube so far, and it’s definitely worth watching. (We’re still cracking up over “Quinoa likes this.”)

How could we possibly talk about rebranding without tipping our cap to the brand your brand could smell like? Just a few years ago, any mention of Old Spice invoked memories of your grandfather’s medicine cabinet. But then Isaiah Mustafa happened.

Social media marketing got its wings in 2010 when Old Spice released “The Man Your Man Could Smell Like,” featuring the hilarious, shirtless, and totally ripped Mustafa. After the original videos went viral, Old Spice—with the help of Weiden+Kennedy—quickly became the most content- and social-savvy brand around by releasing rapid-fire response videos to fan questions that totaled hundreds of millions of views.

A year later, to keep the momentum going, the brand brought in Fabio to fight “mano a mano” with Mustafa for the Old Spice spokesperson role. In a series of off-the-wall web shorts, Fabio and Mustafa face off in real-time “duels,” again based on suggestions from fans on social media. The series netted more than 22 million YouTube views in one week, while the campaign drew more than 53,000 YouTube comments and 68,000 new Facebook fans, according to Mashable. Just like that, Old Spice had taken hold of millennial hearts for good.

You know who used to drive Buicks? Guys who wore Old Spice. But like Old Spice, Buick has been working to reintroduce its modern, high-tech luxury vehicles to a wider demographic. Sales have been on the rise for the past few years thanks to the launch of these sleekly designed models—and the auto brand’s self-deprecating campaign aimed at attracting younger car buyers.

The 110-year-old company isn’t afraid to experiment on social media either. Last year, Buick invited designers to share their ideas via a contest called “Pinterest to Dashboard,” and the winning pinner, Michael Wurm Jr. (who has 3.3 million followers), was announced at the 2013 New York Auto Show.

Just this past week, GM revealed that the Buick brand had its best sales since 2006 this year, with deliveries up 18 percent from one year ago, including an 82 percent increase in sales of the Encore, its small crossover SUV.

The iconic Mattel doll has been reinvented dozens of times since its debut in 1955, but this latest round of rebranding puts Barbie in the boardroom, using some unique social media promotion and content to fuel the launch of Entrepreneur Barbie. To get fans excited about the new doll, Barbie took to LinkedIn with a professional profile. She also hosted #BarbieChat on Twitter with some notable female business powerhouses to discuss what it means to be a successful businesswoman.

What makes the rebranding campaign innovative is that Mattel has aligned itself with big-name female entrepreneurs, including Reshma Saujani, founder and CEO of Girls Who Code, to share their stories on Barbie’s website, as well as featured content on LinkedIn’s official blog. 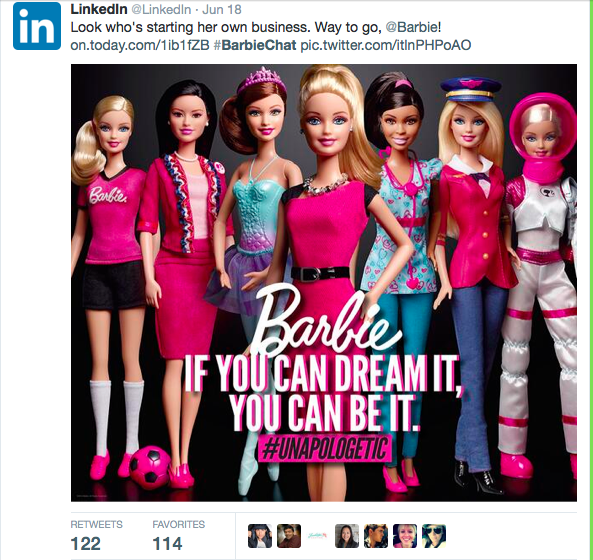 Of course, there will always be the Barbie backlash in which critics question the doll’s unrealistic body proportions and blonde perfection (hence the accompanying #unapologetic hashtag), but females in power positions are trying to share the message that Entrepreneur Barbie and the girls who love her are more than just pretty faces. Mattel’s efforts have also been noticed by many media outlets including Entrepreneur and BizJournal. 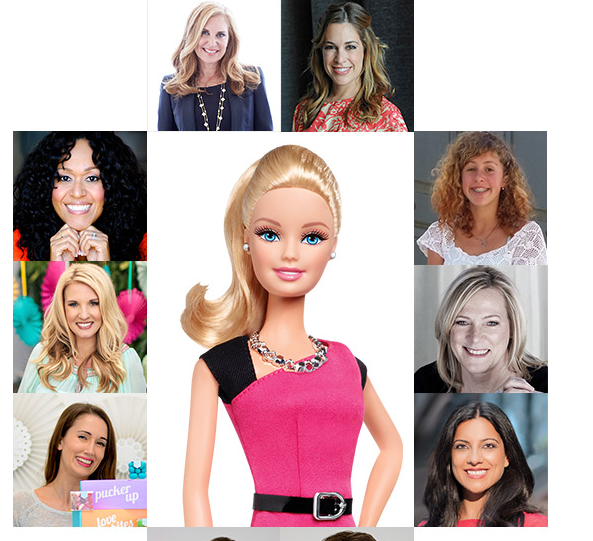 TIME notes that “the whole campaign is part of a larger push to rebrand Barbie as an empowered woman.” It’s only been a couple of weeks so far, but Mattel is hoping that sharing this message of female empowerment might help boost sales that have declined in past years.

Building a long history of brand success is something to strive for, but as evident from the examples above, digital content can transform a brand from old to sexy in a few clicks.

As steak might say, it’s complicated, but sometimes change is good.