For MillerCoors, the best way to capture a millennial male’s heart is through his smartphone—preferably while he’s drinking a beer.

That’s been the theory behind the company’s aggressive content strategy in recent months. Since March, MillerCoors has been rolling out new content partnerships with The Weather Company, Complex Media, AOL Networks, Resignation Media, Spotify, Comedy Central and Funny or Die, theChive, and MLBAM—all in hopes that their desired target might read some MillerCoors branded content while waiting around for his friends at a bar.

“It’s a great opportunity—young men make choices on what bars to frequent and where they hang out with their friends all through their phone,” says Brad Feinberg, the senior media manager for MillerCoors. “That particular environment is extremely relevant. Branded content is a key component of how they’re consuming content.”

True, but does it make sense to invest in sponsored posts on so many different platforms? Feinberg explains that partnering with multiple publications is all about the demographics breakdown between the company’s various beers.

“Each brand in our portfolio has a very specific consumer target that they go after,” Feinberg says. “We chose the publications based on consumer research that we did, as well as research about the markets we’re trying to reach them in.” With this in mind, Feinberg says MillerCoors is pushing its most visible brands onto these different channels first and will follow with newer and lower priority brands later.

“Each brand has a core consumer that we’re trying to attract and create relevancy for,” Feinberg says. “For an existing brand like Coors Light that’s been around for a long time, we needed to be able to create relevance for the 24-to-27-year-old millennial male. We looked for partners digitally that’ll gives us the opportunity that traditional advertising might not achieve in its own right. A 24-year-old male wants to share with his friends.”

In one example of a partnership, MillerCoors joined up with AOL Networks to create the BrewPub Newsroom, a content channel that will include videos, service pieces, slideshows and listicles.

The BrewPub Newsroom will pick up social conversations among their target audience and turn it into content. “Building content around the World Cup and general entertainment news in real-time has powered some awesome content for BrewPub,” says Jay Wardle, AOL’s regional sales director. 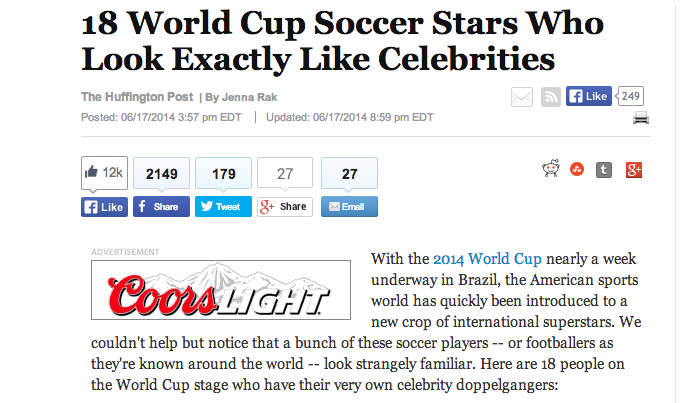 In another one of its content partnerships, MillerCoors tapped Complex Media—a publication known for showcasing urban influencers and helping brands create content—to create a content program for Coors Light and Miller Fortune. This summer, hip-hop artists Big Sean and Curren$y will be creating new tracks on behalf of the beers, as well as behind-the-scenes videos that can be watched on Vevo.

“We were able to partner with key celebrity talent,” Feinberg says. “They are able to showcase the brand in a very relevant and authentic way.”

In order to measure the content’s success over a variety of platforms, Feinberg says they’re combining publisher-provided data with third-party insights.

“We’re getting publisher-reported data and we have other reported sources,” Feinberg says. “Adobe Social is one of the tools that we work with. We work with demographic modeling and other research tools to create a story and track performance.”

The best indicator of impact for the brand, Feinberg says, will be either time spent on the site or social shares, along with brand sentiment, which the company will determine independently. “We do ongoing brand tracking to measure key drivers and look for things that our target demographic identifies with, like ‘brands’ and ‘brands that get me.’ It doesn’t get down to one particular partner per se, but we look at all those things drive KPIs.”

In the end, for MillerCoors it all comes back to doing their initial homework before partnering up. Says Feinberg: “Part of it is just intuitively aligning with partners and celebrities that we know are relevant based on the research.”